The Craft, at the end of the Victorian age 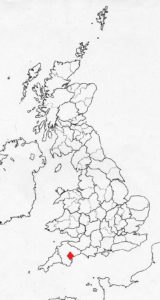 As seen by Mr Arthur Kelly…

In an article entitled Thatching in Devonshire, which appeared in the then newish magazine, Country Life in October 1901, Arthur Kelly recounts a journey, mostly it seems by steam train, along a long forgotten line. The course of which the modern A382 mainly follows; up the valley of the River Teign and into eastern Dartmoor. Many of the thatched buildings he saw, have survived. Allowing us to see what changes a century and more, have brought, in this part of Devon… 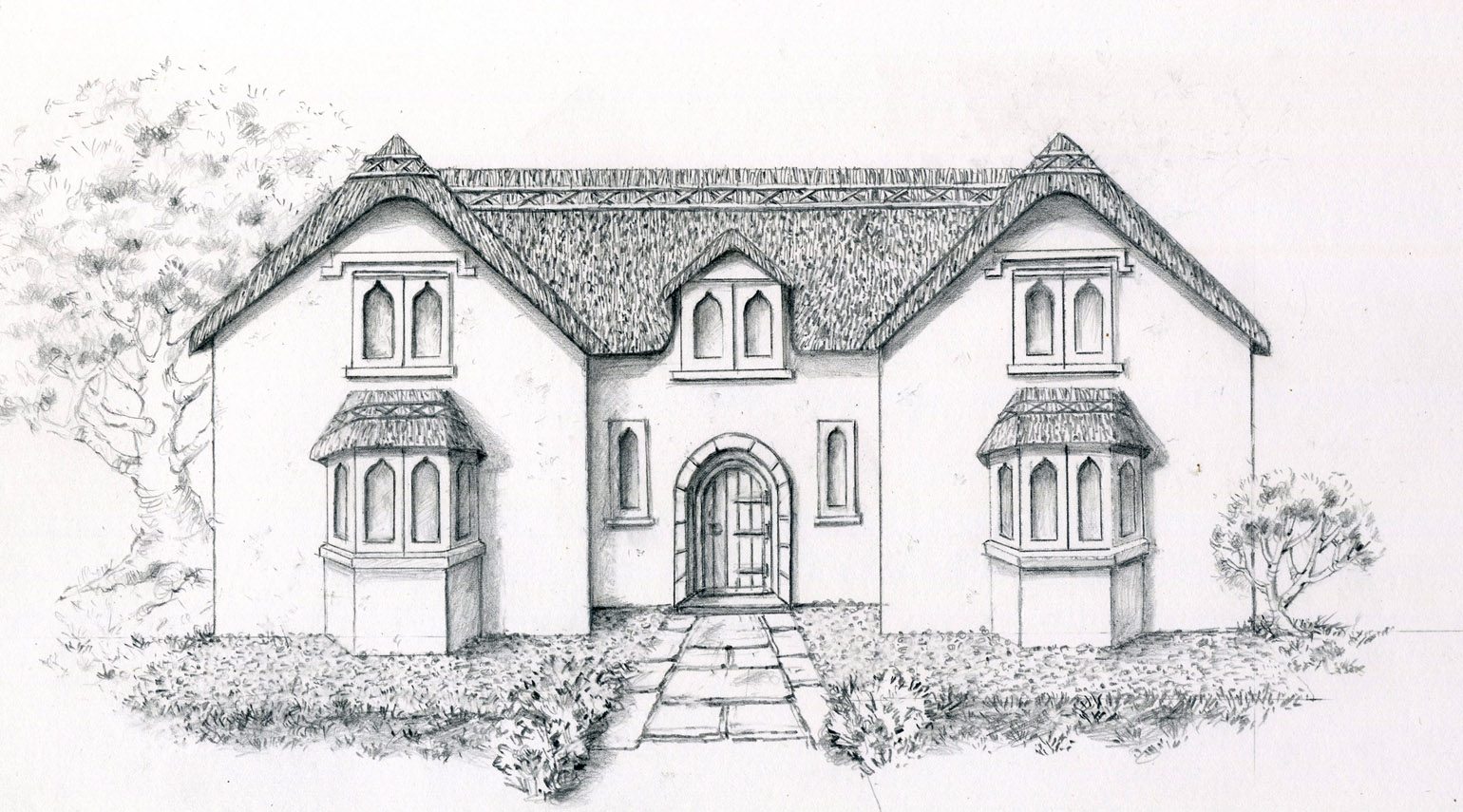 Gothic Thatch… At Kingsteignton. Built for the vicar in the 1820’s, in the fashionable Cottage Orne style. Impressing Arthur Kelly eighty years later. Still thatched, but much altered…

On the east side of the River Teign, he found the village of Kingsteignton. He noted that ‘…much of the village is under straw eaves…’. Now much larger, it still has a score or so of thatched buildings tucked away. Including the thatched vicarage, that caught Arthur Kelly’s eye.

Moving north, Mr Kelly left the railway and negotiated some very narrow lanes, to Hennock. The attractive buildings that Mr Kelly photographed have lost their thatch but the village still has a few others. The large Rectory is covered and the Village Hall sports a coat of combed wheat reed. 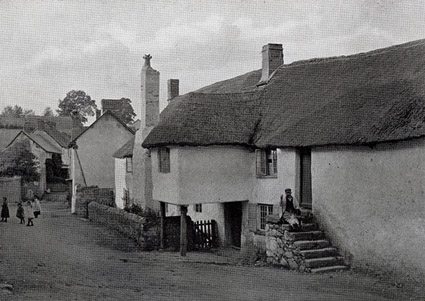 As seen by Arthur Kelly… His photo of Hennock depicts a large combed wheat reed thatch; that no longer exists. But the porched building itself still stands.

Devon is a major source of combed wheat reed and Arthur Kelly noted it’s preparation; in an age, just before the mechanical reedcomber came into general use. Stating that ‘…in out of the way districts….the sheaves are thrashed with the flail…then combed with a comb six or eight inches long…’ This is combing by hand, dating from time out of mind. However today, even in it’s heartland, combed wheat reed is under pressure, from the ever encroaching water variety. Mr Kelly’s next port of call shows this all to well.

When walking around the Wreyland area of Lustleigh, the modern visitor will see as much thatch as Arthur Kelly did. Old pictures and new appear to show little change. But all coatwork is now in water reed. Today’s thatchers have cleverly retained the traditional shapes and flush ridges, fooling even the trained eye, from a distance… 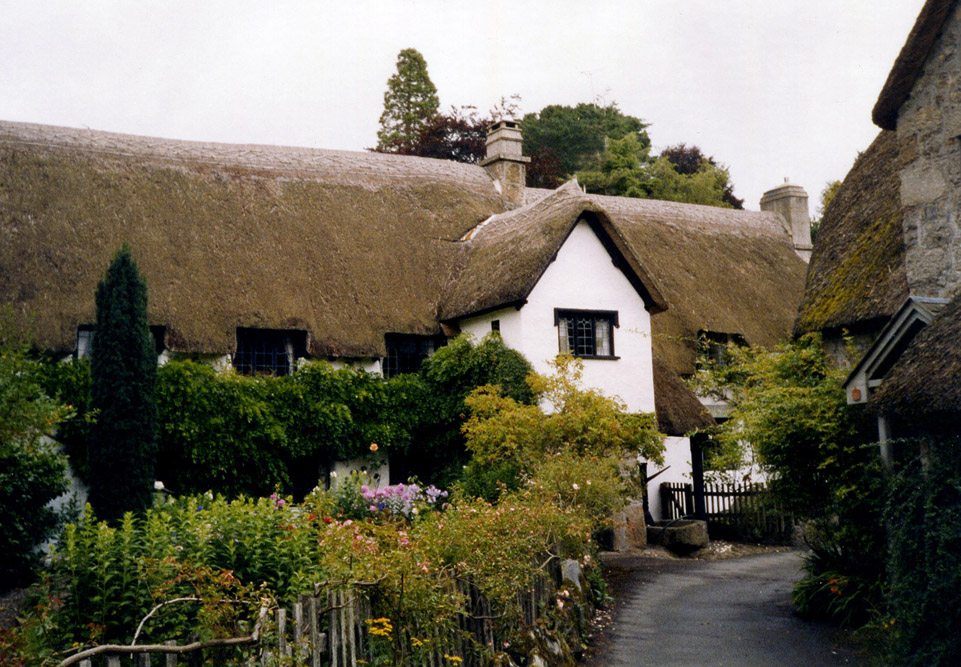 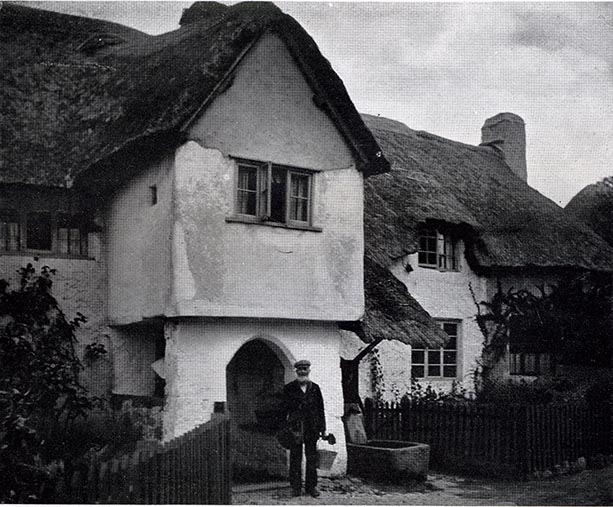 Wreyland… In Arthur Kelly’s picture, all the thatch consists of combed wheat reed. With the gardener to add perspective to the image. The modern scene shows a roof of water reed, looking very similar. The double storey porch has a date stone of 1680. The main building being a century older… 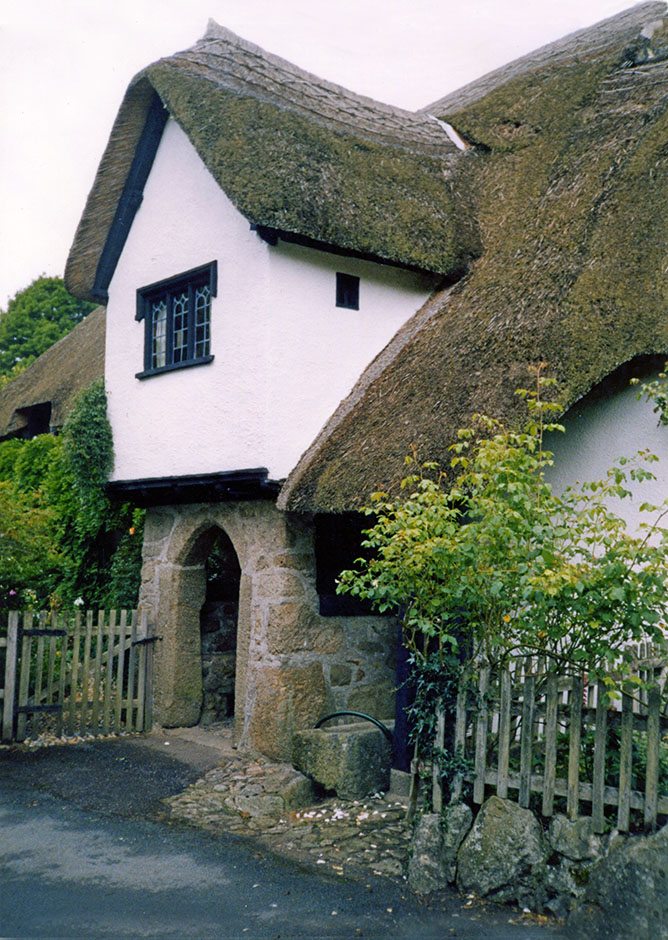 Here, our man got into conversation with the locals, some of whom were surprised that he admired the thatching on one house. But had to admit the owner liked living under thatch and that ‘…if you were to offer to patch up this house for her with nice clean slates, instead of the old mossy thatch, she wouldn’t allow you…’ The bystanders also bemoaned the fact that thatchers were hard to come by, ‘…they come for a day or two and are then off to the ricks..’. Thatching ricks, of corn and hay, always paid better than covering houses, according to more than one old thatcher I’ve met… Mr Kelly recognised the hard life, of his generation’s thatchers, ‘…miles may be walked before a penny is earned, the work often being so far away…’ And heard of the dangers; ‘…the ladder may slip, and the man…taken up for dead. …the effects being felt for years…especially during certain changes of the weather…’

But it seems that some thatchers earned nothing and a great deal of effort went into stopping them doing any sort of travelling at all. ‘Fine work…is done on the farm by the convicts at Princetown, as there is no need to worry about overtime…‘ This Mr Kelly states, was the position at Dartmoor Prison! The mention of work ‘on the farm‘, suggests rick thatching; rather than work on more substantial buildings. Time has robbed us of any offical details, of the quite intriguing prospect of some convict thatchers; nearly all the prison’s records being lost in a mutiny in 1932. But confirmation of Arthur Kelly’s statement comes from a newspaper, closely dating to his time hereabouts… ‘’ATTEMPTED ESCAPE OF A CONVICT. While three convicts in charge of a warder were on Saturday working on Dartmoor Prison farm thatching a hay stack one of the men made off from behind the stack. His absence was, however, soon discovered, and he was captured in the direction of Tavistock after an hour’s search.’’ From The Evening Express , 26th August 1901 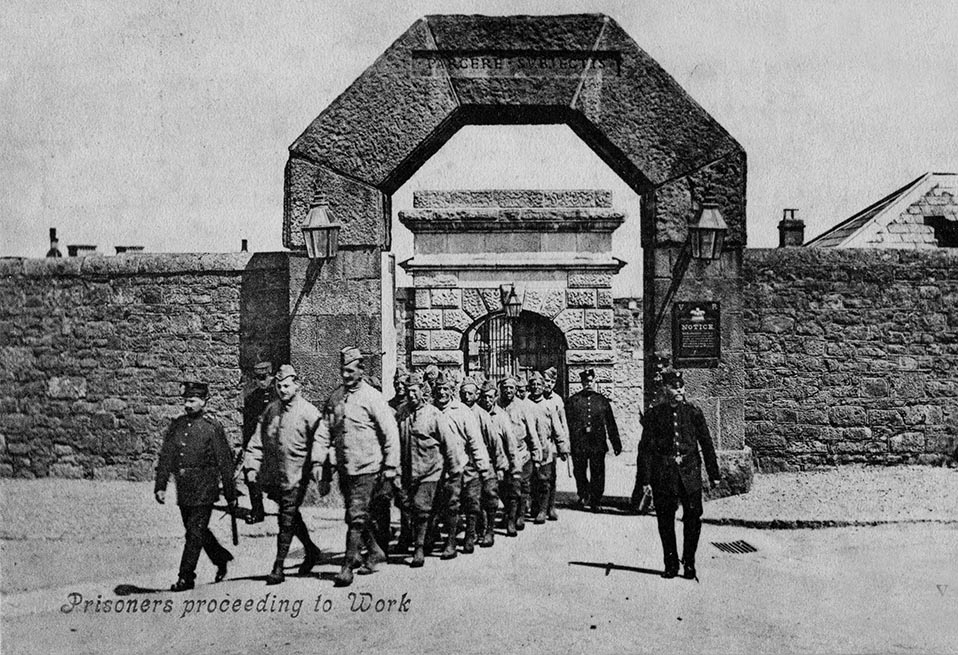 Off to work we go… To the prison farm and some rick thatching? A scene from H.M. Prison at Princetown, in Arthur Kelly’s day….

Arthur Kelly’s travels, now lead him to Moretonhamstead. In this village, Mr Kelly saw the thatched ‘Poor House’, which still stands today; under a coat of wheat reed. But it has lost it’s attic windows and the eight almshouses are now two. The town still has many attractive thatched shops and houses. 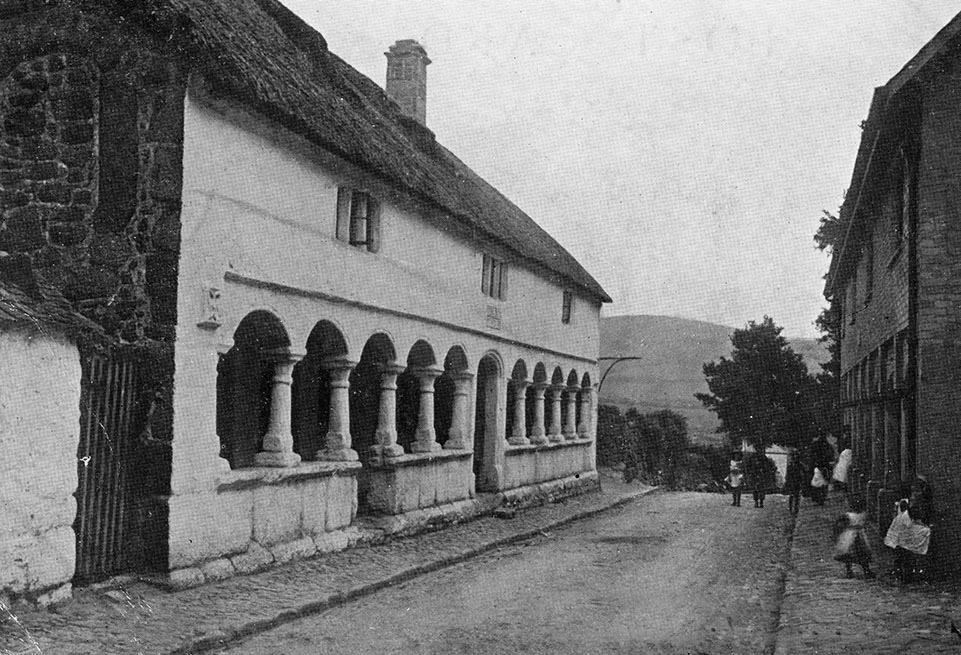 The Poor House… Above, in an Edwardian image. Dating from the medieval period, this fine building is now in the care of the National Trust. Still fulfilling it’s role as tenanted housing. Being one of nearly thirty or so thatched buildings, in this parish. 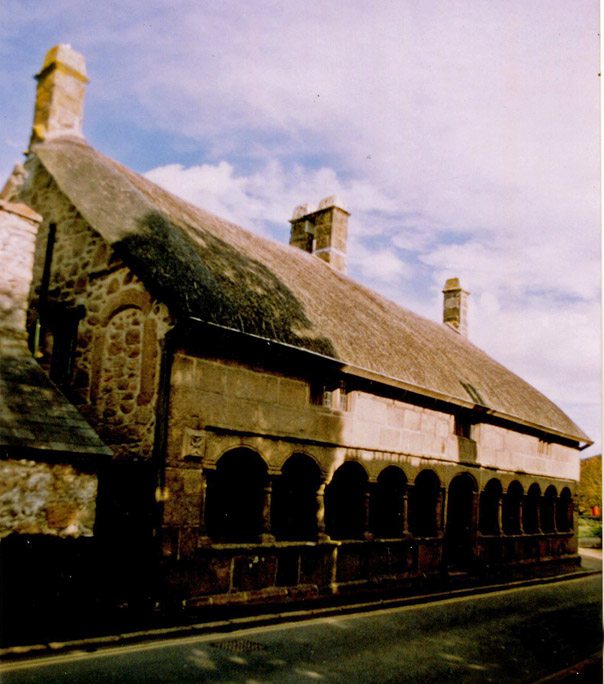 Moretonhampstead was the last station, on the railway our man probably used. But his final stop was a little further north, at Chagford; a small town with a long history. The ‘whole street’ of thatch has lost some roofs but much remains; including a thatched bank… 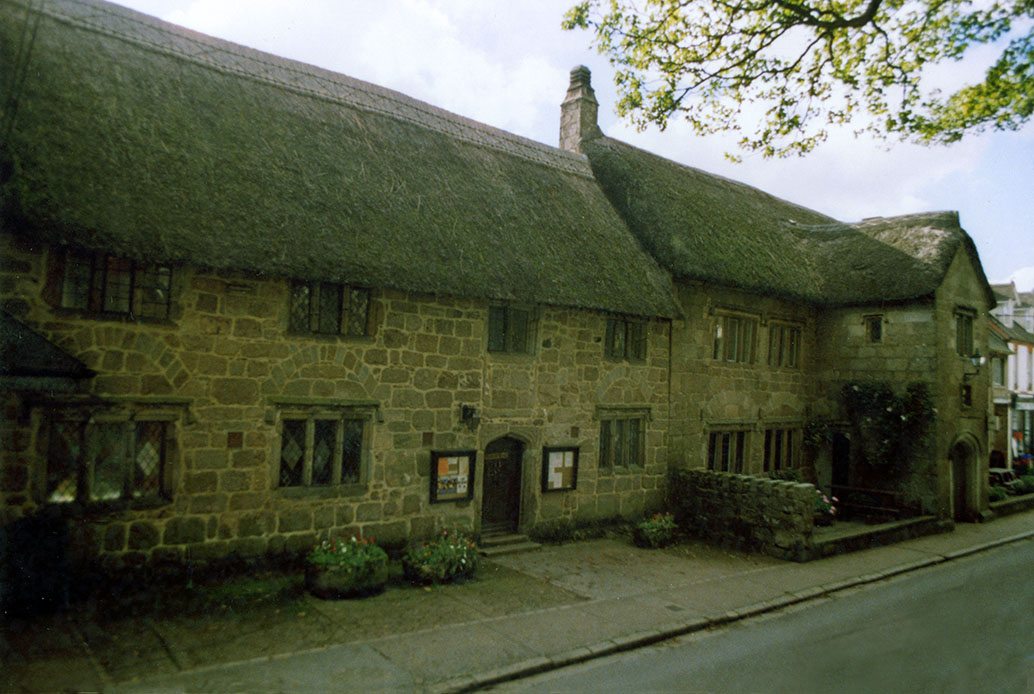 Chagford… Over a hundred thatched buildings lie hereabouts. Including some in the town centre. This long row of buildings, opposite the church, date from the Tudor period. The left hand side was once the guildhall of St Catherine, founded here in 1200. 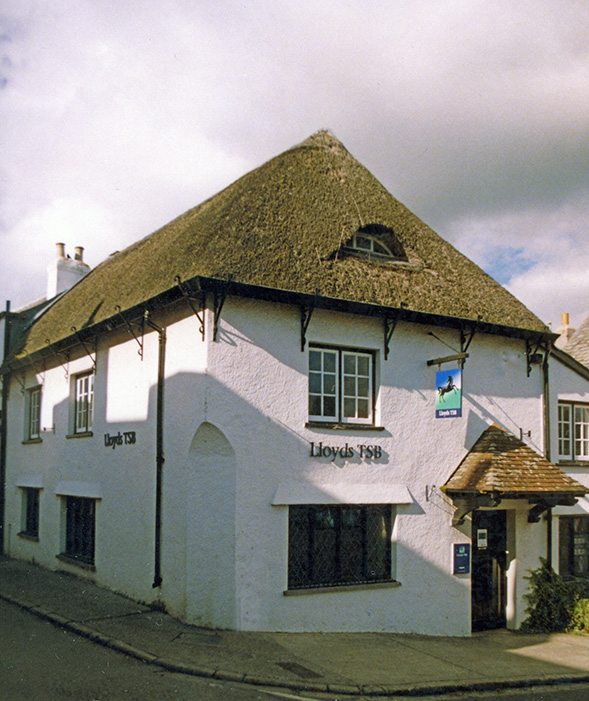 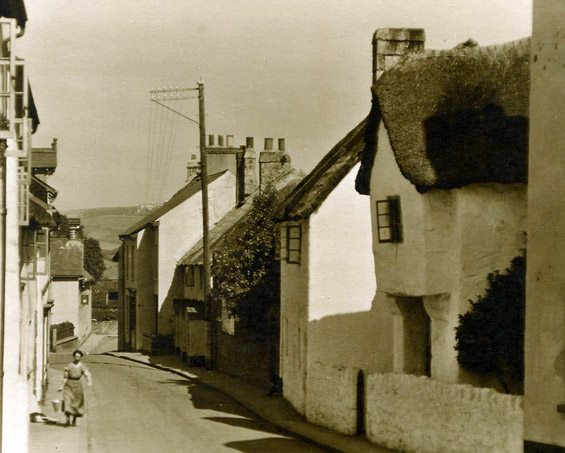 The thatched bank and a 1920’s image of Lower Street. The house on the left in this image, with the double storey porch, has Tudor origins; and is still thatched, as seen below. With the combed wheat reed being replaced with a water reed thatch… 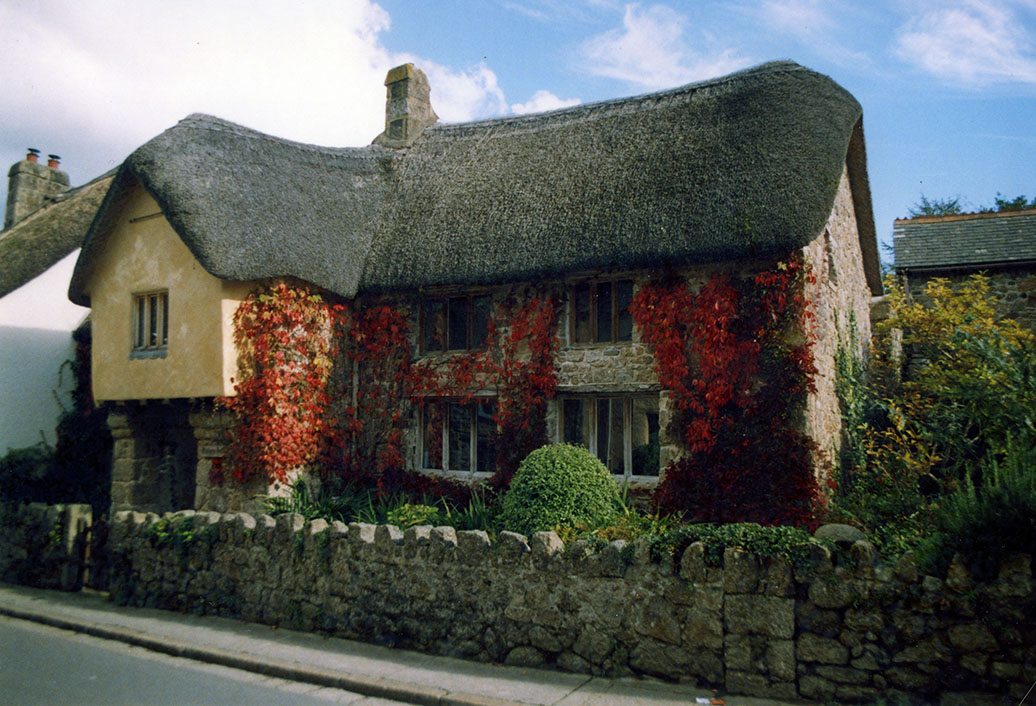 Many things in Devon are still as Arthur Kelly described them. Roofs measured in 100ft squares; watering any wheat reed to make it pliant, and fixing the latest coat of thatch with spars. But that coat may well be now of water reed; something not seen in his excursion. But the lifespan he quotes, for local roofs, has a modern ring ‘…twenty five years. If ‘fore sunned‘… longer if ‘back sunned‘..’. The morning, south facing side, still gets a lot of Devon rain. Some things never change… 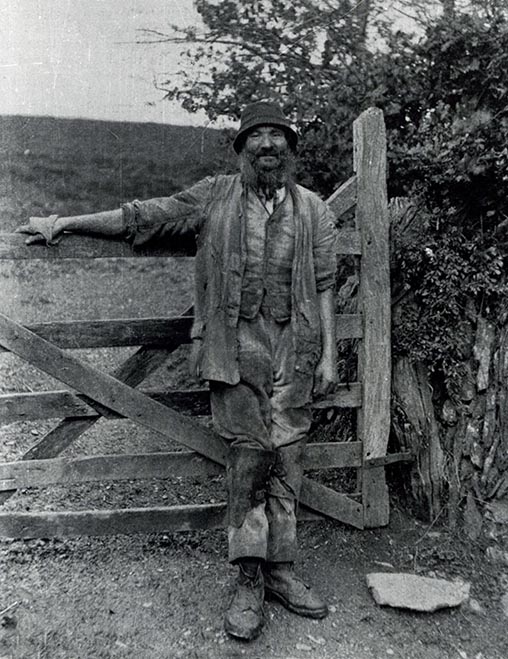 To the Editor of Country Life.

Sir, After reading the illustrated article entitled ‘Thatching in Devonshire’… it occurred to me you might consider the enclosed photograph of a Devonshire thatcher, which I took when in the south part of the county recently,… As there are but few men now following this trade, their services are eagerly sought by farmers and others in the surrounding district, and it is often necessary for them to make long journeys to and from their work, and for this purpose the man whose portrait is shown utilises a donkey; he is quite an institution for several miles around the neighbourhood in which he lives. He has just descended his ladder, and is surveying the progress made with his work during the day. His working attire, with leather knee-pads, and shields for protecting the right hand when pushing in the hazel ‘spears’ which secure the thatch, are clearly depicted.
M.L.N., Badminton