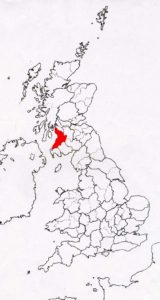 The fame of Robert Burns as a literary genius, has never dimmed in over two centuries, since his death. Many buildings associated with him have been preserved; cherished down the years, as other contemporary structures have disappeared; especially thatched properties. Now nearly all the thatch, that seems to be left in Ayrshire today, is that with a Burns connection…

The thatching materials used in his time, were either oat or wheat straw, fixed on to a turf base. These were either sparred on or stobbed into position. Turf, also forming the most common type of ridging. As we shall see, the poet would have had a good knowledge of thatch and its dangers.

There are five preserved, thatched buildings associated with the poet, mainly in and around the town of Ayr. They are in the care of several organisations; all welcome visitors. The most famous, Burns’ Cottage, lies in the suburbs at Alloway. 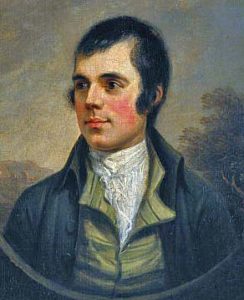 This cottage was built by Burns’s father, in 1757. It was a typical But and Ben dwelling; with the family at one end and their animals at the other. The walls are of clay. The original roof would have consisted of branches and brushwood; thatched over in a local style. As well as building his new home, the poet’s father would have almost certainly roofed it. Professional thatchers were almost unheard of, in this area, at this time.

Robert was born here, in January 1759. The growing family moved on in 1766, the elder Burns selling his home, to the Incorporation of Shoemakers, from Ayr. They turned it into an ale house. It soon became a very famous one; as the poet’s stature grew. Keats and Wordsworth both paid their respects here. The last ale house customers leaving in 1881. The cottage was then returned to its original state; as it remains to this day. This humble dwelling, of clay and thatch, is an extremely rare example of an eighteenth century, smallholder’s cottage. 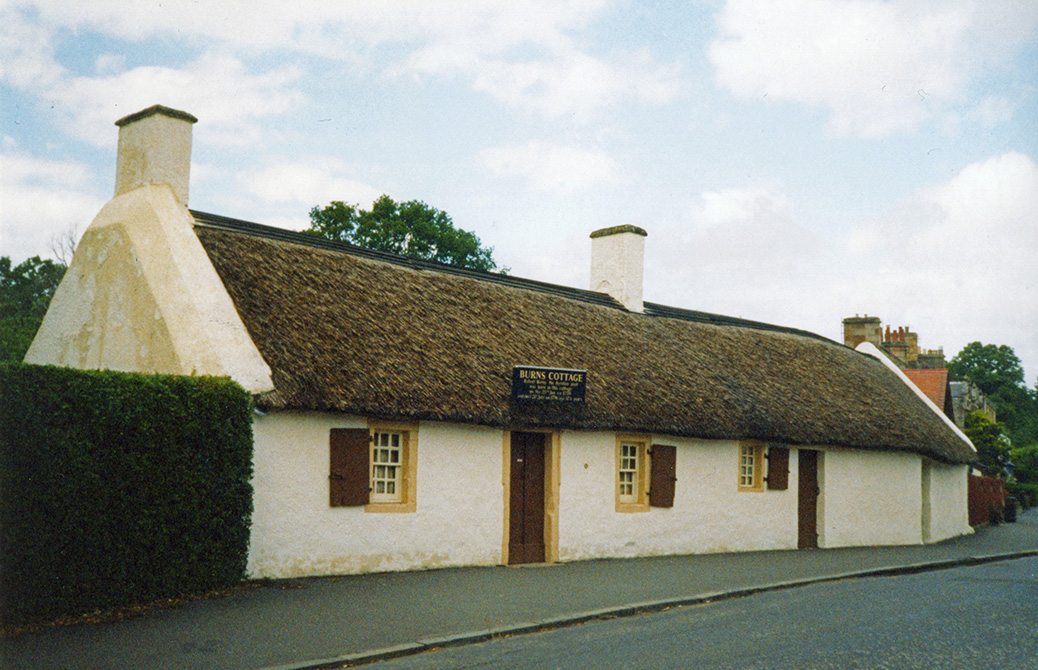 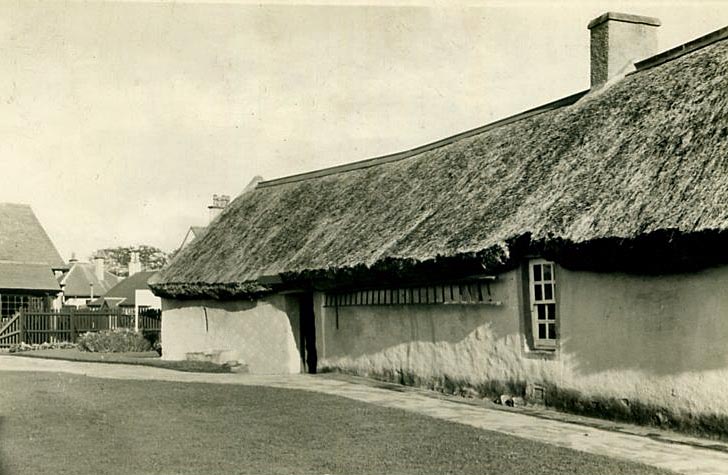 Tourist attraction… Today’s thatch, in the top image, consists of a stobbed straw roof. Probably the type of thatch, applied by Robert’s father. The lower image from around 1950, shows a thick roof of straw, on the rear of this famous dwelling…

The image below shows the cottage as the former pub, when an ’A. Ritchie’ held the licence. Perhaps dating from the 1860’s. A mossy straw roof covers the building, topped with a timber ridge. The gent in the highland dress, no doubt earned a few pennies guiding the visitors. Earlier images show a turf ridged roof. 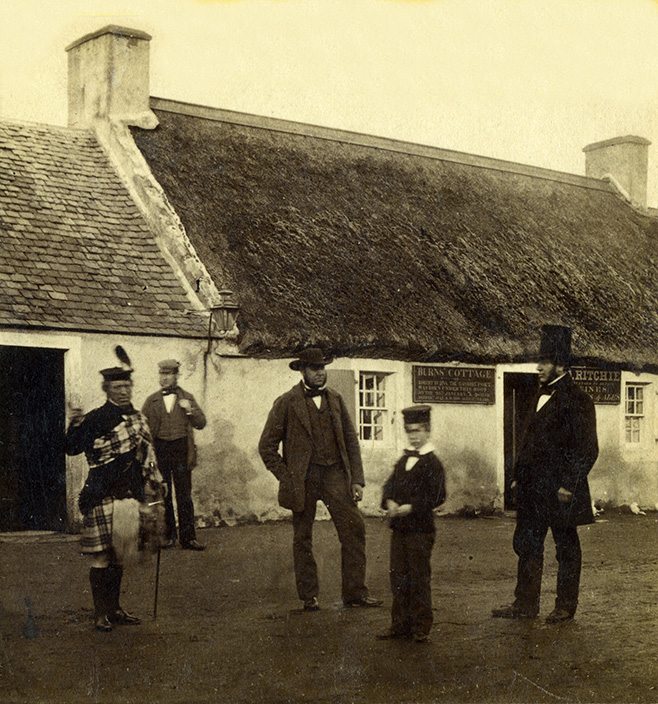 To Robert’s father, the next parish always held better prospects, the family moving on to the thatched, Locklea Farm, in Tarbolton. Here, in 1780 with a group of friends, our man help set up The Bachelor’s Club. The meetings being held in the upper room, of John Richard’s ale house; the rules were strict, no swearing or bad behaviour. Only threepence could be spent on drink; but included a toast: ‘to our mistresses’. The tavern eventually became houses, by 1930 it was in a poor state, facing demolition. The National Trust for Scotland, then stepped in, restoring Robert’s meeting room, to a state he would probably recognise. 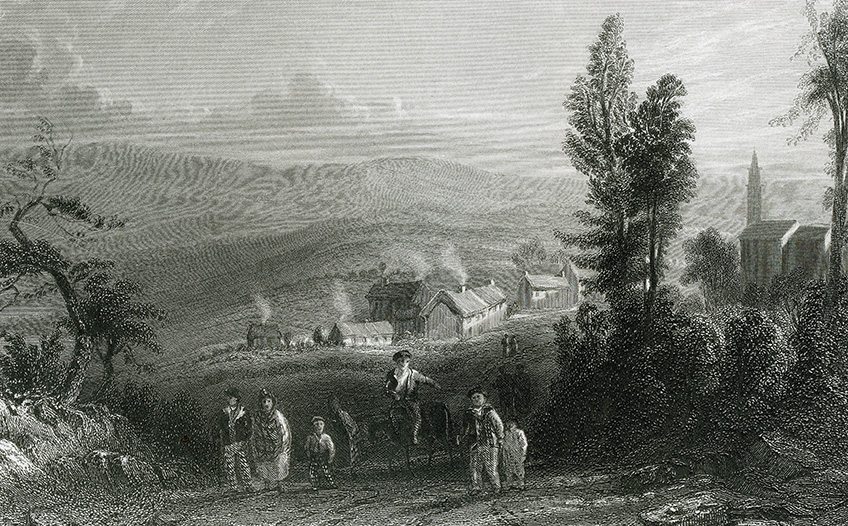 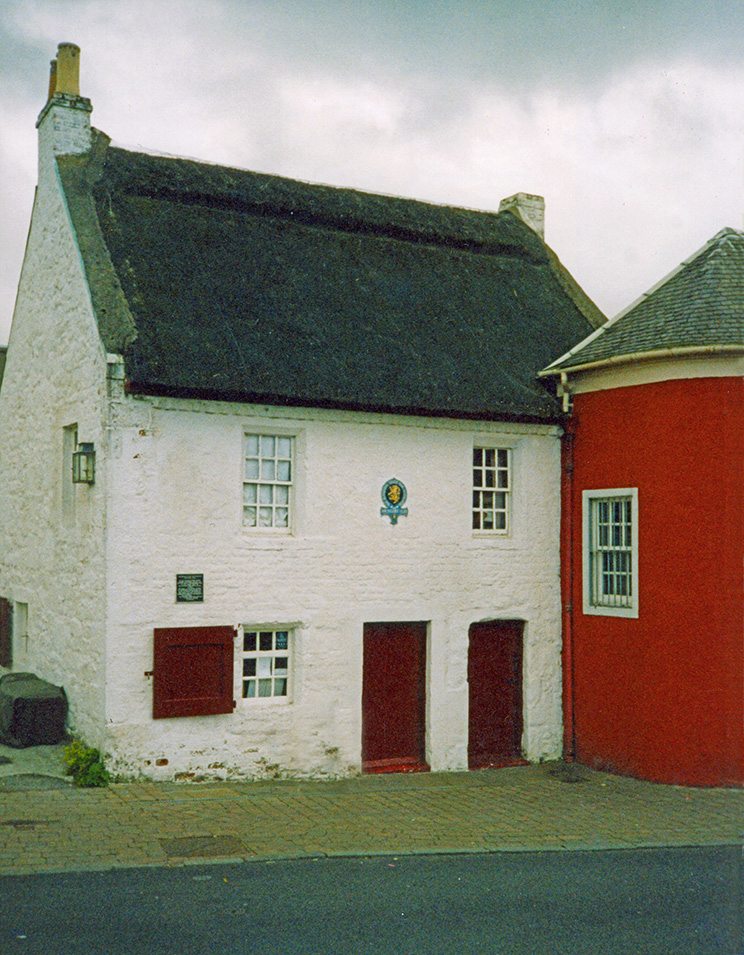 Tarbolton… Half a century after Burns’ time and still full of thatch. And John Richard’s Ale House; one of the first properties, saved by Scotland’s National Trust.

In June 1781, the budding poet moved north; to the port of Irvine. His uncle had offered him a partnership, in his flax dressing business, situated in the Glasgow Vennel area of the town.

The prospects were better than the reality. For six long months, Robert spent twelve hours a day heckling (combing), flax. And he no doubt looked forward to the New Year’s party, to be held in the thatched heckling shed. It must have been quite a do, his aunt supped well and not to wisely; knocking over a candle into some dry flax; soon the whole building was on fire. This first hand experience, of the dangers of thatch, put paid to Robert’s heckling days… 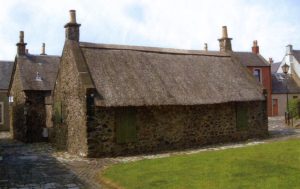 The heckling shed remained a ruin; as over time this area of Irvine became run down. But as ever, restoration replaced demolition; due to the poet’s fame. The scene of the fire has been rebuilt; giving this part of Ayrshire, its only thatched building

In 1786, in debt and in trouble with a pregnant girlfriend; Robert considered emigration. But how to raise the nine guinea fare to Jamaica? Friends persuaded him to publish his work; the famous Kilmarnock edition being the result. He became, what we would call an overnight sensation. The girlfriend became his wife; the trip to the West Indies forgotten.

Three years later, it was suggested he write a ‘witch tale‘; to accompany a book on Scottish antiquities. The result was, Tam O’ Shanter, one of his most famous works; and the saving of two more thatched buildings.

By tradition, written in single day; the tale begins in a pub, in Ayr that now bears the poem’s name. This still retains its thatch; being one of a very few thatched pubs in Scotland. The main characters of the story, were based on the real inhabitants of Kirkoswold; Robert’s mothers parish. Shanter Farm is long gone; but the home of Souter Johnnie, or John Davidson, the shoemaker; still stands. This is a fine example, of a common type of building found in the north of Britain. A single storey, terraced cottage. To find one thatched, today, is rare indeed. The shoemaker had this one built, in the1780’s, now it is in the care of Scotland’s National Trust… 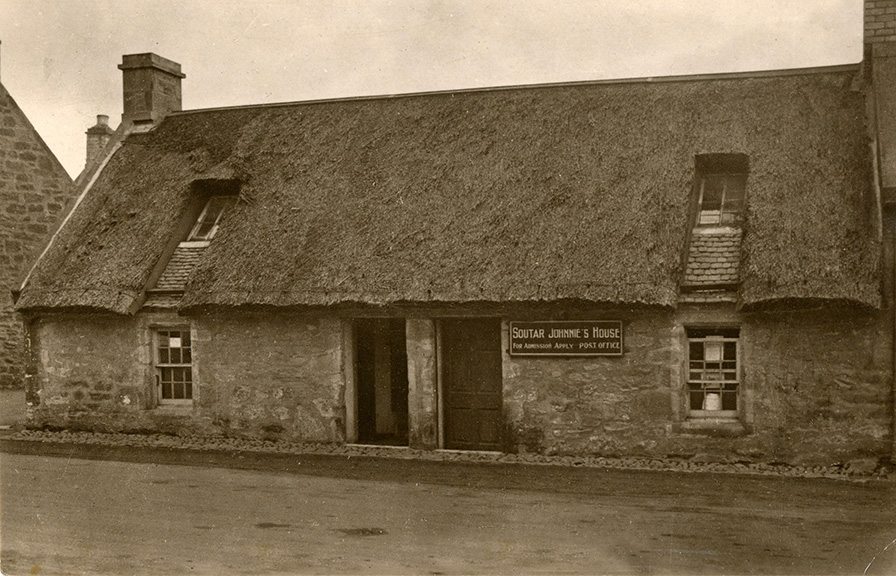 Souter Johnnies…This old image shows, non original, upper windows. These have now gone. As the shoemaker, or souter; only had a dark loft to sleep in. He and Burns were friends, and the poet almost certainly visited here. The cottage remaining the shoemaker’s home, until 1806. The modern thatch, is examined in the Technical section, on ridging… 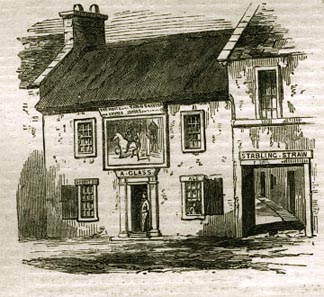 The Tam o’ Shanter Inn… Still a lively town centre pub. The above image is taken from the Illustrated London News, marking the centenary of Burns’ birth, in 1859. The photo opposite is from around 1890; dipicting a neat thatch of Tay reeds. A stobbed thatch s being carried out below in around 1947. The modern roof is oncemore of Tay water reed, topped with turf. 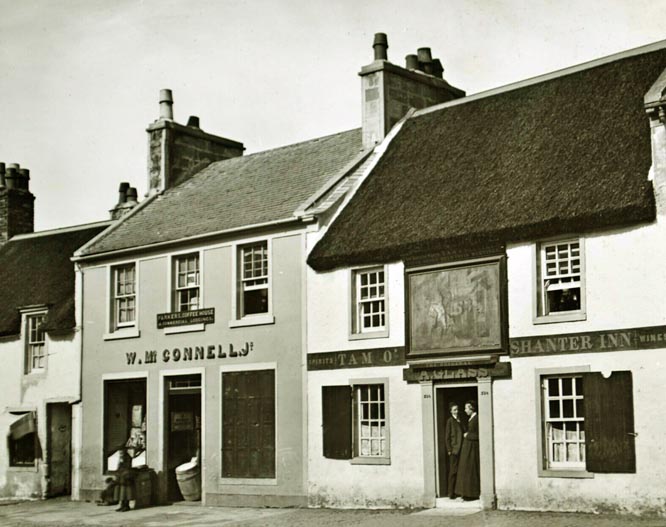 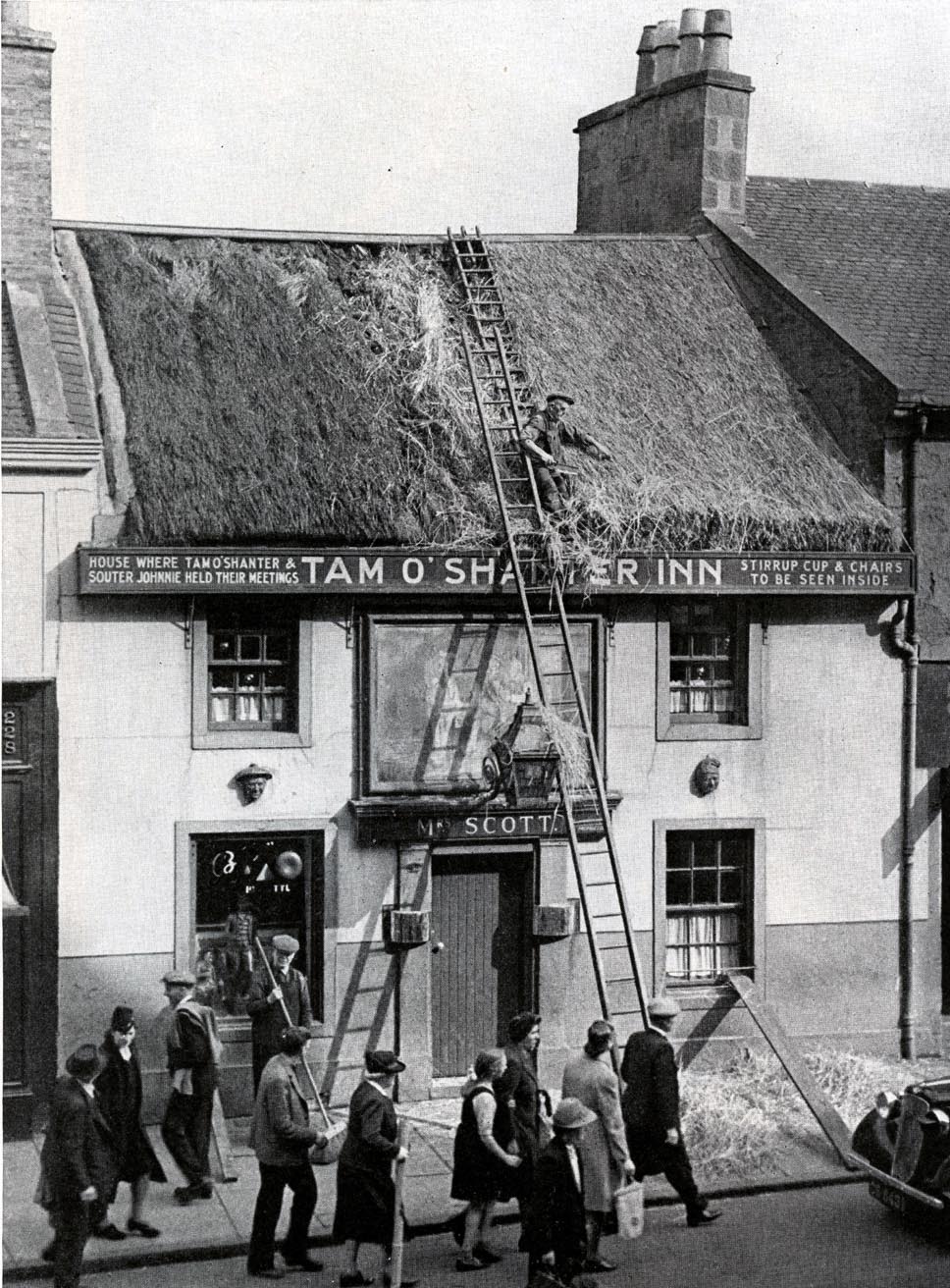 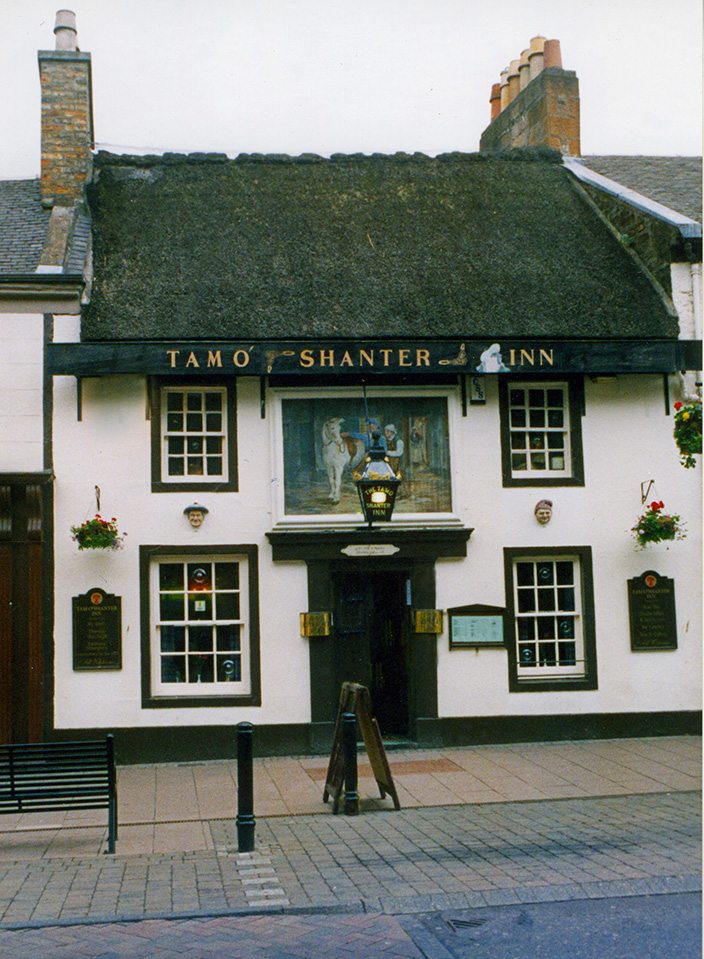 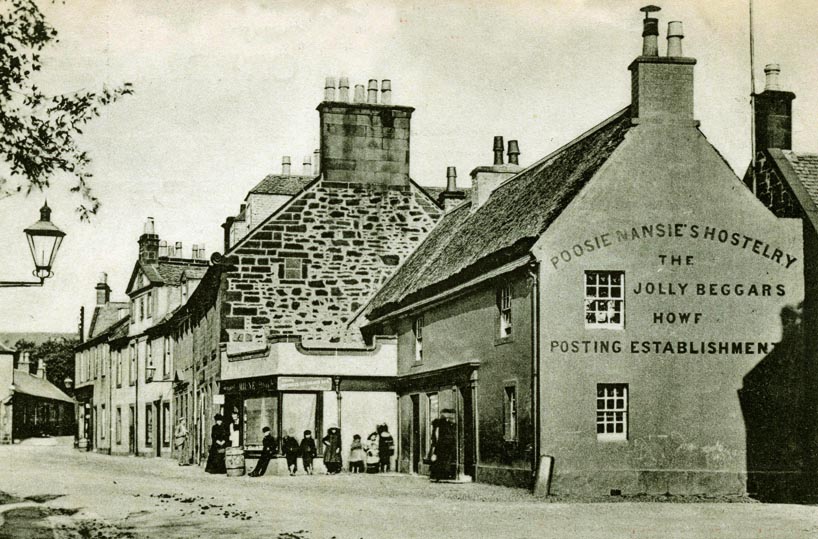 Another pub, another tale… Burns’ well known work ‘Love and Liberty’, often called ‘The Jolly Beggars’, seemingly had its origins in late night visit to Poosie Nansie’s inn in Mauchline. Inspired after ‘witnessing much jollity’ in a group of beggars… Written in 1785 but not published in his lifetime; being considered ‘much too licentious’… Agnes Wilson a servant at the pub; is said to have the ‘tozie drab’ referred to in Robert’s work… She appears in the Mauchline Kirk Session records of March 1786 ‘as being of lewd and immoral practices’ and was ‘haunted and entertained by… George Gibson’; the landlord of Poosie Nansie’s. Unlike the Tam o’ Shanter this inn lost its thatch; in the mid 1950’s; the roof then consisting of thick layers of straw.

Robert Burns died young in 1796, famous but never rich. His birthplace became the scene of the very first Burns Night, in 1801. Some friends gathered and toasts were drunk to his memory. He would surely have approved, as no candles were knocked over… 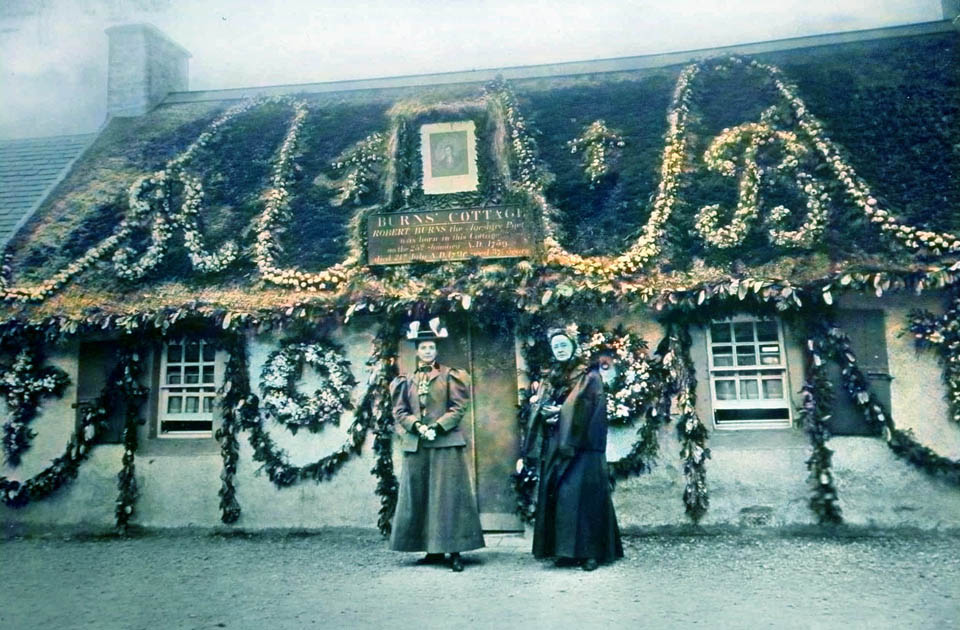 A century on… The highly decorated thatch above, on the poet’ birthplace, was created as part of the 1896 commemorations of Robert’s death. His great granddaughter a Miss Hutchinson stands on the left, with Robert’s granddaughter, Annie Burns on the right… The thatch at this time consists of cereal straw in good condition. 1996 saw similar decoration…

Not only did Robert’s fame save thatched buildings, in recent years it has created some… 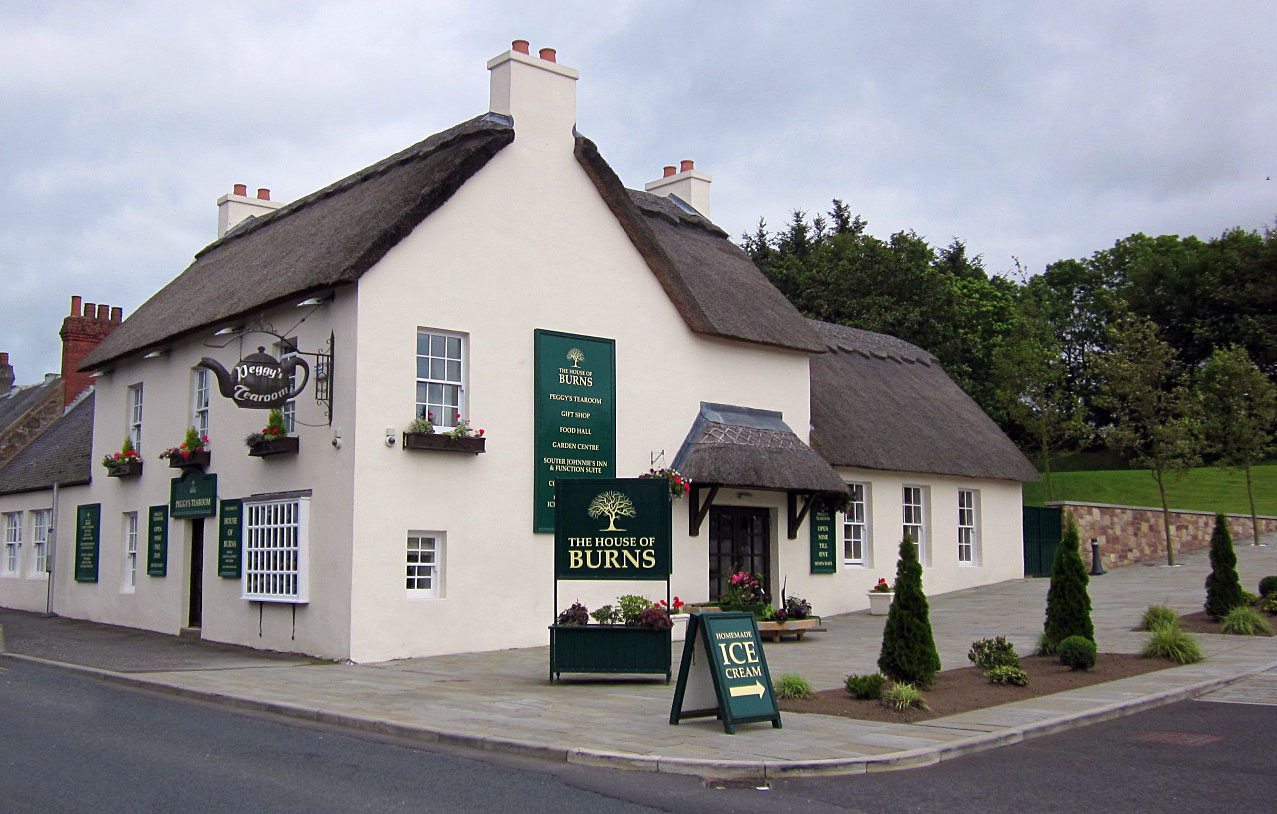 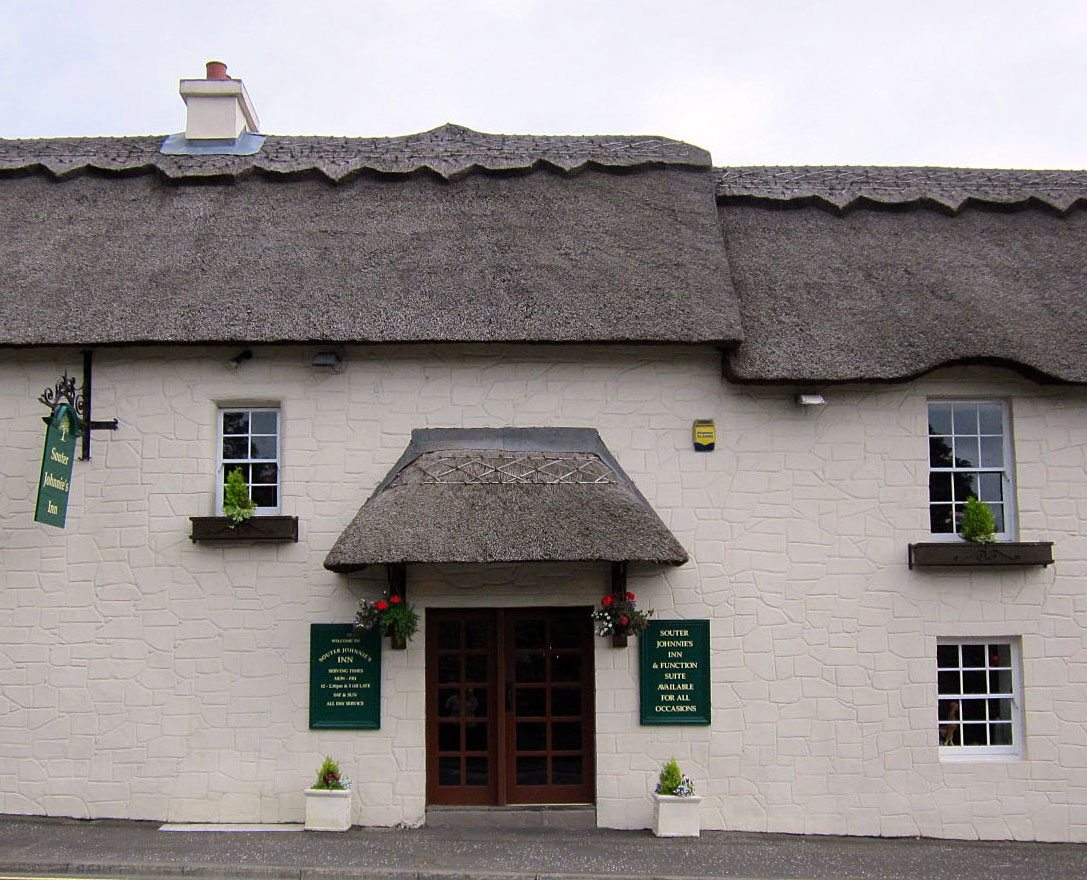 New build… At Kirkoswald. This recently-built tea rooms and neighbouring ‘Souter’s Inn’, no doubt rely on the stream of visitors hereabouts… Photos; copyright & thanks, Billy McCroriea, under creative commons licence.