Thatching in The South Western Lowlands 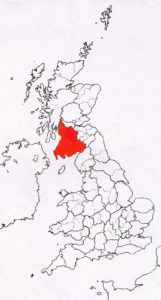 The historic counties of Wigtown, Kirkcudbright and Dumfries, lie in the south of this area. Dunbarton, Lanark, Renfrew and Ayrshire are in the north. Fairly standard work, following the Northern tradition is used here. But often it is accompanied, with some outside fixings. Which can be useful, when the wind blows. In even more exposed coastal spots, with fewer resources, Highland thatching methods once held sway. 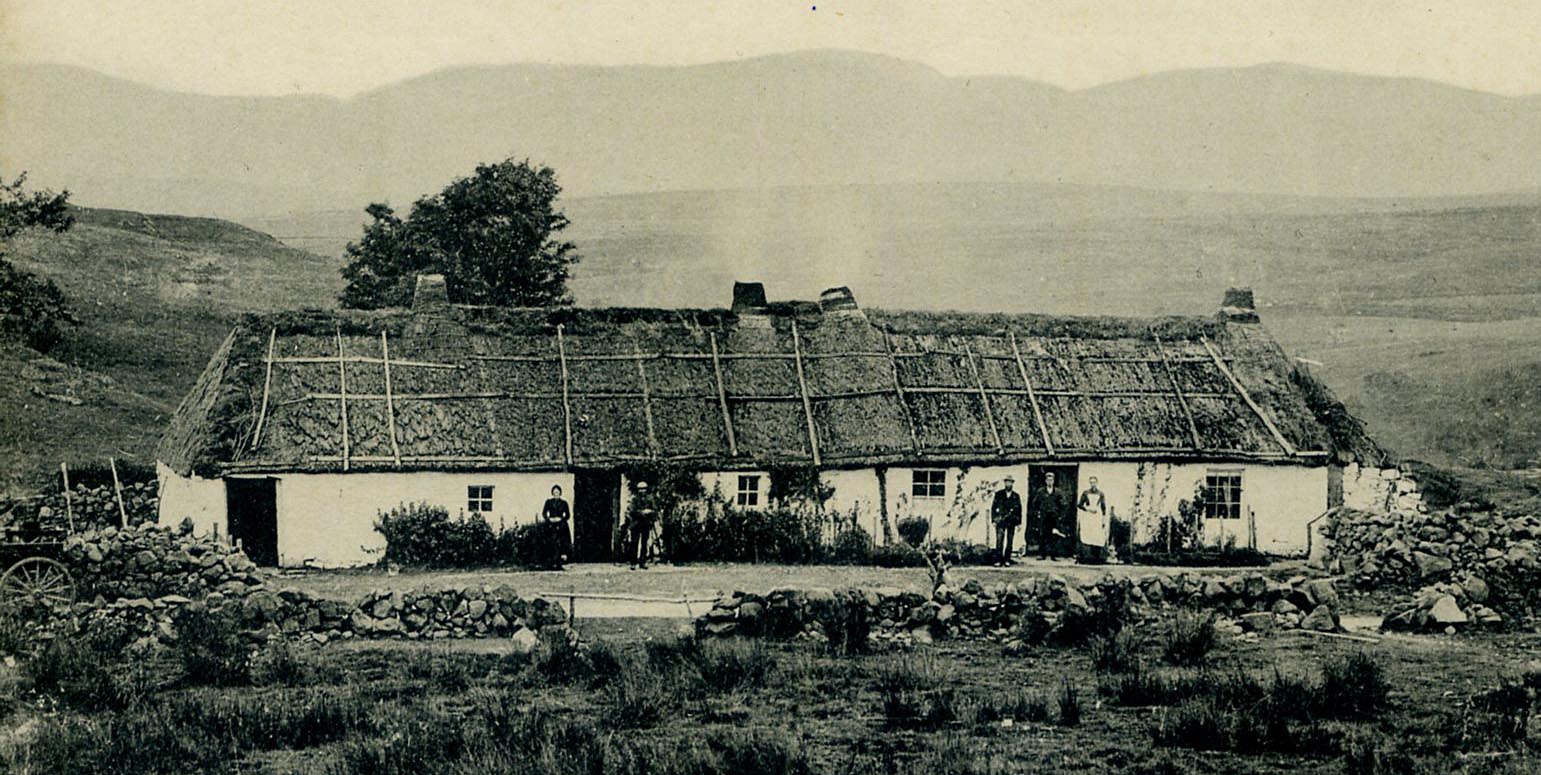 Tranquil times… At Knowehead, in the old county of Kirkcudbrightshire. However, a couple of decades or so before this group assembled; one Tom Hunter, whose home was in right hand cottage; had spent the night on this thatch roof… Holding things together, during the Great Storm, of late December 1879. The night of the Tay Bridge disaster. Tom didn’t take any more chances with his thatch; as it now shows a heavy caber frame, as extra fixing.

In the past, the usual wide range of materials were used, in these south west counties but straw remained the most common thatch. It covered most dwellings in Renfrewshire, according to the Agricultural Report of John Wilson, in 1812 and was being stitched on with twine, in Dunbarton in the 1790’s. Back in Renfrew, Mr Wilson noted the local thatcher’s wages. ‘Thatching per sq yard, with straw supplied.‘ paid three pence in 1795 and was fifty per cent more 1809. But suitable straw had doubled in price in the previous thirteen years, to two pound ten shillings per ton.

Turf was used as a base, a ridge and a fixing; often being laid on top of each course of coatwork. The weight of which, enabled the thatcher to fix the course, using a lot less spars… 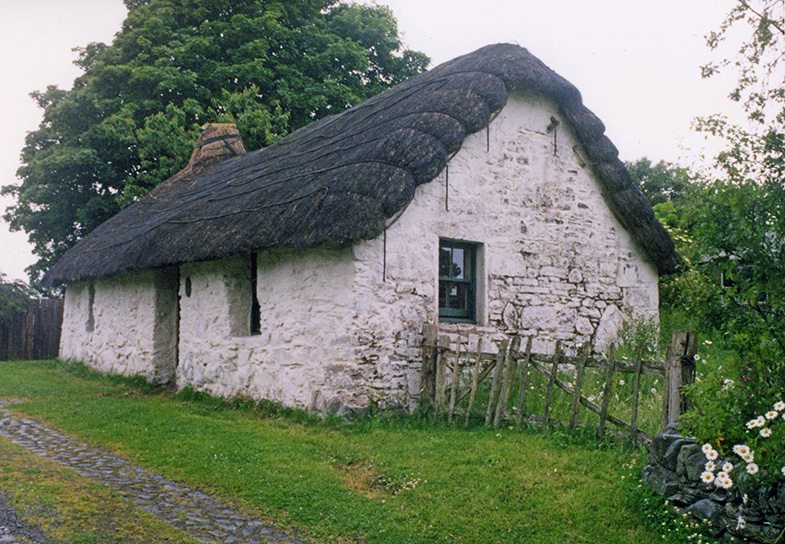 Rarity… Apart from this ‘Cruck Cottage’ at Torthorwald, near Dumfries; most of the thatches, left in the area, are on buildings associated with Robert Burns. The poet’s often rather close association with the craft, follows on in the next page. (Robert Burns and Ayrshire’s Thatch ) This old cottage, was renovated with a long straw roof on a turf base; with some horizontal roping, for extra fixing. All resting on a Cruck framed roof. Below an Edwardian image of Mouswald, a village lying a few miles south of Torthorwald. The thatch shown here has the same curves, as the newer roof but no roping; with turf, as well as straw ridges. 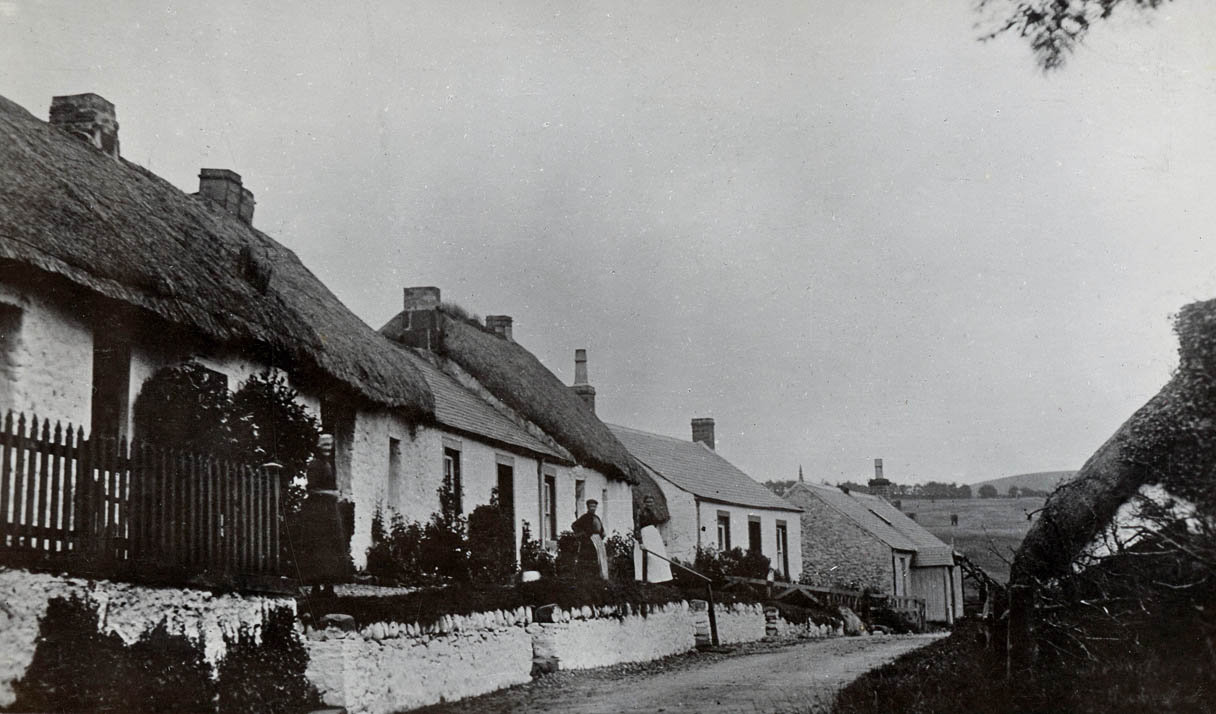 A local newspaper noted a shortage of thatchers, ninety odd years ago, at Hillowton in Kirkcudbrightshire. Here a local was spotted thatching his cottage; known as ‘Dolefu Donal’, he was being helped by his wife; ‘Mournfu Mirren’. (They both evidently cheered up when full of whisky!) She was handing up: ‘whithies and scrass’. That’s willow spars and probably bundles of marram grass. Passers-by were warned by Mirren, not to kick Donal’s ladder away. As he was: ‘the last o’ the thaikers’; and it would be a tragedy if he fell off…

Professionals… Seventy years or so before the achohol fulled work of ‘Dolefu Donal’ and his wife, noted above; an Ayrshire thatcher, based in Kilmarnock issued his invoice… As is clearly seen below, the thatching was carried out for a Mr Brown, likely landlord of Mr F. Teates. The thatcher, Peter Mc Quade seemingly used the stobbing method, to fix the ‘3 thraves & 8 sheaves’ of straw; as there is no mention of any thatching spars, to be used as fixings. (A thrave contained 24 sheaves) Alternatively he may have made up some spars, from wood supplied by Mr Brown, as he took six and half days to thatch in 80 sheaves of straw; which seems a slow rate of work. The ridge was probably of turf. Peter Mc Quade appears in census’ from 1861 onwards. Being born around 1815; he’s a ‘Master Thatcher’ in 1861, living in Croft Street, Kilmarnock. Over the next two decades his two step-sons, John and William Meikle, also appear as ‘house thatchers’. Thus it seems Peter had quite a large business, by around 1881. The 1853 invoice shows that he was literate, if only to write his name; as the bill may have been prepared by Mr Brown. Peter received two shillings and sixpence (a halfcrown) for a day’s work; not a great amount, considering Dickens had Scrooge paying his clerk Bob Cratchit the same amount, a decade earlier… 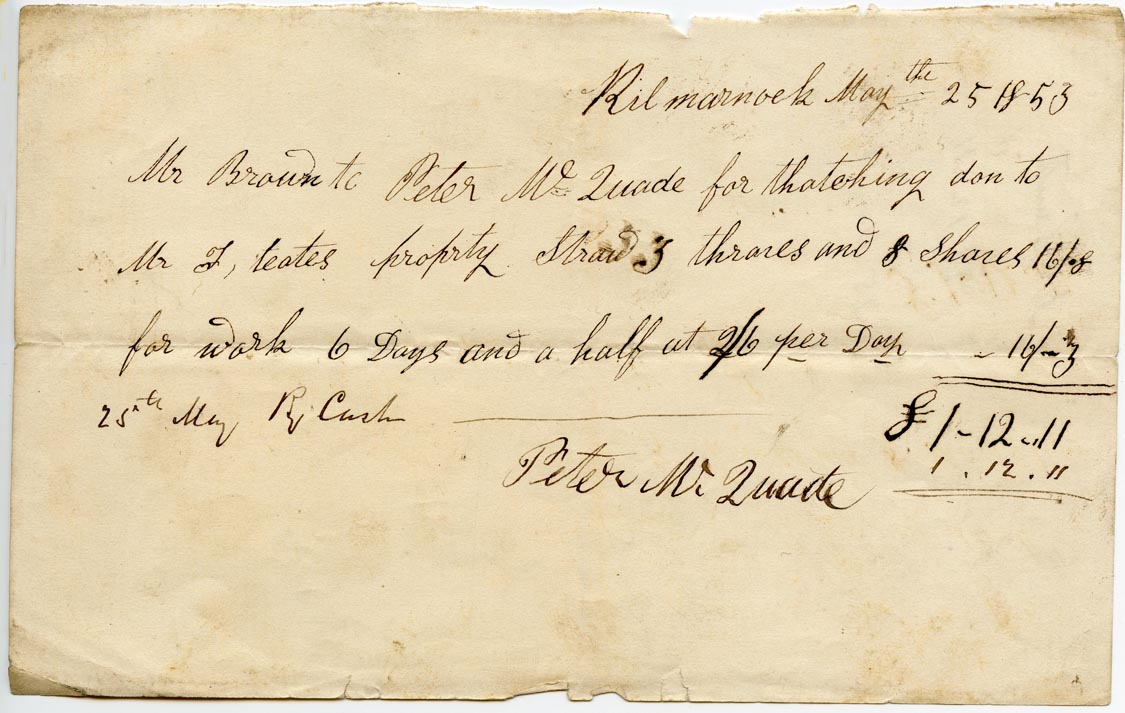 Picturesque Ayrshire thatch… ‘Lady Jane’s Cottage’, near Killwinning. Built in the ‘Cottage Orne’ style, for Jane the daughter of Hugh Montgomerie, 12th Earl of Eglinton. In 1811 it was described thus… ‘”Near to the gardens, in a remote corner, more than half encircled by the river, a remarkably handsome cottage has been reared, and furnished, under the direction of Lady Jean Montgomery, who has contrived to unite neatness and simplicity, with great taste, in the construction of this enchanting hut. That amiable lady, spends occasionally, some part of her leisure hours, about this delightful cottage: viewing the beauties, and contemplating the operations of nature, in the foliage of leaves, blowing of flowers, and maturation of fruits; with other rational entertainments, , which her enlightened mind is capable of enjoying.” It fell into disrepair and was gone by 1930… 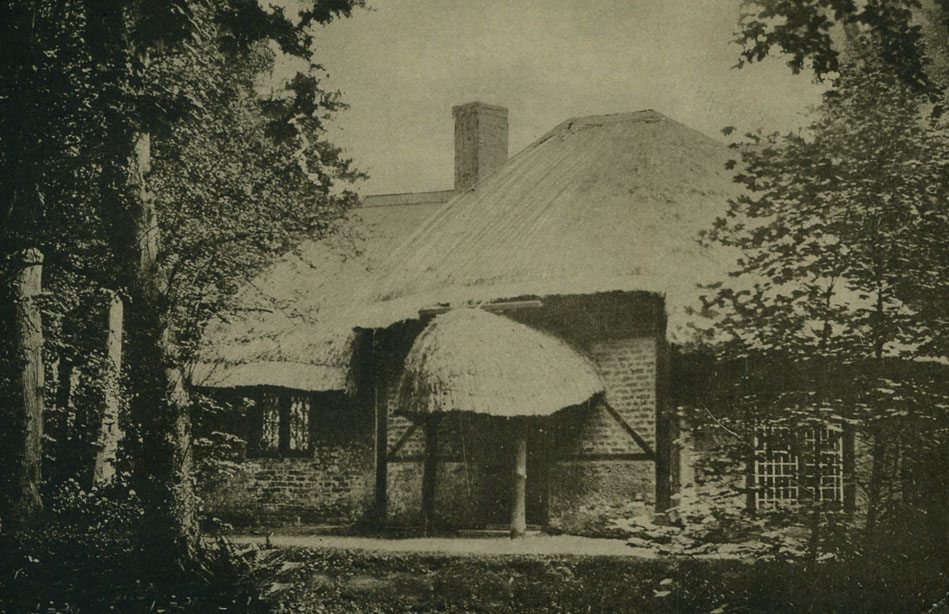 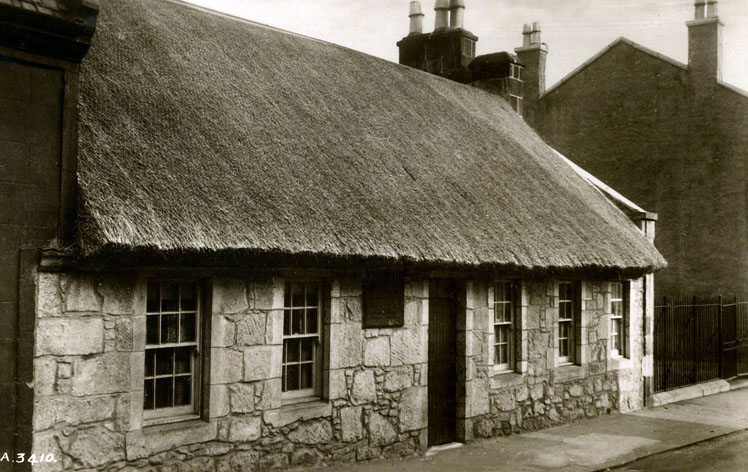 Poetic Renfrewshire thatch… In Queen Street, Paisley lies the home of Robert Tannahill ( 1774 –1810). Known as the ‘Weaver Poet’. Who spoke of ‘weaving threads and verses alternately’. He wrote in the local dialect, like his near contemporary Robert Burns. He helped found the Paisley Burns Club and became its secretary. The cottage he lived in from a child, retained it’s thatch until 2003, when a fire forced a change of roofing. 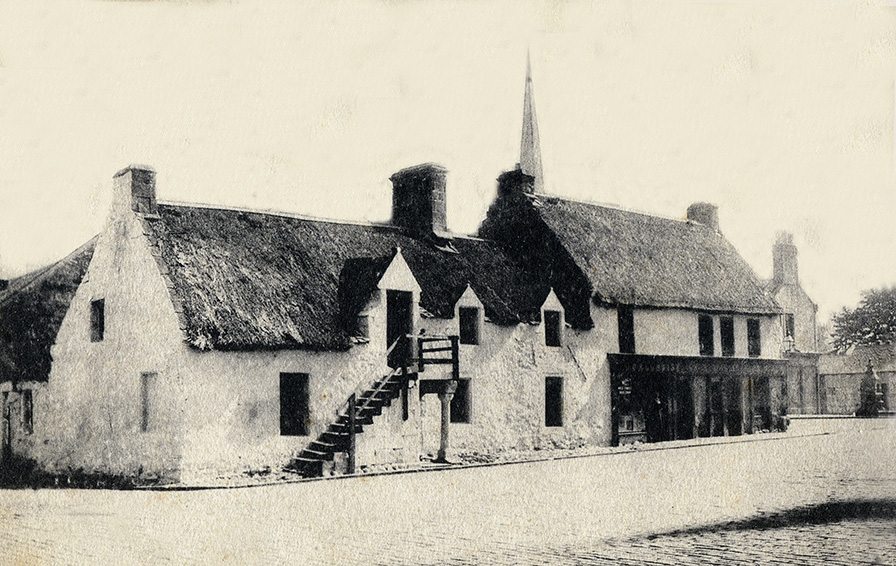 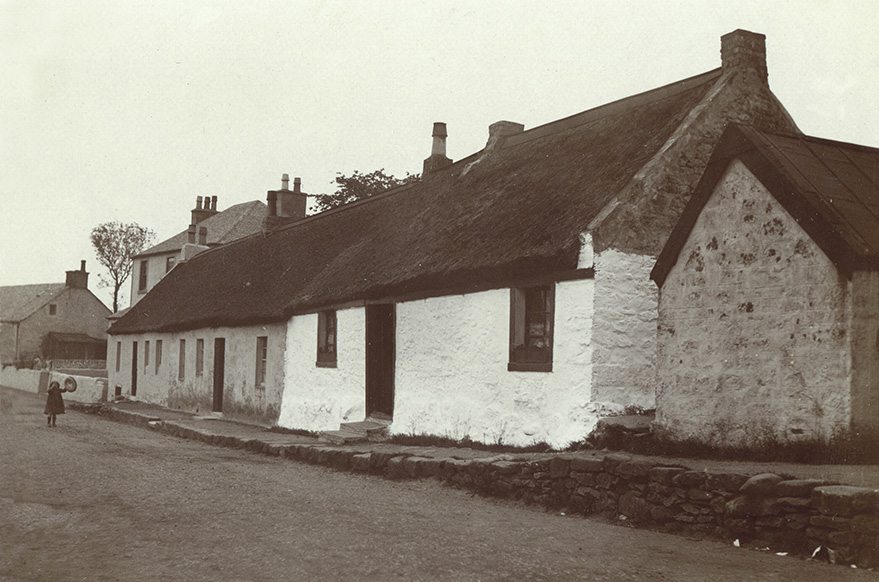 More Renfrewshire thatching… No extra outside fixings required here, being away from the windy coast and hills. These Edwardian photos, show a mixture of straw and heather coating, on the left, in the old county town of Renfrew. And neat straw thatching, on the right, at Barrhead. Both having a ridge of timber. 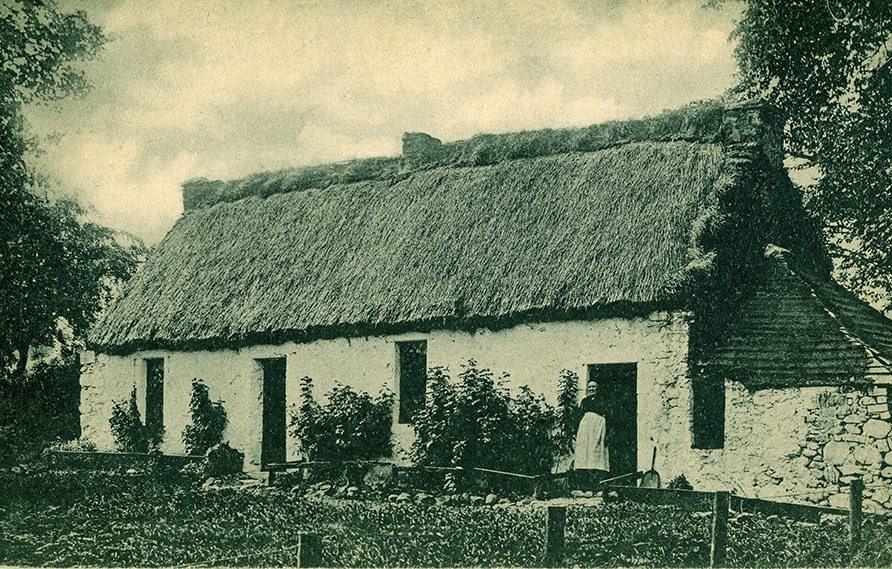 Turf edged Lanarkshire thatch… The upper and lower images, are of the same cottage, at Biggar. The upper seems older, showing a stobbed straw thatch, ridged in turf. The lower picture dipicts a much neater roof, again edged and ridged with turf. A first glance, a roof of Tay water reeds would seem lkely but on closer inspection, the roof is of straw. Perhaps using some very carefully thrashed material, in the manner of combed wheat reed? 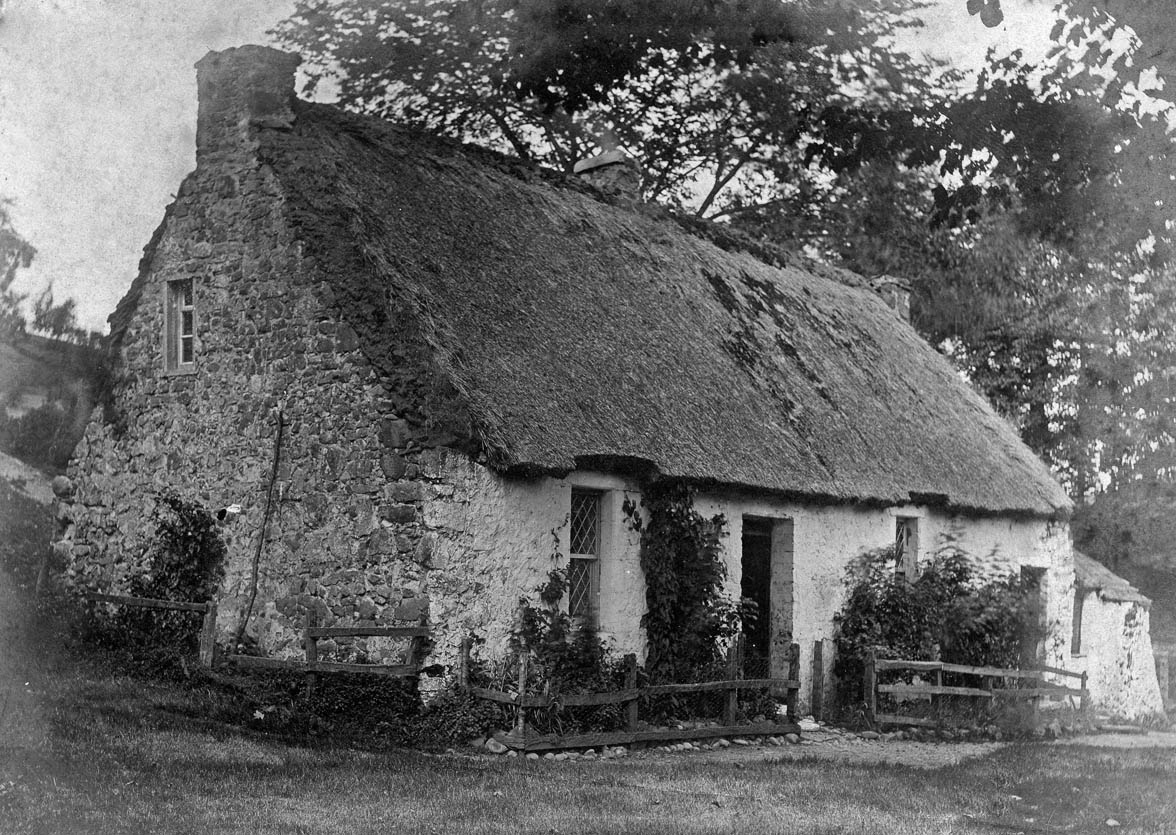 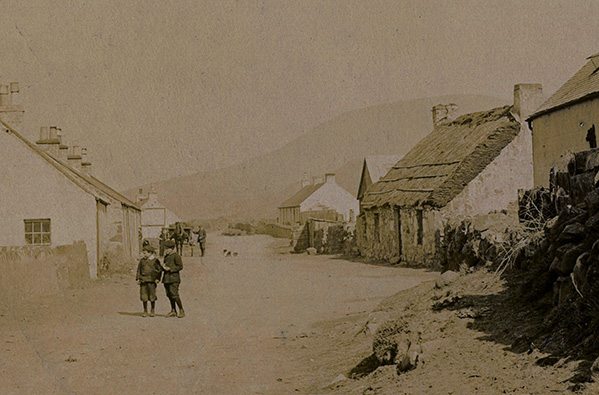 ‘On the road to Ballantrae’… Near the Ayrshire coast, around 1905. The right hand cottage has a thick gable, of neatly layered turf. Which also forms the ridge. Some crook and caber fixings, assist the standard thatching, to stay in place.

In Ballantrae… ‘The Foreland’, on the beach, if the fisherman drying his nets is anything to go by. This long row of thatch, contemporary with the upper image, shows turf ridged straw roofs; one patched with  turf. The odd leaning caber, to help guard against wind damage, is also in evidence. 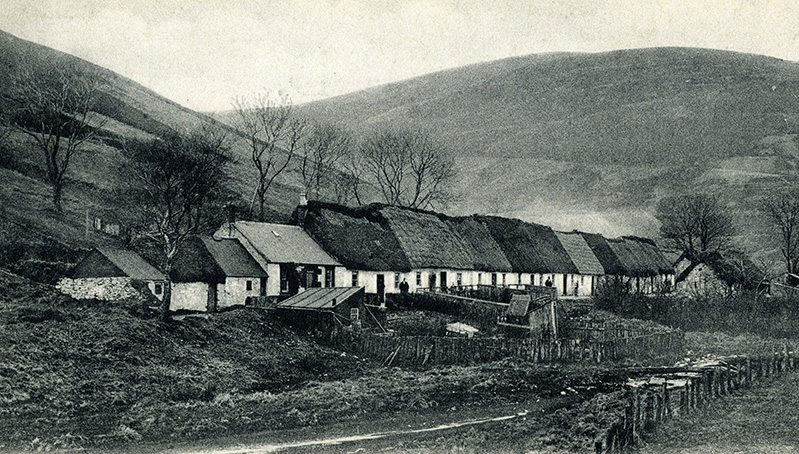 Scotland’s highest village… Meadowfoot cottages, Wanlockhead, in 1910. This Dumfriesshire mining village, shows a mixture of heather and straw thatching, all topped with turf. There is little outside fixing; which is surprising, in this high location. But no doubt the surrounding hills, provided some shelter. 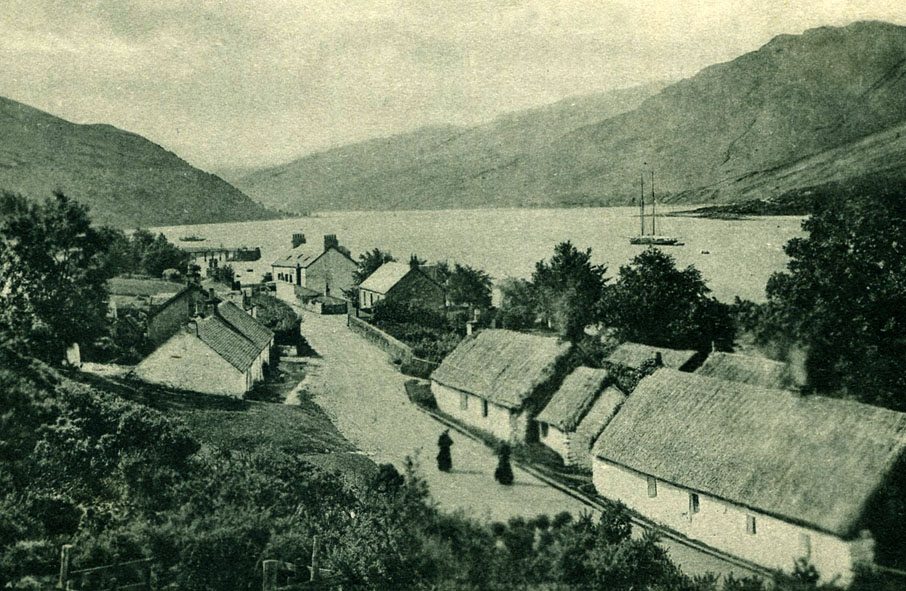 Dunbarton thatch… At Arrochar once in the old county, now in Argyll. The thatch here, in around 1900, looking over Loch Long, consists of long straw, topped with a mixture of turf and straw ridges…The old stereoview below is of the same area, showing the same straw ridge details as the Arrochar photo. What both depict are large, bent & pointed, wooden stapes; replacing spars and liggers. Similar work was found at Aberfoyle, over in the old county of Perthshire, not a great distance from this area. The cottage below also having turf gable ends… 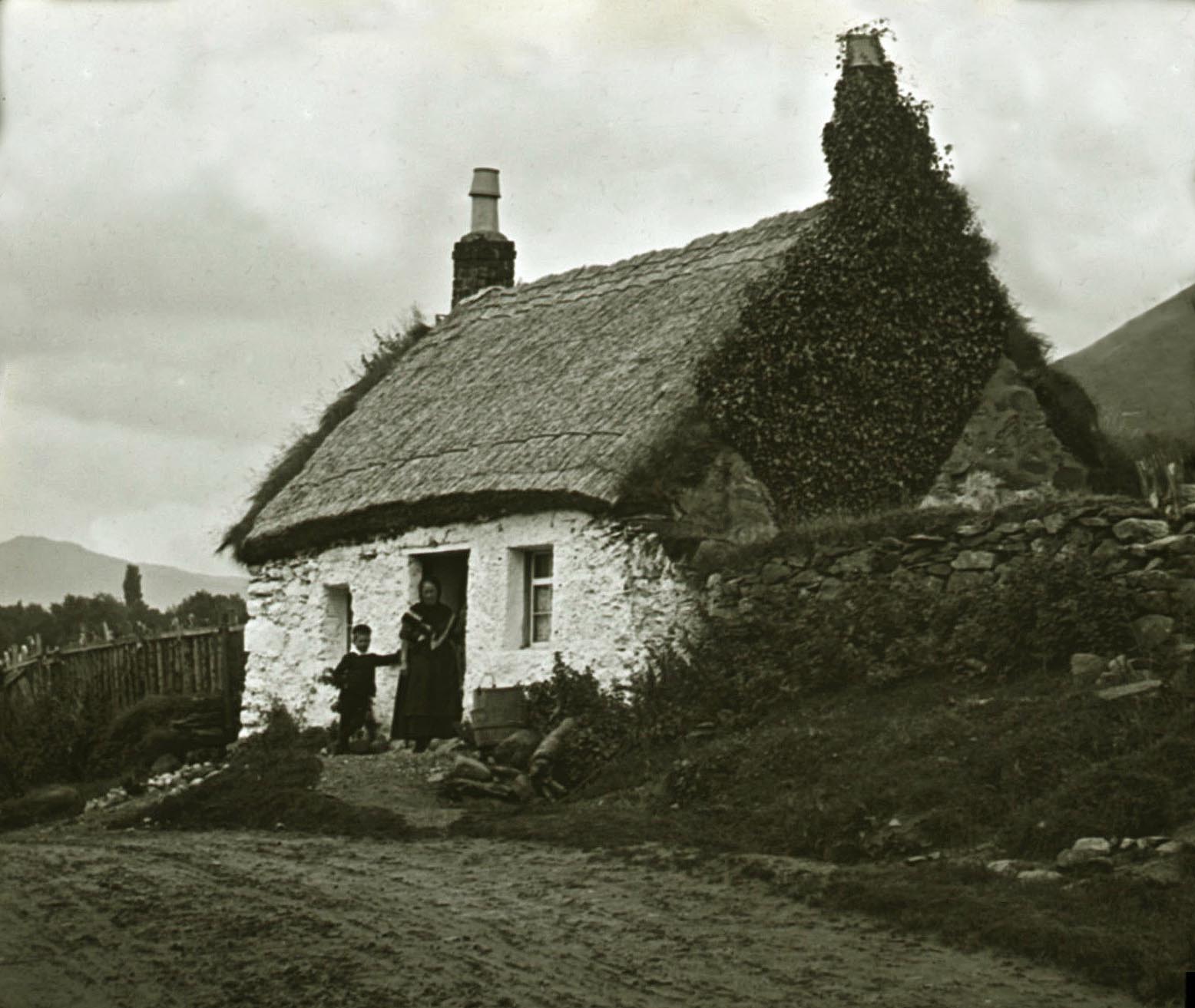 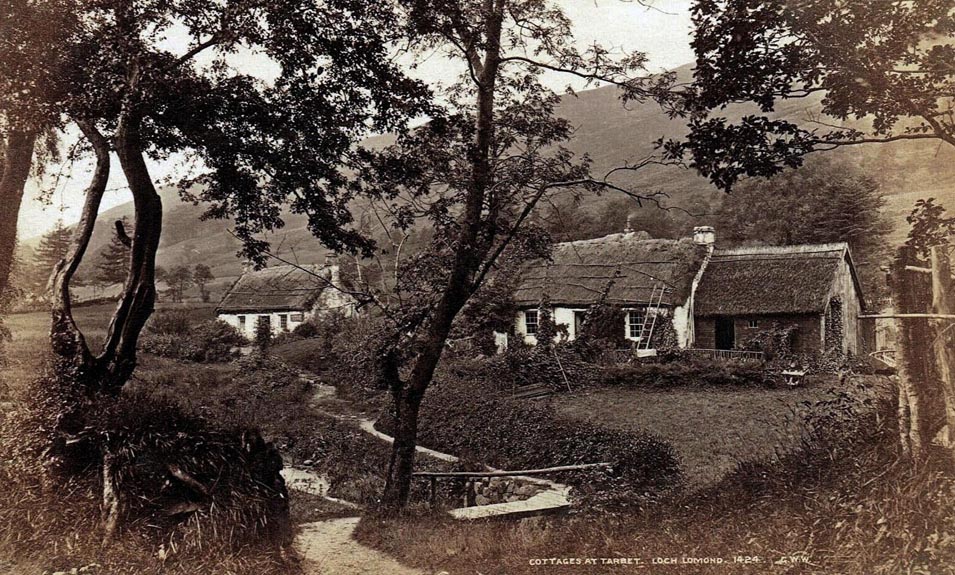 Dunbartonshire, Victorian thatch… At Tarbet which lies on Loch Lomond, close to the above village of Arrochar, on Loch Long. This area seems to have been a popular spot for photography… The above image was taken by George Washington Wilson, a favourite of Queen Victoria. This scene dating to the 1880’s. Two thirds of the roofs consist of fairly standard thatching, held down with some crook and caber external fixings. The far right extension being coated in water reeds, probably from the River Tay; with a timber gable end. 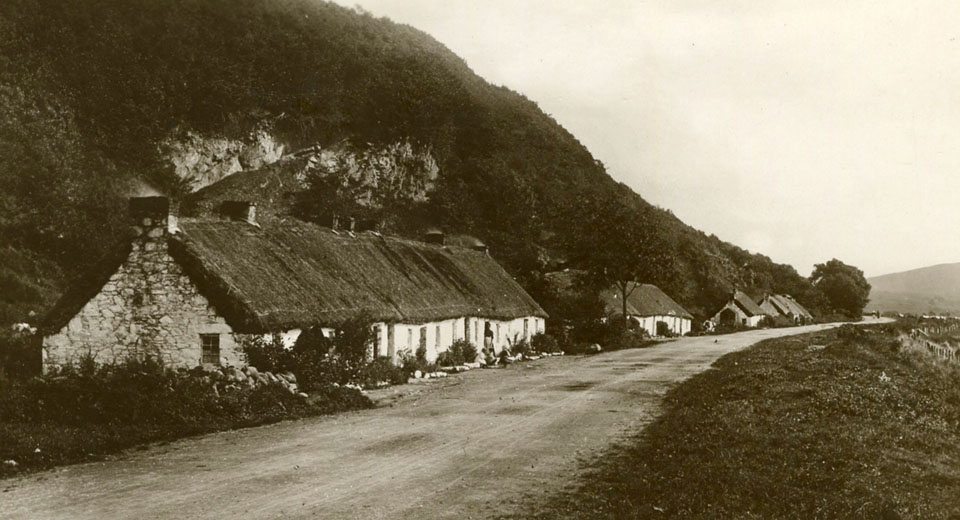 Wigtonshire thatch… At Blackcraig, near Newton Stewart. An Edwardian view, of some multilayered, long straw roofs, with straw ridges. All the other homes, in the distance, are also thatched… 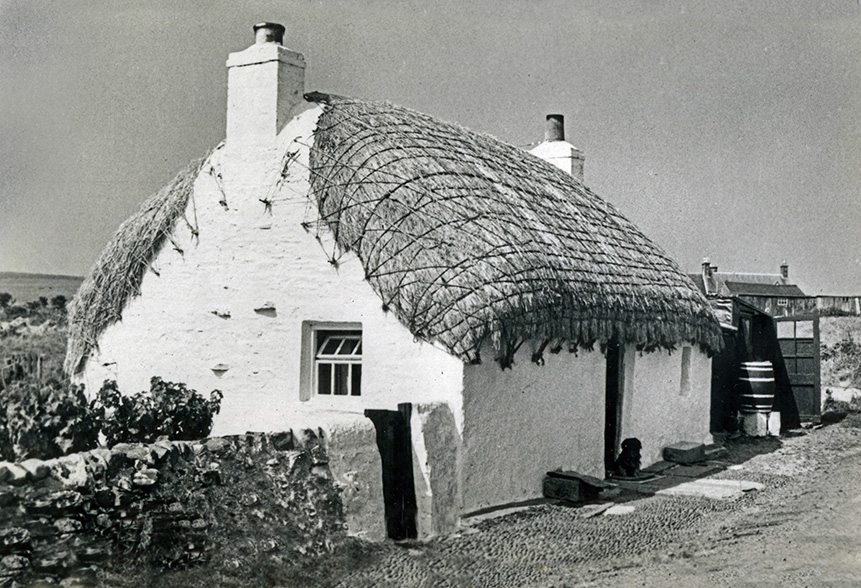 Roped Highland thatch in Wigtonshire… At Broadwall, near the exposed Mull of Galloway. This 1950’s roof being similar to thatch further north, in the Hebrides and south, in the Isle of Man.

To finish, some city centre thatch; in Glasgow…

The city of Glasgow, unlike many others, never seems to have banned thatch from covering it’s houses. Even after a couple of serious fires in the seventeenth century… It seems the main fire fighting was carried out by the use of leather buckets. After the fire of 1652, it was stated that the city’s buckets were either ‘’stoline away or brockine’.’ The City’s Grammer School was thatched in the 1570’s, when the authorities ordered it made ‘waterfast’…. So, forty eight shillings were paid for “twelve threif of quheit straye to theik” the school, and eight pounds ‘Scots’ were given to James Fleming for “mending” it….

There were thatched properties in the heart of the city, throughout the nineteenth century, as the following images show… 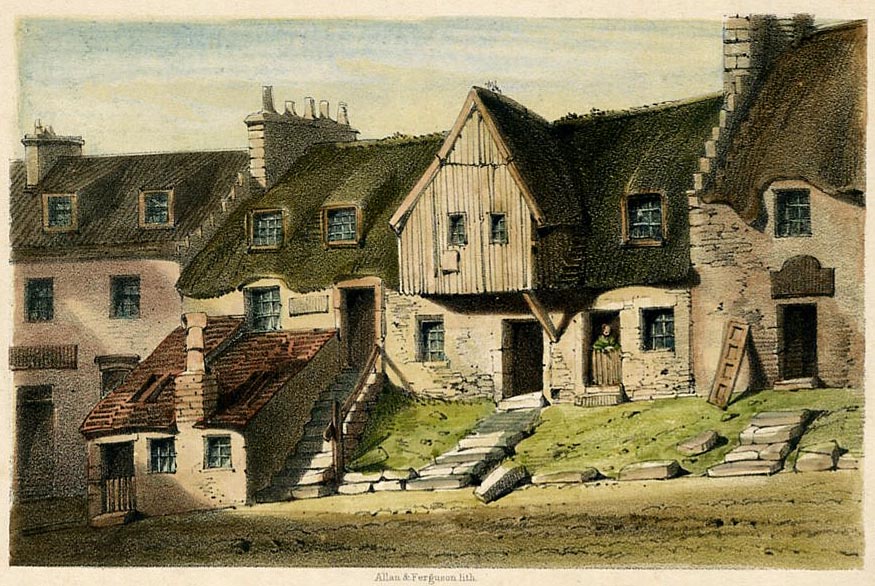 ‘A cottage in the High Street, Glasgow’…from a 1817 watercolour by Andrew Donaldson. The artist showing standard thatching with a turf ridge. 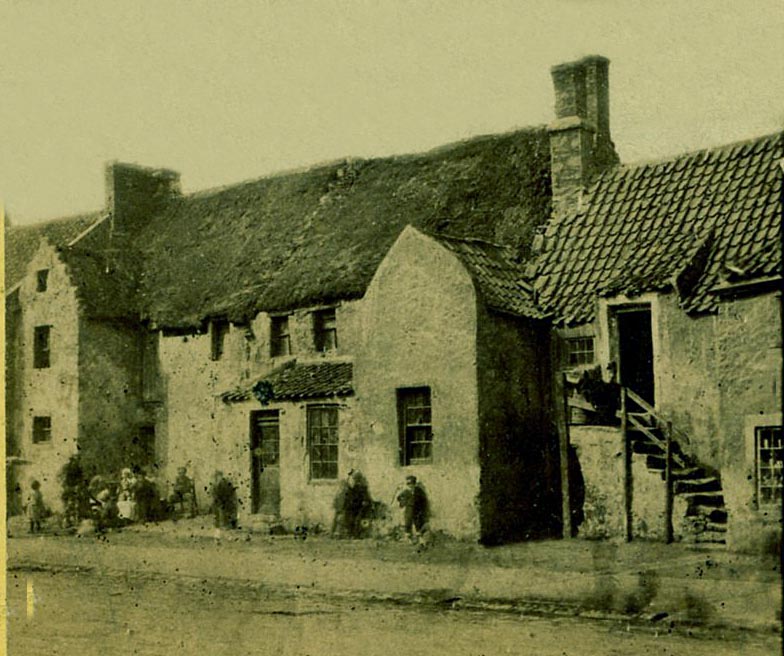 Glasgow Thatch… This image, from around 1860, is untitled, but is very likely some more city thatch. 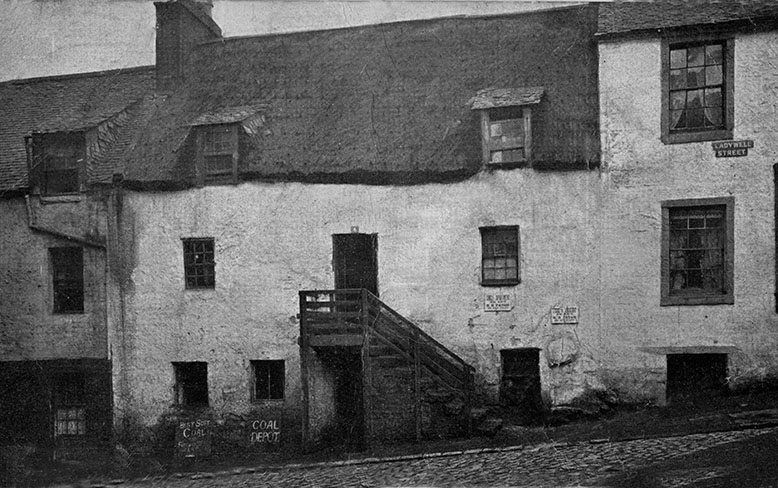 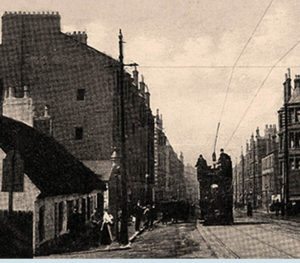 More Glasgow thatch… the above image is of Ladywell Street, around 1900; one of this city’s original seven streets. The thatch here is worn, but shows a standard coating of straw, with a timber ridge. The coatwork, could just possibly be coated with clay, like roofs in Eastern Scotland. Such work was also known hereabouts. This would also have acted as a fire retardant. The right hand image, from the same period, shows a busy street, in Shettleston, near The Drum public house. The two tiny thatched cottages, on the left, remained from a time before this place became a burgeoning suburb, of the British Empire’s second city…