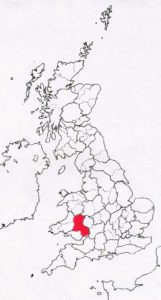 The old shires of Radnor, Brecon and Monmouth, today have little of the thatcher’s art to show; but in the past thatch was as common here, as in any other part of Britain…

The long straw roofs, that once graced this area, seem mostly to have disappeared before the widespread use of the camera. And they seem to have shared much in common with neighbouring English counties. National boundaries, as ever, having no influence at all on the trade…

The craft hereabouts, showed some influence from the Northern thatching tradition; in the north of the area. With most other areas generally following a somewhat Southern style; with some allowance being made for a shortage of thatching materials… 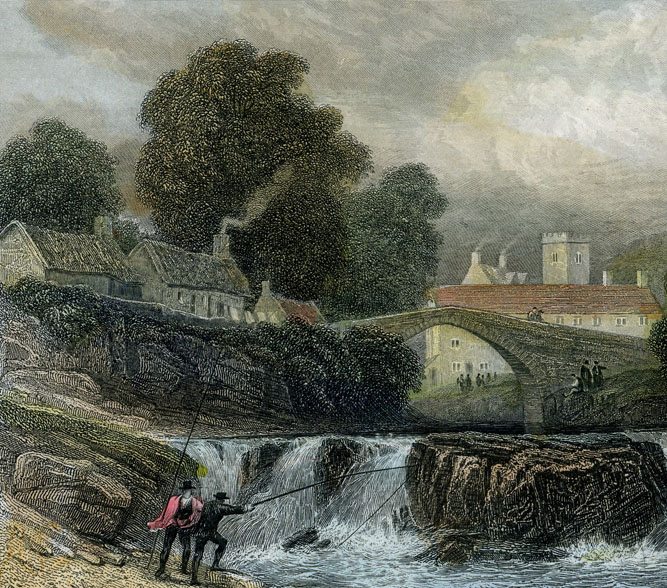 Before the Camera, two centuries ago… At Rhayader; where a pair of thatched cottages, looked out over the River Wye. Further east lay New Radnor, the original county town. The Tudor writer William Camden described it as ”fair built but with thatched houses, as is the manner of that country”. The rectory was still thatched in 1849; ” unfit for the residence of the officiating minister”. The thatched town hall survived until Edwardian times… The image below shows just thatched barns, in around 1820. 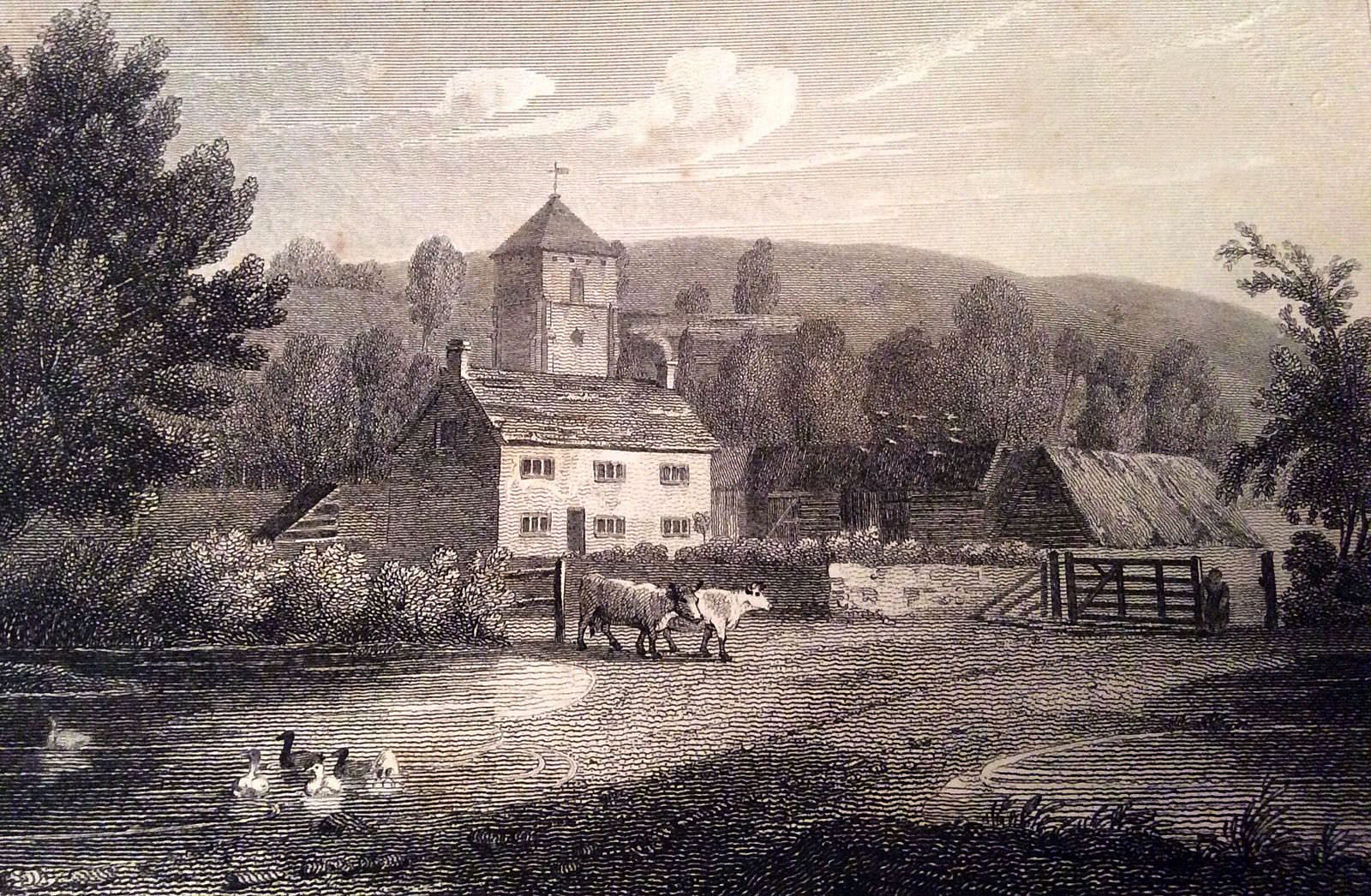 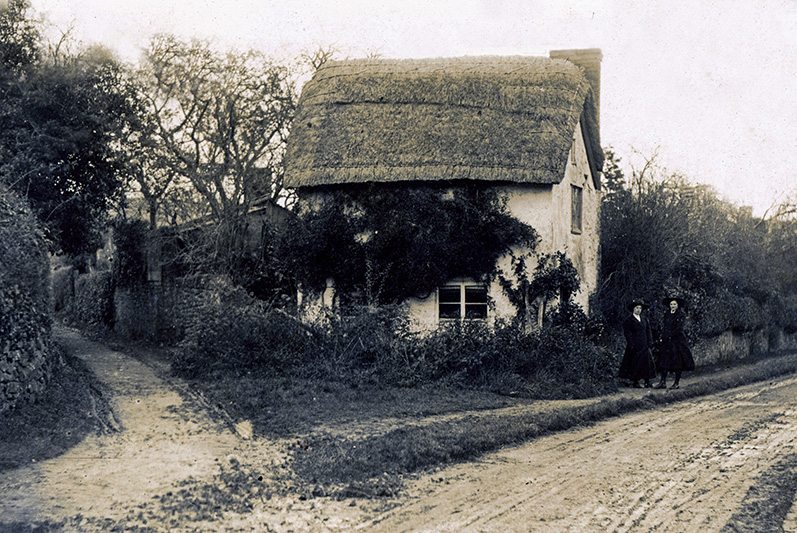 Lone gone 1… The site of this cottage at Green End, Presteigne; is now part of the town’s by pass. This century old image, shows a thatching style similar to that in neighbouring Herefordshire . The roof here having been repaired with several new upper courses of long straw, under a new ridge.

Long gone 2… The image opposite from around 1830 and the one below, captured some seventy years later; show a tollgate and some thatch. This lay at Knucklas, on the road leading away up Garth Hill. Like Prestinge above, not far from the border with England, this time a little further north opposite Shropshire. As ever with the craft political borders mean little; with the long straw thatching depicted below being found in both counties. Careful examination shows that the standard coat of long straw thatch, is topped with a rope top ridge…. 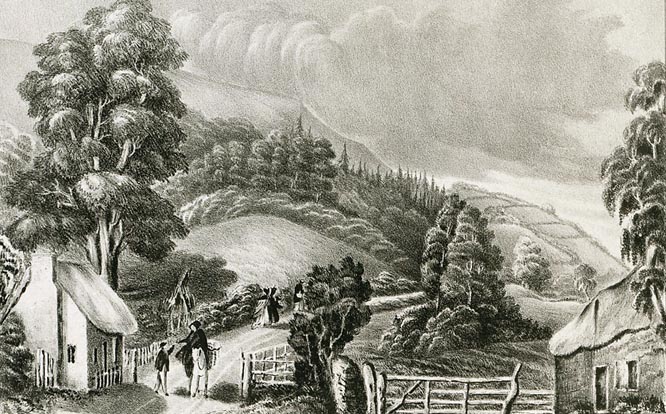 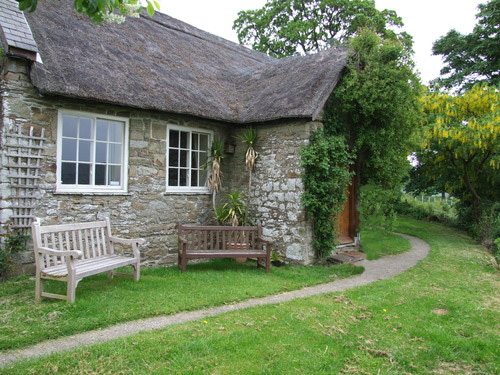 Sole survivor… Three images of The Meeting House, of the Society of Friends. Known as ‘The Pales’, near Llandegley, in central Radnorshire. Said to be the only extant thatch in the old county. 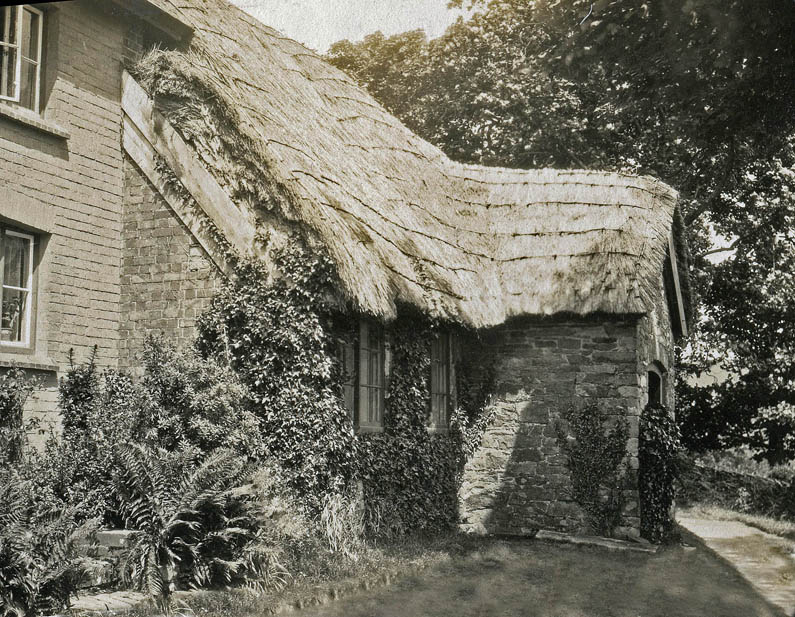 This old photo is dated 1930, and dipicts a roof thatched in the manner of the local ricks and stacks. And looking rather the worse for wear, on the gable end… 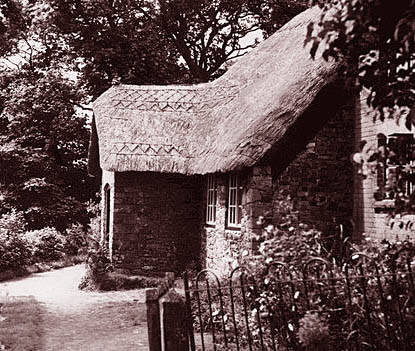 The above image shows some decorative long straw, probably dating to an earlier period than the left photo… More from The Pales a little later on…

Take note… ‘’TO DEBTORS AND CREDITORS. ALL Persons having any Claim or Demand on the Estate or Effects of WILLIAM ROBERTS, late of the Garth, in the Parish of Knighton, in the County of Radnor, Thatcher, deceased, are requested to send an Account thereof to Mr. William Collins, of the Lower Woodhouse, in the said Parish..’’. From Hereford Journal, 1st December 1830 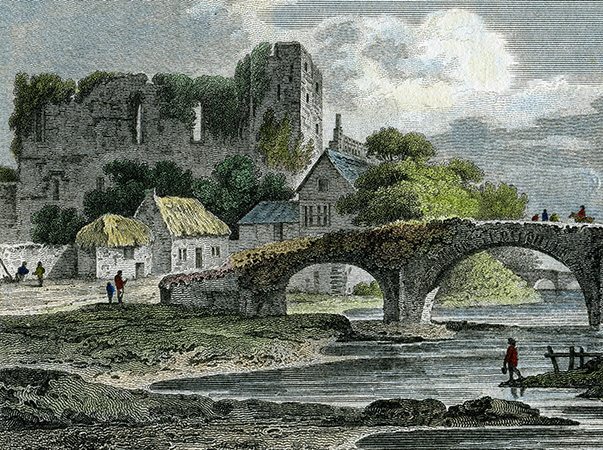 Before the camera, two centuries ago… A thatched cottage; snug under the castle, in the county town of Brecon. Restored, the castle still stands; unlike the cottage.

Below at Crickhowel, the artist has shown a thatch in the middle distance; with a very uneven ridge and some thatched chimney lums… 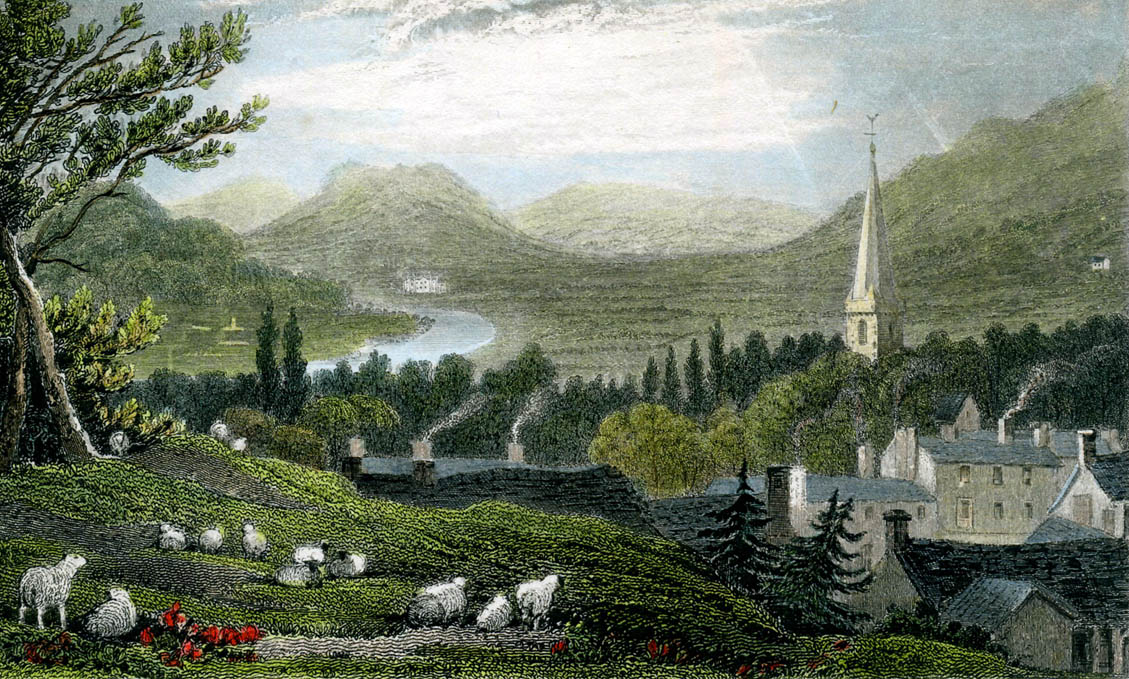 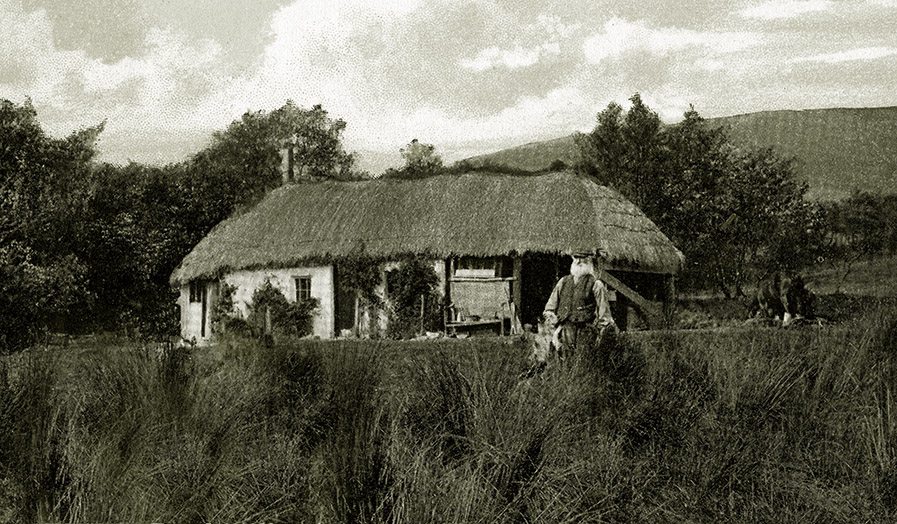 Long gone… ‘Rose cottage, Llanwrtyd Wells’, in around 1905. Some basic long straw thatching, with a repaired hip end; and a turf ridge. Perhaps some of this work was done by the gent, in picture? Many occupiers, at this time, could do basic work. Being similar to work on thatched ricks and stacks… 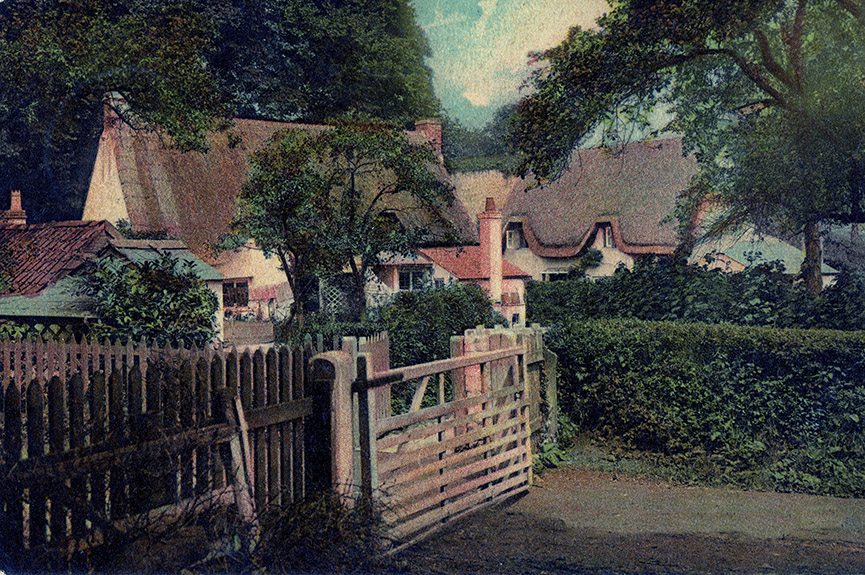 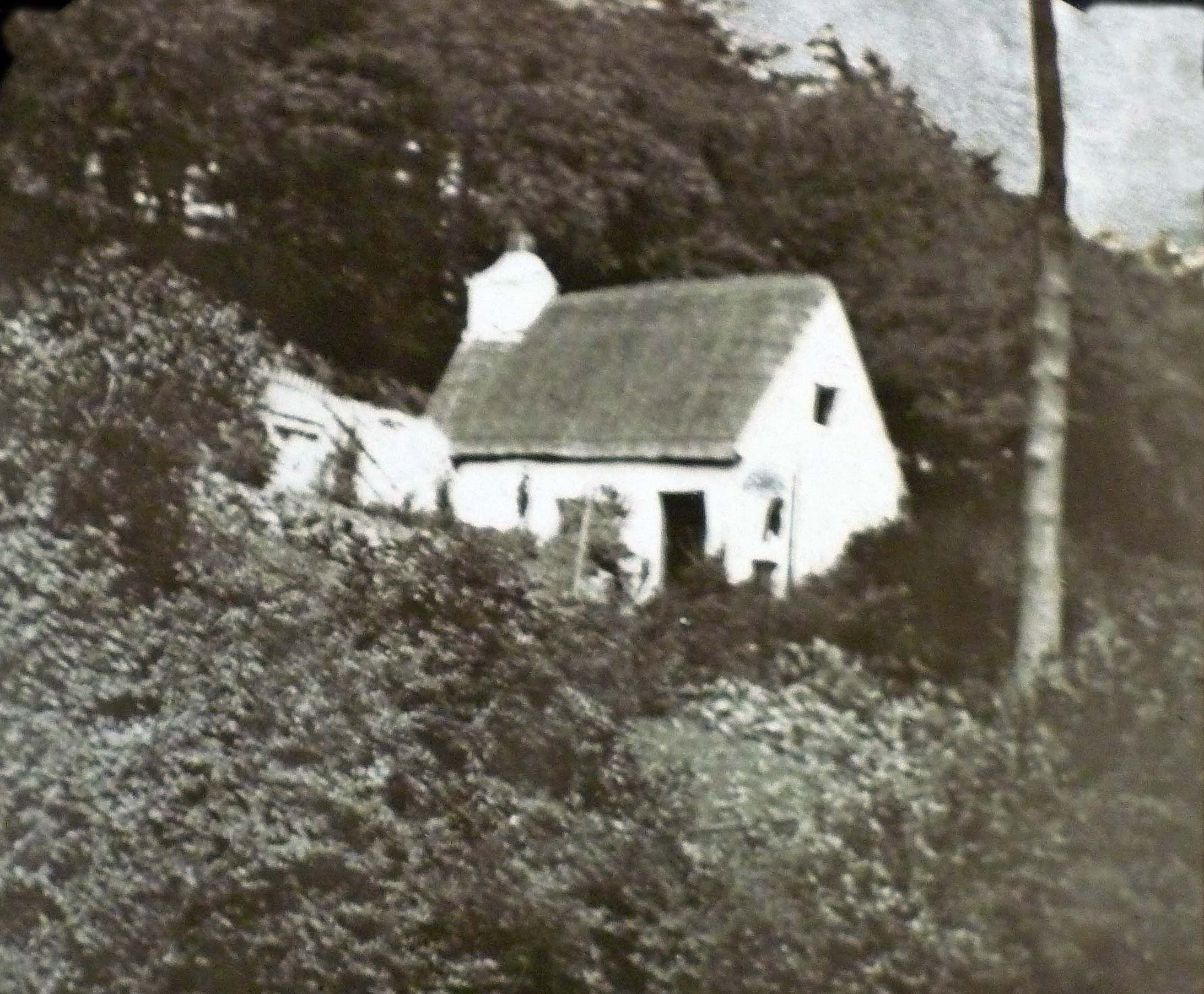 Monmouthshire thatch… Around 1910, with thatching here generally following the Southern tradition. Although a little influence is apparent, from neighbouring Glamorgan, with some work being done in combed wheat reed. The top left image, shows cottages at Ebbw Bridge near Newport. The right hand, grainy image, is of a ‘colliers cottage, Monmouthshire’. This shows a rather angular thatch, similar to work in northern wales. This cottage was likely sited in the north of the county, in the coalfields… 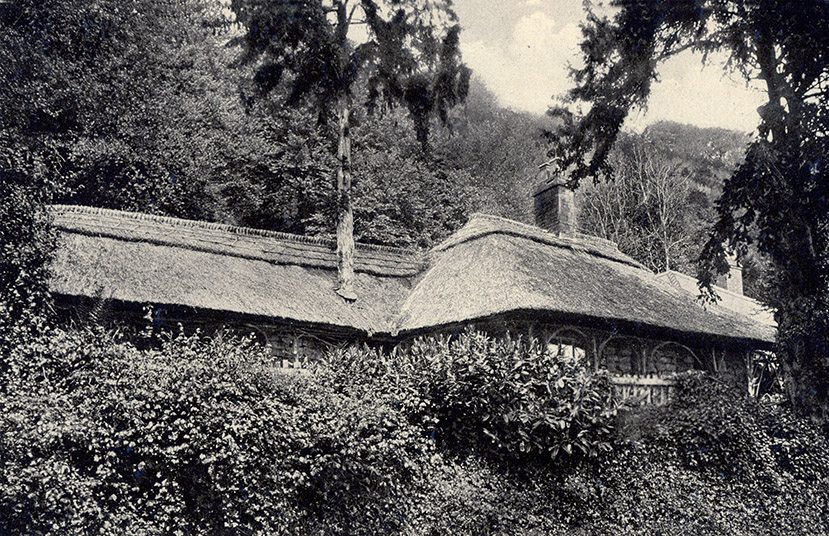 The ‘Moss Cottage Tearooms’, which were sighted right on the banks of the Wye, at Tintern. Although very close to England, this thatch sports a distinctive Welsh rope top ridge. The upper image, shows the roof coated with some Glamorganshire combed wheat reed. The lower, possibly earlier image, shows a more local long straw roof, also with a rope top ridge. The cottage was built in the ‘Cottage Orne’ style in the 1820’s; being demolished in the last century… 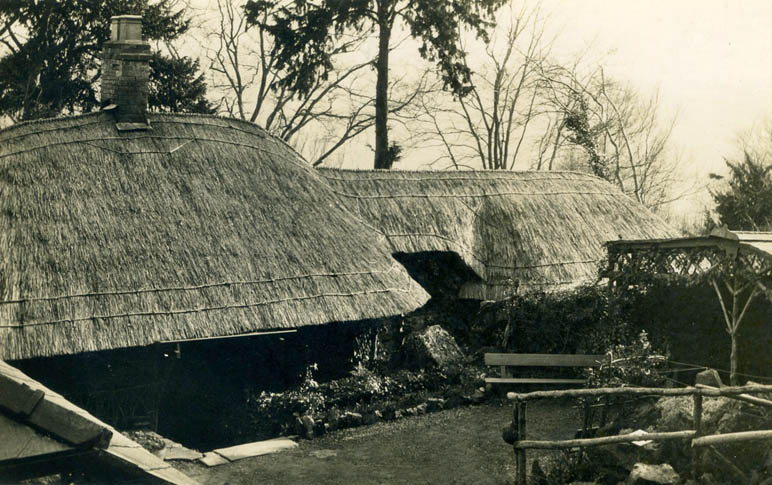 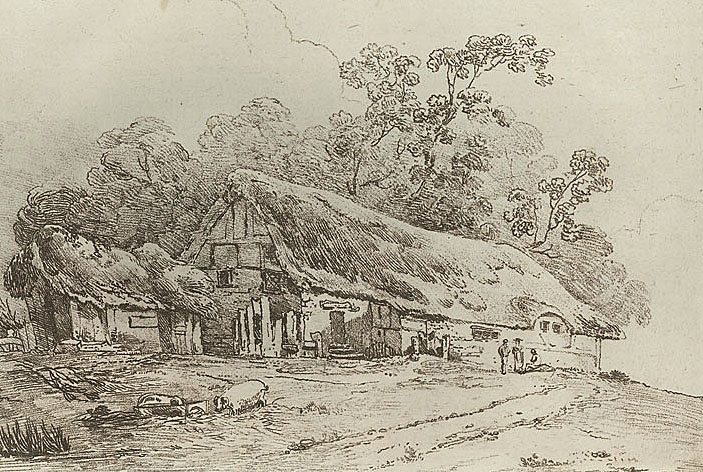 Before the camera… ‘Cottage near Monmouth”. A print from 1810, showing a timber framed longhouse. From the same date is the lower image, of Raglan Castle, with a thatch in the foreground… 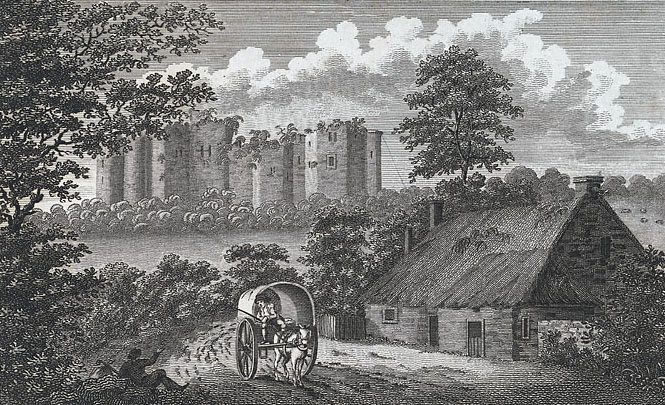 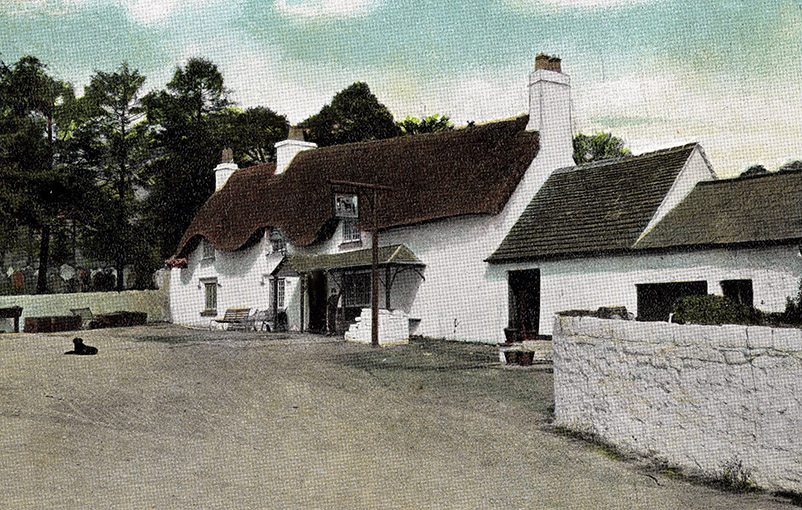 1900 and now… The Horse & Jockey at Llanvihangel, near Pontypool; has retained it’s thatch, now being coated in water reed….

Finally, another visit to The Pales… 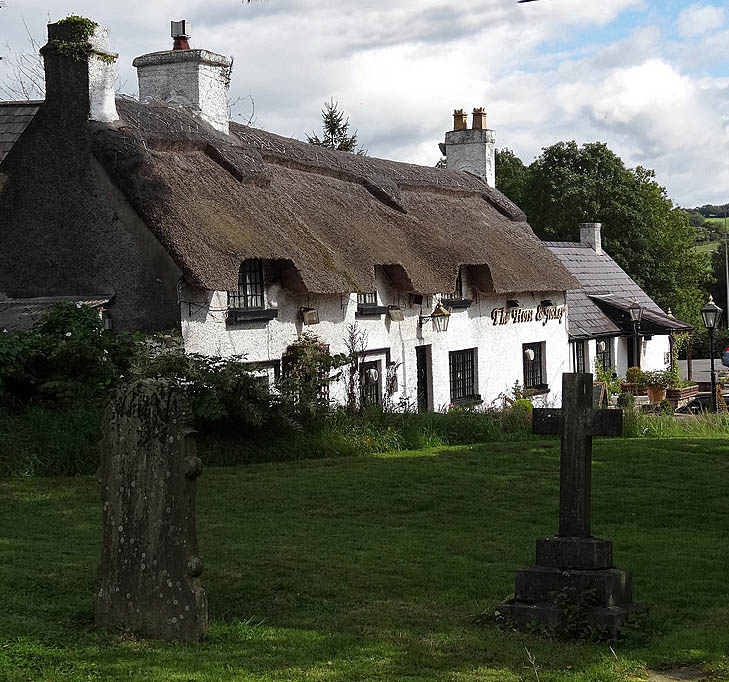 The upheavals, caused by the Civil Wars of the 1640’s, allowed the spread of new religious ideas. Some, that have stood the test of time, are still followed by The Society of Friends; better known as The Quakers… Three of their oldest Meeting Houses, still have thatched roofs. All are plain, dignified buildings; that befit the beliefs of their users…

The oldest lies in Portishead, in Somerset; a few miles south of Bristol. This building, has been used by The Friends since 1669. The roof today is in local, combed wheat reed, gently curved; with a simple flush ridge. As is the other thatched, Quaker building, in Cornwall; the splendidly named, Come to Good Meeting House; named from the Cornish: cwm-ty-cwrt or meeting house in the woods. This lies a few miles south of Truro, funds to build here, were raised by subscription; in 1707.

The old county of Radnorshire, has the other meeting house. Here, is possibly the only old thatched building, surviving in Mid Wales. A burial site was established here in 1673, the meeting house, known as The Pales, followed in around 1717. Little alteration has occurred since. The old images show a building thatched in long straw, generally in the thatching style of neighbouring Montgomeryshire. Alone, in this area, it did not fall prey to the slate quarries of North Wales… 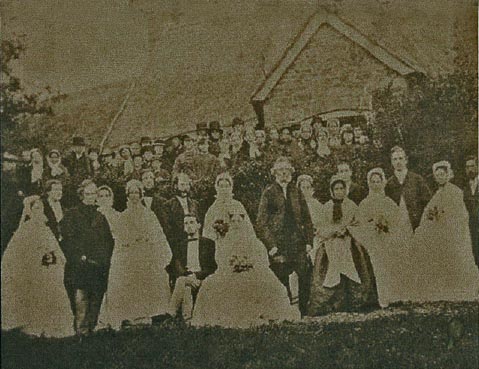 Lots of Friends, at The Pales… The Cooper family wedding, in 1866. Showing a faded but rare early glimpse, of the craft in Mid Wales. Apart from the meeting house there seems to be another thatched building attached to it, on the left. This seems to have either been rebuilt or replaced by the existing Wardens House. 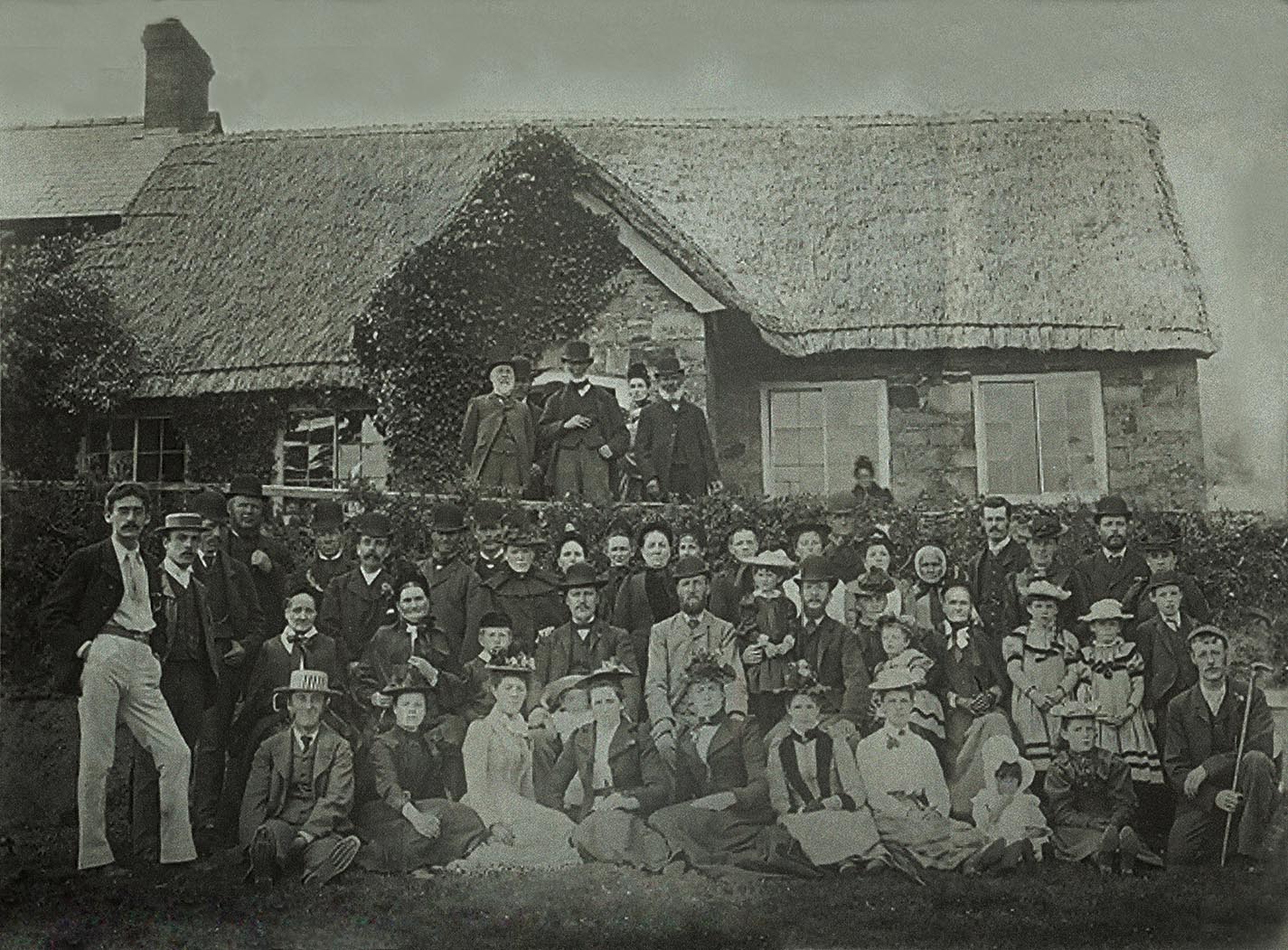 More friends… in the 1890’s. Some influence from the Northern style is apparent, in the angular long straw thatch, shown here, in 1893.

All three meeting houses welcome visitors… A chance to see some thatched buildings, in their original state. And perhaps experience the deep tranquillity that surrounds them all.

Many thanks to all at The Pales, for the information & the two splendid marriage images.