A Brief History of British Thatching; over the last Ten Thousand Years.

Perhaps the most important single event, in the history of the craft of thatching, is the massive decline; in both thatchers and thatched buildings, over the last couple of centuries. For every six or seven thatchers, appearing in the 1851 census; there is now less than one.

While labour was cheap and thatch was close at hand, the craft more than held its own, thousands of thatchers, covering countless roofs; for many hundreds of years. However, the coming of the Industrial Revolution changed this equation, over much of Britain. Thomas Pennant, extolling the virtues of the Grand Junction Canal, summed up the position well. Noting with pride, in 1782, that: ‘the cottage, instead of being half covered with miserable thatch, is now covered with a substantial covering of tiles or slates, brought from the distant hills of Wales or Cumberland…’

Surviving canal side thatches, prove how the craft has a knack of hanging on, but Mr Pennant was accurate enough. All the thousands of new buildings in the expanding cities, were roofed with materials from the clay pit or the quarry; brought in by the canals and later the railways. And not with materials, supplied by the nearest field or farm…

In Mr Pennants day, many towns had already banned thatch, for fear of fire. But most country dwellers would have lived under it, these being the vast majority, of the ten million or so Britons around at that time. Their forebears would have seen tile and slate roofs, as curiosities; as many today look on thatched roofs. 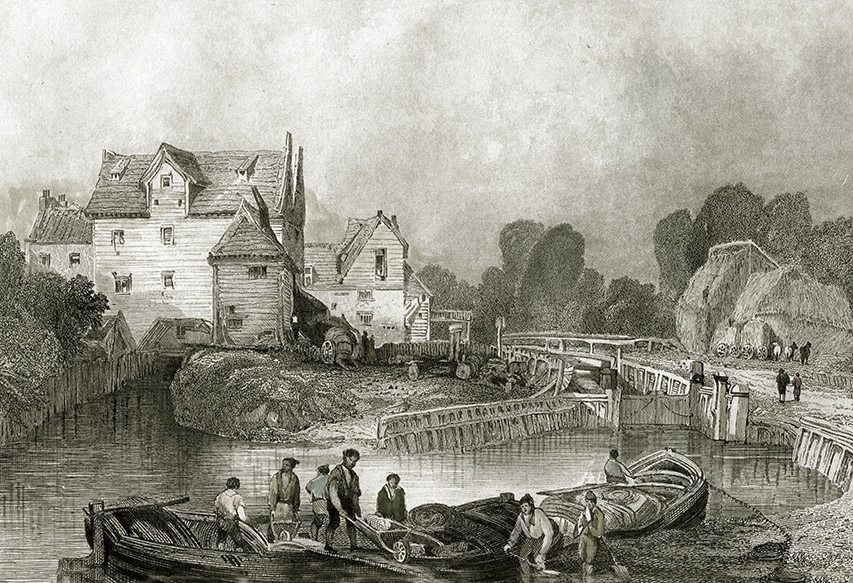 Tottenham Mills, in Middlesex… around 1820. A generation, after Thomas Pennant’s musings; this large building still retains its thatch. Although it could not be closer, to the easy transport, provided by the River Lee Navigation. Which is still very much in existence, unlike the splendid mill. 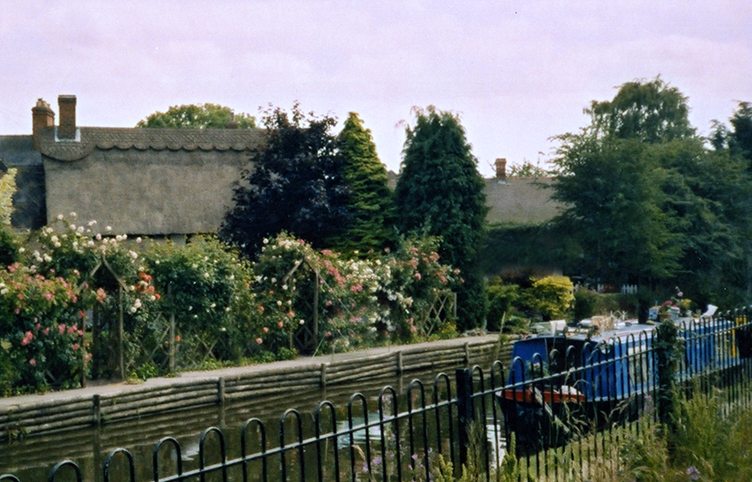 Surviving the revolution… There are still more than a few canal side thatches. As this attractive scene above, beside the Trent and Mersey Canal; at Alrewas in Staffordshire, shows. Opposite is Black Jack’s Lock, on Mr Pennants Grand Junction Canal, in Middlesex. The thatched lock keepers cottage, being a century older than the canal… 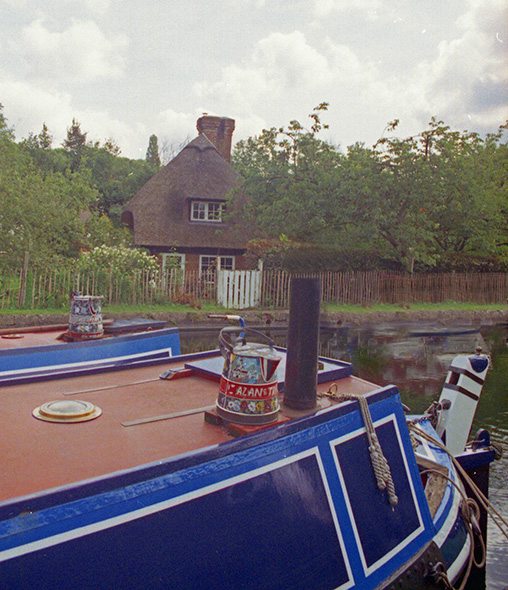 As the nineteenth century progressed, only the areas where the canals and railways were late in coming, or never arrived; saw domestic thatching still thriving… Even in these areas, the craft often depended on the attitude of the landed gentry, as few who lived under thatch owned it… Numerous landlords kept or built thatched properties, for aesthetic reasons. But most of today’s thatch survives, because the former estate owners were too mean, to pay out for new roof timbers and tiles; when a thatch repair was always cheaper. Or just happy, to let the rents roll in and the years roll by… But where modern ideas of estate management took hold, the tenants housing was either stripped of thatch, or totally rebuilt. These differing attitudes, are the reason why thatch now often occurs in clusters… Settlements, making up some long lost estate, may have many examples; the surrounding villages none. 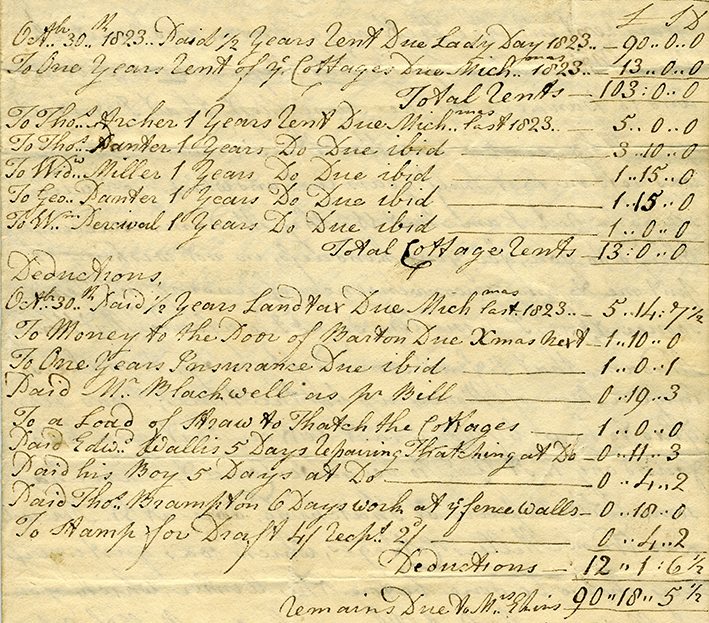 Deductions…. ‘Most Worthy Madam… I have had some little repairs of Thatching, done at Wm. Percival, and Widow Millers cottages, which was quite necefsary should be done before the winter, which you will see as pr Acc…’ So wrote John Morer; when sending his accounts and rent to his landlady. For his farm at Twywell, in Northamptonshire, for the year 1823. The list of deductions, shows the costs incurred; for a load of straw; and 5 days wages, for one Edward Wallis and ‘his boy’, to thatch it in. The cost of these ‘little repairs’, came to more than the rent, the good Widow Miller paid for a year! John Morer’s landlady lived in far off Ludlow. She drew a tidy £180 per year in profit; and was happy it seems to keep her tenants dry. But owners, who took a more lively interest in their estate, often saw the benefits of re-roofing; or simply letting uneconomic buildings fall down. 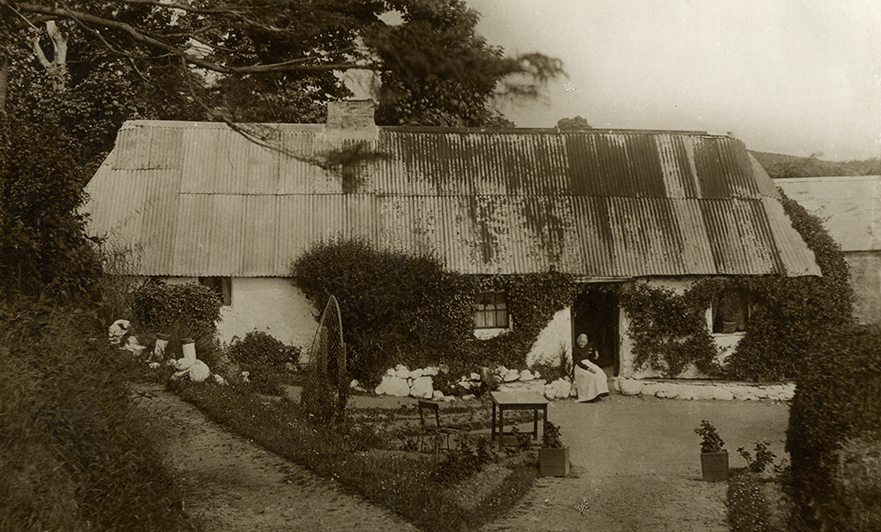 Uneconomic… Solutions, from around 1900. The upper left image depicts a barn, at Chadwell Heath, in the old county of Essex; now in the London Boroughs, in the process of having a shiny new corrugated iron roof, fixed over what remains of the thatch. The right photo shows ‘Granny Byrne’s Cottage’ near Sheffield; having had much the same treatment… Posibly put straight on top of her thatch. A few of these roofs still survive, preserving a wealth of historic information.

Opposite… Another, more drastic solution, was applied at Kinnesswood, in Kinross-shire. Not unsurprisingly, the building on the far left has now disappeared. Not so, the adjacent thatched cottage. Being the 1746 birthplace, of Michael Bruce. The ’Gentle Poet of Lochleven’. Now a pleasant museum, but covered with tiles… 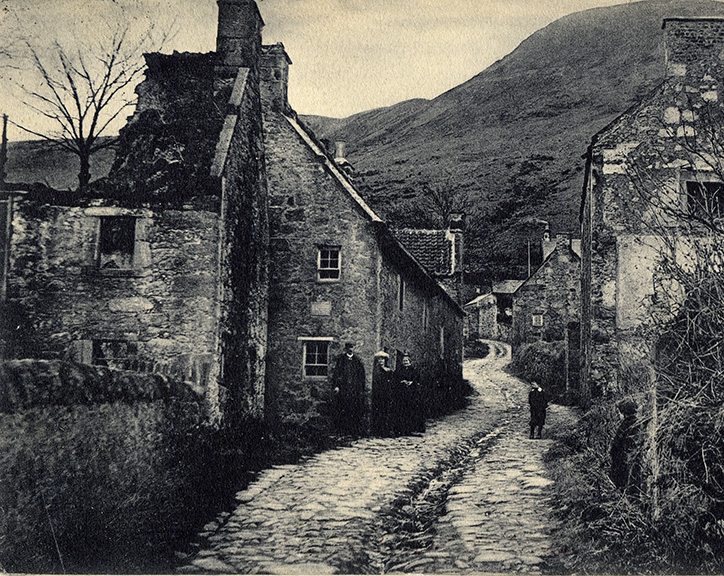 As will be seen, in the final chapter of this section, the skills of the craft were mainly preserved, throughout this long decline; by rick and stack thatching. Work provided by the farmer in the countryside, and the hay merchant and corn chandler, in the city and town… This type of work had often provided over half a years employment, to generations of thatchers.

The years following the Second World War brought great changes. The total mechanisation of harvesting, mainly in the form of the combine harvester, almost finished the craft. Not only did this machine ruin any straw suitable for thatching, it also did away with the need for cereal ricks and stacks… Listing most remaining thatched buildings, finally turned the tide of decline in the mid twentieth century. But there was still a severe contraction in the craft. When I began in the very early 1970’s, I was told by many that the craft was ’a dying trade’. And I heard stories of recent memory, of some severe competition for employment. Of ladder rungs being cut halfway through and thatchers literally fighting over work..

But since that time things have greatly improved, especially as some arcane building regulations have been relaxed; and new thatched dwellings have been created. And for the first time since Thomas Pennant’s day, their numbers are increasing… 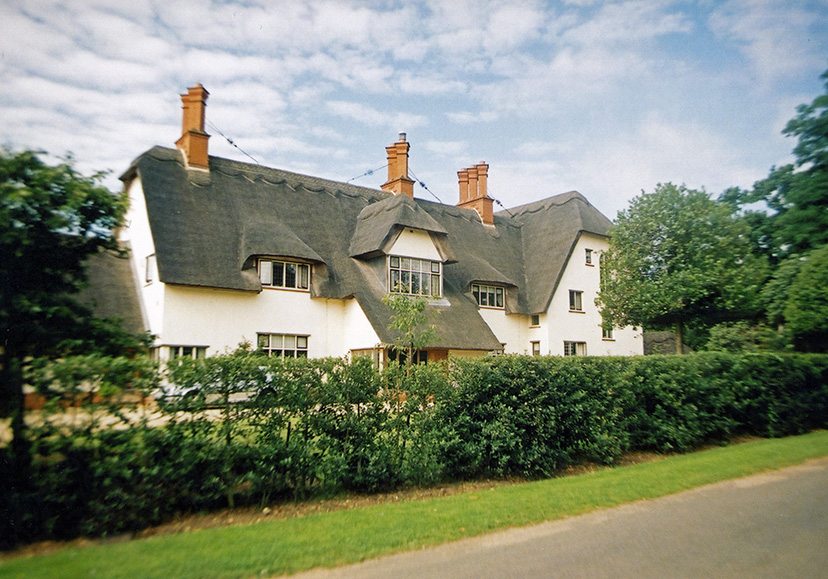 New builds… Above in Huntingdonshire & below in Devon, and in Somerset on the right. 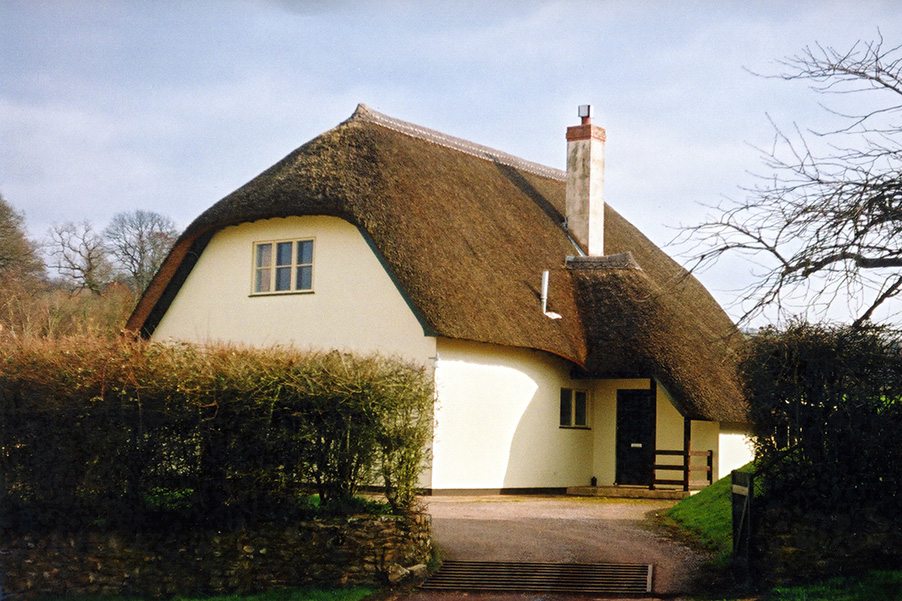 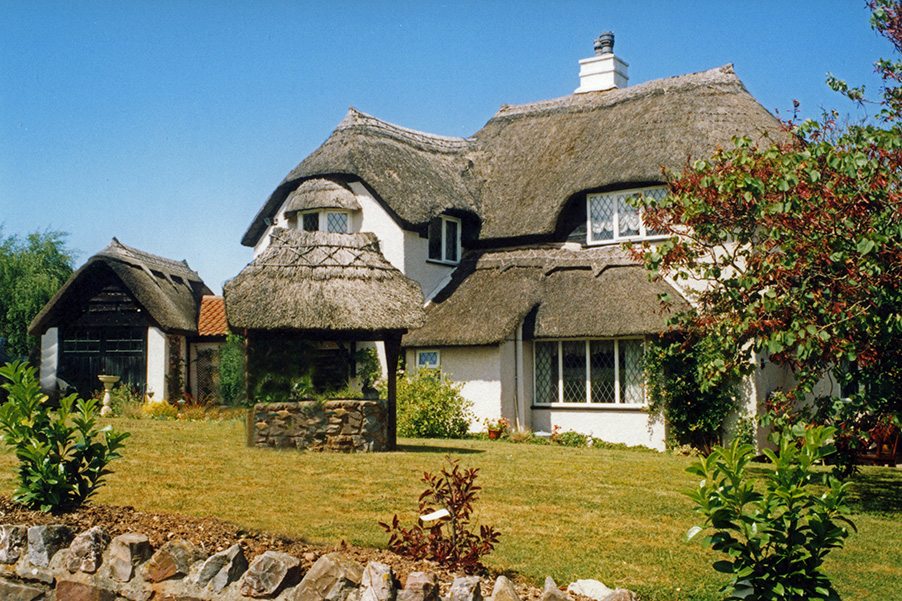 Being organic, thatch leaves little if any trace on most archaeological sites. But what went before need not be a mystery… Thatchers, in the past, used good working practices; or the roof leaked… So by applying basic thatching principles, to the evidence that archaeology gives us; a reasonably accurate image can be built up, of the thatched buildings that kept our forebears dry.

When creating a clearer picture, of some long lost building, I have assumed the following… The roof pitch is around 50 degrees, a good angle for thatch, in any age. The final thatched roof, is 10% larger than the roof timbers. Where applicable, the eaves height is 6½ ft (2m) from the ground. A ‘square’ is 100sq ft (9.25sq m.). A ton (tonne) of straw thatch, using the standard method of working, would cover between four and five squares of roof. A hundred bundles of water reed, would cover a square. Taking a good man a day, to manually harvest it. I have allowed for a thatcher, working alone, to cover half a square of standard thatching, in an eight hour day. A good average, given both wet and dry days. In the past, thatchers worked all the daylight hours… But details of their daily wages, seem to allow for around half a square, of completed work.

The above guidelines are based on modern estimating practices, of time and materials. Which are all we’ve really got to go on…

Images, from the following thirteen sub pages pages appear below…