Combed Wheat Reed; the best of both worlds…

Perhaps so, as this material combines the versatility of long straw with the convenience of water reed. The thatcher can cope with any roof shape, without spending hours; either yealming out long straw; or looking for those elusive fine bundles of water reed.

Combed wheat reed, is used to describe thatch that has either been cleaned out using a hand comb, or more likely today, been passed through a machine known as a Reed Comber. Unlike long straw, the stems are not bruised by thrashing and all the butt ends lie in the same direction. No one knows who had the idea of combing straw, to imitate water reed, or when. The term ‘rede‘, being applied to combed thatch, is first recorded in Britain in the early sixteenth century, in Somerset. Samples from existing roofs in Devon, take the practice of combing thatch back another three centuries at least. This county also lends its name to this material; Devon reed.

Unlike most other thatching materials, combed thatch has traditionally had a limited geographical range. For standard thatching, its use was universal; in the Channel Islands, The Vale of Glamorgan and from the middle of Dorset to Land’s End and it seems nowhere else in Britain. But interestingly combed thatch was also the material of choice, over a large part of north western France.

Mechanization came late to this material, the majority of thatch being produced by hand, until the First World War. I’ve met more than a few thatchers, who used hand combed reed in their youth; and every one of them said it was much better, than the ‘machine made reed’ of today.

There were several ways of hand producing the material… It could be very carefully thrashed with a flail; only hitting the heads of the sheaves. Or the sheaf heads were beaten over a receptacle, often a headless barrel, which collected the grain. Then the straw would be cleaned out. Either combed with small hand comb; or pulled through a fixed comb, often set on the top of a bench. 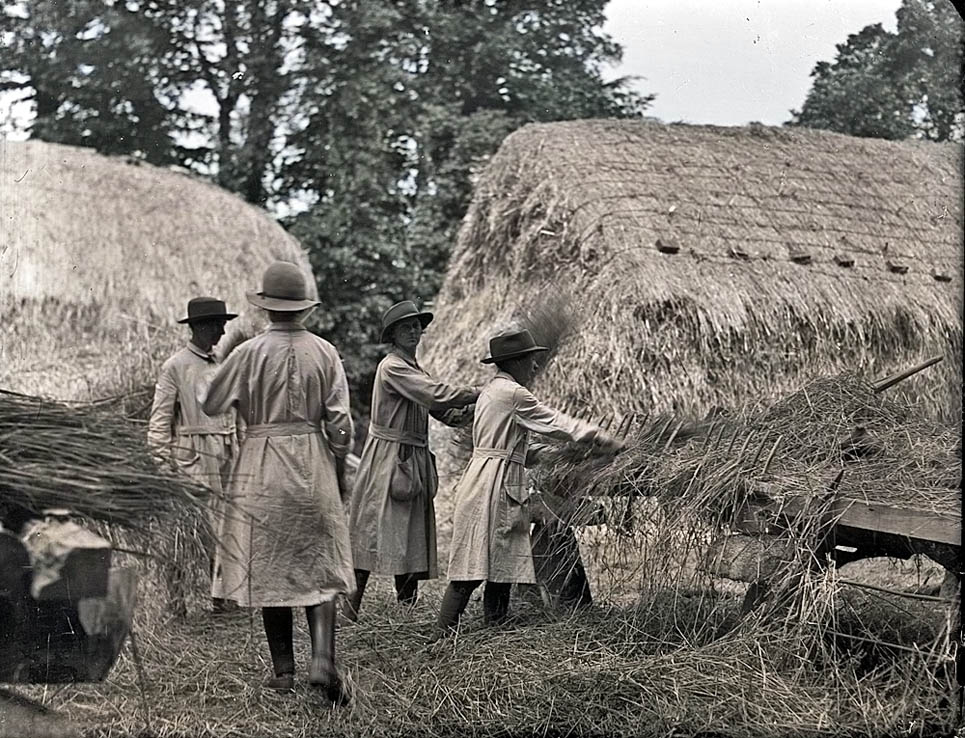 Members of the Womens Land Army during the First World War, on a training course at Tregavethan Farm near Truro; which took place in June 1918. Being located in the South West the students are learning the art of combing; by pulling the straw through wooden teeth… Photo. courtesy of Royal Cornwall Museum. 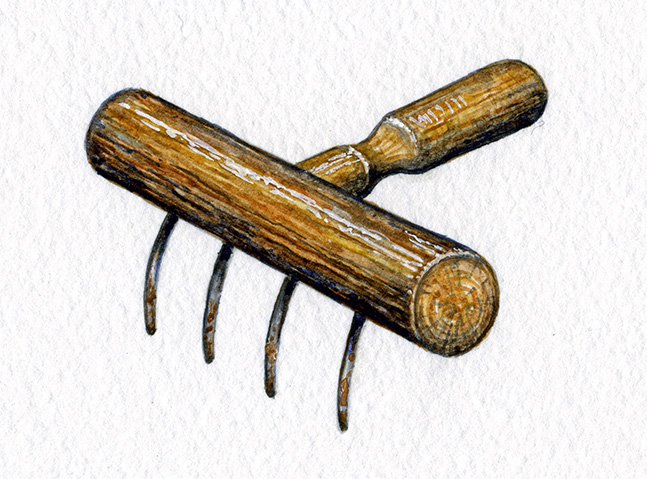 Combing by hand… A small hand comb from Guernsey. This little tool only sports four of its original five teeth; made from bent nails. The letters ‘PLPTR‘, stamped underneath, remain a mystery… Courtesy; Guernsey Folk Museum

A further method consisted of Drawing the reed out of what was often called a Reed Press. After working in the harvest fields, Thomas Hardy has his heroine ‘Tess‘ engaged in this work. Once again leaving a vivid description, of the time before ‘machine made reed‘…
‘Putting on their gloves all set to work in a row in front of the press, an erection formed of two posts connected by a cross beam, under which the sheaves to be drawn from were laid ears outward, the beam being pegged down by pins in the uprights, and lowered as the sheaves diminished…’

‘Tess’ pulled handfuls of straw out of the press; being under pressure they came out straight and clean. When she had sufficient, she cut off the ears with a hook, placing the stems in a forming bundle. (The ears would have later had a normal thrashing.) A smaller press is shown on the left… 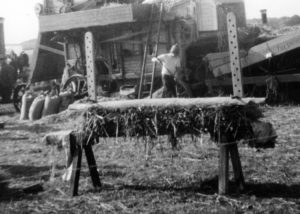 Hardy had Tess working in a midwinter barn, half a century after all the troubles over the new thrashing machines (as mentioned in the section on long straw thatch). Reed combing provided some valuable winter work. Perhaps this is why there was less ‘machine breaking’ in the West Country than elsewhere. Unlike yealming long straw, thatchers seem never to have been involved in any of the hand preparation with combed thatch. They simply fixed it on the roof.

The reed comber is not a machine in its own right, but an attachment fixed on top of a regular thrashing machine; appearing as a smaller wooden box on top of the big one. Not unsurprisingly the first reed combers appeared in Devon in the 1880’s but were slow to catch on. Being essentially a regional material, the big agricultural machinery manufacturers, were reluctant to make the investment and build combers. But by the 1930’s, they were a common West Country sight. 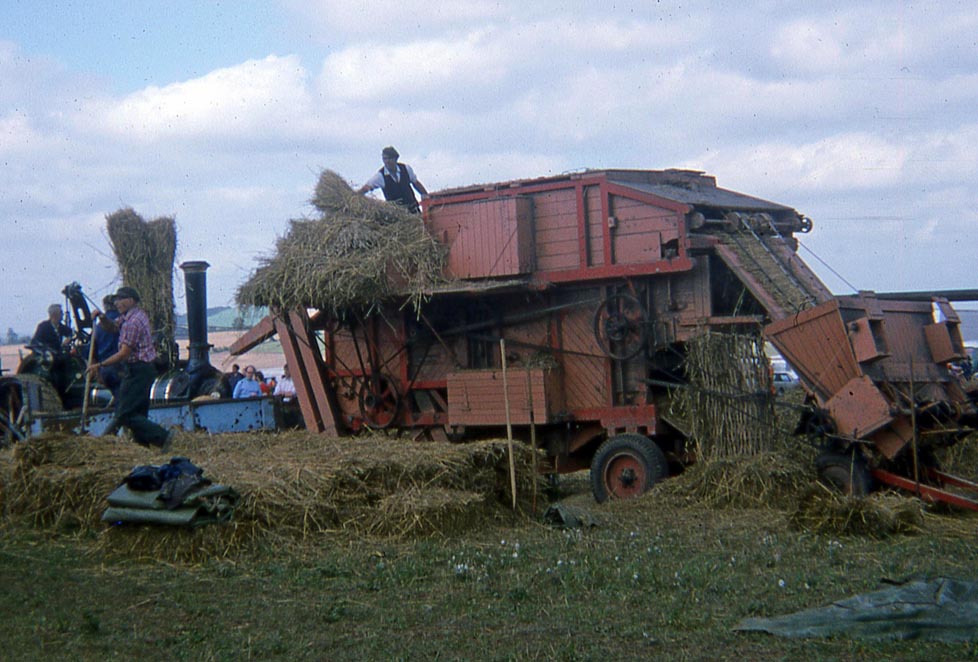 Double storey… A reed comber. Which is essentially a conveyor, on top of a thrasher… The two may even have been built at different times

Let’s take a quick tour, around a reed comber. 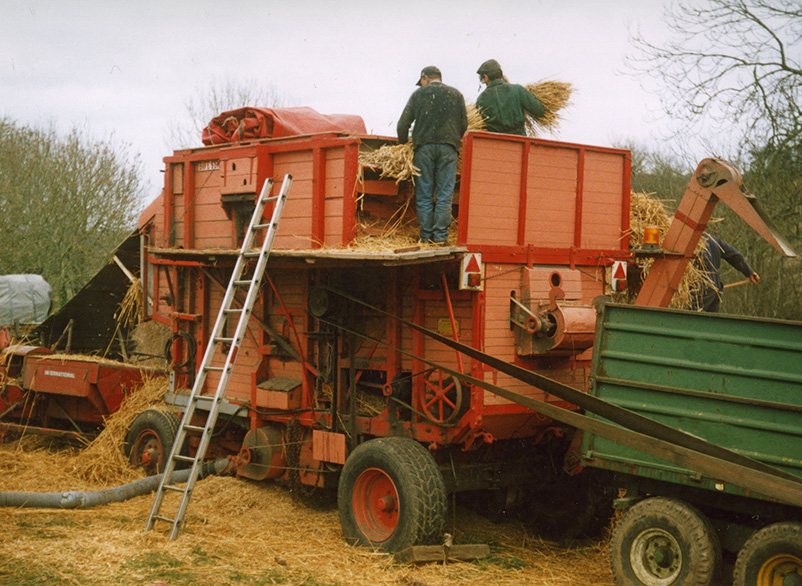 Feeding… An assistant takes the pitched sheaves and hands them over to the feeder. He then opens each sheaf and carefully puts it, crossways, with the ears in the same direction into the comber; between two belts, being driven by sprung rollers. 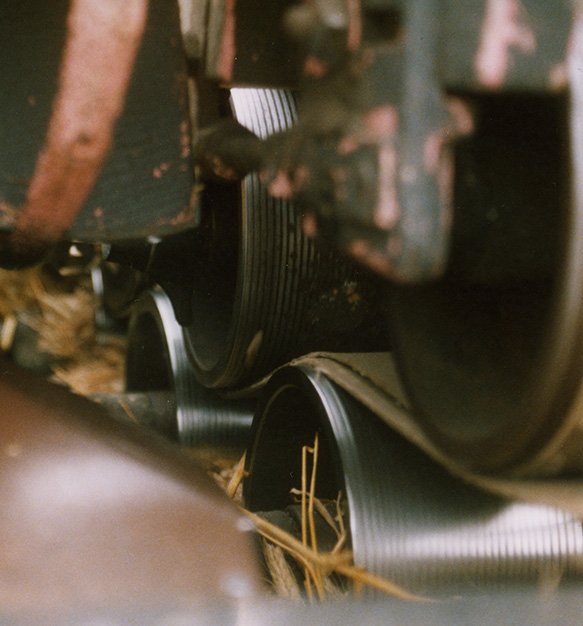 Detail… The sprung rollers and continuous belts, are the core of these machines. The belts catch and hold the stalks tightly, across the centre of the stems. And in a thin layer, between the belts, the wheat passes over revolving pegs; that comb the lower half of the stalks. Only the ears of grain, in the top half of the stem, are then exposed to the beating of the thrashing drum. 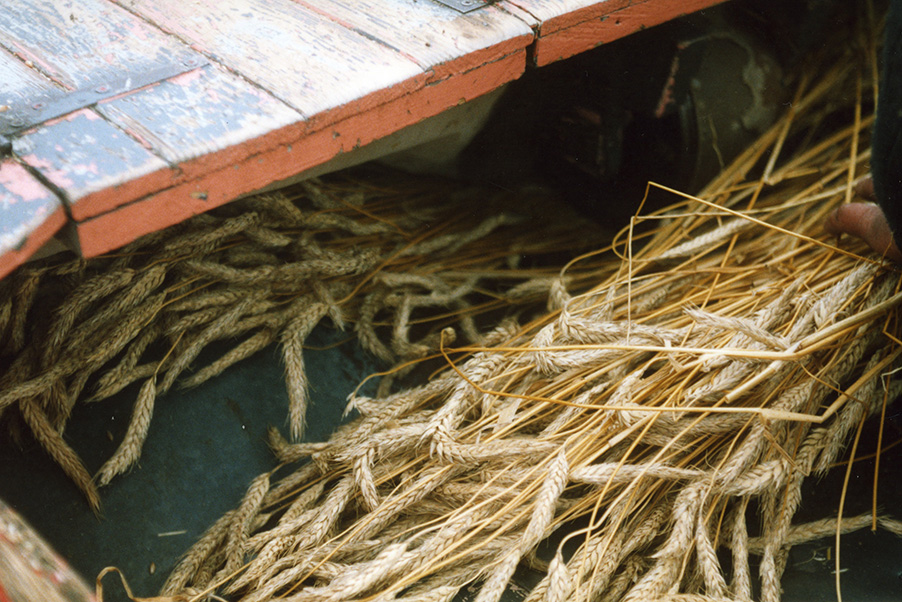 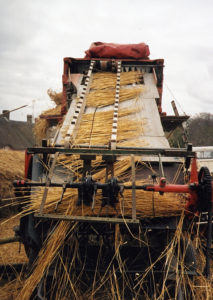 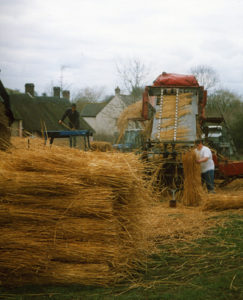 The end… The undamaged stems then pass along the conveyor, to the end of the comber; and usually into a tier. The ends are then butted, to level each bundle, and often trimmed. The reed is now ready for the thatcher. The grain and unusable straw are thrashed as normal, in the lower storey of the comber. 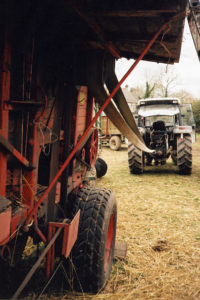 Power… Tractors have mostly replaced steam traction engines, to produce today’s thatch. But the belt drive remains the same. The power here comes from a tractor made by Lamborghini. I’m told they also make quite good motor cars… 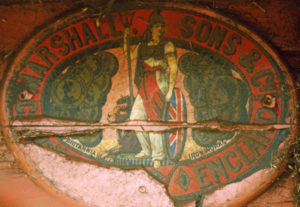 Best of British… Both thrashers and combers are now becoming quite venerable. No machinery of any note has been produced for well over half a century. The thrasher carrying the comber, in these last few photos, was built in 1908. It still proudly carries its maker’s name. The comber itself is two decades younger, hailing from an unknown workshop in Devon. It goes without saying that these machines were well engineered, but how much longer can the craft rely on them?

Although the comber saves a lot of tedious hand work; the process, as with ordinary thrashing is quite labour intensive, around half a dozen people are usually involved. Producing around four to five hundred bundles of reed a day. The bundles are either stored, or moved straight on to the thatcher. The material is usually sold by the tonne. Small amounts are sometimes sold by the bundle, when the supplier and thatcher have agreed an average weight.

As with long straw, the mechanical tier produces combed reed bundles of around 14lbs (6.3kgs). Around 35 of these will coat the 100sq ft square; or 3 to 4 bundles to a square metre. A tonne of about 150 bundles covers about 4½ squares or 42 square metres.

Meanwhile in Devon… The traditional bundle of combed wheat reed weighed 28lbs (12.6kgs); and in Devon was called a Nitch. This dates from the time of hand combing. Although only around half the weight, the standard bundle from the comber is still often called by this name. In Somerset, the late eighteenth century saw bundles of 56lbs (25kgs). At the same period, in Glamorgan, combed thatch was called Gawn and the bundles of this hand combed material were known as Whisps. Providing the local thatchers, ‘with wheat straw of uncommon neatness…’

A minimum length of 27 inches (670mm) is required for usable combed wheat reed. 3 feet (900mm) is ideal; but somewhere in between is usual. And as with long straw, a hollow stemmed variety is a must….