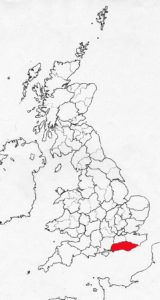 The craft here is not so widespread as in most other south coast counties; but a goodly number of thatched roofs are still to be found. The modern division of West Sussex having four times as many, as it’s sister East Sussex.

These two parts, along with the Brighton and Hove conurbation, make up the historic county, which lies completely within the area of the Southern thatching tradition, thatch often being multilayed; with rolled gables a local speciality. These are often quite square but all other thatching is fairly rounded. Long straw was the dominant thatching material, but is now rarely seen. Modern local thatchers creating the same rounded roof shapes, mainly in combed wheat reed… 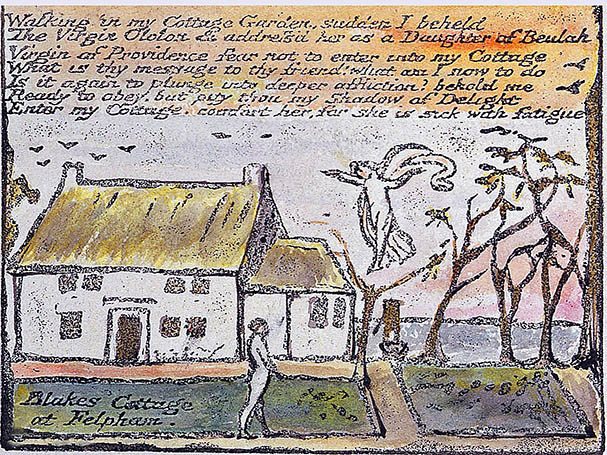 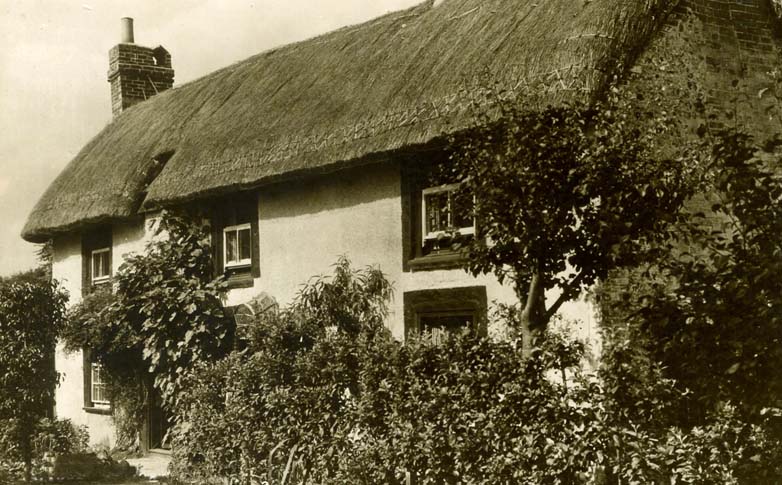 Visionary thatch… At Felpham the thatched home of William Blake, poet and painter, still stands. For a few years, from 1800, he lived and worked here, producing most of his epic poem ‘Milton’; famous today for containing the lines ‘and did those feet in ancient times’ etc. This little drawing comes from the poems illustrated text. Where William Blake is seen receiving a vision, in his thatched cottage’s garden. More prosaically the same garden saw him in an altercation, with a drunken soldier; with Blake being unsuccessfully tried for sedition, as a result.

The long coastline of Sussex still has several marshy river estuaries, which have provided other sources of thatching material in the past. As seen, in the History section, rushes were being used at Pevensey Castle seven centuries ago. Earlier still in 1187, the city of Chichester succumbed to a major fire. As ever, probably exasperated by the number of thatched buildings; roofs here probably being coated with reeds and rushes, harvested at the nearby coast.

Much later, in 1842; one James Bonniface was thatching ‘at the pad’. This is the site of a well known pub, The Sussex Pad, right on the coast east of Lancing. Whether rushes or water reed were used, his bill doesn’t say. But Mr Bonniface was paid three shillings and sixpence a square, for laying it. And two shillings and sixpence a day for ‘cleaning of reed’. The employer, who lived at nearby Salts Farm, no doubt supplying the material. As in many other parts of Britain, the availability of cheap long straw, that came with mechanised threshing, in the later nineteen hundreds, killed off these local alternative materials. 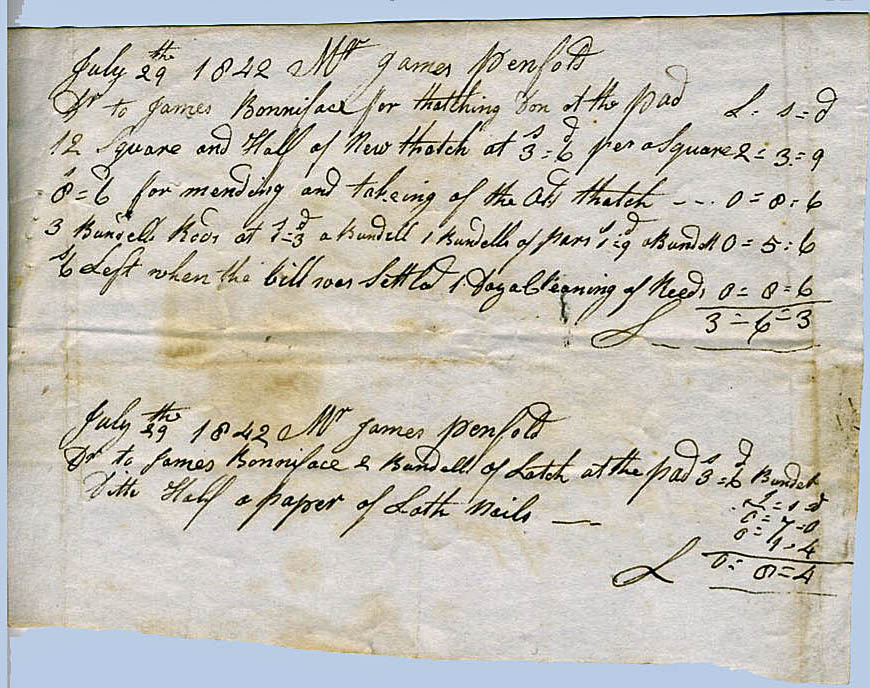 At the Pad… James Bonniface was charging around the same price, for thatching ‘per square’ (i.e.100 sq.feet), as Oxfordshire thatchers were charging a few years before… The building at this time was a favourite haunt of smugglers and was destroyed in a fire, in 1905. A tiled replacement still stands.

Law & Order…On the run in 1786; one Hugh Matthews, thatcher and smuggler hereabouts. I wonder if he was ever caught… The thatch shown below, lay a few miles to west of James Bonniface’s contract; at Salvington, a village now swallowed up by urban Worthing. The 1920’s image shows some typical Sussex long straw thatching. The cottage being the birthplace of John Selden, in 1584. A noted Jurist, and according to John Milton, ‘the chief of learned men reputed in this land’. His home did not survive beyond 1960; being replaced by a row of bugalows… 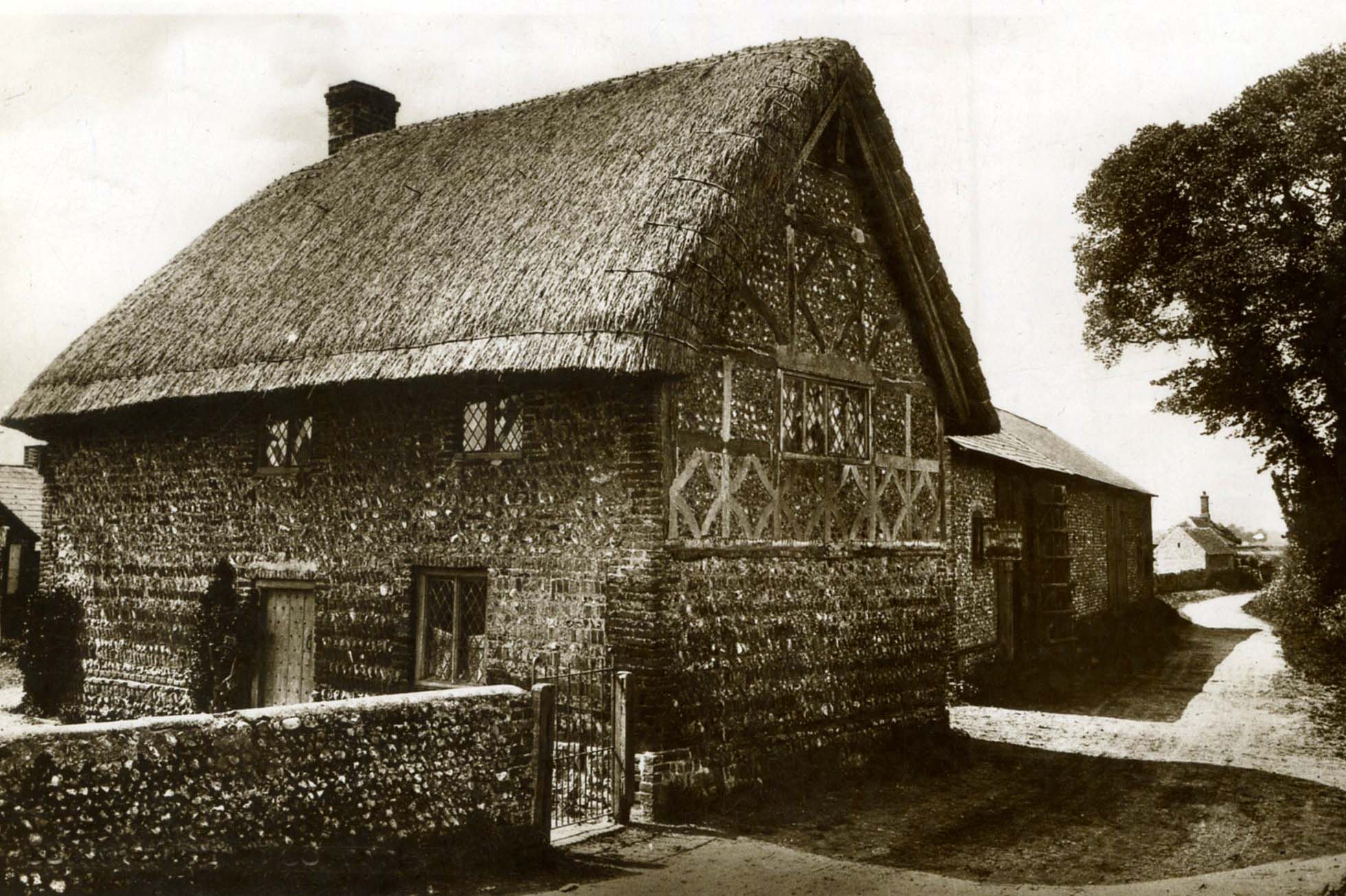 More visionary thatch… This time at Hove, a century after William Blake. The reverse of this postcard states… ‘This is ”Penstar”- the little white-washed, thatched cottage in which I first saw the light.’ It is signed by one David Davies; and is dated 1903. A quarter of century later he appears in records, as having lived at ‘Penstar, Palmeira Avenue, Hove’. Now he is a Baptist Minster but has fallen a little by the wayside, in being named as a bankrupt… A Miss C.H. Davies M.A., also gave this address, in 1906. So this long gone, long straw, thatched cottage, was likely here, when Hove was a fishing village, a century or so earlier… 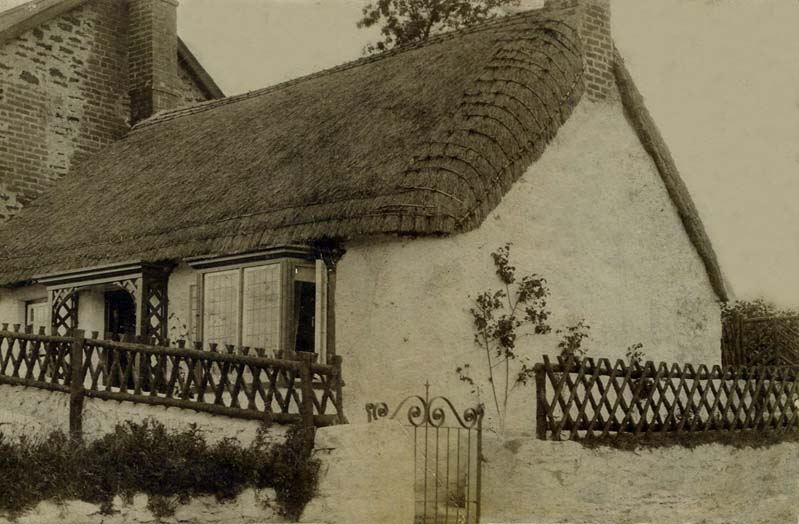 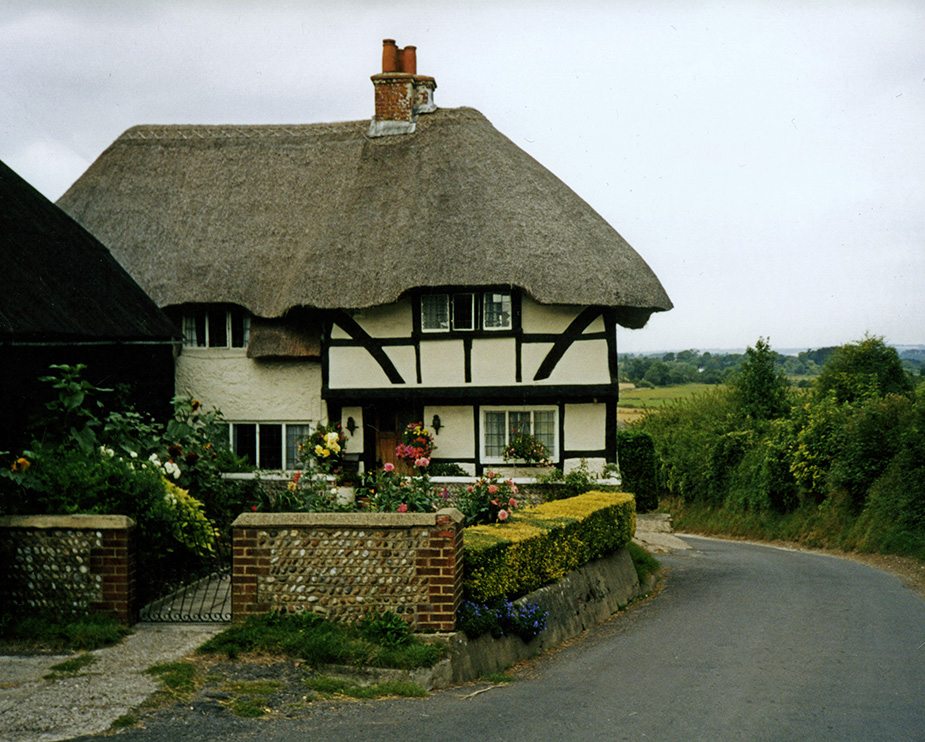 Wayside thatch…The upper combed wheat reed roof, at Houghton, sits in the Arun valley, an area which contains a great deal of thatching. Opposite is another image, dating from 1933; depicting a roof of long straw… Nearby lies the large roof below, at Whepham.Showing a square rolled gable end, to a combed wheat reed thatch. 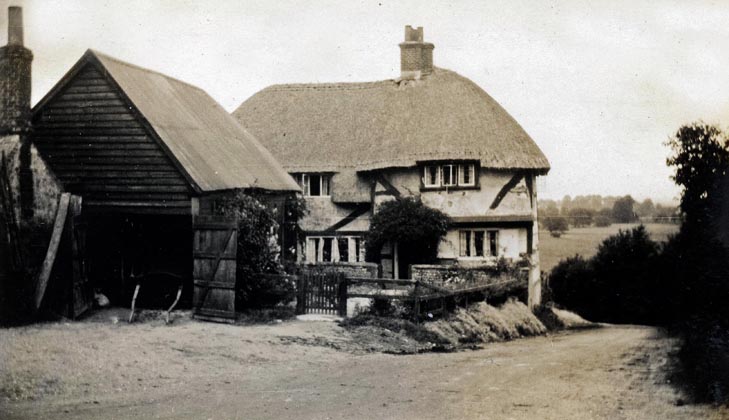 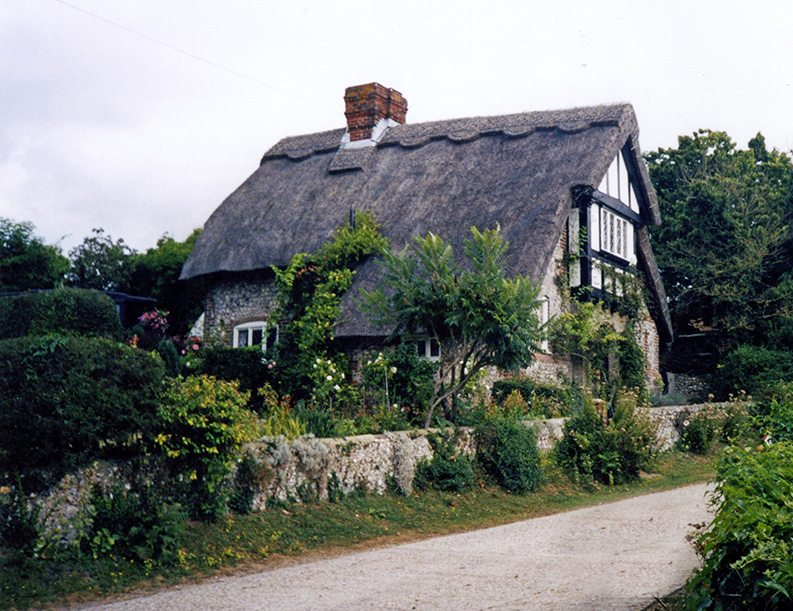 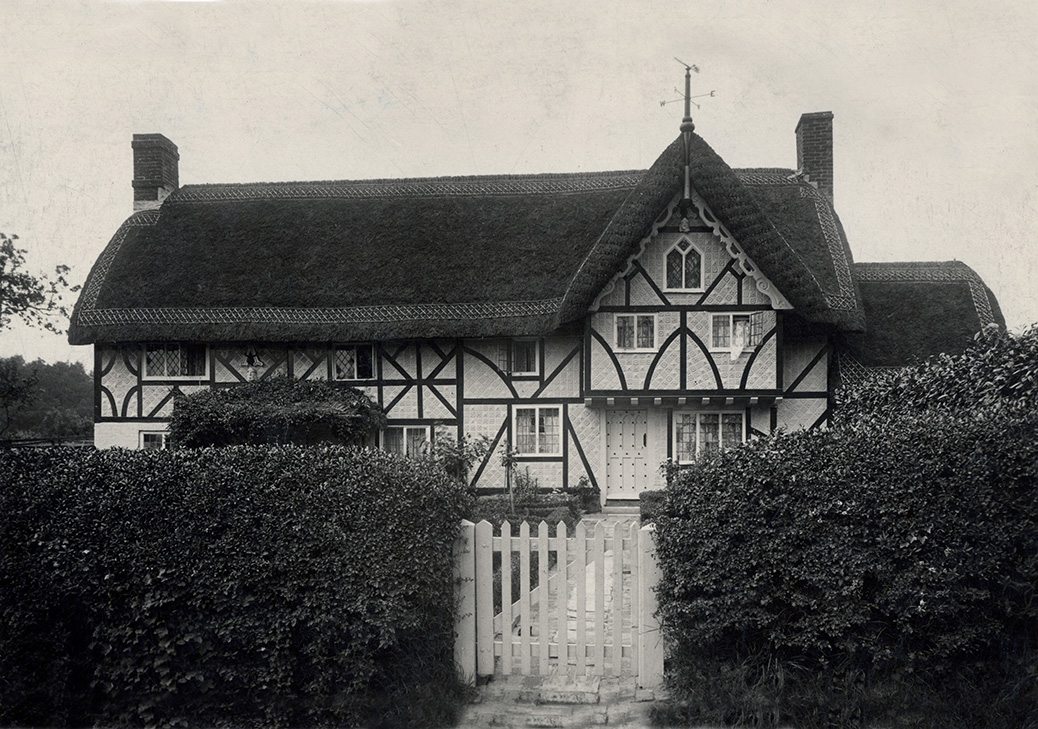 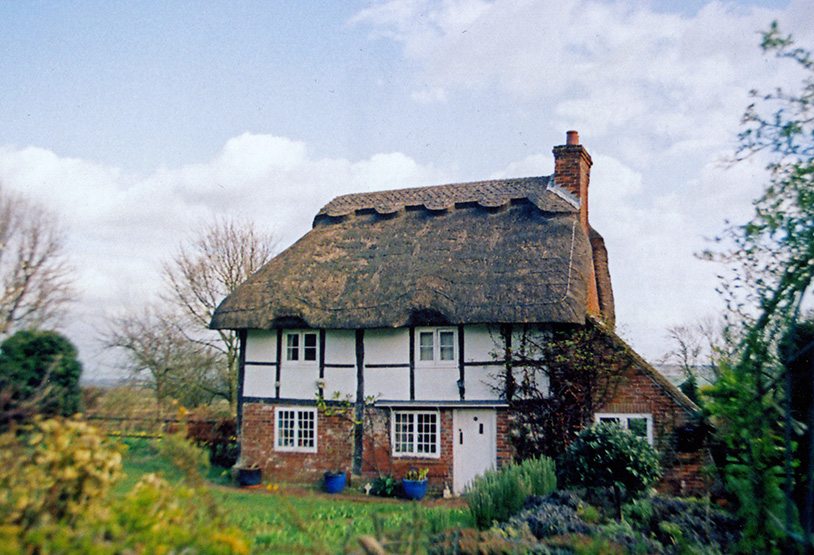 East Sussex thatch… There are fewer thatched buildings in this part of Sussex; the left hand cottage at Alcriston, being an attractive example. The upper, well thatched long straw roof, at Eridge, with its thick rolled gables, has sadly gone. Below is a scene from St Leonard’s Park Hastings, showing a heather coated shelter, a popular thatching material, in around 1900. 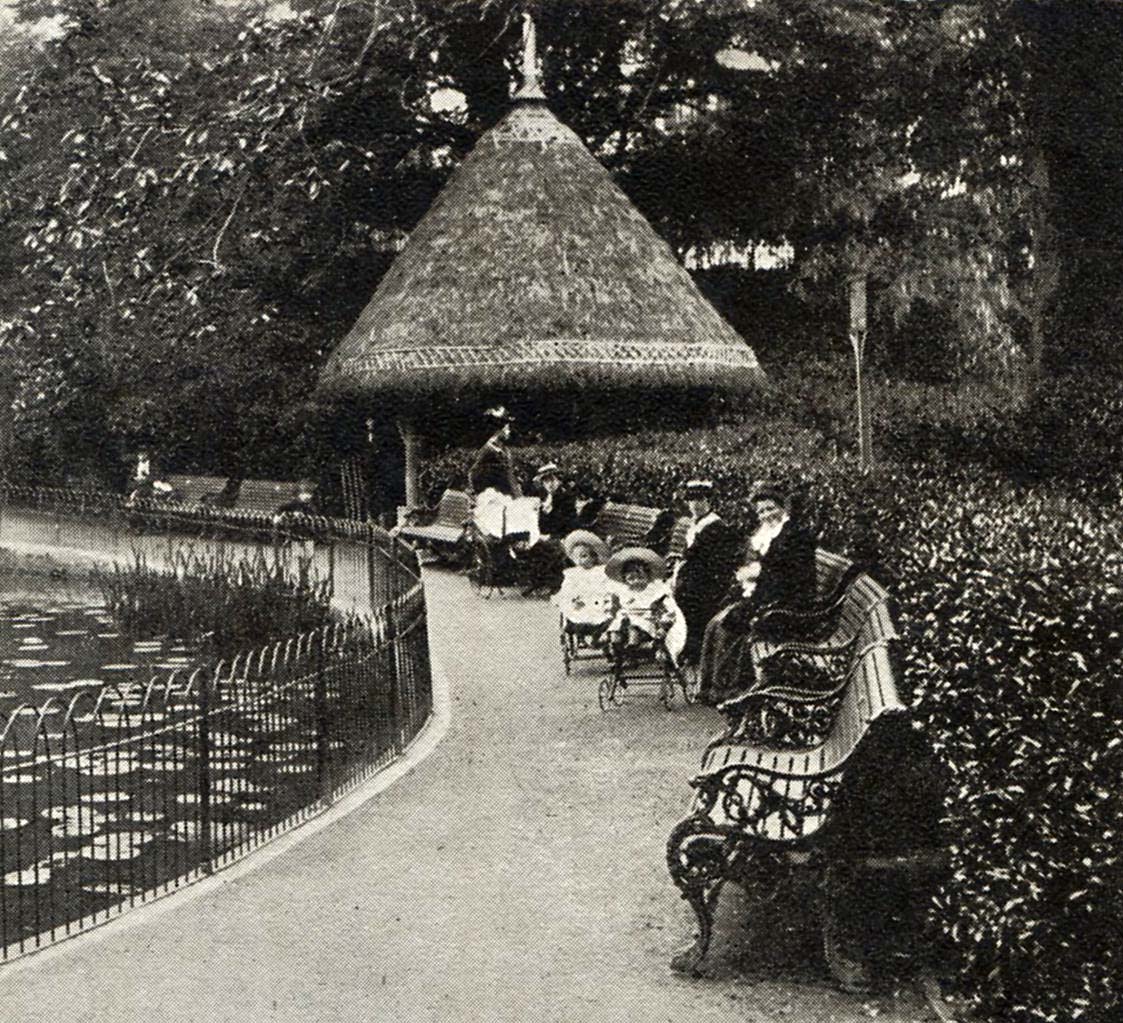 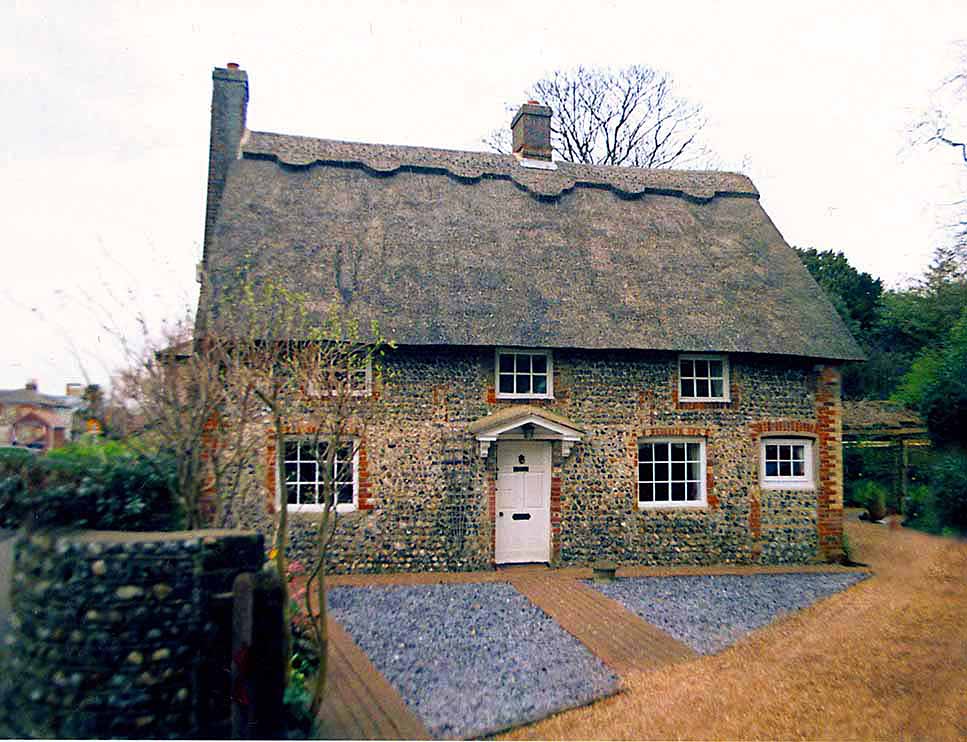 Coastal thatch… Near the sea, above, at Kingston by Sea. Here the pebbly beach seemingly provided some of this cottage’s building material, three centuries ago. The Edwardian image opposite was captured at Old Shoreham; depicting some well laid , plain long straw.An old timber framed structure, hides under the stone and brick, in the lower cottage, at Sidlesham, near Chichester Harbour. An area with a great deal of thatch. This roof has a long straw sparred edge, but the roof is of combed wheat reed. 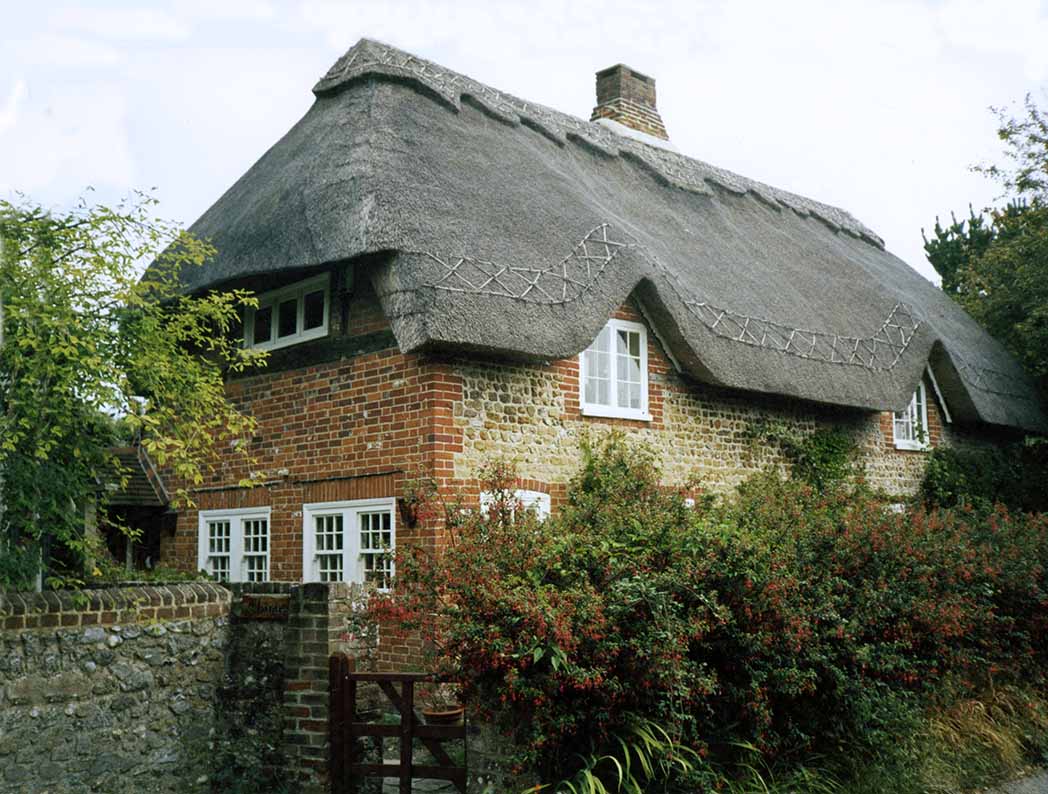 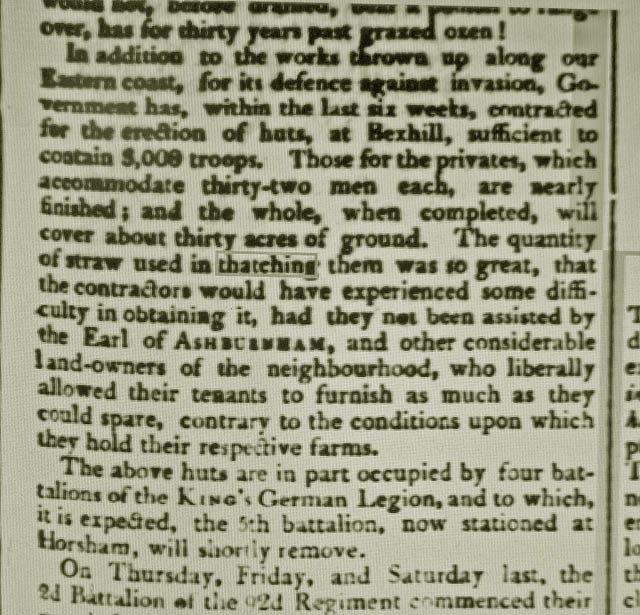 More coastal thatch… The newspaper article opposite, from December 1804; notes a very large amount of work at Bexhill on Sea; then a village of around a thousand souls. The thatching of soldier’s winter quarters was apparently fairly common; captured in the images of a 1915 camp in Essex below; along with a medieval one, showing similar structures. No doubt the Bexhill thatch was much the same. The King’s German legion, above, made well behaved and popular neighbours… 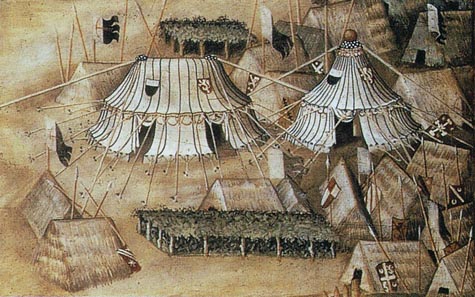 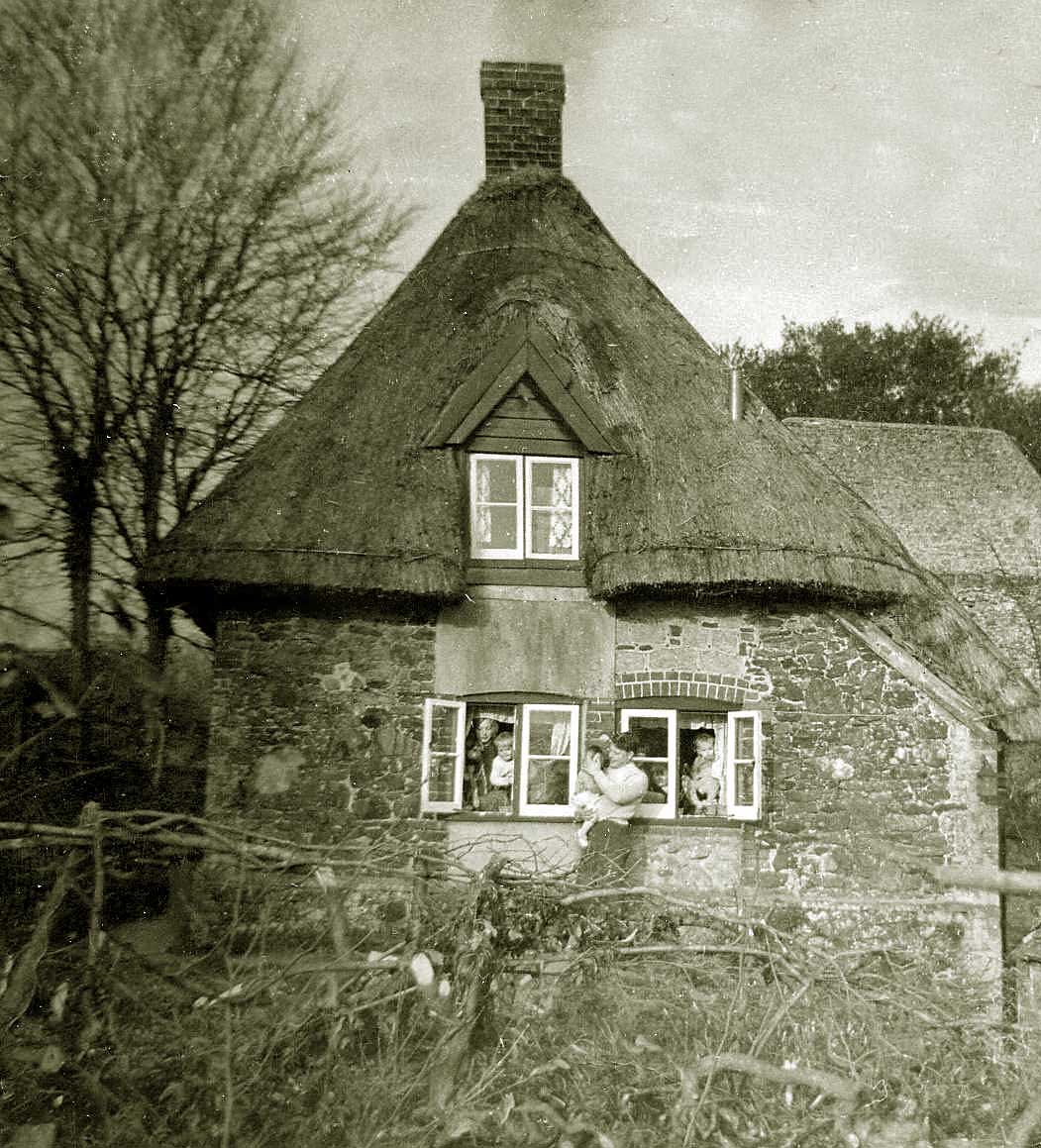 Happy families… A family home, in the early 1960’s, at Nutbourne, near Pulbourgh. A thick multilayered long straw thatch keeps all dry here. Photo courtesy of Frank Riddle. Below is more old Sussex long straw… At Midhurst, on the left, a century ago. And at Harting, in around 1930. This right hand image shows a very rounded roof. The modern cottage now has a steeper squarer thatch, in combed wheat reed.

In thirtheenth century Midhurst, a local thatcher was recorded in rather unusual circumstances…. James, son of Sir John de Bohun, local lord of the manor, was born on 3rd February 1281; ‘’prematurely, as a result of his mother’s falling downstairs, and hastily christened in Ford church; his godparents being James a thatcher and ‘Lame Joan Hope’. His mother survived. One wonders if the child was named after his new godfather, but I doubt it… 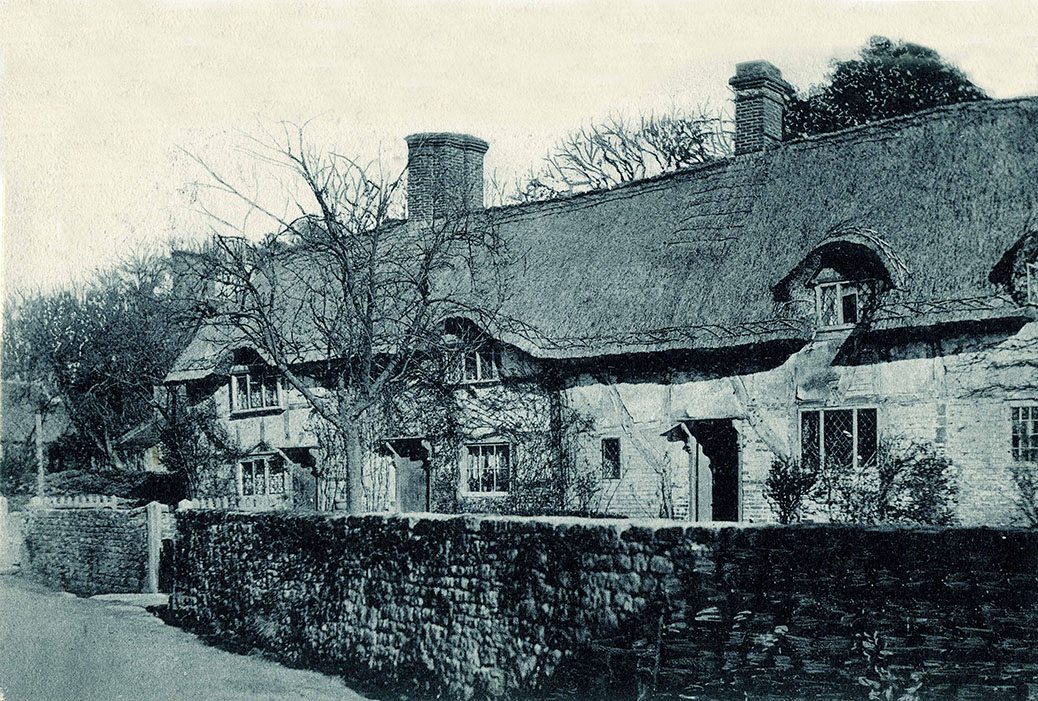 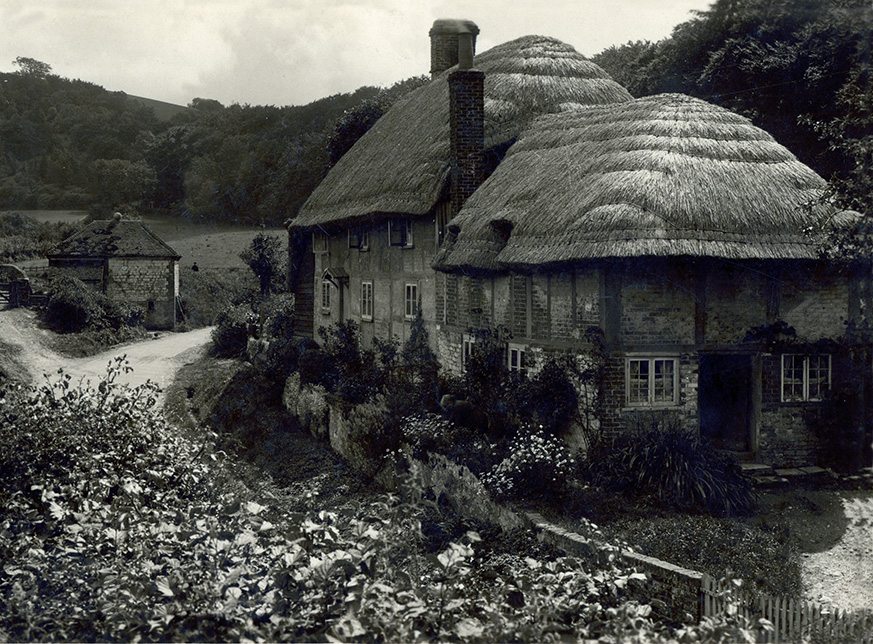 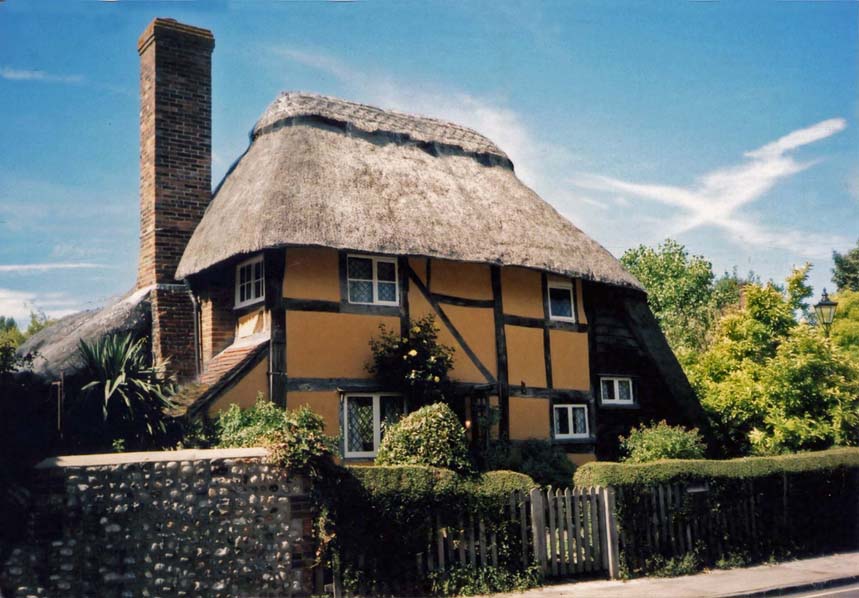 As in Kent, a handful of full sized, medieval, ‘Wealden’ hall houses, have also kept their thatched roofs, in this historic county…. 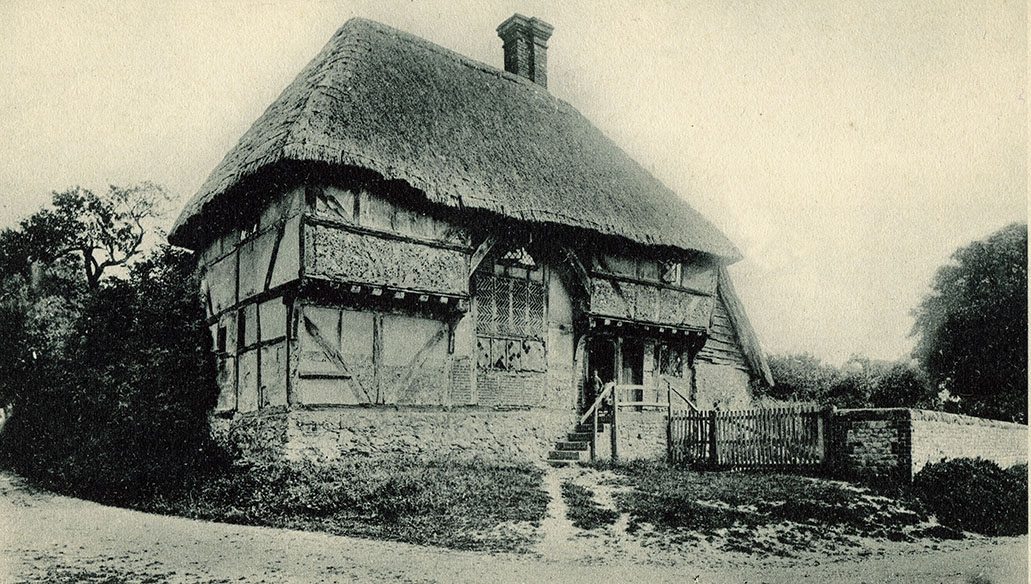 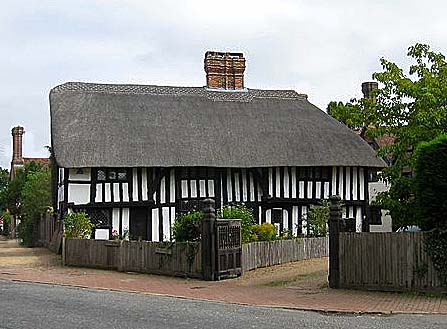 And finally another one… 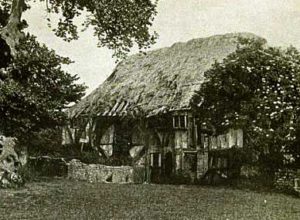 The very first building, saved by the National Trust, was thatched; acquired in 1896, just a year after the Trust was founded… The Trust laid out, the princely sum of ten pounds, for the medieval Clergy House, at Alfriston. Looking at the building, before it’s purchase, some would say they were overcharged!

‘Tiny but beautiful‘, is how one of the Trust’s founders described their first property. And from looking at this 1890’s image, it seems the Trust acted just in time. The building they saved, could well date from around 1350 and had been church property for half a millennium. Photo; from ‘Chaucer and His England’, by G. G. Coulton 1908 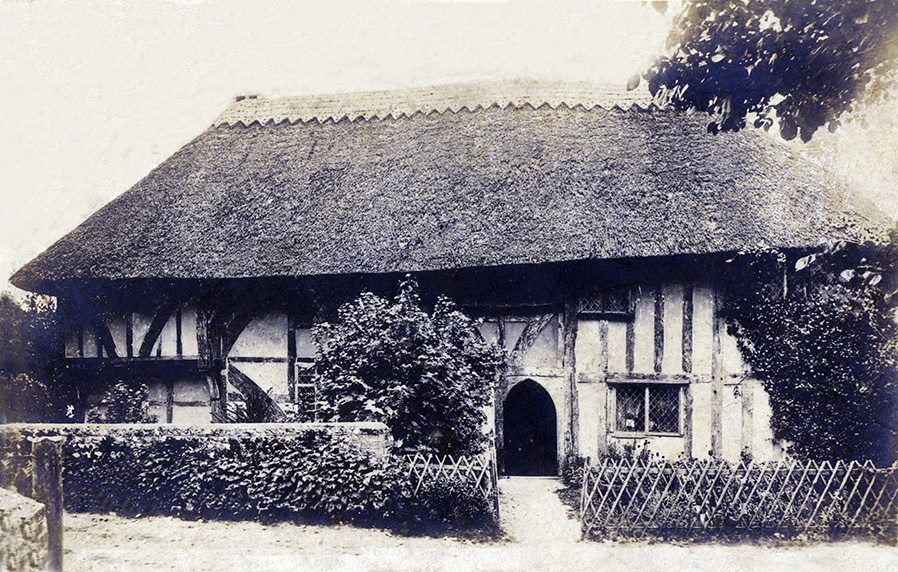 After… This image shows the renovated Clergy House, in around 1905. Now sporting a roof of water reed with a fashionable ‘saw tooth’ ridge. Looking very smart, but not very authentic, as the thatching hereabouts, is traditionally done with long straw… Like many, from before this time to the present day, the Trust thought water reed to be a superior material. The Oldfield family of Whittlesey, seem to have been involved in the early thatching here; using the methods, style and materials of East Anglia. (They pop up in the page on Cambridgeshire.) 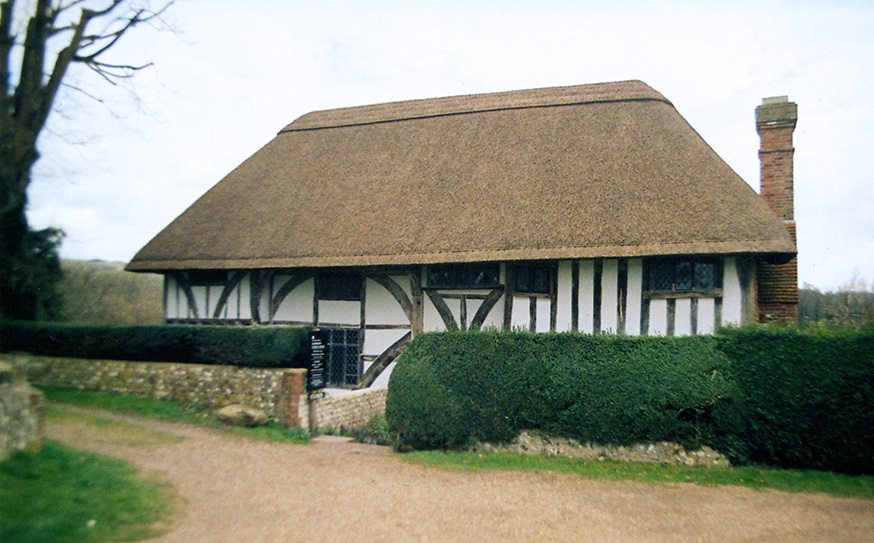 As before… Only in the last few years, have local thatching styles and materials regained their importance, to those in the conservation profession. So when this building recently needed a rethatch, a roof of long straw was completed. Finally going back to the thatching material, used before the Trust‘s purchase. However, this village lies close to the River Cuckmere. It’s flat valley, may well have provided crops of rushes in the past, a thatching material used in 1300, at Pevensey Castle, less than ten miles away. We’ll never know the exact sequence of materials, as the historic underlayers of thatch, disappeared in the original restoration. But thanks to the Trust’s foresight, there is a least a building to speculate over…