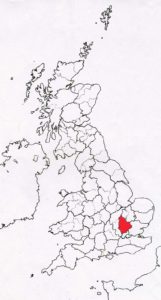 Although these two counties lie at the western edge, of the Eastern tradition of thatching; both shires follow this style closely.

Long straw was the dominant material in both counties, until recently, with many examples still remaining; especially in Hertfordshire. Even when combed wheat reed is used, it’s usually finished in a long straw manner.

Bedfordshire seems to be the home of a great deal of ‘picturesque’ thatch. Being found on properties built in the ‘Cottage Orne’ style… It appears many large country estates housed their tenants thus, in this county. Even their religious needs could be attractively catered for, in the splendid chapel at Roxton.

Today’s thatch is scattered widely over Bedfordshire; with areas in the north and east, containing most of Hertfordshire’s examples of the craft. Both historic counties having much to show… 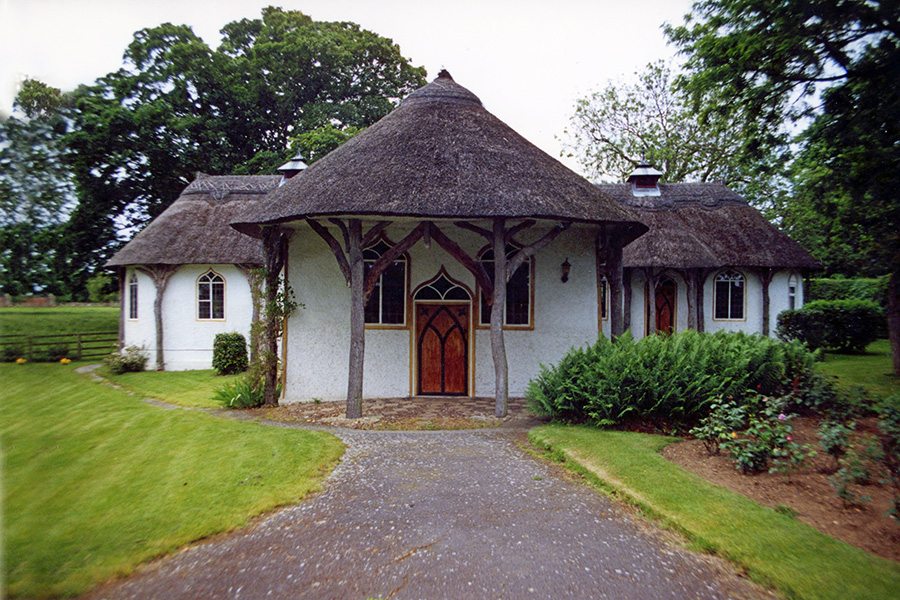 Roxton Congregational Chapel… Which started life as a barn. Being converted, in the early nineteenth century; in the fashionable ‘Cottage Orne ‘style.. Below are two further examples of this design, at Old Warden., many converted buildings, being based on earlier existing cottages…. 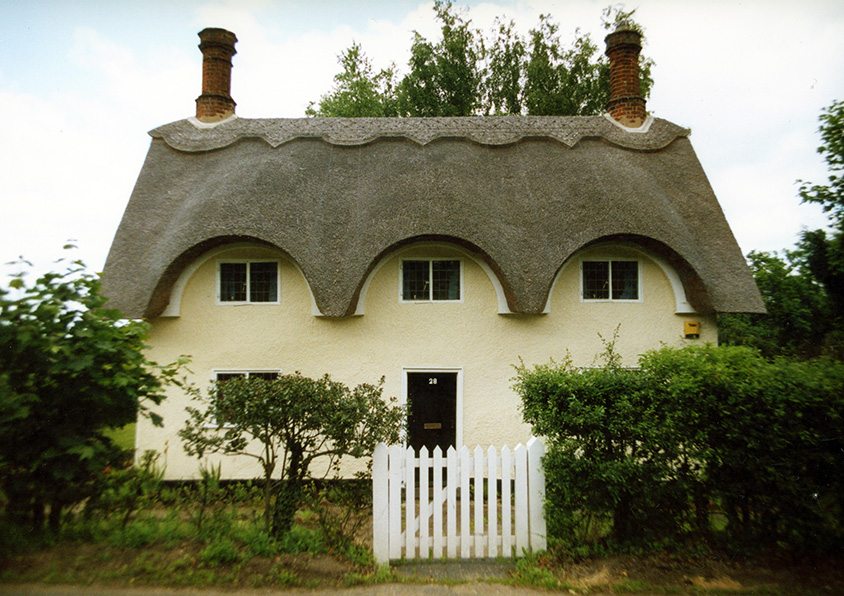 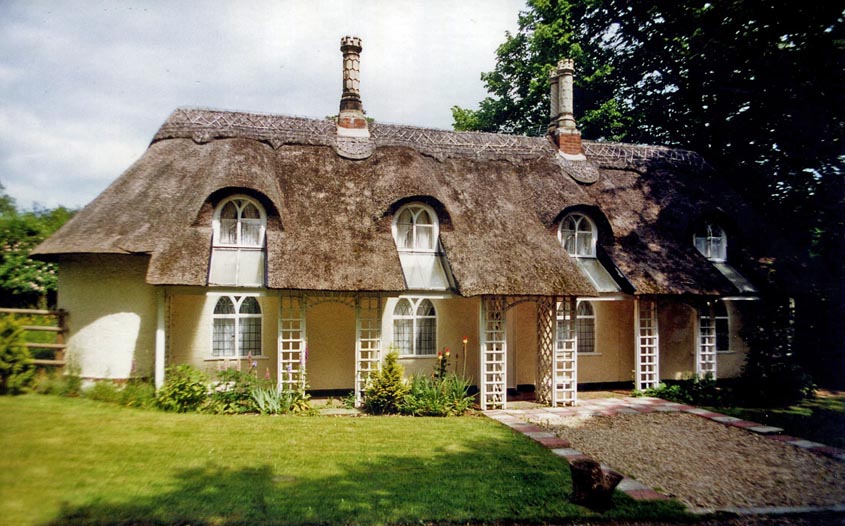 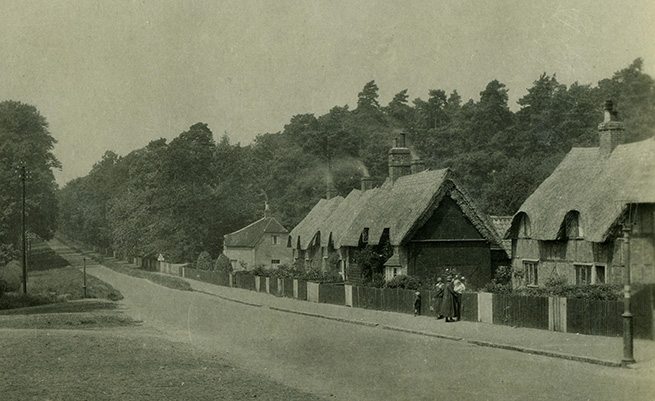 The above cottages are still a landmark, in Ampthill. Being yet another group of ‘Cottage Orne’ dwellings, dating from around 1815 and must be just over a century old, when captured here. Shown are thick, multilayered long straw roofs. Not so the modern thatch, as these mock Tudor cottages, are now covered with combed wheat reed. 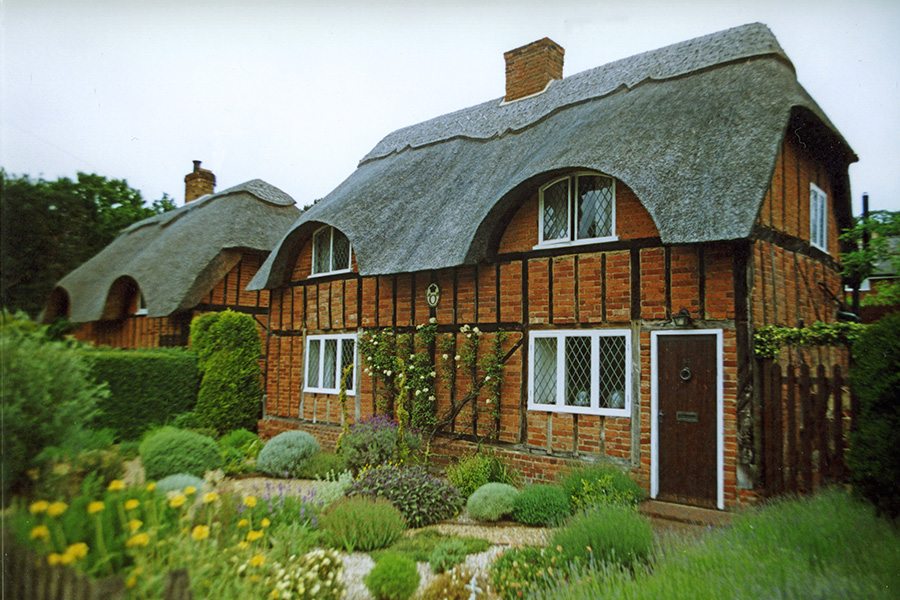 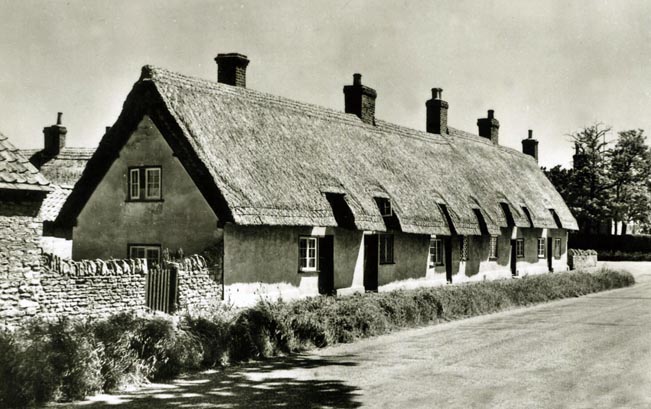 Bedfordshire thatch…Above is a row of angular, long straw cottages, at Biddenham, in around 1930. The right hand, understated butcher’s shop, is at Sharnbrook… As is the long straw, thatched cottage below, which has a similar roof, to those in 1920’s Ampthill. But this thatch’s thick underlayers are neatly covered over, on the gable ends. 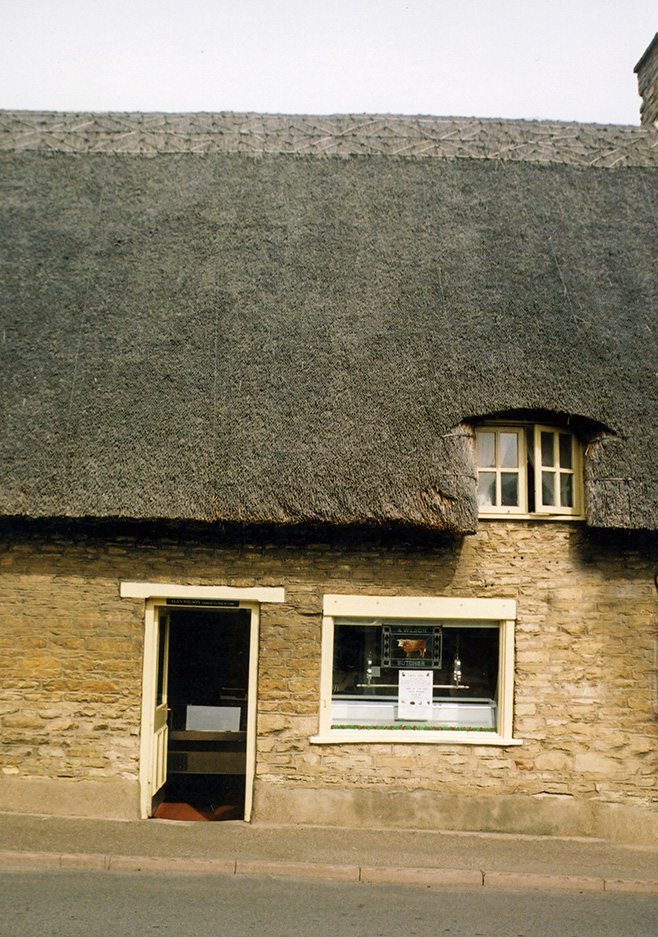 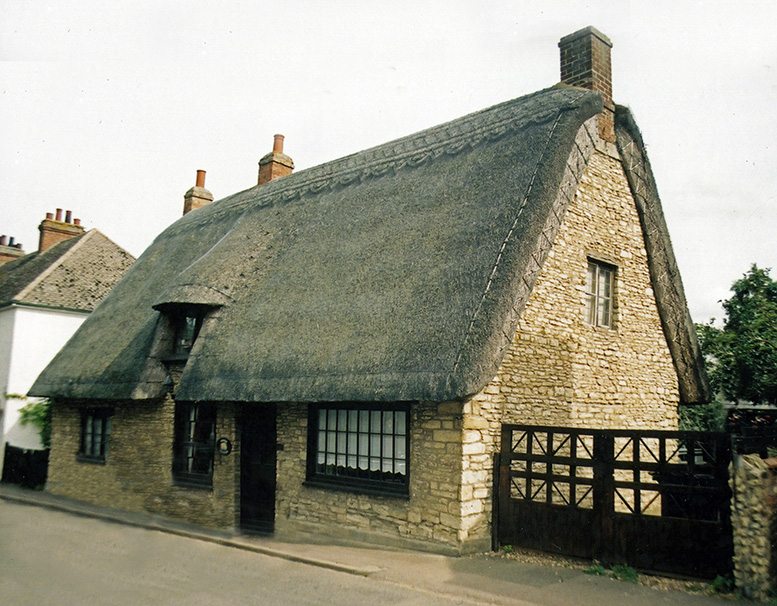 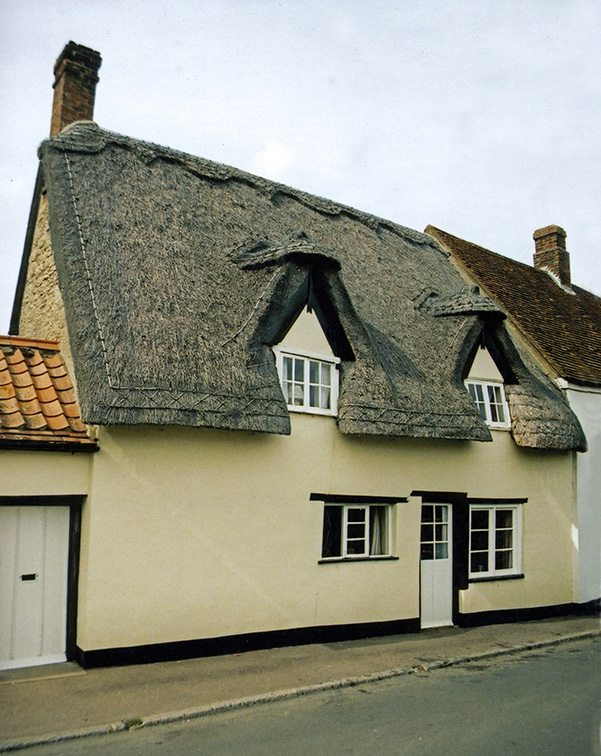 Single storey… Both the above cottages, started life in the seventeenth century, as single storey dwellings. The lower, long straw thatch, at Stevington, shows the angular Eastern style well. 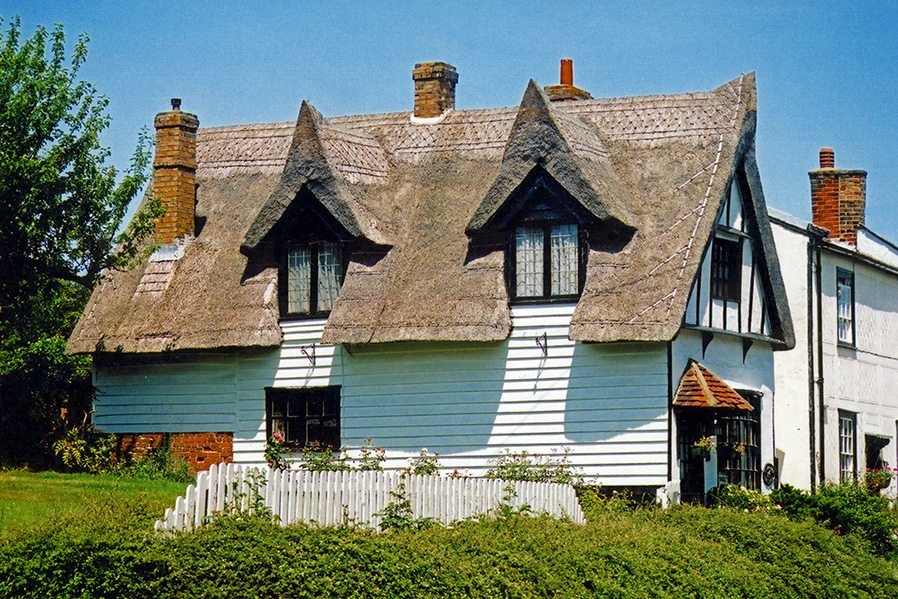 Sharply cut ends… Some angular Eastern thatch, above, at Little Hadham. Where a new flush ridge, protects a long straw roof. Both ridge and coatwork are fairly new, on the lower roof, at Great Hormead. Both roofs showing what type of ridging was used, in this county, before the invasion of the ornate, cut block  varieties…. 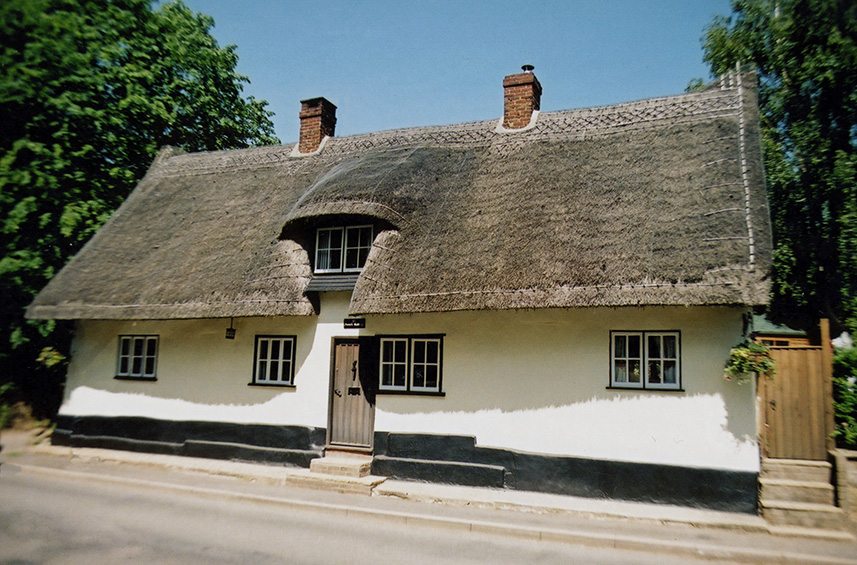 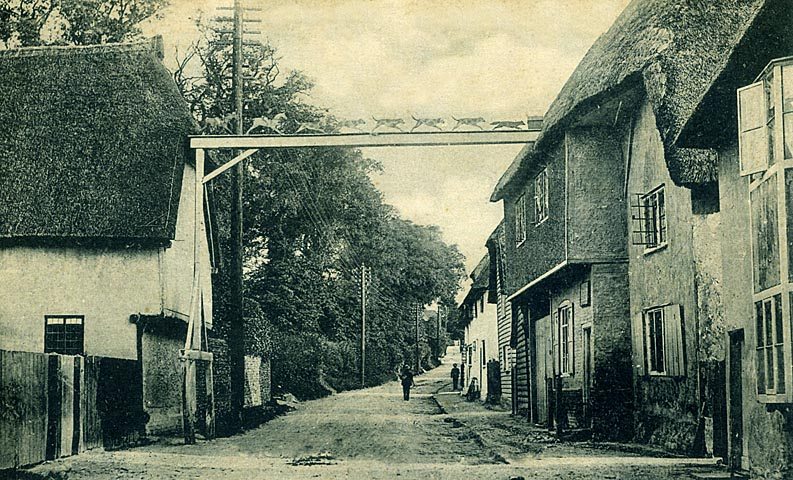 Sign of the times… This Edwardian image, shows the ‘Fox and Hounds’ at Barley. Above the splendid pub sign run new telephone lines… Today, the cables are underground, the sign is still in situ, but the pub has lost it’s thatch… 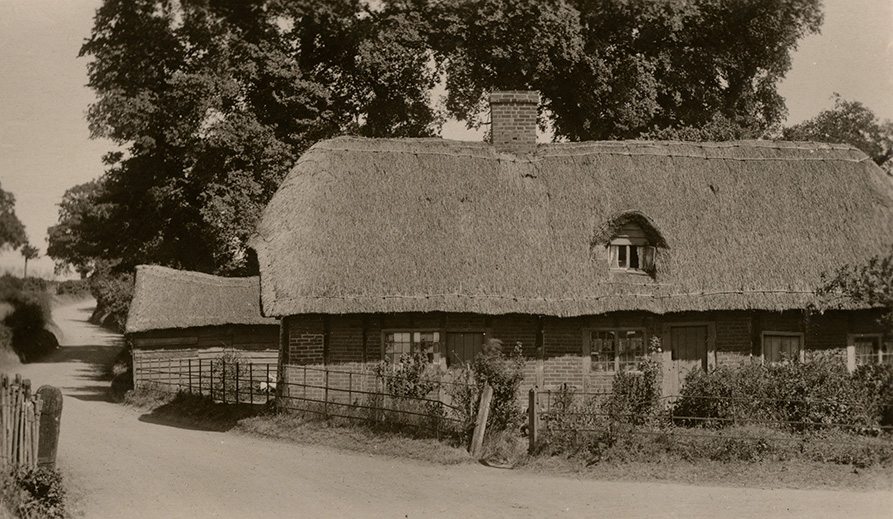 Still extant…a long low dwelling at Batford Mills, near the River Lea, around 1900. Although altered this cottage still has it’s thatch. 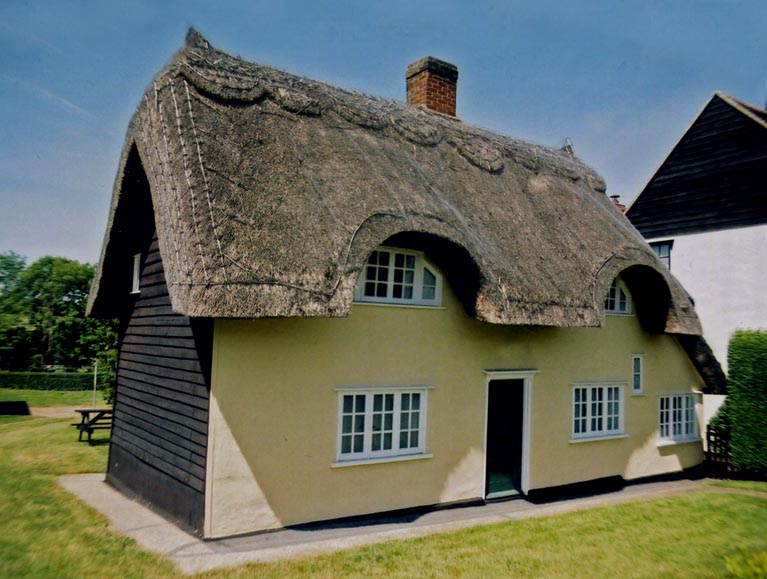 Family affair… The early 1850’s invoice/receipt opposite is fairly self explanatory; in that one Edmund King, was paid for thatching the hay ricks of Mr Hudson. The location of the work isn’t noted but census records appear give one and also shed some light on the King family of Hertfordshire, thatchers… The work was completed at around the same time as the 1851 census; it gives an Edmund King, thatcher, living at Datchworth aged 35, married to Jane Chapman from London; with a young family. ‘Mr Hudson’ was William, a ‘Landed Proprietor ‘from nearby Frogmore Lodge, Aston; he died shortly afterwards aged 93. This probably explains why our man had to wait over a year for his money, while the Hudson finances were sorted. As seen, Edmund was engaged in thatching William Hudson’s hay ricks at 1s&3d a square. This was around half the rate for house thatching; but the work was much faster. Rickthatching is explored in greater detail on its page HERE . Edmund was not working alone, the Datchworth census has a likely brother Thomas as a thatcher and Edmund’s probable brother in law William Chapman, ‘thatcher’ was living with the family. Thirty years later members of the King clan were still thatching hereabouts. But not Edmund, who died in 1872. 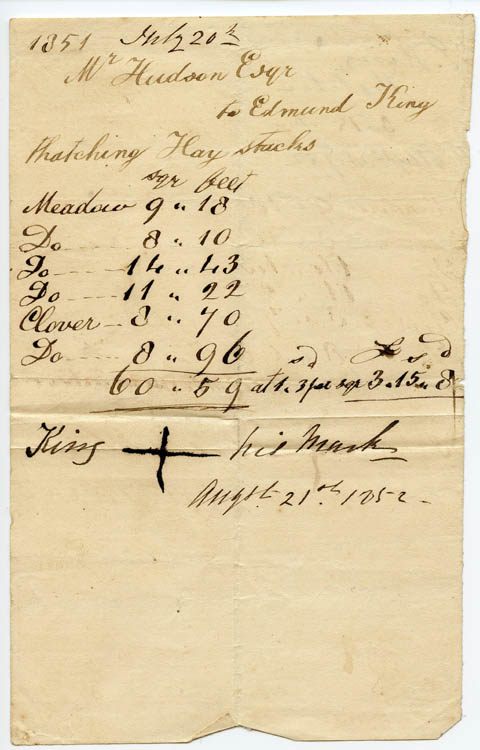 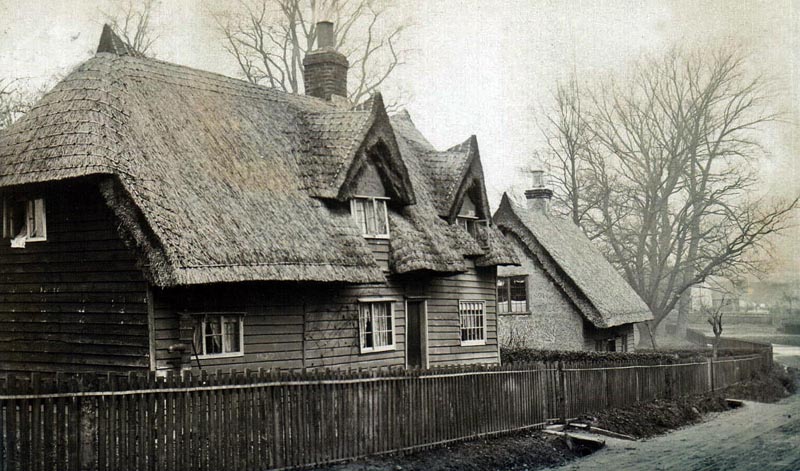 On the border… Typical long straw cottages at Gilston, just north of Harlow in Essex. The image dates to a time long before this village’s neighbour became a large ‘New Town’. The nearest roof has had some repairwork, in addition to a new ridge; a great many broaches/spars being used to fix down both… 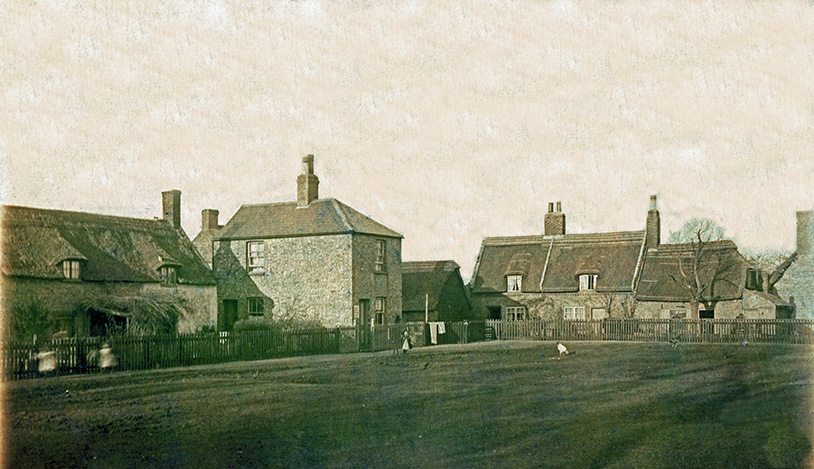 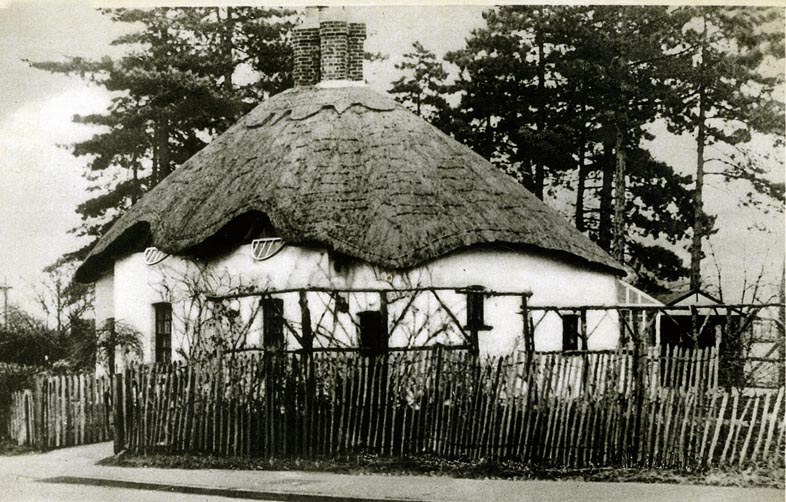 Metro land… On the left, ‘The Green at Croxley Green’, in the very south of Hertfordshire. These thatched cottages were captured, just as the Metropolitan Railway arrived close by, in the late nineteenth century. Bringing an easy trip to central London, for the many commuters who settled hereabouts. The green survives, but the thatch has long gone… Unlike the cottage on the right, at Shenley, like Croxley Green, less than twenty miles from Central London. This thatch and others are still going strong. Built in the ‘Cottage Orne’ style, around two centuries ago… 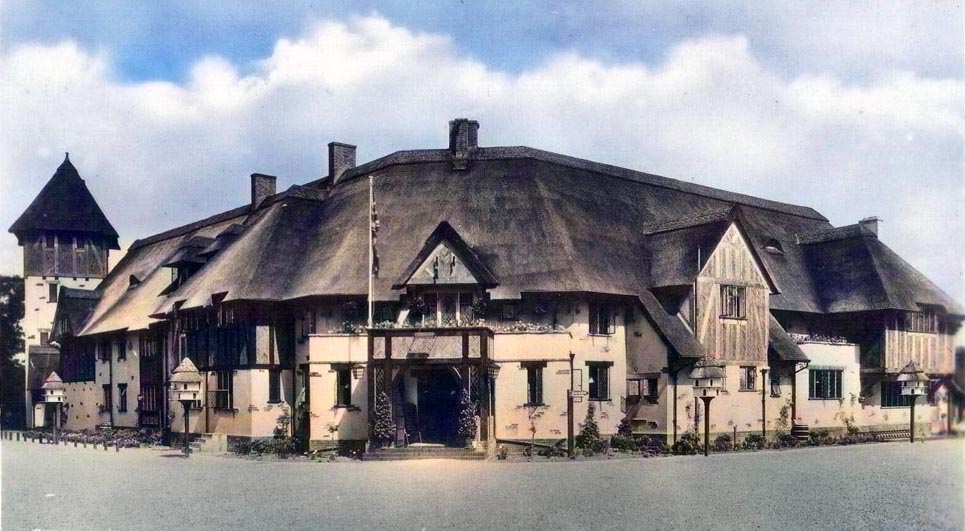 Thatch fit for the stars… Those of the silver screen in this case. Above is the ‘Thatched Barn’, which once graced the Barnet By Pass, near Borehamwood, and the Elstree film studios and close to London. Opened in 1934 it became popular with film crews and actors; Bette Davis being one; this image dating to that time. The thatch is very likely Norfolk reed; fixed by thatchers from East Anglia; going for the ornate style, required by the owner a Mrs Merrick. After government use in and after the Second World War the building returned to being a hotel; until demolition in the 1980’s…

Finally… Surviving thatch in both counties, once sheltered some well known persons… 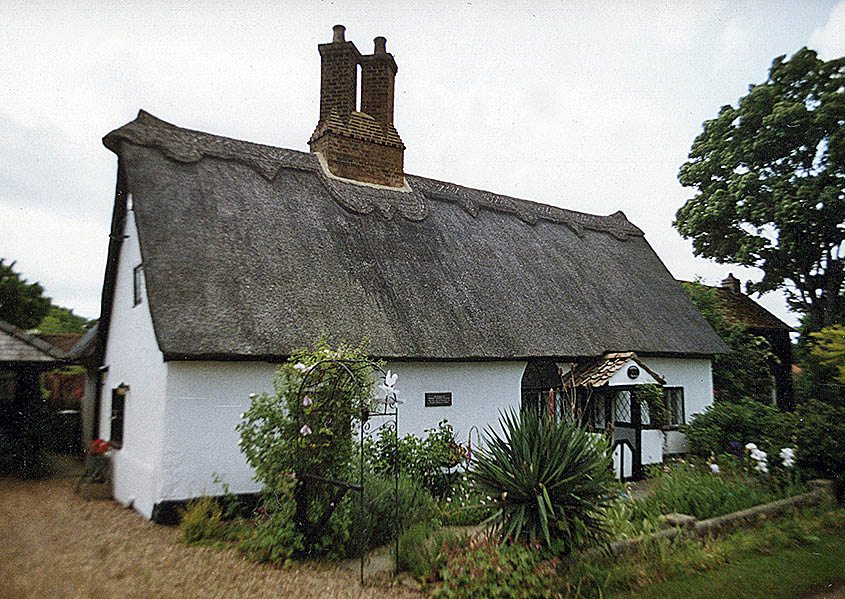 A blacksmith’s cottage… This single storey thatch, in the Bedfordshire village of Northill, was the birthplace of Thomas Tompion, in 1639. Son and apprentice, of the village blacksmith and famous enough to be buried in Westminster Abbey, seventy four years later. Moving to London he became: ‘The father of English watch making‘. More than few of his masterpieces are still marking the hours. One in the pump room at Bath since 1709 and two in Buckingham Palace, that need winding but once a year… 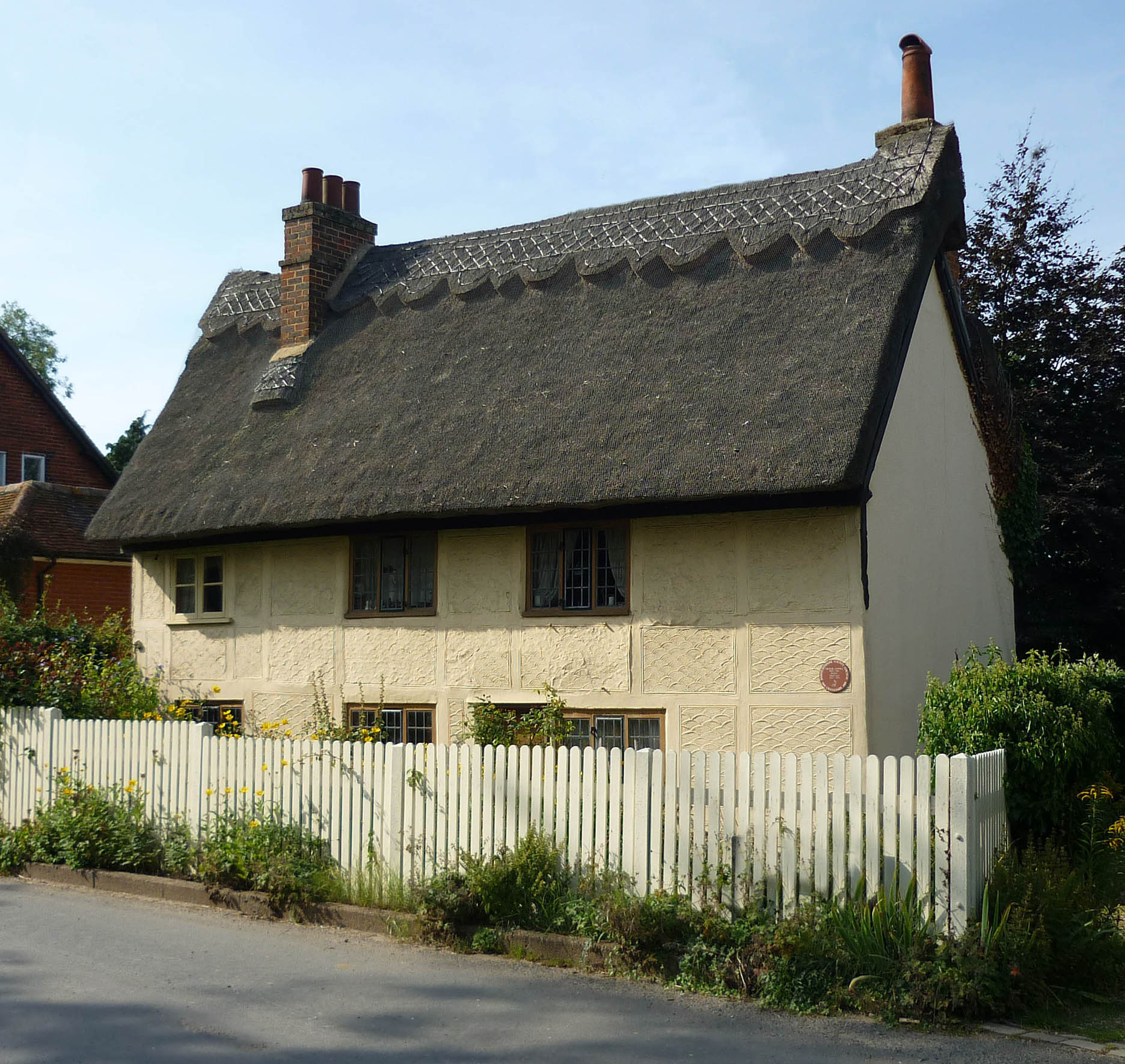 The grocer’s shop… Eric Blair, the author ‘George Orwell‘, spent some happy years dwelling in the tiny Hertfordshire village of Wallington, in the late 1930’s. Here he ran a grocery shop, from this thatched cottage. Moving here in 1936,  he wrote ’The Road to Wigan Pier’ and married his partner Eilen, in the local church. After serving in the Spanish civil war, the author and his wife returned here in 1937, when he wrote ‘Homage to Catalonia’… This hamlet was almost certainly the basis, for the fictional village of ‘Willingdon’; where the famous ‘Animal Farm’ was situated… photo: copyright & thanks to Julian Osley, Creative Commons.