Thatching in the counties of The South Eastern Lowlands. 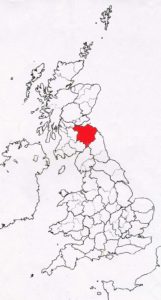 This section, covers the old counties of Peebles, Selkirk, Roxburgh, Berwick and the Lothians. For a long while the thatch here has followed the Northern tradition; but Highland methods were once practiced, even this far south.

Mr Douglas, in his Agricultural Report, noted that the annual coating of rushes, or spats; were still being applied; in the upland areas of Selkirkshire, in 1798. But the Northern tradition, had reached neighbouring Peebles four years later, barley straw was being sewn on, with tarred twine. The Reporter here, Mr Finlater; also saw an iron sting being used to stob, into an old turf based roof. He also noted heather thatch, with a turf ridge. This was also applied to the gables, similar to one of the following old pictures. By 1811 James Trotter reported that in West Lothian, ’Thatching is now better understood and executed than formally.’ 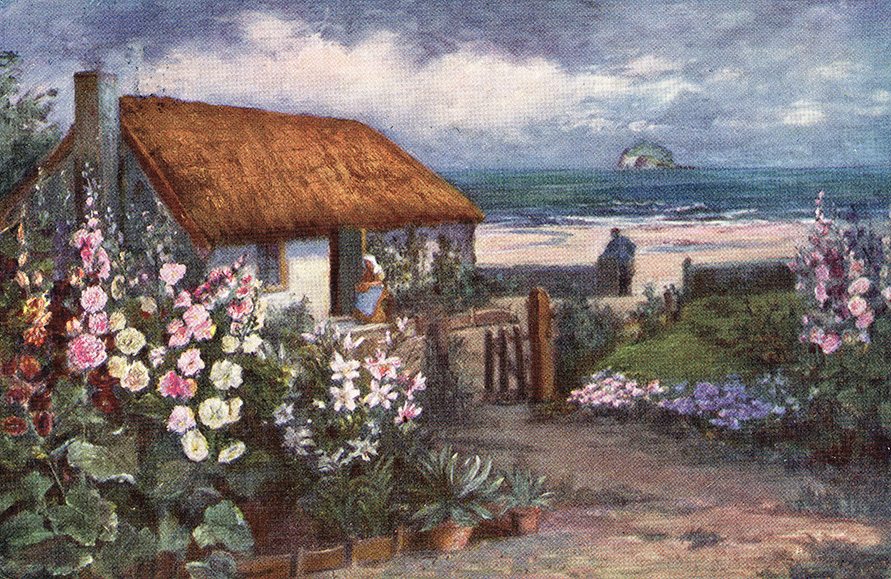 Seaside thatch… A fisherman’s cottage at North Berwick, in East Lothian. As depicted by the artist ’Jotter’ a century ago. Showing a Northern style boarded gable. On this attractive thatch, overlooking the Bass Rock.

Around the same time the gentlemen reporters were on their travels, another gent needed a refuge and rented a thatched house… To escape the summer dirt in Auld Reekie, a young Walter Scott moved to Lasswade; just south of bustling Edinburgh, in 1798. Here he wrote some of his best early work. One late summer visitor, in 1803 was William Wordsworth. ‘Lasswade Cottage’ still stands; much altered. But the author would recognise the thatched wing, of his old home. 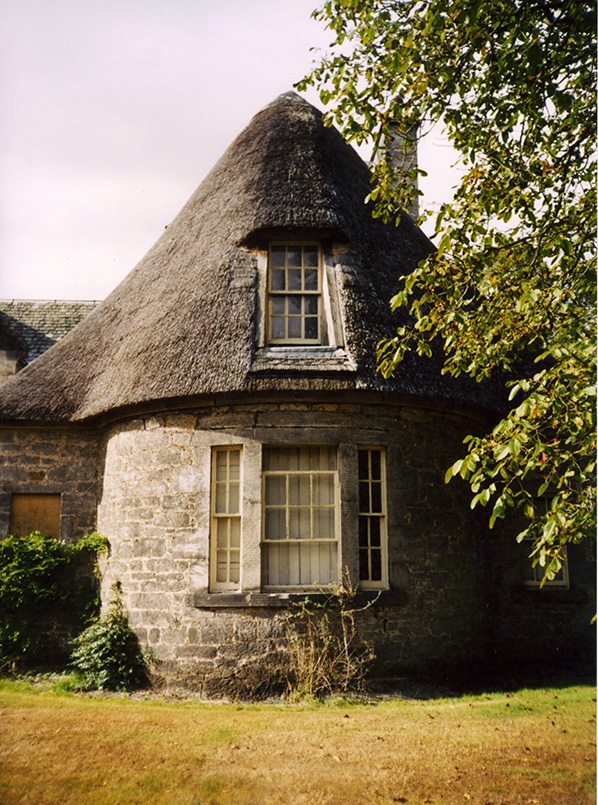 Author’s retreat… Walter Scott’s refuge; from the sooty air of Edinburgh. ‘Lasswade Cottage’, being in fact a rather large house. Newly built, in the then fashionable ‘cottage orne’ style. Above, today’s water reed thatch. Below, the roof around 1910; thatched in long straw. 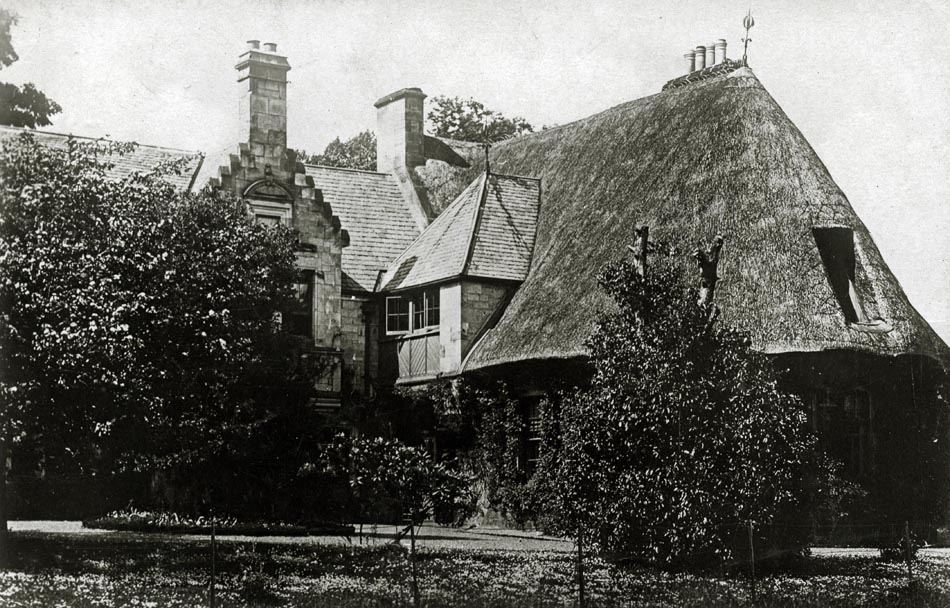 Edinburgh Reeds… The above roof in Walter Scott’s time may well have been coated in water reed, if a local source at Duddingston Loch was utilised… The opposite advert appeared in the Caledonian Mercury, in early January 1763. Apart from the material, a suitable thatcher was also noted, living at nearby Loanhead. The Loch now lies within Edinburgh’s city limits, still having extensive reed beds. It is interesting to speculate how long these had been harvested, before Alexander Wood placed his advertisement… 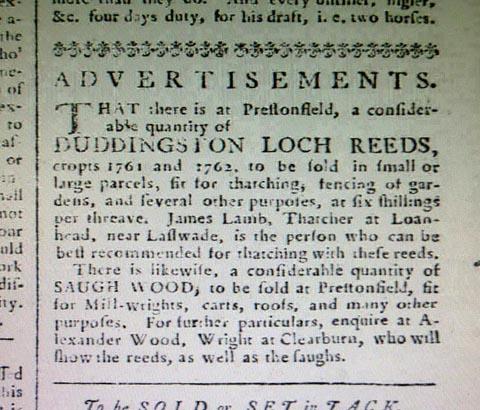 Another family made a similar move from the city, in 1867. When the Stevensons took ‘Swanston Cottage’; on the southern edge of the city. Here their son Robert Louis, spent many happy summers, exploring the nearby seventeenth century, thatched hamlet of Swanston. He wrote with affection of this place, throughout his life. The straw and turf thatch of his day, has been replaced, by Tay water reeds and mortar ridges., but the single storey cottages, are much as he would have known them. 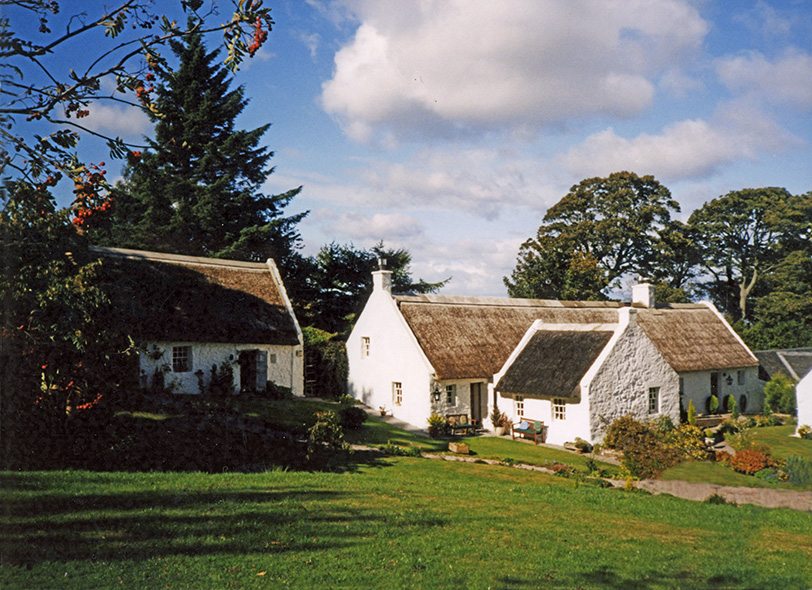 Apart from the roofs with a literary association; most thatch today, is found close to the border. In Roxburghshire; Denholm and the twin villages of Kirk Yentholm and Town Yetholm, have some examples. The rest is very widely scattered, all making use of the Tay water reed beds…

Two images, just outside Auld Reekie in around 1900. 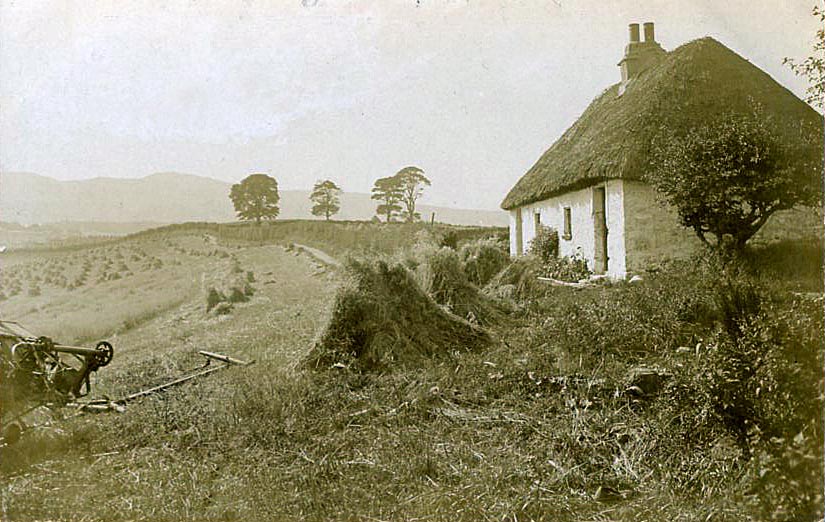 The rural image above shows ‘The Cottage’ at Braidburn, just south of the Edinburgh suburb of Morningside, at harvest time…

The right photo is of At Nine Mile Burn, just outside the city. The smithy here shows both ridge and gables or ‘Skews’ of turf. As described in the Agricultural Report of 1802, for Peebles. 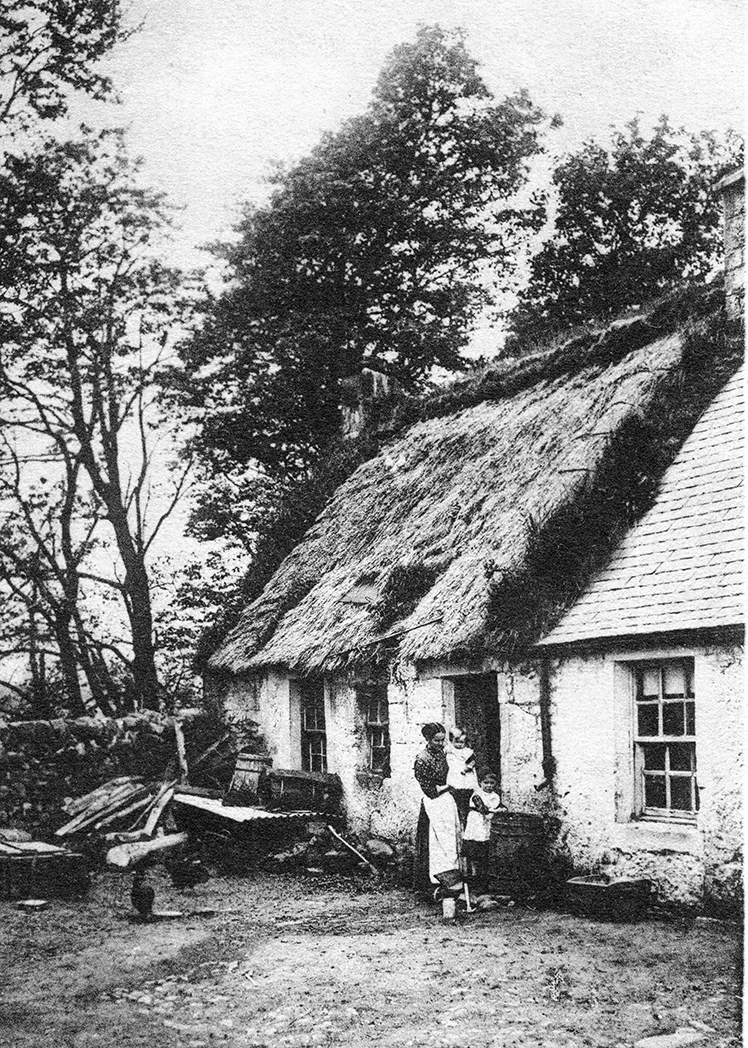 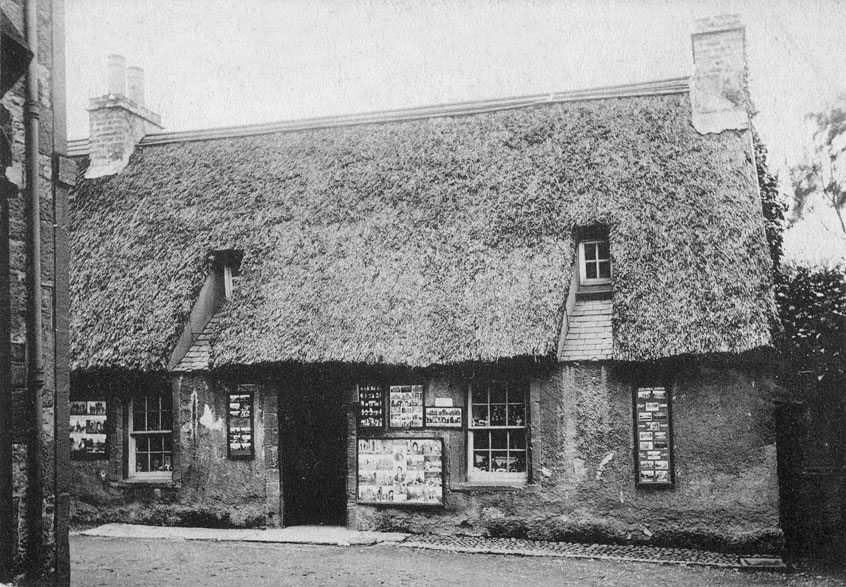 Timber ridged… This old image, shows a long gone roof, at Melrose in Roxburghshire; topped with a timber ridge and possibly coated with Tay water reeds. 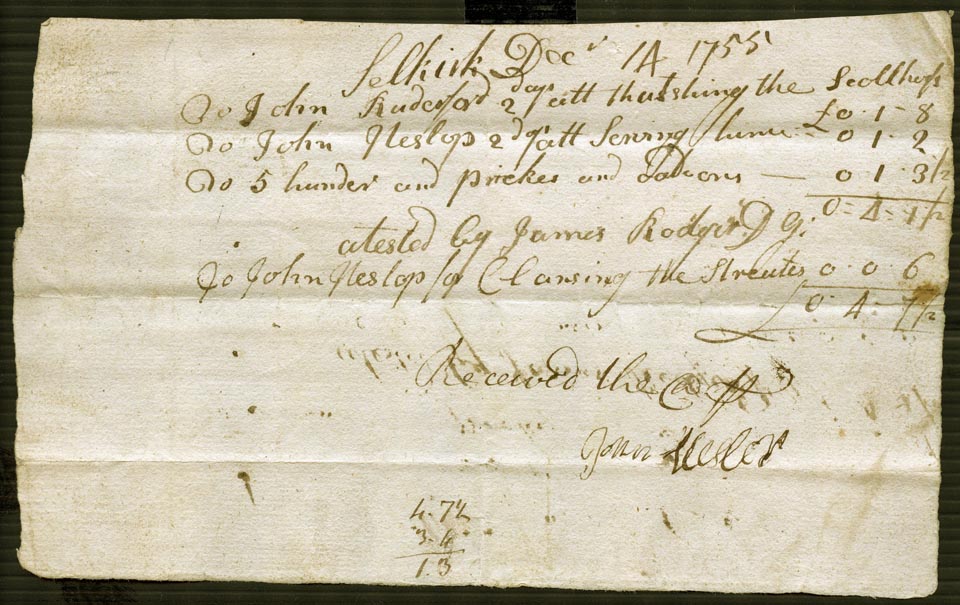 ‘The Scoll huss’… The above receipt was issued by the Burgh of Selkirk, in December 1755. It mainly concerns thatching works at the town’s school, still extant as the High School. From the information it contains, it seems one ‘John Rudeford’ (Rutherford) was tasked to work for two days, ‘Thatching the Scoll hoss’; for which he received tenpence a day. His helper ‘John Heslop’ was paid sevenpence. This latter John also was employed ‘Clasning the Strutes’ for sixpence… And he receipted this note, probably receiving the thatcher’s portion on his behalf. The third line shows the materials used, ‘pricks’= thatching spars and ‘Lahors’= ledgers/liggers; are easily identified; what ‘5 hunder’ represents is unclear; probably the thatch itself. The Burgh records show John Rutherford first appearing as a thatcher in 1748; the school recorded as having a thatched roof, at least four decades before this. John previously worked on the school in 1751 and on the ‘Comon Hous’ two years later. More work on the school is recorded in March 1762 when the ‘neck of the coul (school) chimnie’ needed attention… He is always shown working with an assistant, which was usual at this period. Before John’s time, in 1742, a James Ingles was paid for ‘casting divots’ of turf, in relation to thatching work; showing the likely ridging material and base for any new coatwork hereabouts. A Thomas Inglis appears with John, in his last Burgh record in 1772; Thomas very probably being a relation, of John Rutherford’s wife Margaret.Later Burgh records show that printed notices were circulated, in 1876; stating that all thatch in the town had to be removed, by order of the Police Commissioners… 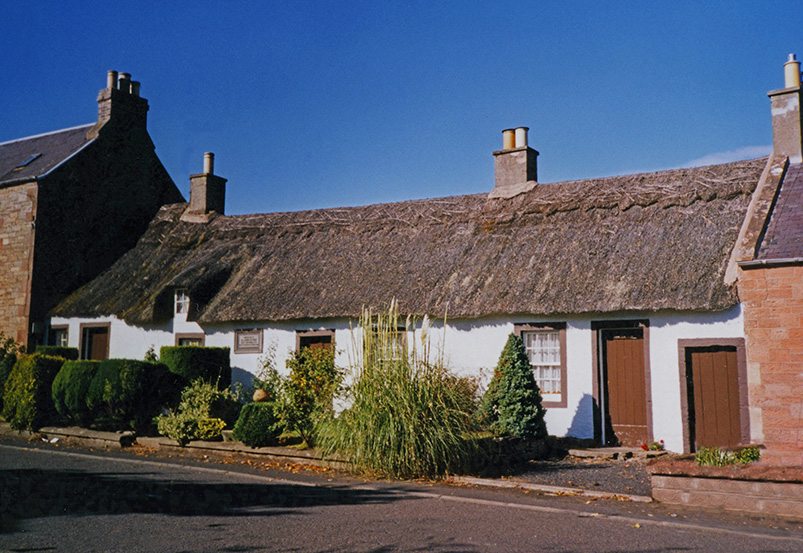 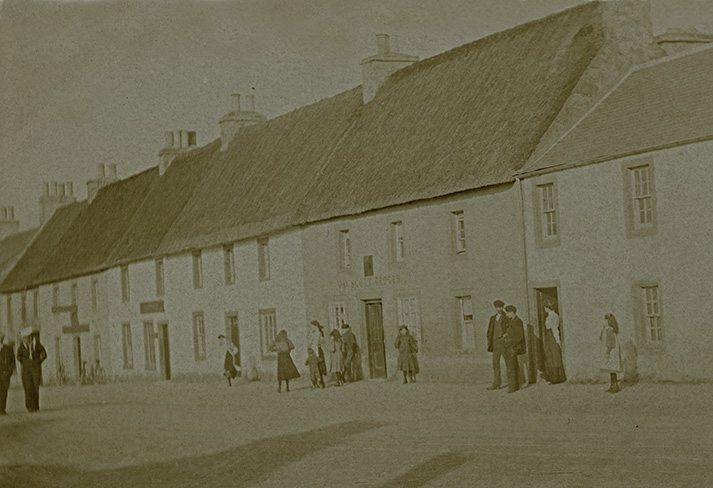 Denholm… It’s only thatch today, is the birthplace of Dr John Leyden in 1775. A shepherd’s son, who lived a short and interesting life. A friend of Walter Scott; a doctor of medicine and professor of languages, in India. Who died on an expedition to Java, in 1811. Old images of this cottage, show a Tay water reed roof, topped with a turf ridge. The right image shows, a row of thatched shops. In the good doctor’s home village, over a century ago. 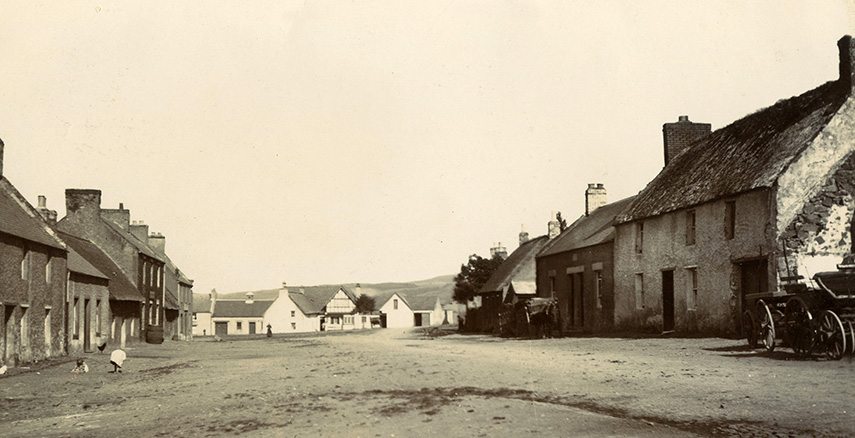 An Edwardian market place… at Kirk Yentholm. Still with a mixture, of tile and thatch dwellings. The newly thatched ones have a coat of Tay water reeds. But a century before this, in 1817; one Bailie Smith noted, the roofs were: ’straw covered’. With: ’chimneys bound with rushes and hay ropes’. These being the thatched lums, seen in many an old image. He noted the church also being roofed with thatch. 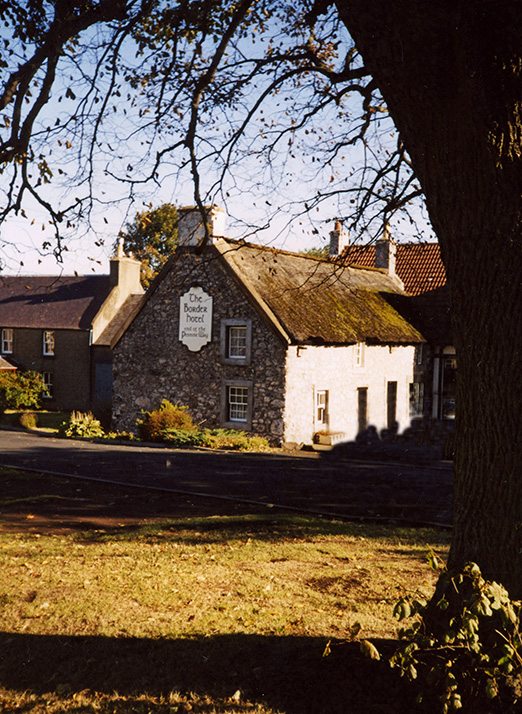 Yentholms… Kirk Yentholm still has some thatch. Including one of Scotland’s few remaining thatched pubs. The right photo shows a roof, in the sister village of Town Yentholm. With a Tay water reed coat, topped with turf. Others here are topped with tiles. 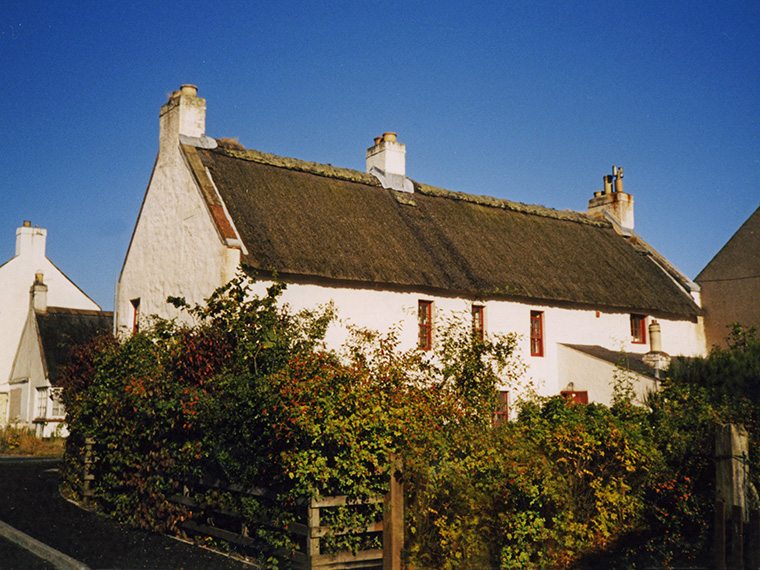 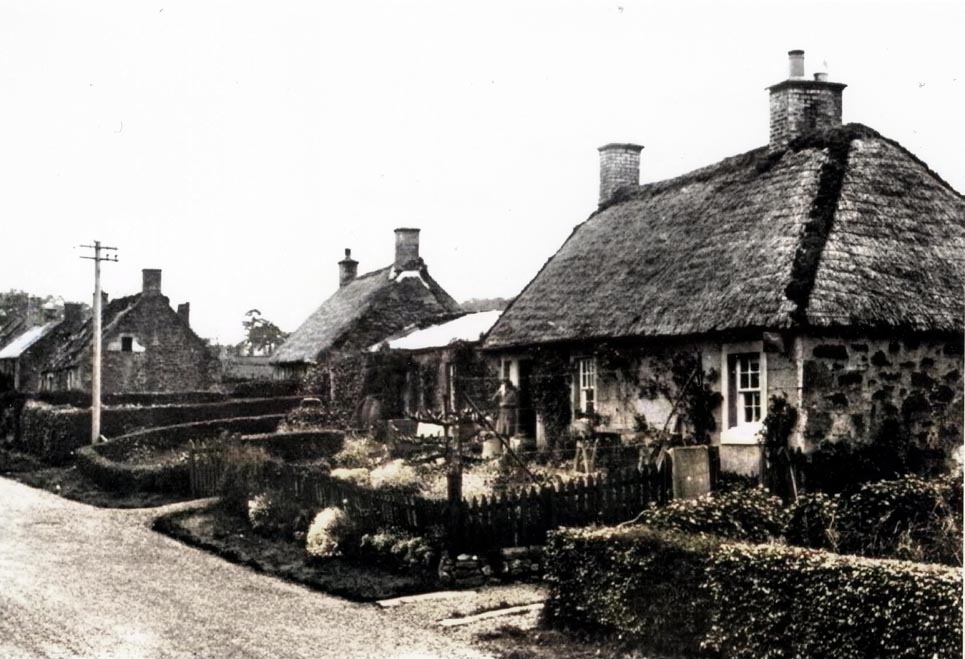 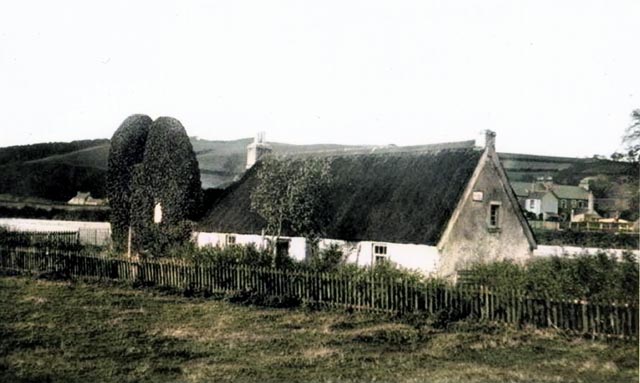 Berwickshire Thatch, around 1910… Above some seemingly stob thatched roofs with extra outside fixings at Polwarth. Both the main ridge and hip ends are protected by turf. In the mid 1800’s it was noted that a third of this tiny parish was covered in heath; no doubt a resource once used in the craft hereabouts. Opposite is a standard thatch, at Earlston; topped with a mortar ridge. 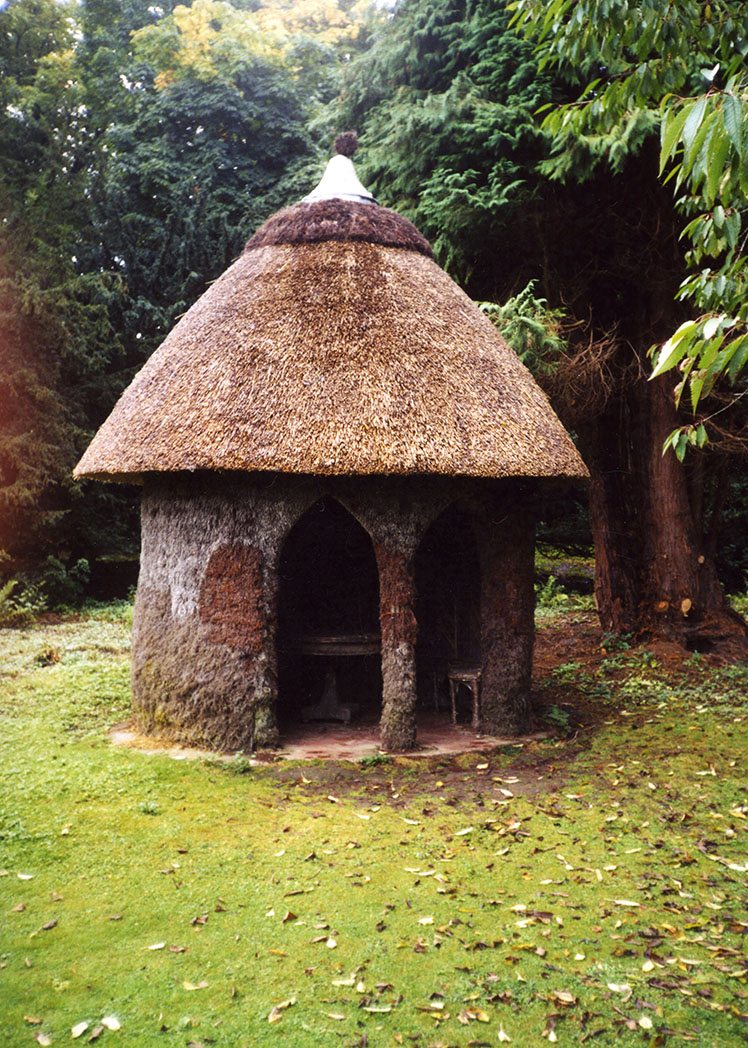 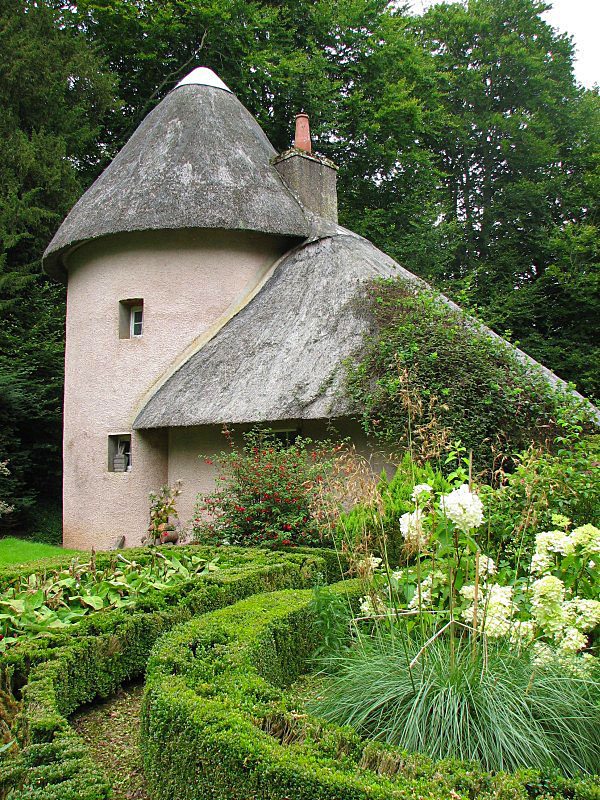 Garden Thatch, in Peebles-shire… The left summerhouse lies in the grounds of Traquair House, which is claimed to be the oldest continually inhabited house in Scotland. The summerhouse itself is quite old, dating from the 1830’s. With walls of heather; a material which once covered the roof. This is now coated in water reeds, with a jolly heather topping. Photo; kind permission of Traqiuar House. The right hand cottage is situated near Mellerstain House, in its large park. It seems to date from the early twentieth century, being in the ‘Arts and Crafts’ style… Photo; copyright & thanks , Callum Black, (licensed under Creative Commons.)

And finally, some more Arts & Crafts… 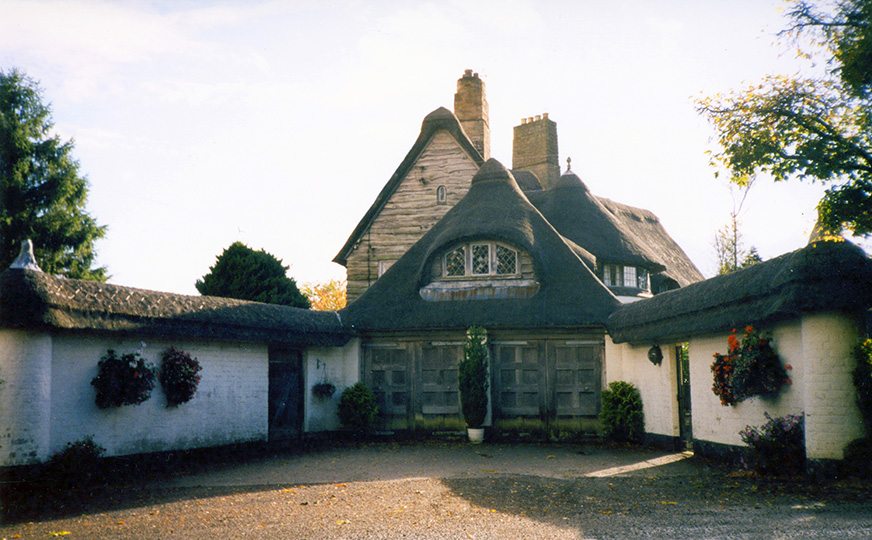 Bolton Muir, in East Lothian. It’s rare to find such architecture in this area…. This splendid building was designed by D.P. Hepworth, for a Colonel Thompson, in 1929. This late example, of the ‘Arts & Crafts’ genre, gave the colonel, the modern benefits of a double garage. The old image below shows the original thatch, newly completed. No doubt with Tay water reeds…

And a little mystery…

These two images, from around 1900, show a very detailed scene, of a location that is a mystery…

However the other images that were taken at the same time, and the type of thatching shown here, point to a site in the south western part of this area.

The thatch is very similar to the old images shown above, a mixture of straw, probably stobbed roofs and newer Tay water reed thatches. All topped with a ridge of turf.

The blown up image opposite, is a good illustration of some timber chimney lums, on two straw stobbed roofs; with more modern masonry examples in the background… 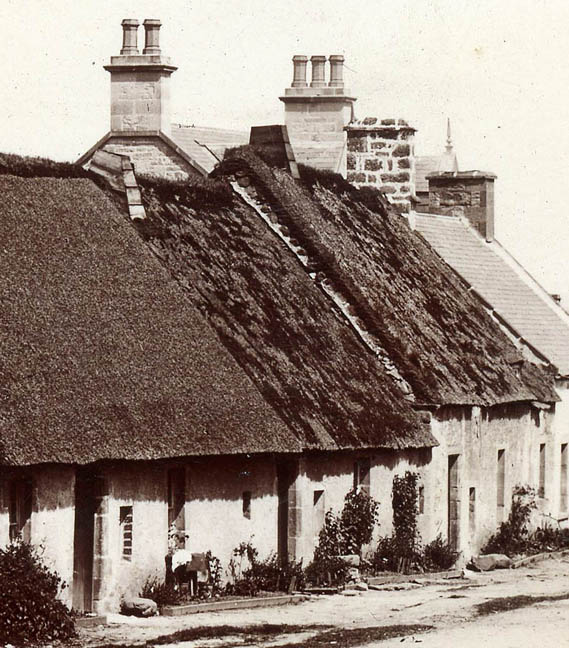 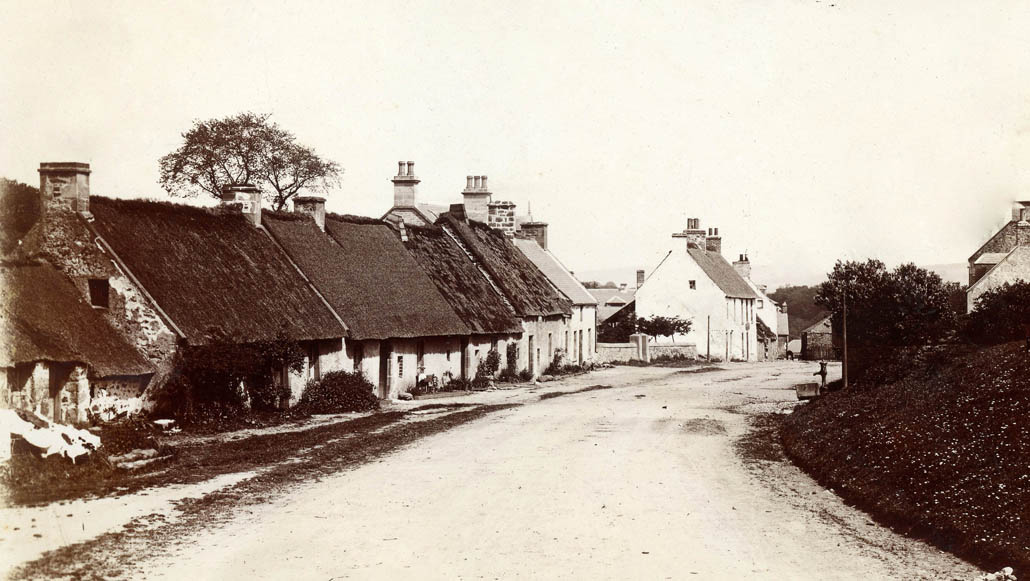