During the nineteenth century, the poor housing conditions of the working classes, came to the attention of many commentators; from Marx and Engles, to the Salvationist General Booth. They were mostly concerned with life in the burgeoning cities, but some concerned themselves with more rural properties. In their many tracts they often singled out thatched cottages, as examples of poor housing, and for a century or so they became synonymous, with backward health and moral conditions. As the nineteenth century turned into the twentieth, many thatched properties were singled out for demolition, whether in good condition or no; as a means of improving the housing of the poor… 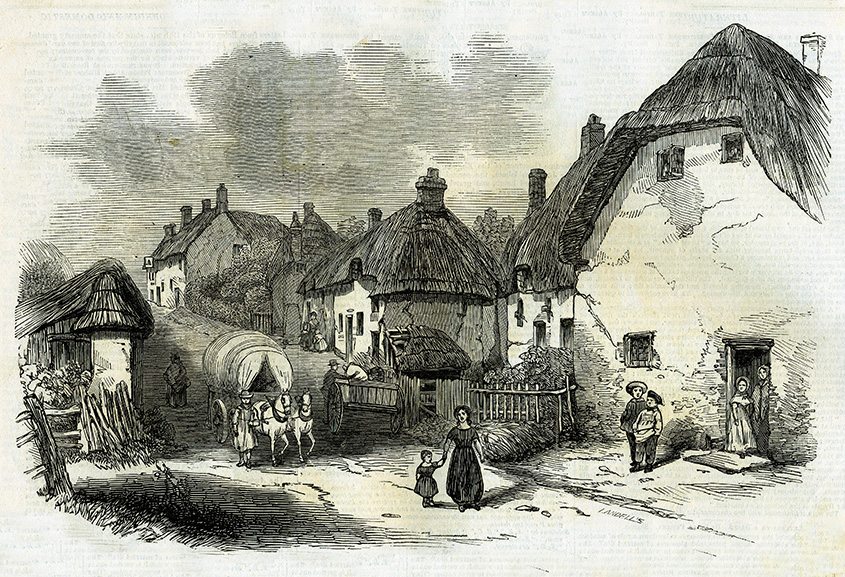 Cause for concern… An image from the Illustrated London News, from September 1846. Showing the village of Winterborne Whitechurch in Dorset. On the surface an attractive scene… But the accompanying article, describes the poor housing enjoyed by the inhabitants, of this and neighbouring villages. Homes were described as ‘frail and miserable’… Today, the above view is a busy trunk road. But the right hand cottage, still serves as an improved and comfortable thatched home.


As various reforms of local government gave councils wider powers, they began to turn their attention to what they saw, as the ‘nuisances’ of poorly thatched ‘insanitary’ housing. An example of the zeal, with which some councils took on these responsibilities, comes from Irving in Ayrshire. This council took action, in the early years of the last century. And soon got things moving; if somewhat dramatically, as the council minutes show…

In January 1902, the Bailie, Mr Kirkland, was concerned about the condition of the thatched houses in the burgh. The Sanitary Inspector admitted to a few being: ‘not in a state for human habitation’. The next month’s meeting, decided to use their powers under ‘Section 195 of the Burgh Police (Scotland) Act 1892’; to enforce ‘improvements’… A few months later, a notice was issued to thatch owners in the burgh; all the thatch had to go; by Whitsunday 1903. There was no appeal, to this decision.

But the council’s action, seemed to have had little effect, as a further enforcement notice had to be issued, in late August 1903. Owners now had fourteen days, to strip their roofs; or ‘legal proceedings will be adopted’… By the end of the year, the council’s problems with thatch were over. The records for 1904, make no reference to this particular ‘nuisance‘… 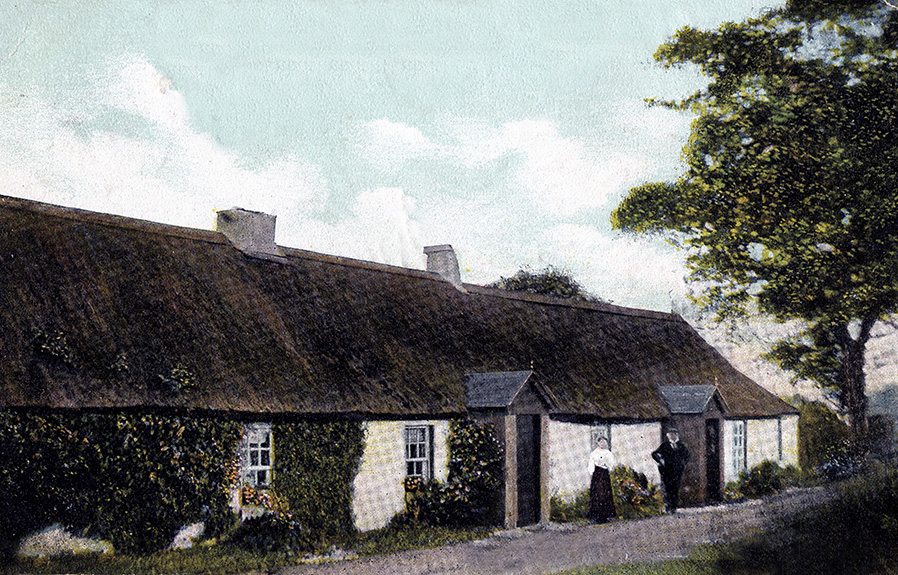 Escaping Bailie Kirkland… This contemporary thatch, at Fullerton, lay just over the River Irvine and it seems outside the town’s jurisdiction. The cottages here seem in a good state. And were no doubt, a similar type of thatched building, to that which annoyed the neighbouring council so much.

Another law, used to remove nuisance buildings, was the Housing of the Working Classes Act 1890. Under Section 38, a building did not even have to be in bad repair to be a nuisance. If four local inhabitants made a case to the authorities, a building could be condemned; if it ‘conduces to make… other buildings… unfit for human habitation… Or other evils complained of.’

To us, these actions may seem rather draconian. But it has to be remembered that some thatched houses, contained more than a few long suffering tenants, well used to leaking roofs and damp homes. This said, it is interesting to note that the owners, at Irvine, were not given the option of rethatching their property. The thatch simply had to go…

Until the legal protection offered by listing, many thousands of thatched properties fell prey to the Sanitary Inspectors. A report was made, a magistrate could then issue an ‘ejectment order’, if the house was occupied. Even if the occupier was the owner, they still had to leave; this being a constant worry for the elderly. In one case, an old cottager of seventy three, stated to a magistrate, that his home was not unfit. As both he and his parents had lived there all their lives, he being one of ten children, with not a case of illness for sixty years. His mother finally dying at eighty nine and his father at ninety six… Whether this appeal was successful is not recorded. But often the house was ‘condemned‘; as ‘unfit for human habitation‘. Demolition inevitably followed… . 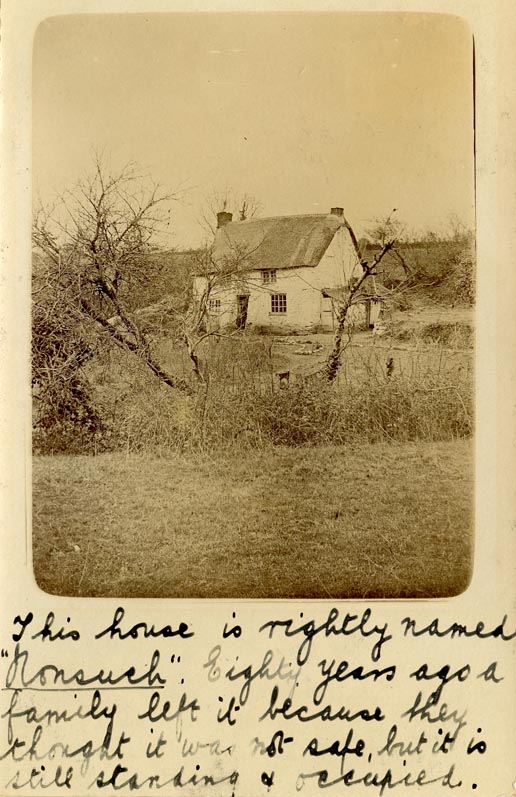 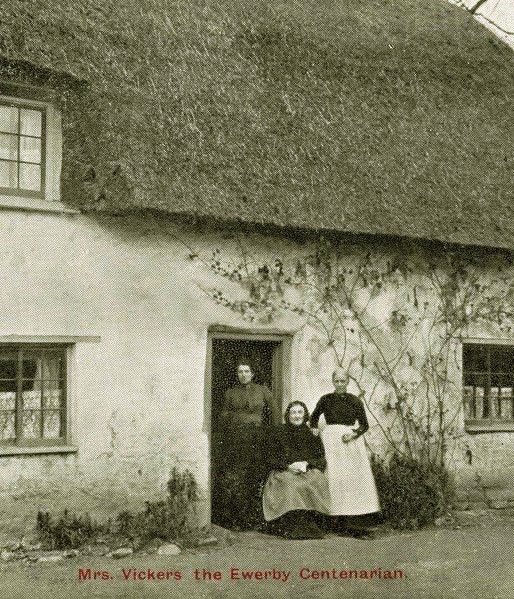 Old Hands… The postcard shown on the left, dated 17th May 1904, says it all… ‘Mrs Vickers the Ewerby Centenarian’ is shown above. The date of this image means this venerable Lincolnshire lady, was born in the first years of the nineteenth century. A life under thatch seemingly causing her no harm… 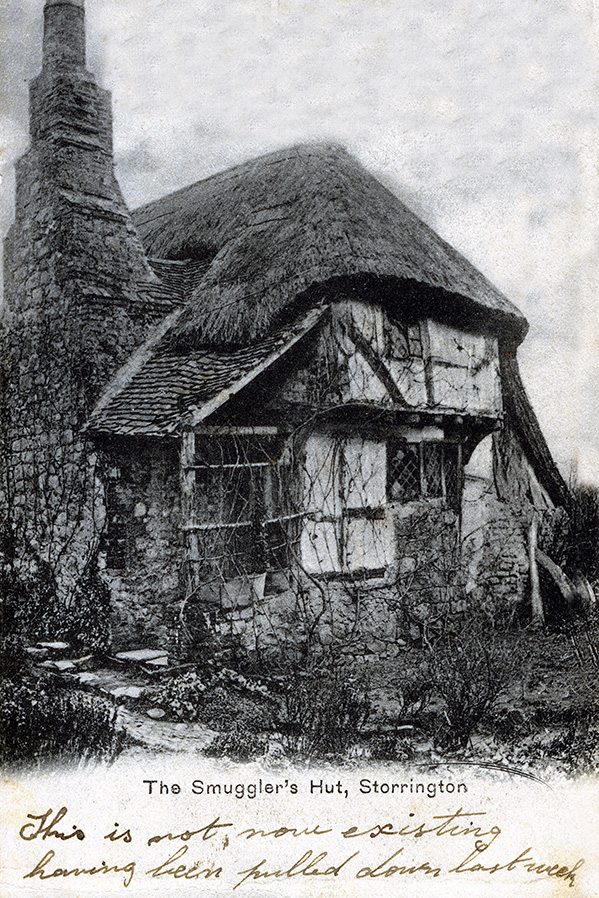 No appeal… This old postcard, from Storrington in Sussex, was posted in July 1904. The bottom reads: ‘This is not now existing having been pulled down last week.’ Hopefully it would be more difficult to demolish, a small, possibly medieval thatched house today. But until the middle of the last century, there was no protection.


A twist to the Irvine story, is that those Edwardian worthies, on the burgh council failed in the end. Recent renovation of the town’s historic Glasgow Vennel area; saw one building covered with the banned material. Paid for from public funds. This was the small Heckling Shed, burned down by the poet Robert Burns’ drunken aunt. A ruin since 1781… An event described in the page on the poet. Just Click Here.

A host of other towns had already banned the use of thatch, from the Middle Ages onwards. The fear of fire not public health, being their main concern. The risk was real. Ashbourne in Derbyshire burned in 1615. Blandford in Dorset was devastated in 1731. Many more acted before any conflagration, but this could take time. Ten years was allowed, to replace thatch with tile or slate, in St Helier in 1715. However two leather fire buckets had to be ready within twelve months. The town of Brechin, went for a ban in 1762, but nearly half a century passed until the last roof was stripped, in 1810. Showing how popular thatching was. 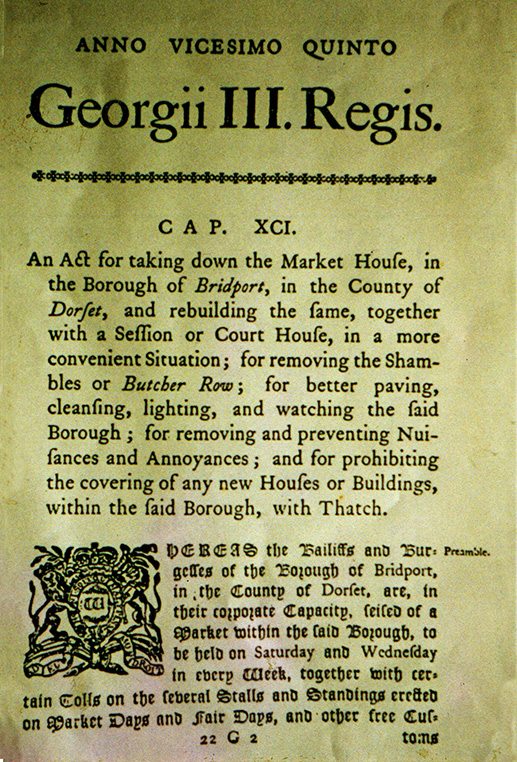 Force of the law… This Act, of 1785, concerned the town of Bridport in Dorset. Along with some good works, such as; ‘…preventing Nuifances and Annoyances’. The local worthies, also slipped in a final clause. ‘ … prohibiting the covering of any new Houses or Buildings, within the said Borough, with Thatch.’

But even when banned, for urban domestic thatching, the craft lingered on, in the guise of thatching ricks and stacks. Covering and protecting a host of differing items, but mostly the feed and fodder, required by the animals kept in towns and cities… As the final page in this history section shows.Click Here

Prevention was certainly better than a cure… Fire equipment for many parishes, originally consisted of a few leather buckets and long thatch hooks. For pulling off the burning material… The lower left image shows the ‘Thatch Scratcher’; kept in the parish church at Swalcliffe in Oxfordshire. The long wooden pole, this hook once topped is long gone. The chains were used to pull the hook, down over the thatch. Ropes would be liable to burn. These hooks and the odd fire engine, were often kept in the local church. As everyone knew the location and the building was rarely locked. Such as the engine on lower right, from Milborne Port in Somerset. Built in 1733; repaired in 1795 and now kept in the county museum. An early fire brigade was in operation, in the town of Carmarthen, in 1633; when the mayor, one Thomas Atkins, purchased “twelve buckets, with two hooks to pull the burning thatch off the roofs, and iron hats for the firemen.” 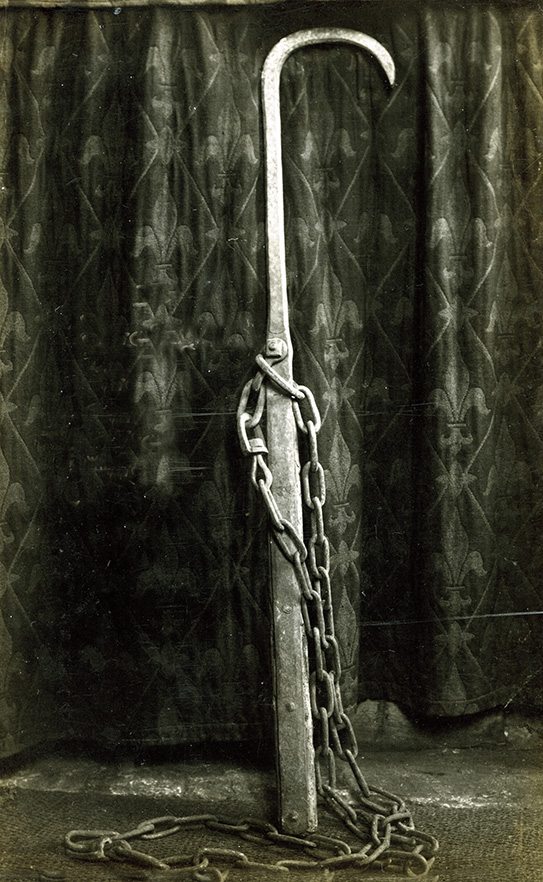 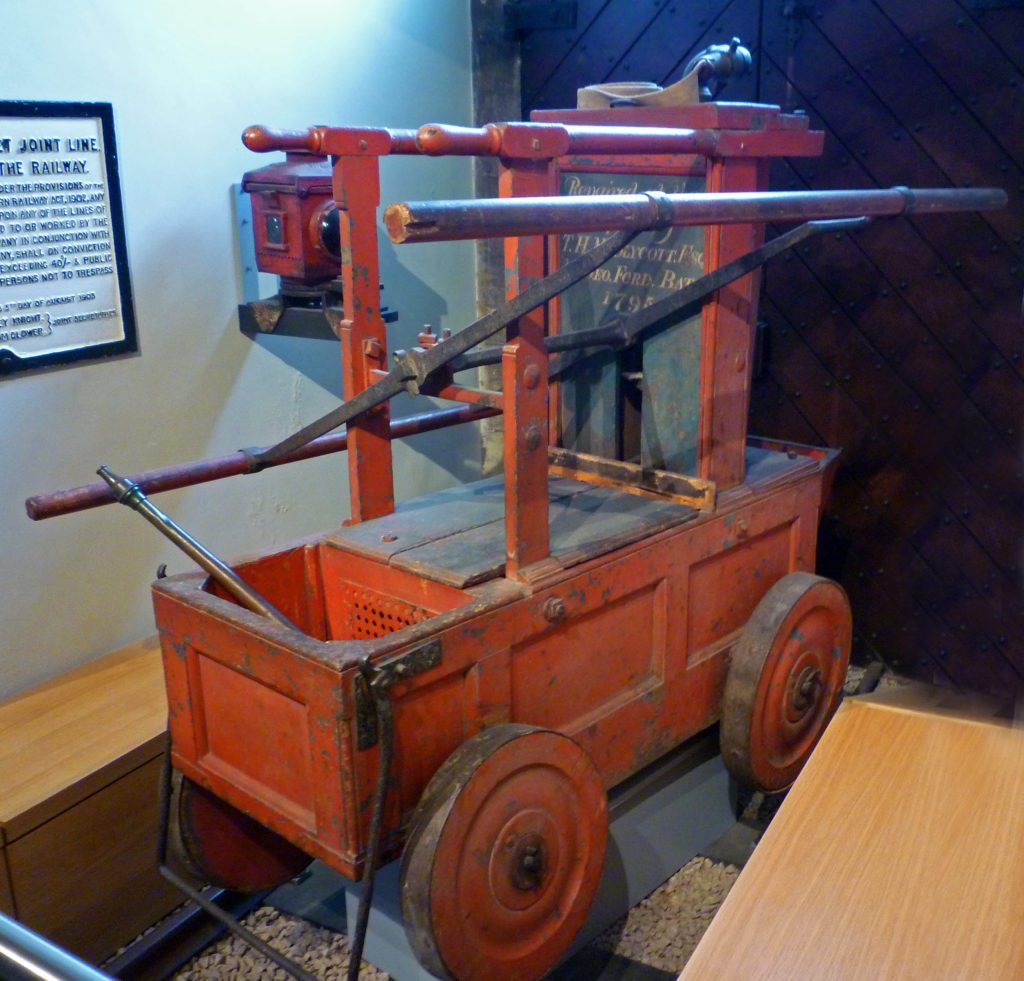 It would seem the old fire engine at Milborne Port had been retired, when fire broke out in 1905. In February of that year a chimney fire at the end of five cottages spread into the thatch. A local was sent off on his bike to neighbouring Sherborne, to raise their brigade; they eventually arrived an hour and a half after the first alarm… An earlier arrival would have been of little help, as the Milborne hydrant would not fit the Sherborne standpipe. 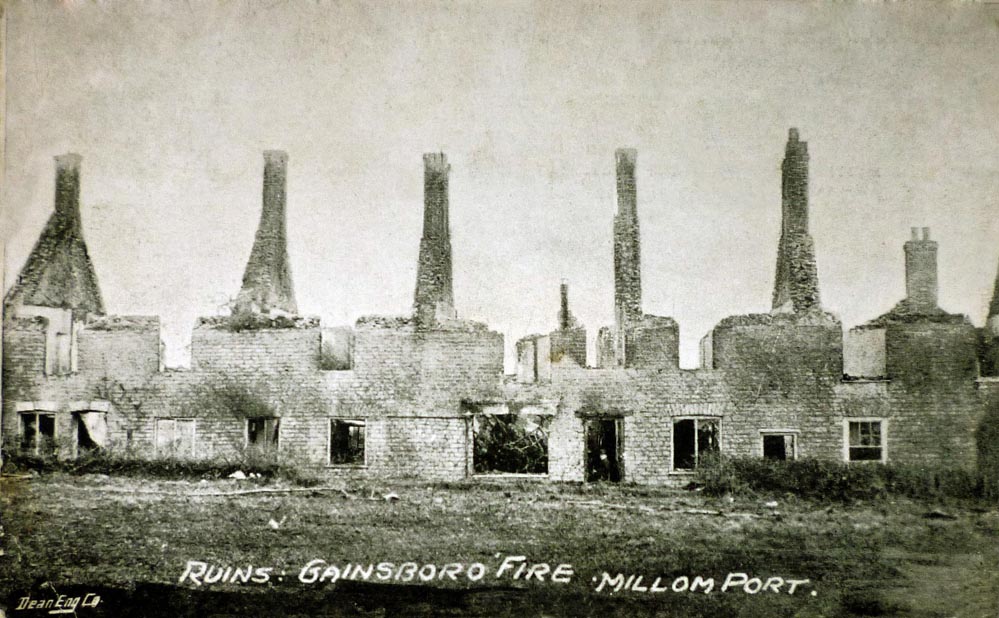 It’s an ill wind… It was a strong easterly that did for the cottages at Milborne Port. But local photographers were soon selling postcards of the scene…

Even if communities had their own fire engine, this was not so effective as it might have been… In the middle of Norfolk, the village of Shipdam boasted it’s own horse drawn engine. A call came one summer’s day; that the thatch on the King’s Head pub was alight. The head fireman then followed his normal procedure… Of bicycling to the incident, to ensure it was not a false alarm. Being assured that all was well, in this case by the burning roof, he cycled back to the fire station and rounded up the horse. The first thing to be rescued, was the stock from the beer cellar, the only casualty was an inebriated fireman…

A more organised response came in Somerset, from the Yeovil fire brigade in 1914. The volunteers were assembled and to speed things up, the horses were dispensed with. The pump instead was hitched up to a large motor car. The firemen piled in. The blazing row of three thatched cottages, was reached in record time, but the water supply was half a mile away; taking an age to find. Then not enough hands could be found, to work the pump. This was manual and needed all the help it could get. It would be another eight years, before the first motor driven fire engine would grace the Yeovil fire station.

Too early, Too late…Sixteen years before the arrival of the Yeovil motorised engine, fire struck in the town; making two families homeless; due to an unattended candle, in the rear of an adjacent shop. The inevitable onlookers braving a cold winter’s day. The remains of the cottages’ thatch lie on the wall… 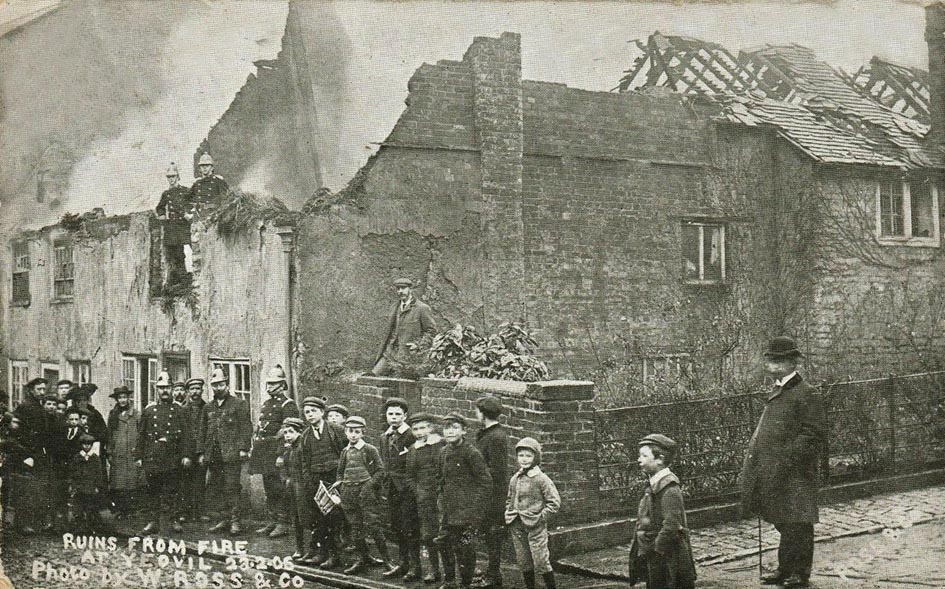 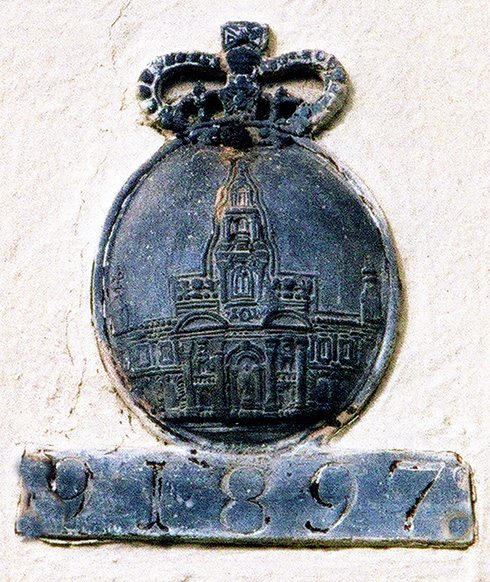 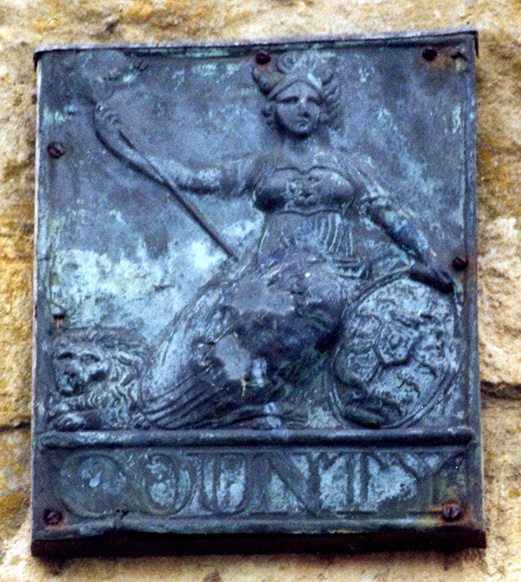 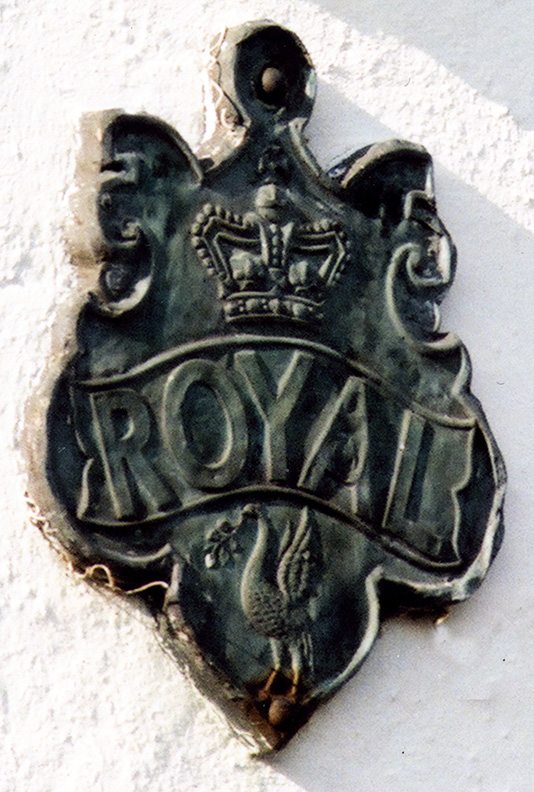 Fire plates… In the past, as now, the wise thatchowner remains well insured. Old insurance fireplates are still found on many thatched houses. Denoting which insurance company, would pay the final reckoning… These are from Gittisham, in Devon; Milborne Port in Somerset and Houghton in Huntingdonshire.


We can look back and smile at these fire brigade mishaps, of a century ago. But for those involved, the fires and visits from the Sanitary Inspectors, often meant the loss of a home. And for the thatcher, the loss of a roof…
What goes around… The lean years after the Second World War seemingly brought a change in attitude, for some councils in 1948…

** Many thanks to the folks at Irvine Council, for supplying the info. on the thatch removal story. They really are very friendly these days… 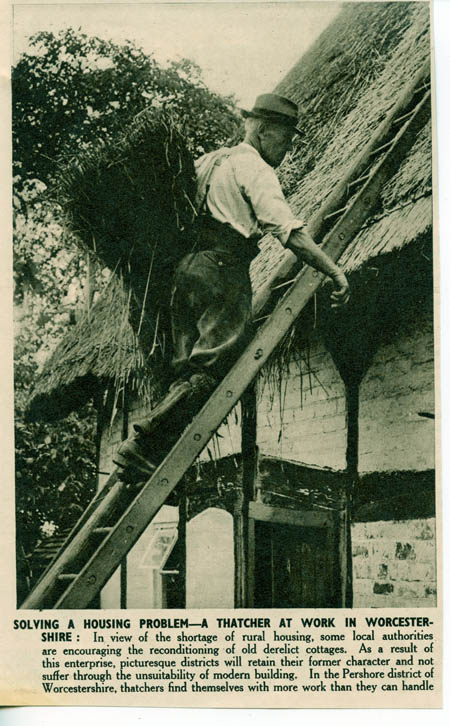