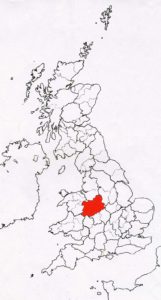 Thatch is now thinly and widely scattered throughout these two historic counties, which lie on the southern edge, of the Northern thatching tradition. Watling Street, the main boundary between thatching styles, skims through southern Staffordshire and cuts right through Shropshire. But areas hereabouts, on either side of the old Roman road, are generally similar.

Something of a local speciality, are the very wide eaves; often seen on thatch, in the south of both counties. Hinting at some influence from the Southern tradition. But rolled or boarded gables and a fairly angular roof shape, are found throughout. The use of long straw, once the main coating material, seems to have disappeared. However work in combed wheat reed, following an old style, is common; especially in Shropshire. 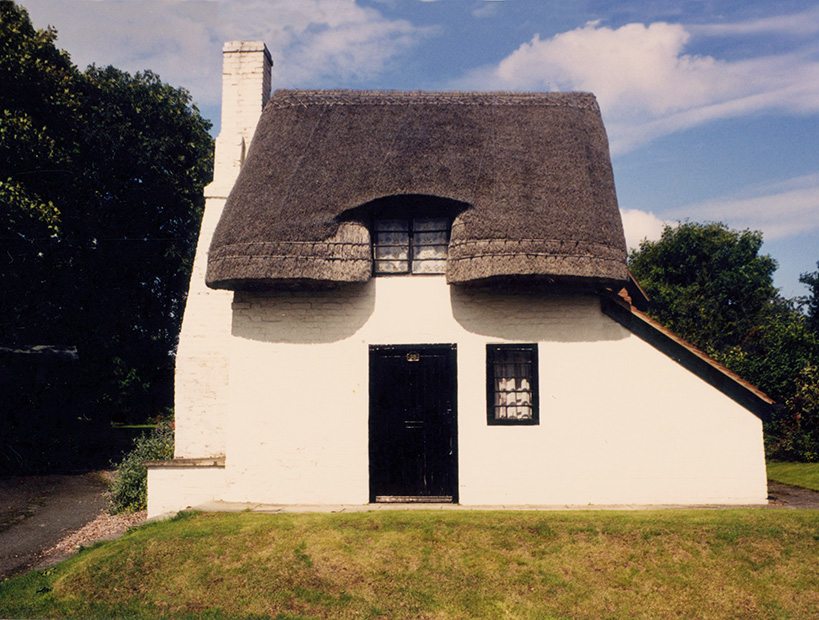 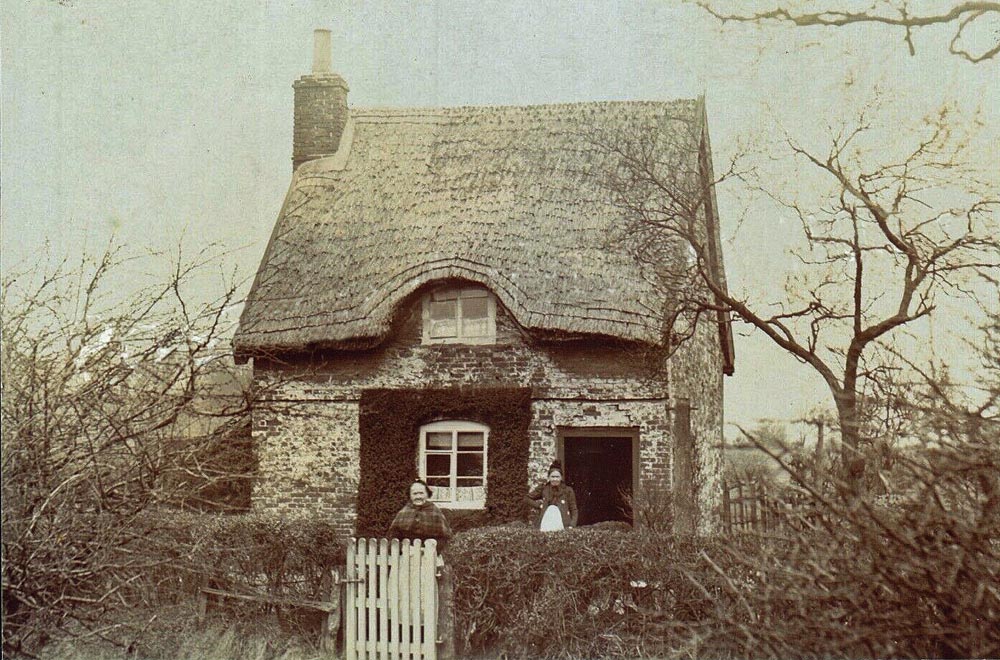 Edwardian Gem… Another single bay cottage, unlike the Church Ashton home, this has not survived. Once standing on Gorsty Hill Road, in the Staffordshire village of Tean. The thatch is rather worn in places, showing the lines of spar fixings clearly; with long straw decoration around the edges of the roof.

Shropshire has good groups of thatch, south east of Shrewsbury and around Ellesmere. By far the most thatch in Staffordshire, lies in the large village of Alrewas, north of Lichfield. Perhaps the best known thatched building, in this county, lies north west of the county town. Once owned by one of it’s more famous sons….

Izaak Walton’s Cottage at Shallowford, has had a chequered history, surviving near dereliction, two fires and five decades under tiles. The father of angling, would now probably recognise his old property. Except that combed wheat reed, replaces the traditional long straw thatch. It is now a charming museum, clebrating the author of; The Compleat Angler or the Contemplative Man’s Recreation. Published in 1653, only the Bible and Shakespeare, have had more editions. 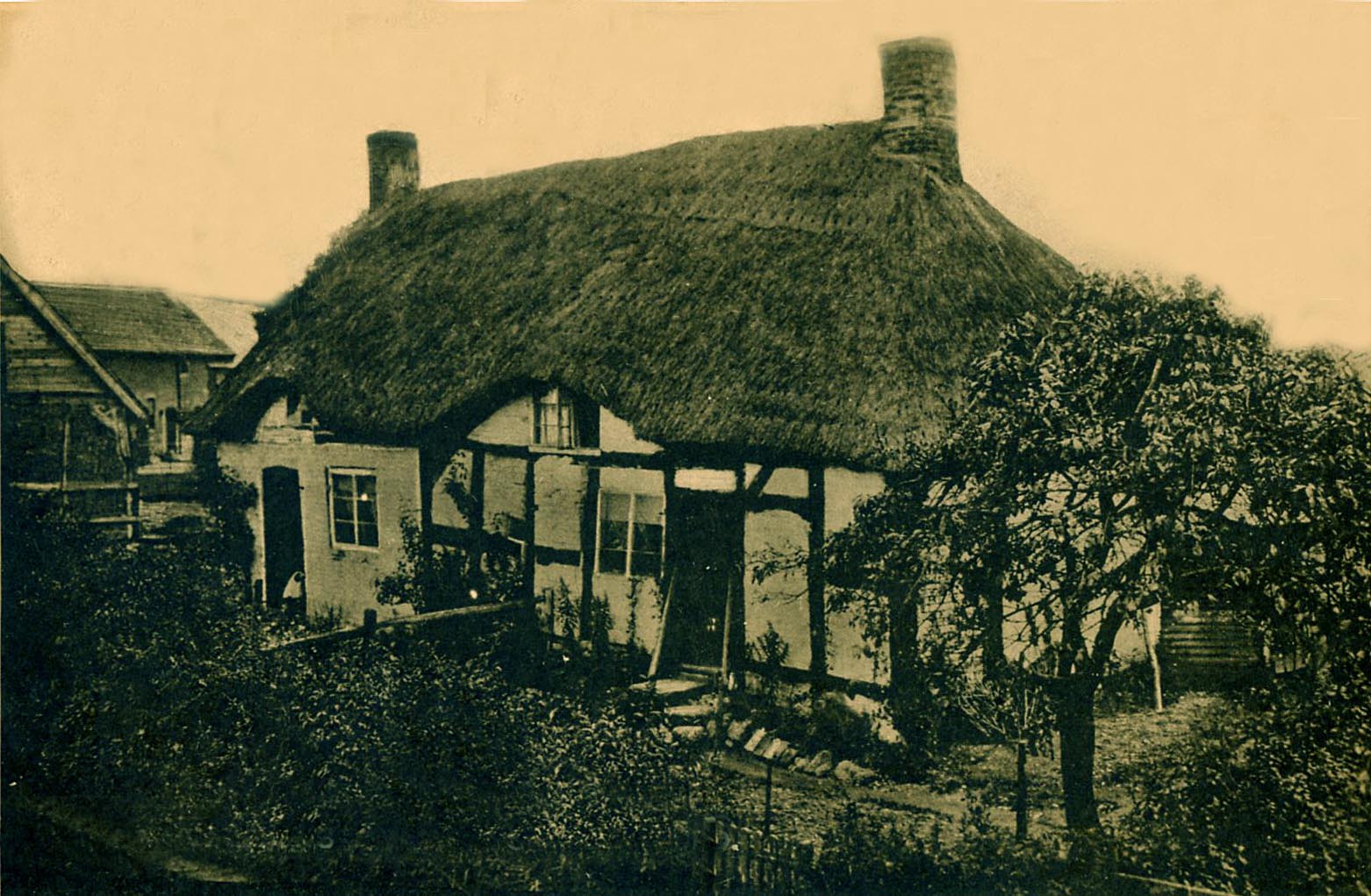 Izaak Walton’s Cottage… Part of a farm, Izaak bought as an investment. Leaving it to his home town. The rents, to provide for the poor. Later, sparking steam trains, passing close by, caused two major fires in the last century. But electric has replaced steam. And thatch the tiled roof, this building had for half a century. Photo; kind permission, Izaak Walton Museum. 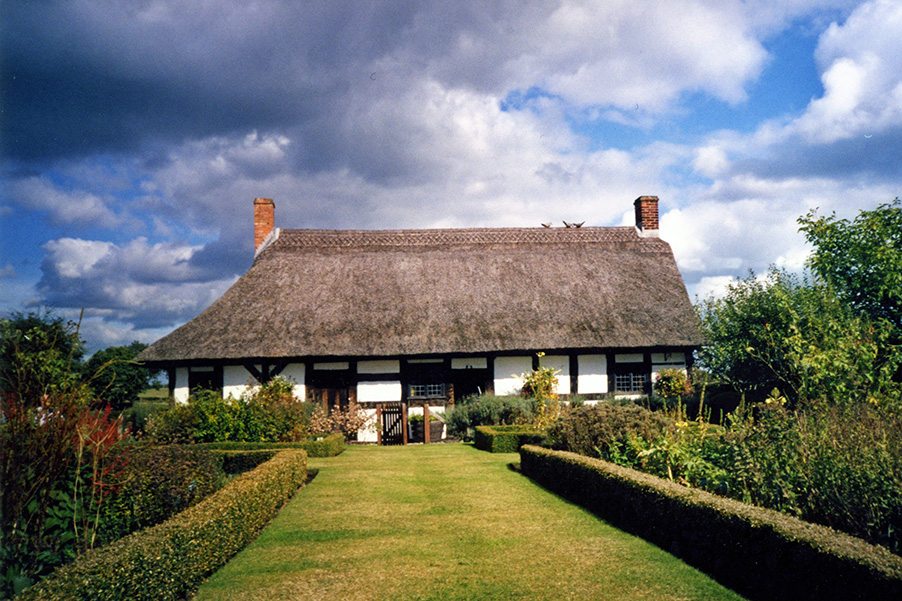 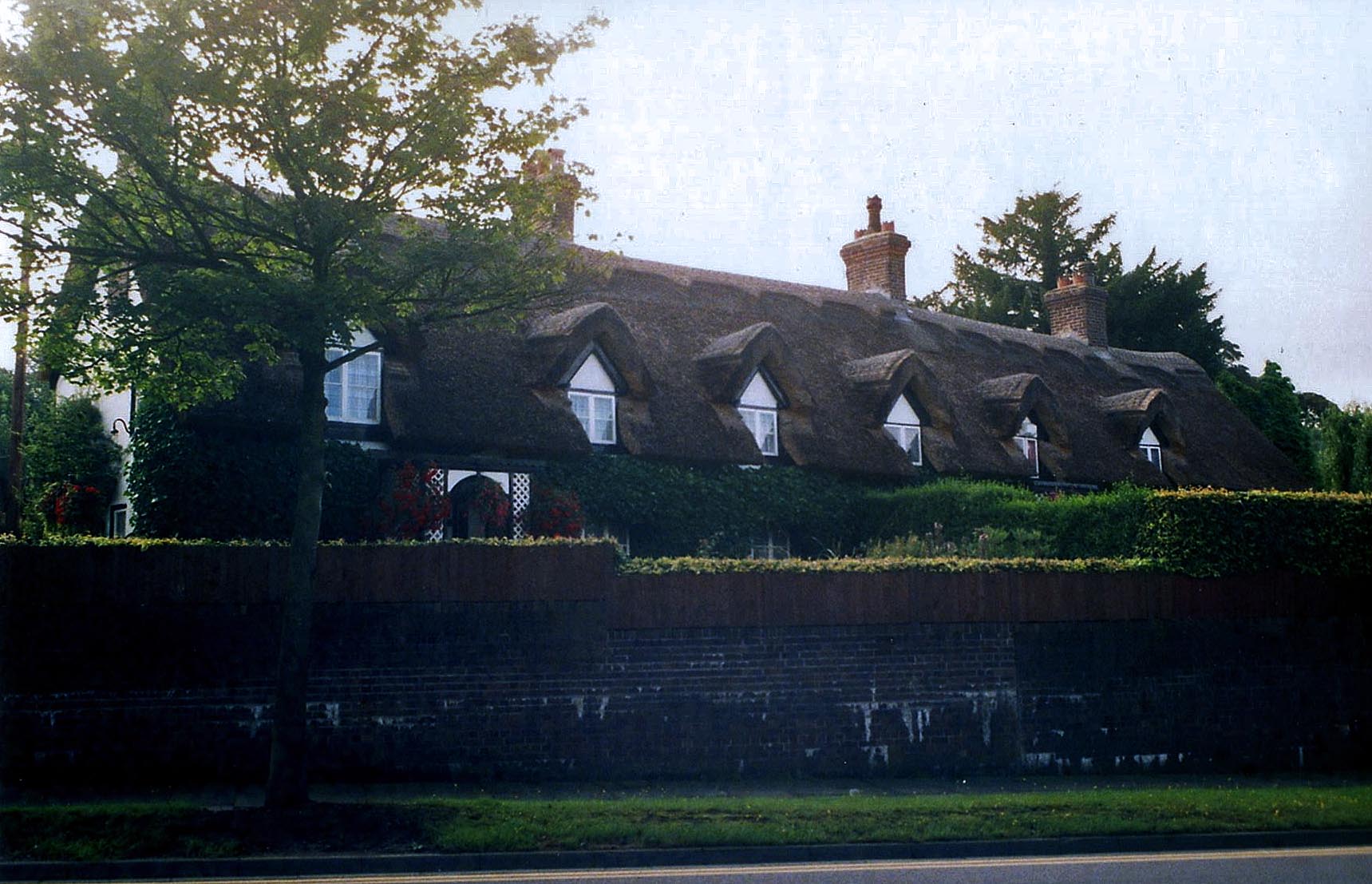 ‘Only thatch in Stoke’… The long building above, thatched in water reed, lies at Trentham, now part of Stoke on Trent and claims to be the last thatch, within the city limits… An earlier photo is shown on the right, dating to around 1905; dipicting the roof thatched in long straw, to a high standard.

When Trentham was a village, more thatch here was photographed by Helmut Petschler, in the 1860’s. Whose work is found on this page in the History section… 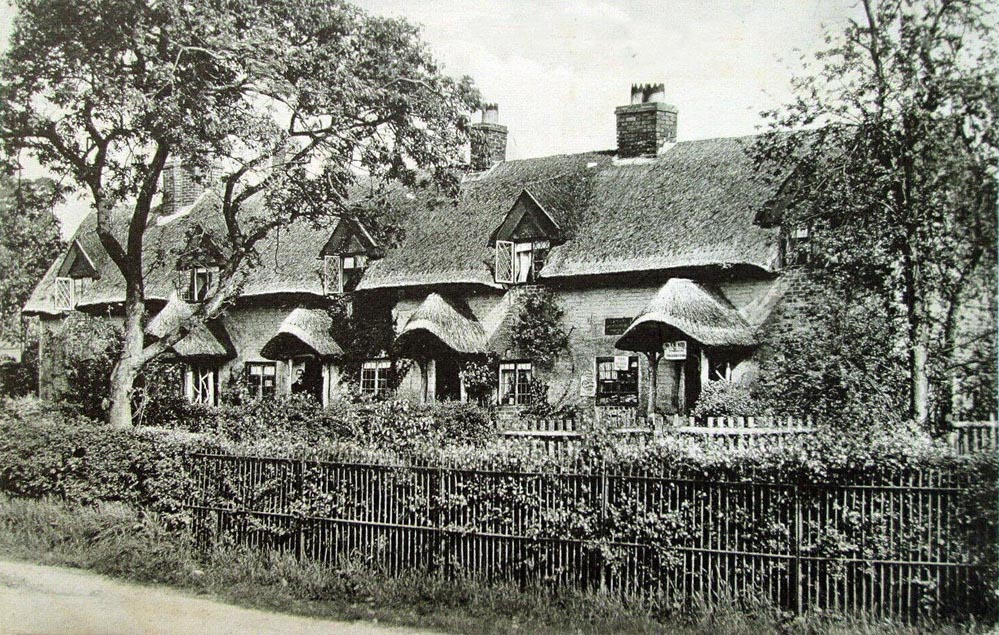 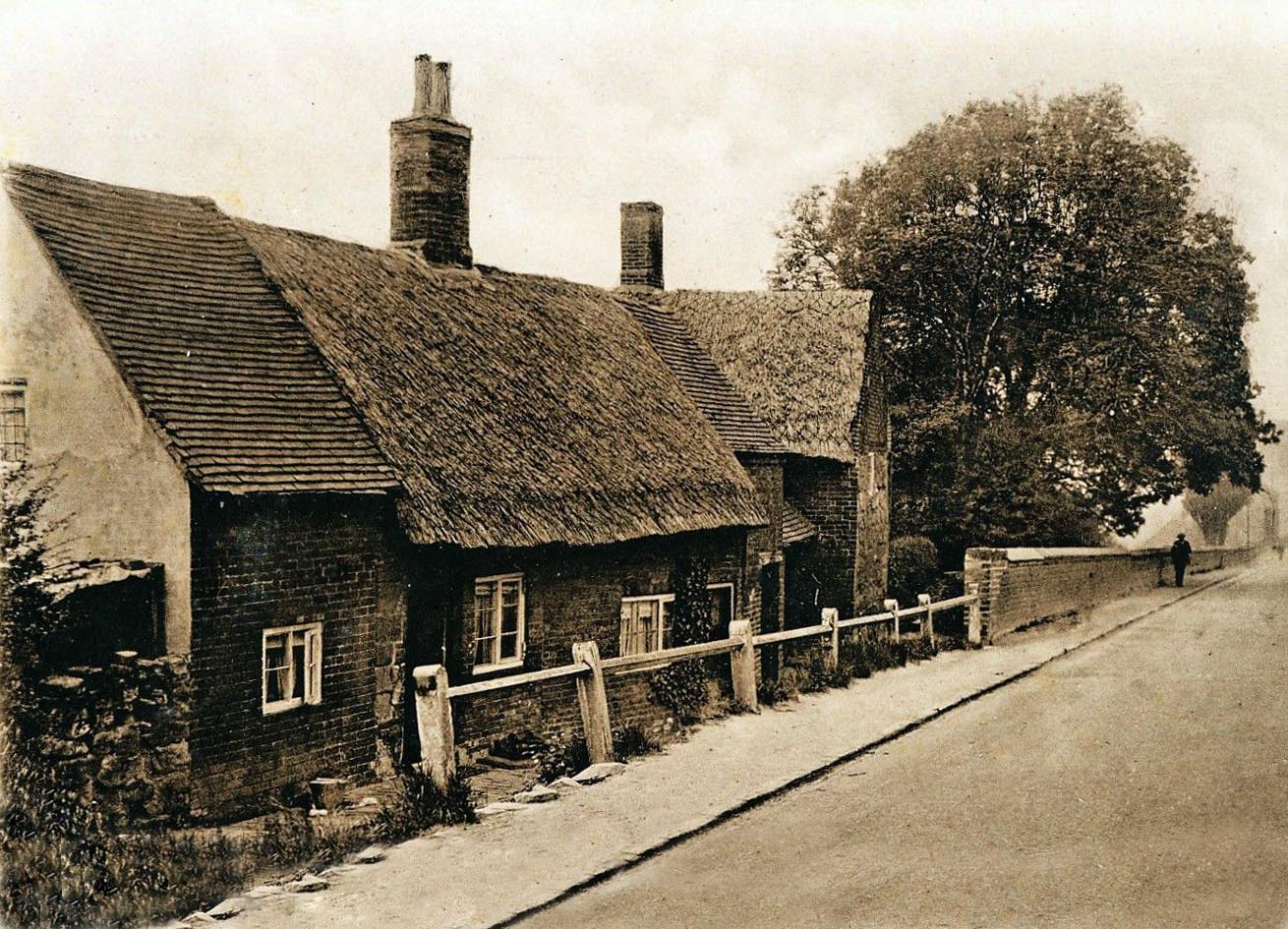 Stobbed thatch… At Wilnecote, on the old Roman road of Watling Street; near Tamworth. The coarse looking coatwork, is a sure sign that it was stobbed into place, being finished with thin cut ornamental ridge. In around 1905… 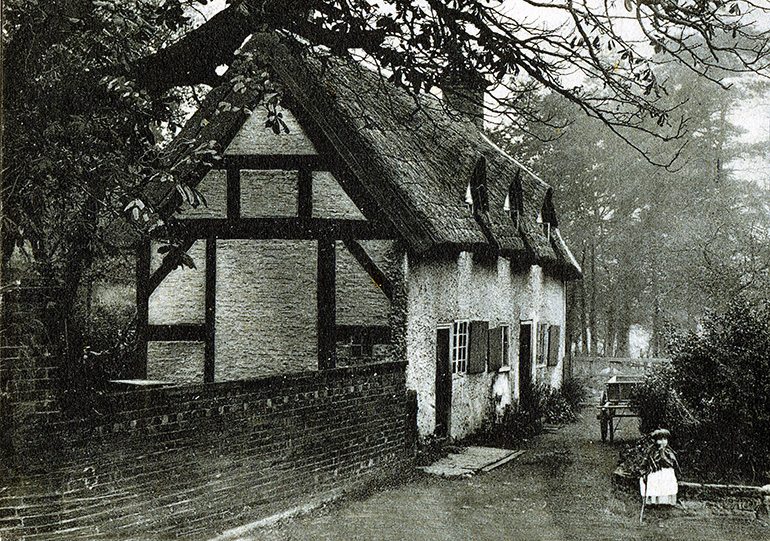 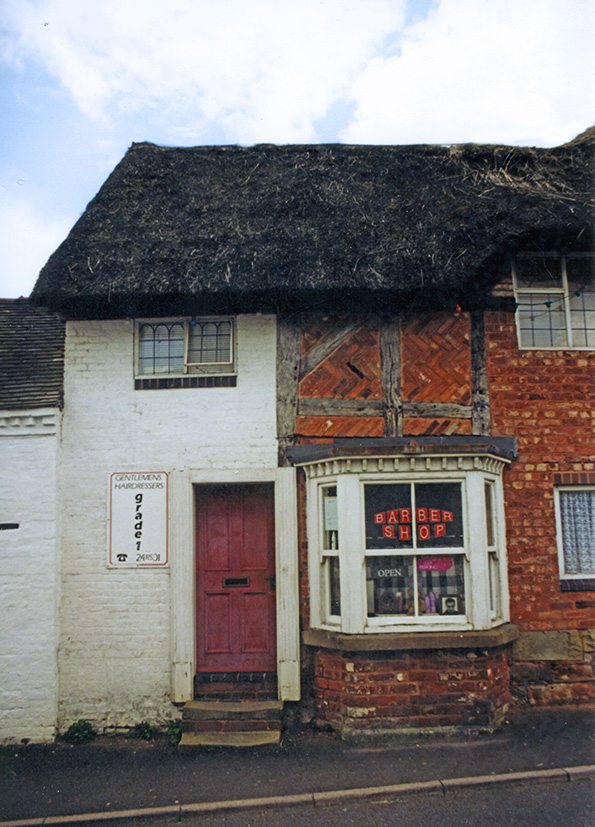 West Staffordshire thatch… On the left, at Penkridge. This century old image, shows a wide boarded gable and heavily repaired roof. The right barbers’s shop lies at Gnosall. Not far from here is a deceptive new build cottage, shown below… At Church Eaton, it lies across the road from a centuries old, timber framed thatch. It’s difficult to tell them apart… 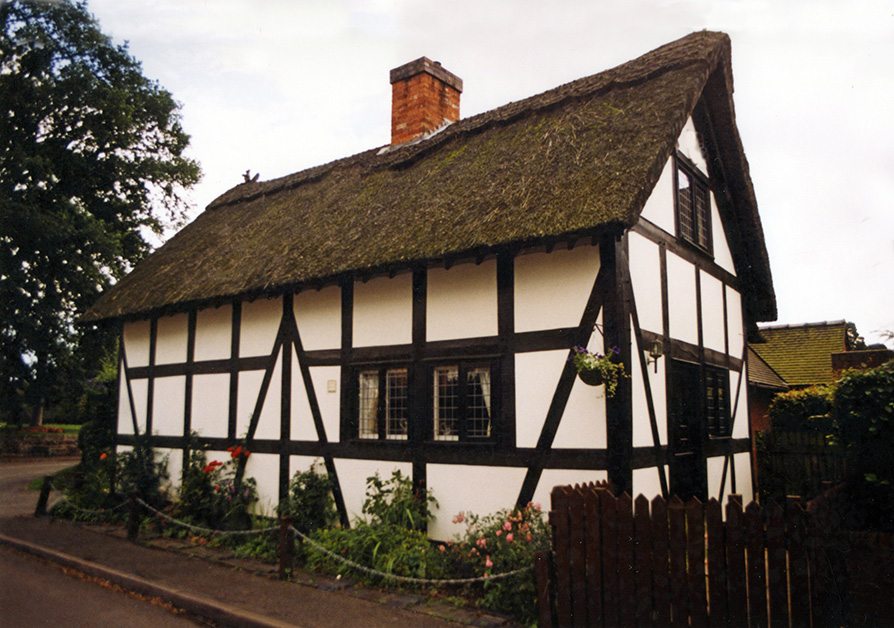 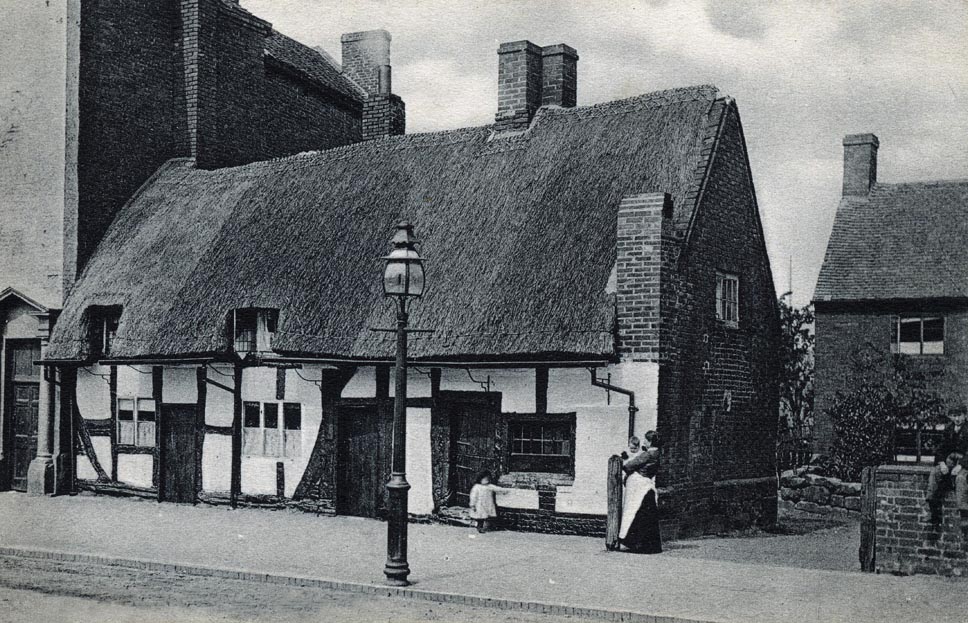 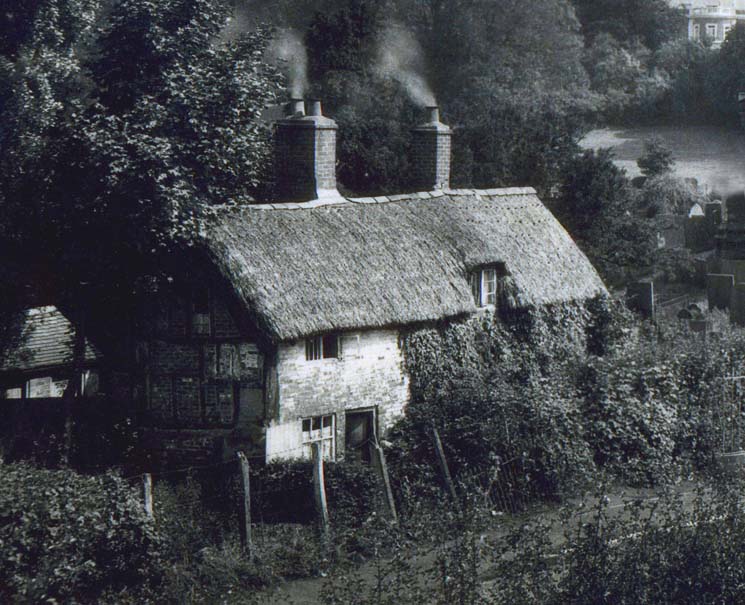 In the Trent Valley… The’ Elizabethan Cottage’, in the Horsefair at Rugeley. The cottages above, survivors of the town’s major fires in 1646 and 1708; sadly  did not long survive the Edwardian period… The long straw thatch is topped with a rope top ridge. This feature was more common in Wales and neighbouring Shropshire, but appears in other old images of this area.

Lichfield… The cottages, on the left, once stood within the city limits. Next to St Chad’s church; seen here, in around 1920. A tiled ridge, tops some directional repairwork; no doubt similar to the local rickthatching 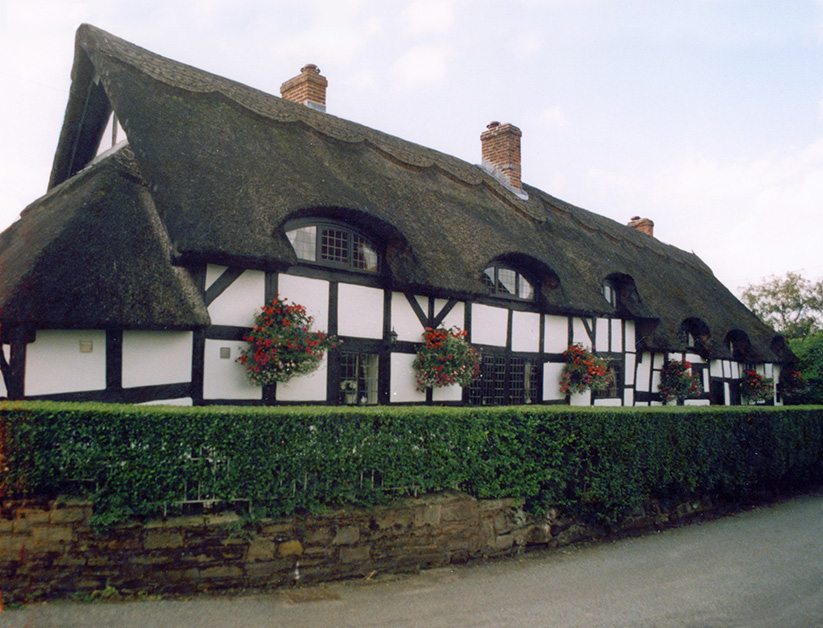 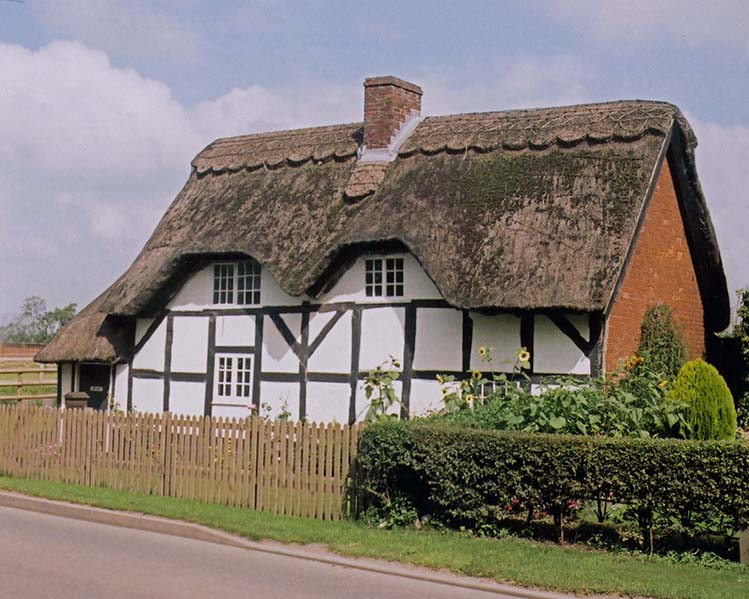 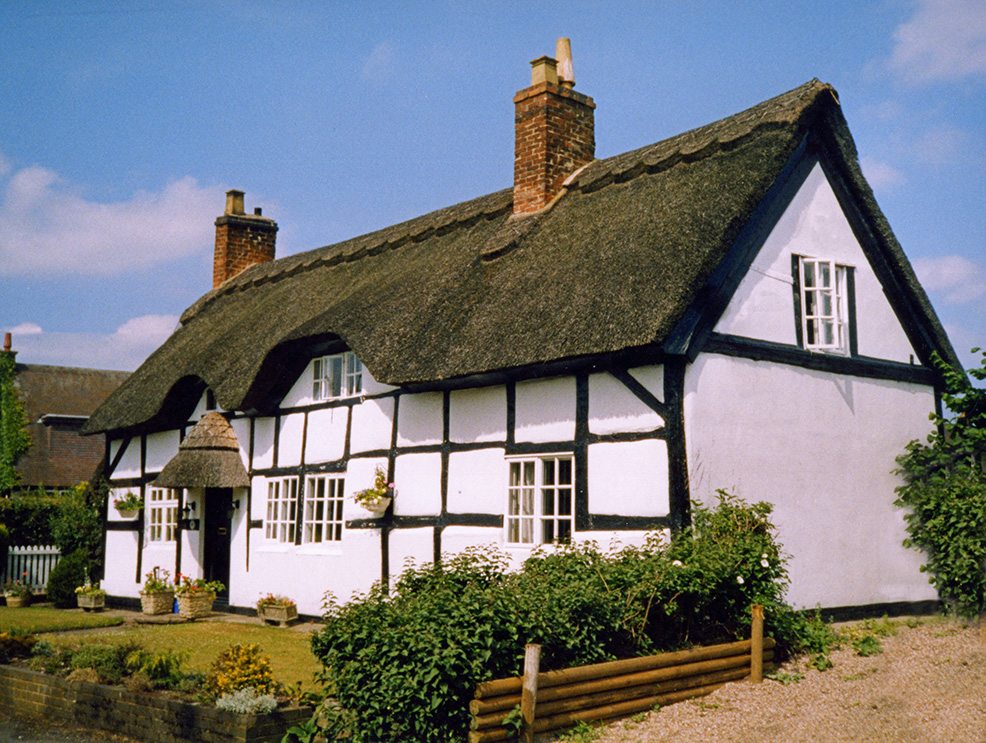 Black and white Staffordshire thatch… These three cottages lie on the western side of the county. The upper at Stowe by Chartley, the lower left, at Coton in the Clay and the right hand image is from Alrewas. This large village has more thatch by far, than any other place in the county of Stafford… 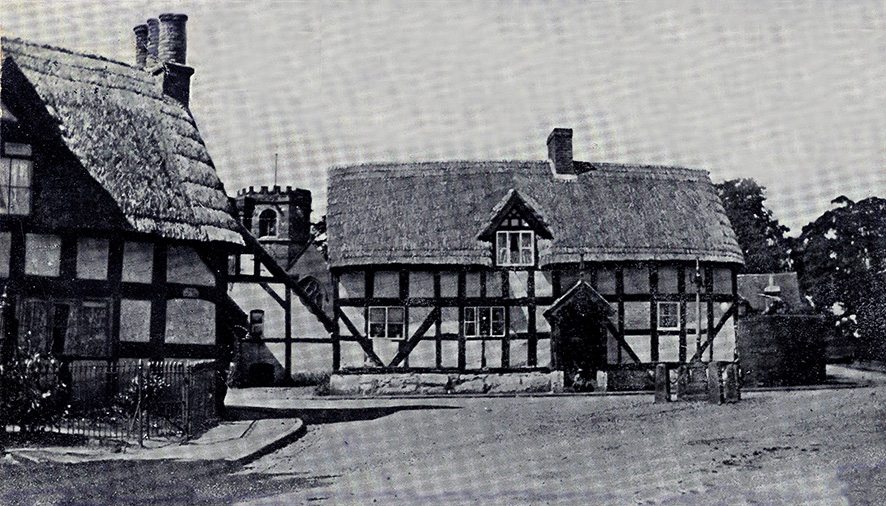 Hodnet… This Shropshire village, still has some thatch. But less, than when the above, Edwardian scene was captured. The thatch shown here, is typical for this area, being fairly angular long straw work, with rolled gables. But both roofs also have a rope top ridge. Being very common, over in Wales at this time. And it seems in the English Marches… A modern thatch is on the right. 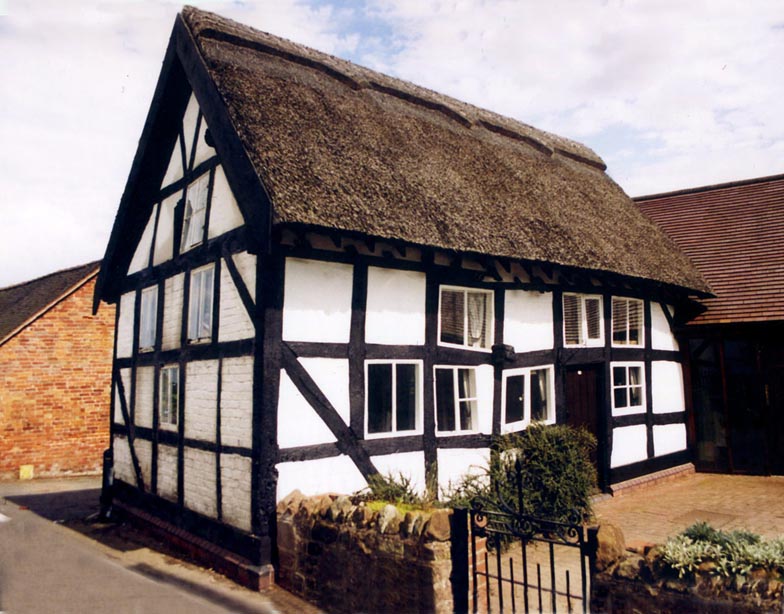 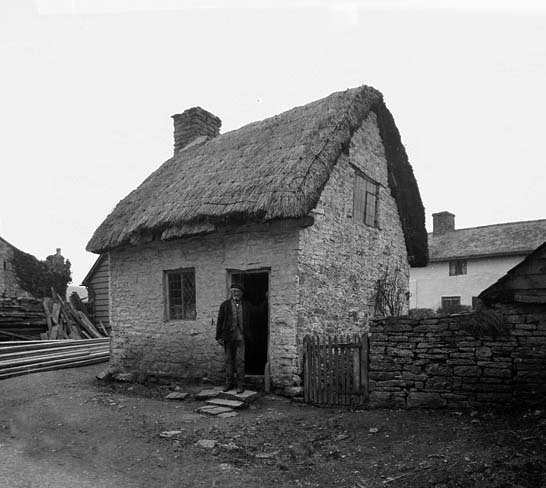 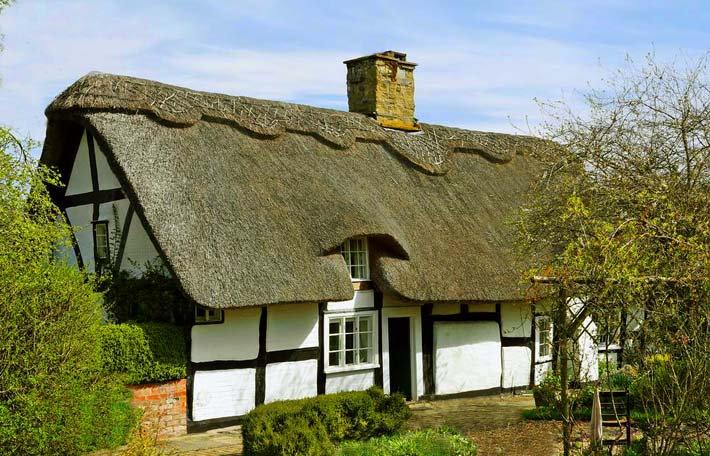 ‘A little bit of old Clun, in the good old days’.. thus ran the title of this early 1900’s postcard, depicted on the left. Almost another ‘Little Gem’ as seen at the top of this page… Except the thatch here consisted of repairwork, as used on the local thatched hayricks and corn stacks. The roof, in this South Shropshire village is long gone, unlike the thatch above, at nearby Clunbury. 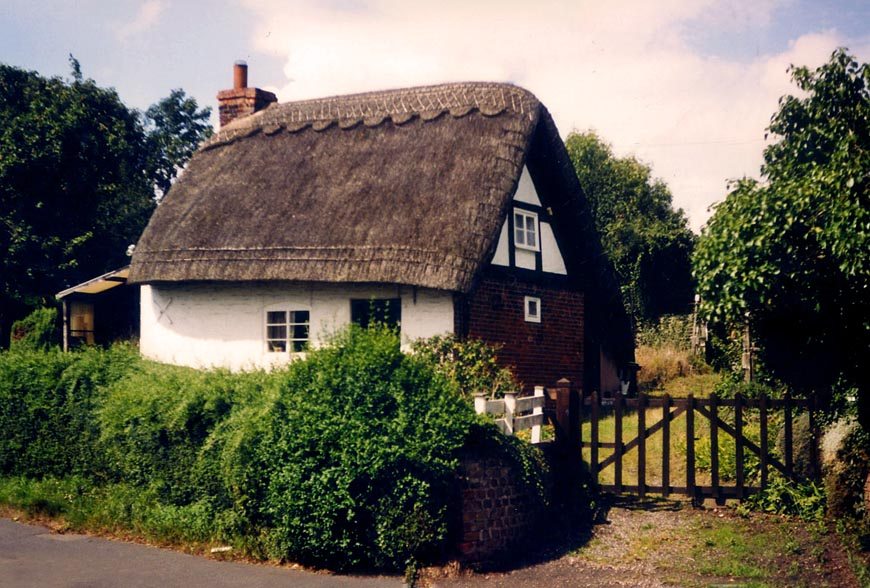 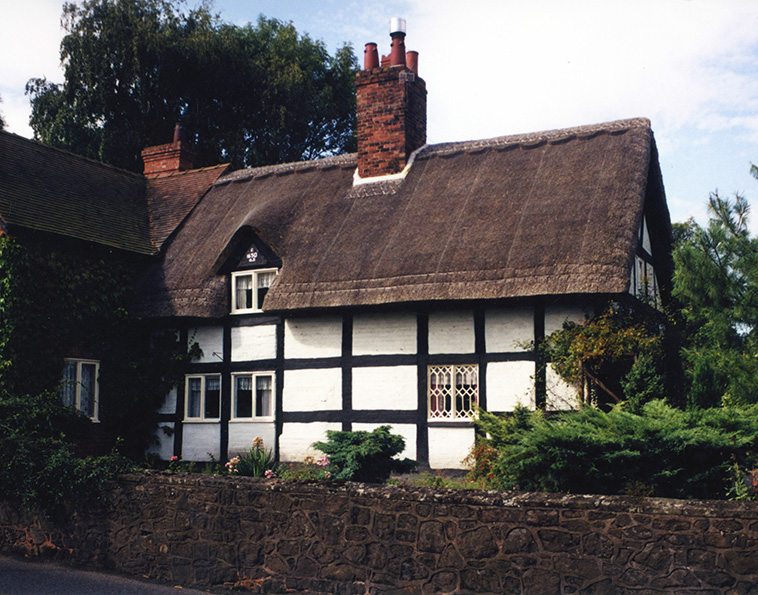 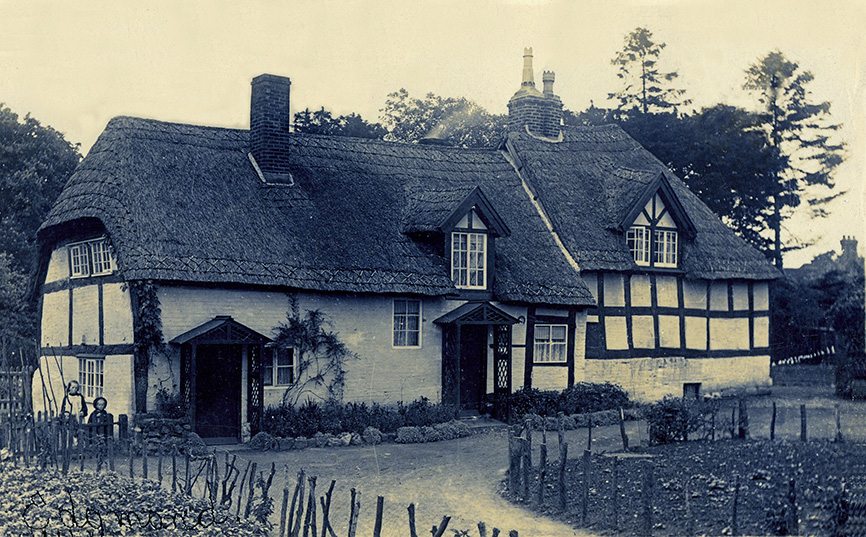 Rope topped at Edgmond, around 1900… The details on this rope top ridge, are identical to work seen in neighbouring Wales. The left, half hipped end, is also well sparred down, with several lines of liggers. Again, very similar to work seen in the principality. But any thatcher from Wales, would have had at least thirty miles to travel; to thatch this Shropshire cottage. Much more likely, is a shared thatching heritage… 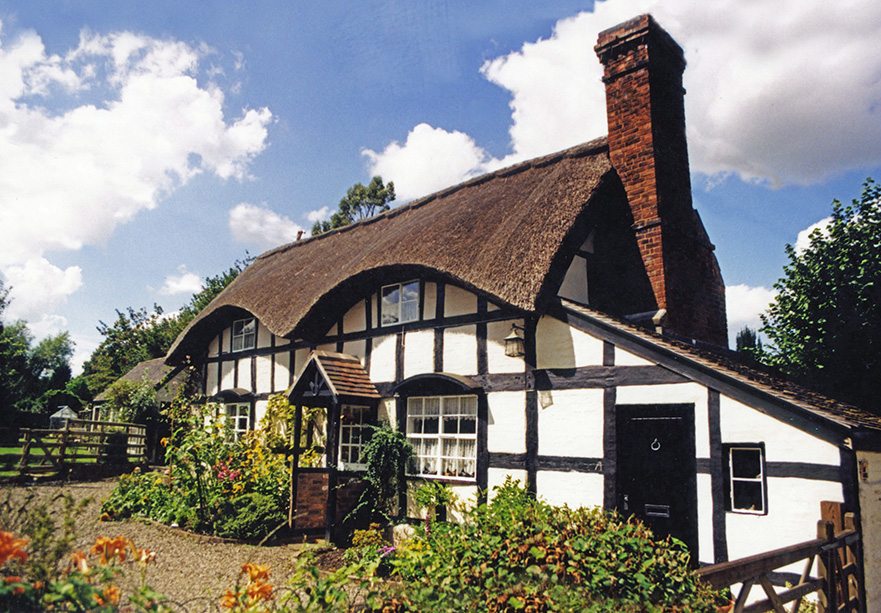 Ashford Bowdler… Where the thatch has some wide eaves, over some locally distinctive, curved windows.

Finally a tale from the Marches… 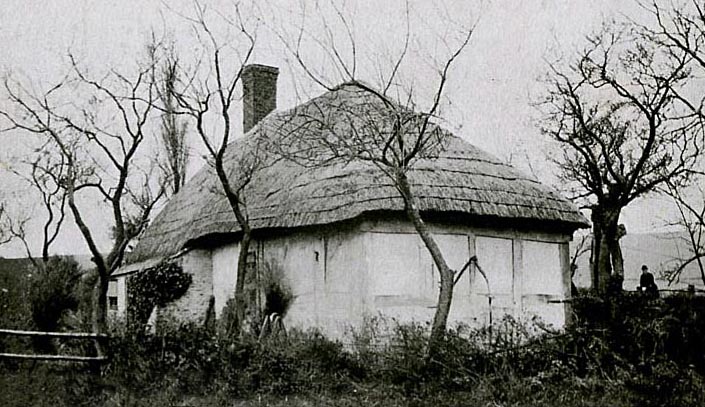 This old postcard states, Here lived ”the old old very old man Thomas Parr’ ‘in the reigns of ten Kings and Queens of England. He was buried in Westminster Abbey, 1635, aged 152 years.

Tom lived at Winnington, very close to the border with Wales. He became a celebrity late in life, after Thomas Howard, Earl of Arundel, brought him from Shropshire to London, to meet King Charles I.

The London air proved fatal for Tom and he died in November 1635, blind and with only one tooth. He was dissected, in the presence of the court and in honour of the Queen’s birthday….

At least he had a decent burial in Westminster Abbey.

His advice for others, wishing to live long was.. ” keep your head cool by temperance and your feet warm by exercise. Rise early, go soon to bed, and if you want to grow fat (i.e. Wealthy) keep your eyes open and your mouth shut”.

‘Old Parr’s Cottage’ is still with us, much restored…