Bringing in the sheaves…
A cereal crop, grown for long straw, enjoys the same treatment as that produced for combed wheat reed; until thrashing time. That process, of removing the grain from the ears of corn, marks the point where the two differing thatching materials are created. The methods of growing and harvesting also apply to the other cereal crops grown for thatch; oats, barley and rye.

The crops and technology of a former age are required to produce cereal straw, suitable for thatching. The combine harvester and the modern, short stemmed crops designed for it; are of no use to the thatcher. Happily, the machinery of the older technology was well made. And enough of it exists, to produce many tons of thatch each year.

It’s said that the best thatching straw is grown on poor stony ground; with some weeds for company. Tough conditions create tough stems. In the past the application of too much nitrate fertilizer, has probably been the cause of some roofs, in cereal straw, deteriorating long before they should. That lesson has been learned… The timing of the harvest is important, as the best thatch will result in the crop being cut while the stalk is still partially green, somewhat earlier than cereals destined for the combine.

Harvesting cereals, for thatch and food; has been the most important part of the farming year for thousands of years; long before any machinery came into use. Until the middle of the nineteenth century, there was only one way to gather the crops; by hand.

Over time, two methods of manually cutting the crop evolved. The first was to use either a sickle or reaping hook; to Reap the corn. This involved cutting the ears off in small handfuls, often high up the stem, leaving a long stubble of stems, often called Haulm; this was commonly used as thatch. In 1437 certain villagers in Somerset, still enjoyed the right of Helmbote, the privilege of being able to cut stubble, in the common field.

Medieval Reaping… As depicted in the Luttrell Psalter c1330. The practice of using a team of several women to reap, with a man collecting and tying the sheaves; was noted in Northumberland, in the early nineteenth century… image courtesy British Library. 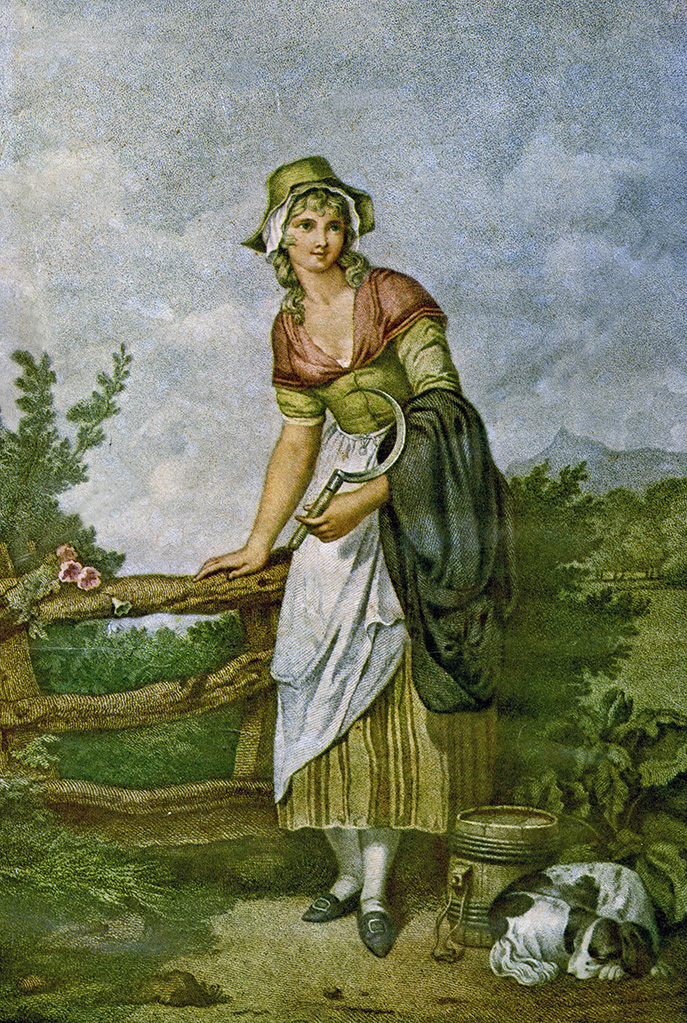 Opposite…‘The Country Girl Going A Reaping’… A very romantic image, by the artist Bartolozzi, from around 1790. She’s her reaping hook at hand; and represents the several million women, who helped bring in the harvest every year; down through the centuries.

But if labour was scarce the second method, of cutting the crop, was used. This is Mowing with a scythe. Becoming a more common method, as the rural population moved into the towns; and the amount of available labour dwindled. This method was three times faster than reaping, but not so tidy. A good man could cut an acre (0.4 hectare) a day. 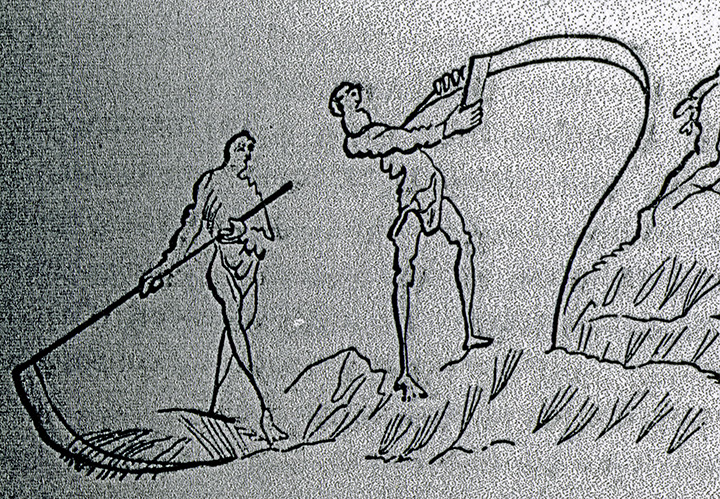 How to sharpen a scythe… In an Anglo Saxon manuscript, and in an early twentieth century harvest field. 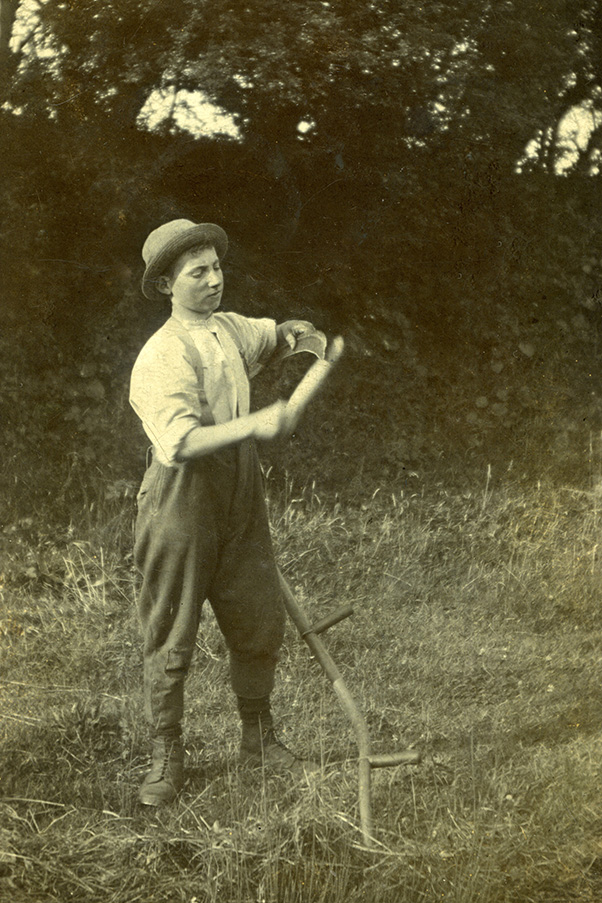 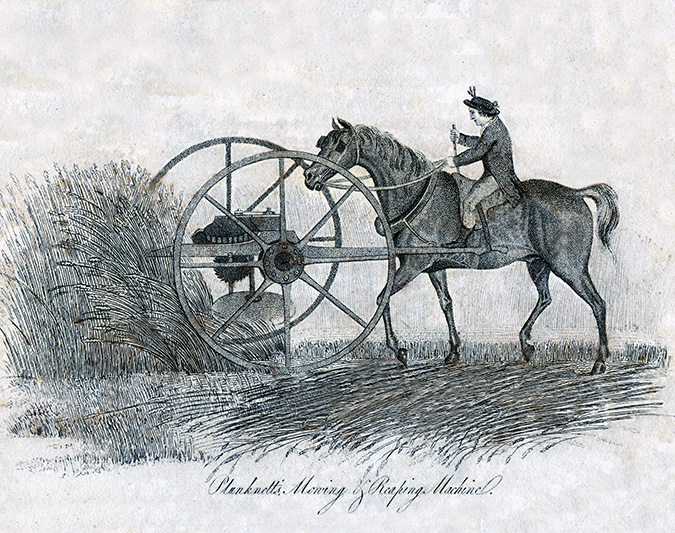 Cutting Edge… Down the years, more than a few inventions, claimed to have replaced the manual labour of the harvest; with horse power. ‘Plunknett’s Mowing and Reaping Machine’, appeared in 1807; almost half a century, before a practical solution arrived.


With all these methods of cutting, the crop still had to be gathered up into sheaves. Anyone and everyone, in a rural community, got involved. The Victorian author Thomas Hardy, has his most famous heroine Tess (of the D’urbervilles), engaged in this work. Published in 1891, he has left us a good description of her working day. ‘From the last sheaf finished she draws a handful of ears,… Then stooping low she moves forward, gathering the corn against her knees, and pushing her left gloved hand under the bundle to meet the right on the other side, holding the corn in an embrace like that of a lover. She brings the ends of the bond together, and kneels on the sheaf while she ties it…‘ This was hard work, by the end of the day, any part of Tess’s arms, not protected by the gloves she wore, were sore and bleeding. But change was already on the way; as Hardy had Tess, following a mechanical reaper. (Hardy mentions the craft a fair amount in his books; and thus pops up a few more times and has a section to himself, when I look at Dorset… Link ) 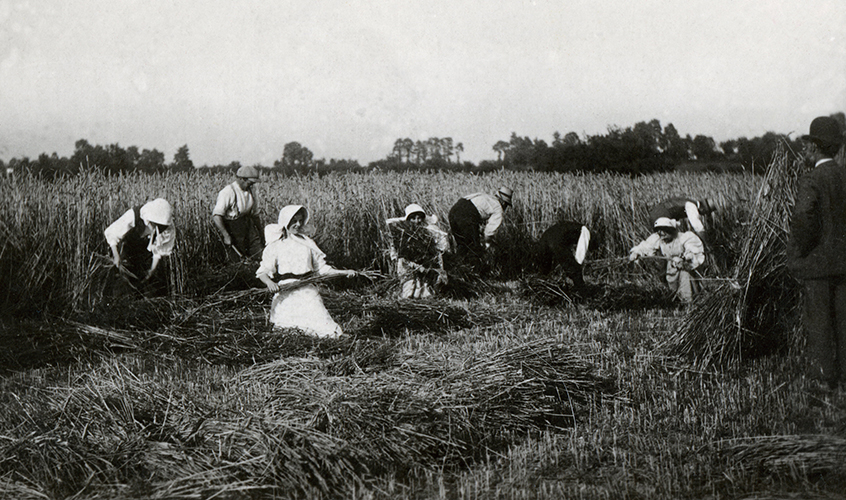 Gathering and tying the crop, into sheaves… Four ‘Tesses’ and a boy, follow not a mechanical reaper; but three men; armed with hooks. A scene almost contemporary, with Hardy’s novel. 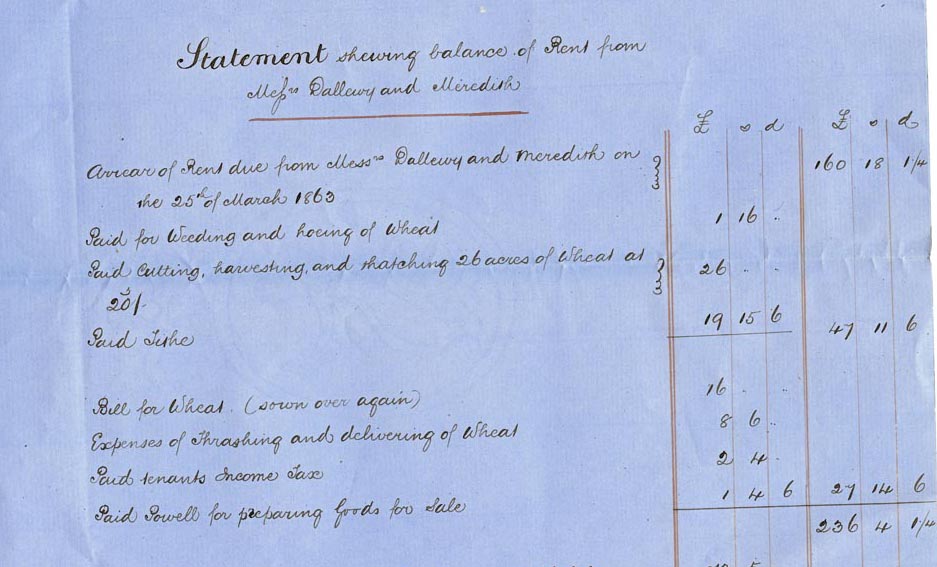 Expenses… The above accounts refer to land at Chetton in Shropshire, dated 1863. Of note is the entry for ‘Cutting Harvesting and Thatching 26 acres of wheat’; at the cost of a pound an acre… This contract work was very likely carried out by a gang of migrant workers, from either Ireland; or given its proximity, Wales. Harvesters from this last location worked hereabouts, as their native crops tended to ripen later; giving them some spare time to earn some extra income. The groups from Ireland tended to stay all summer, moving slowly across the county, as the crops ripened.

In 1851 six million Britons flocked to the Great Exhibition held in the famous Crystal Palace. In this ‘Exhibition of Industry of All Nations’, a simple invention from the United States, proved to be a sensation; being awarded a Great Medal. This was a mechanized reaping machine, patented by one Cyrus Hall McCormick. By the time he exhibited in Britain, McCormick already had a factory producing his invention in Chicago; helping turn the Great Plains of North America, into the world’s bread basket. Now the farms and arable fields of Britain would also be changed forever. 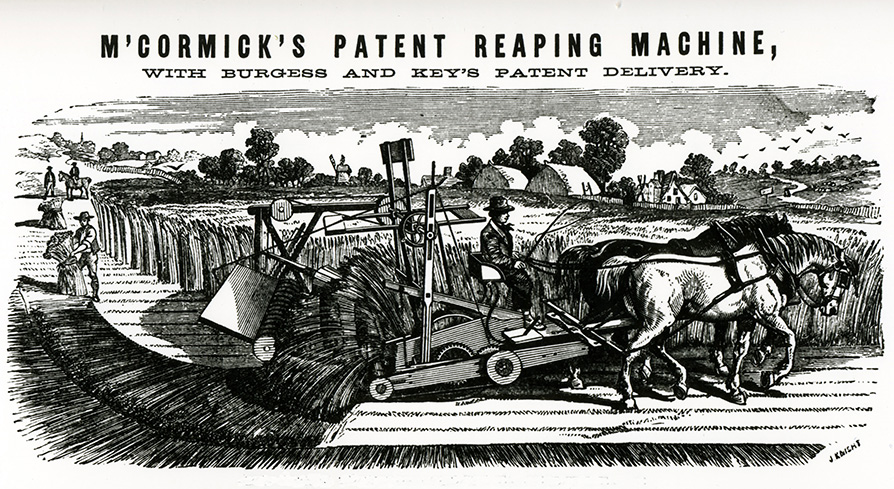 Sensational… But the crop still has to tied and ‘stooked’ 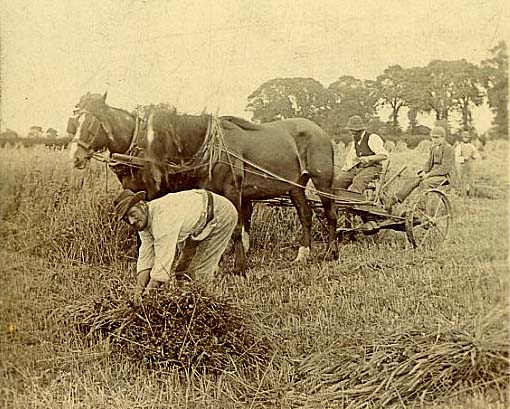 ‘Reaping in Sussex’ from an old stereoscopic view… looks as though the pair on Mr Mc Cormic’s machine had the easier job.

Powered by horses, the cutters of his reaper acted like a modern hedge trimmer. The cut crop still had to be gathered by hand, but the saving in time and labour was enormous. Around thirty years later, McCormick’s machine was improved dramatically, by the addition of a binder. This tied up the sheaves after the reaper had cut them. By the turn of the twentieth century four fifths of the harvest, was cut by these Self Binding Reapers. (Always referred to as just Binders.) These are the machines used today, to harvest all cereal thatching straw. And were the height of modernity, until the coming of the combine harvester.

Binders look as though they were designed by W. Heath-Robinson; but are very effective. The wheat is cut with a set of blades and pushed over on to a conveyor by rotating arms. The conveyor, made of canvas, carries the crop to the other side of the machine; where it is gathered and tied, when a certain weight is reached. The sheaves are then ejected; where they are picked up and Stooked.. 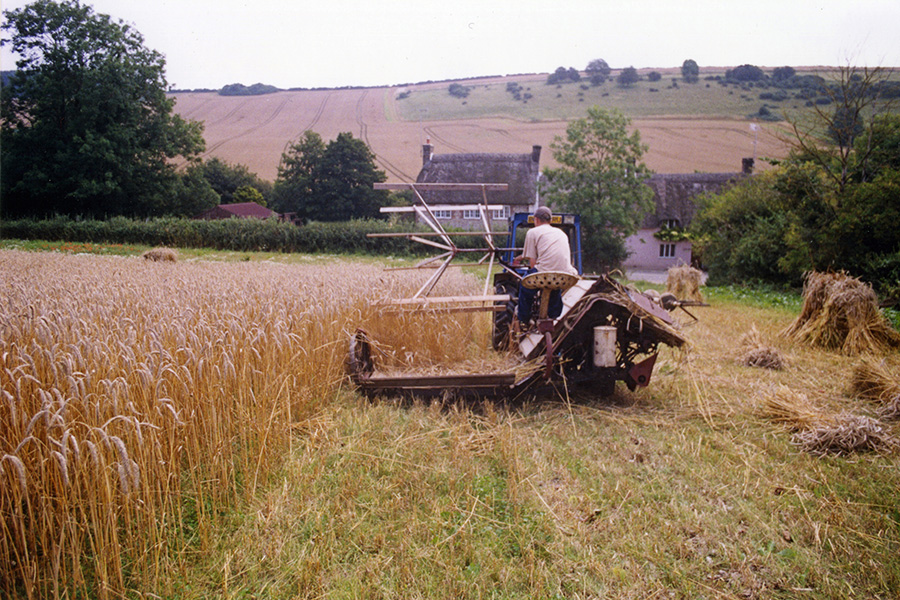 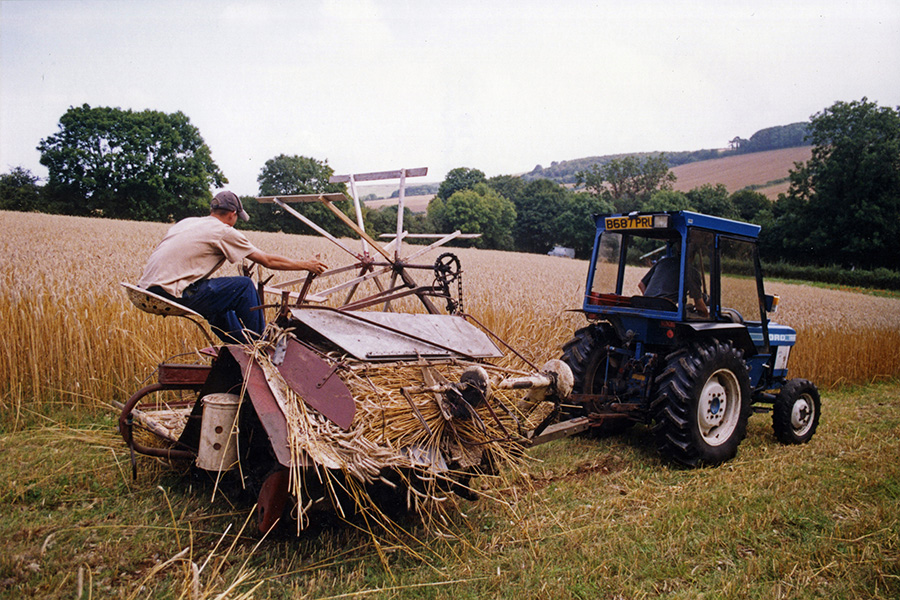 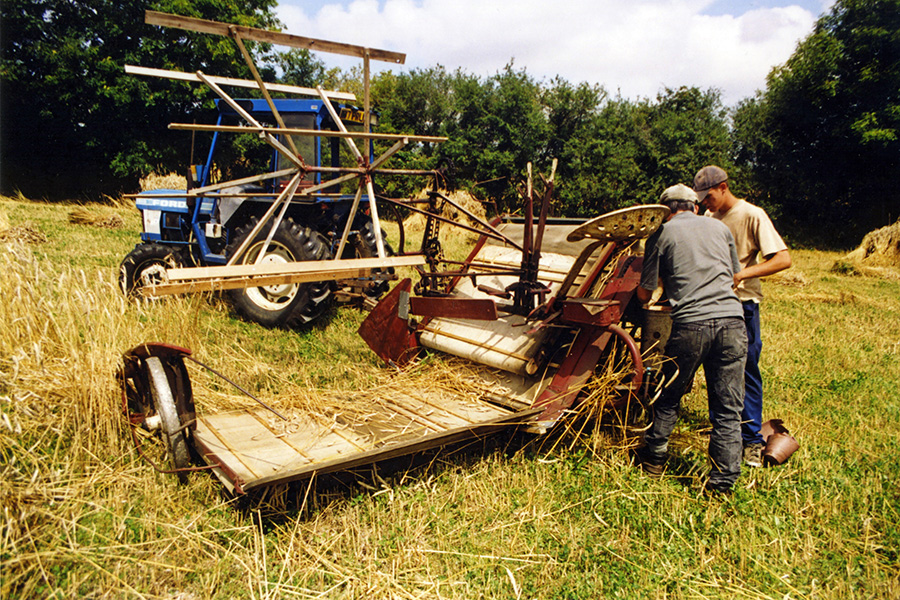 McCormick rides again… The three upper images show a later specimen of our man’s invention, made by his firm in Canada, in 1948; now cutting in a Dorset field, over seventy years on. The chap sitting precariously on the back is controlling the height of the cutting blades. He can also keep an eye on the canvas conveyor; running from his left to his right. Hopefully the only reason to stop is to renew the ball of tying twine… 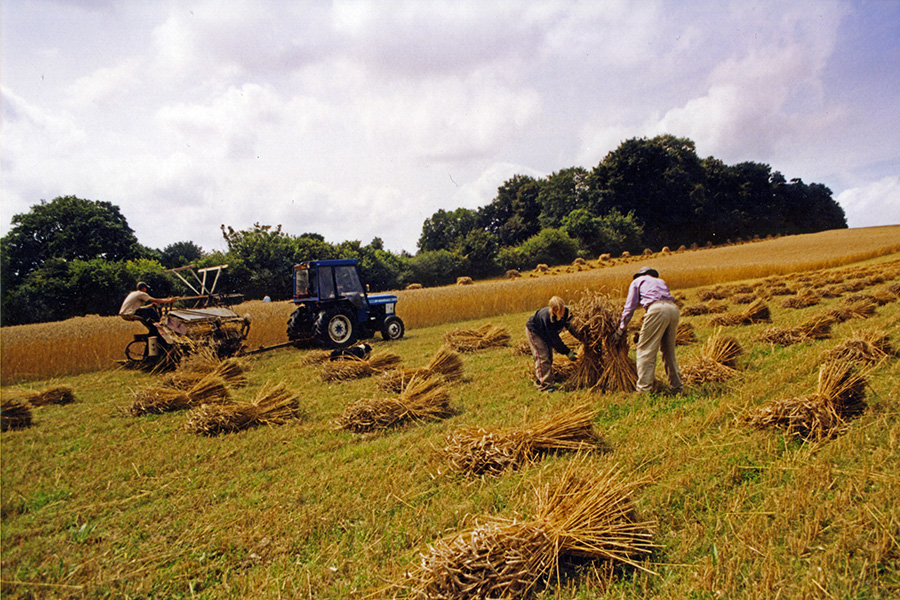 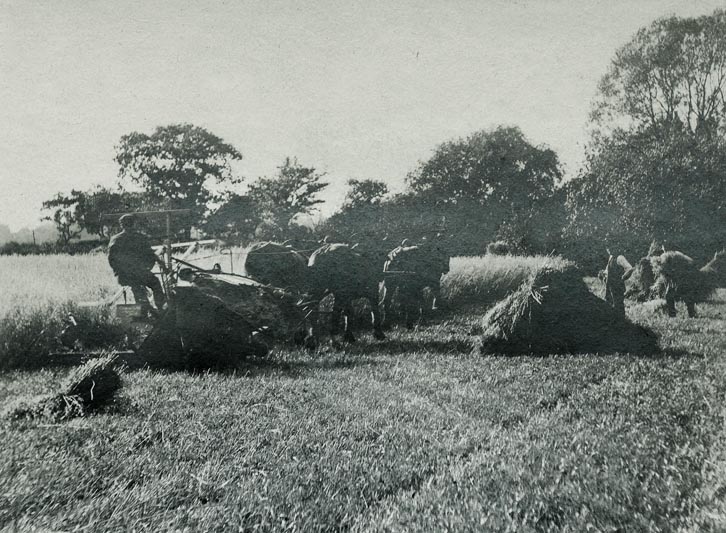 Some horsepower… The scenes above are extremely similar, only the power driving the binder has changed it seems. With four horsepower being replaced by something modern, powerful but somewhat more noisy… The left image from Cheshire is dated ‘Septr. 1904’, being titled ‘a Cornfield, Wilmslow’. Stooking up is one part of harvesting that has remained unchanged for centuries. The crop needs to be off the ground, to allow both ears and straw to dry out. 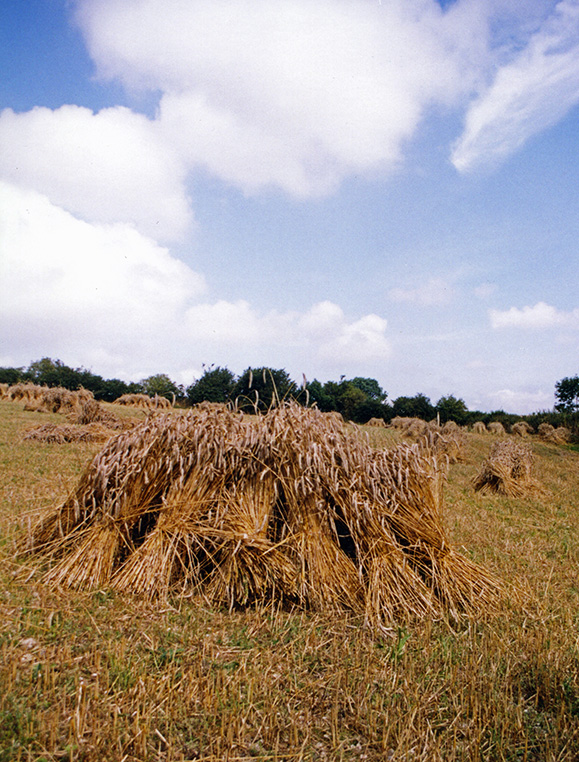 The crop stays in the field until ripe; usually in around three weeks. Or until; ‘it’s heard the bells on three Sundays’. This is a critical time. A wet July or August, can be the difference, between thatch for the next year; or the whole crop being fed into the ubiquitous combine harvester. 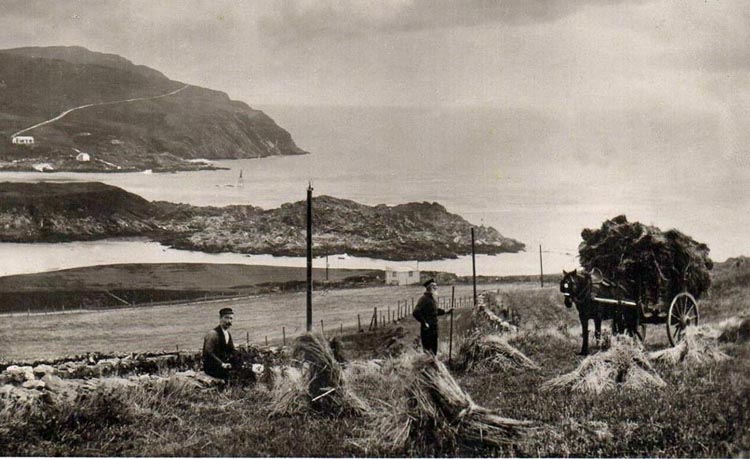 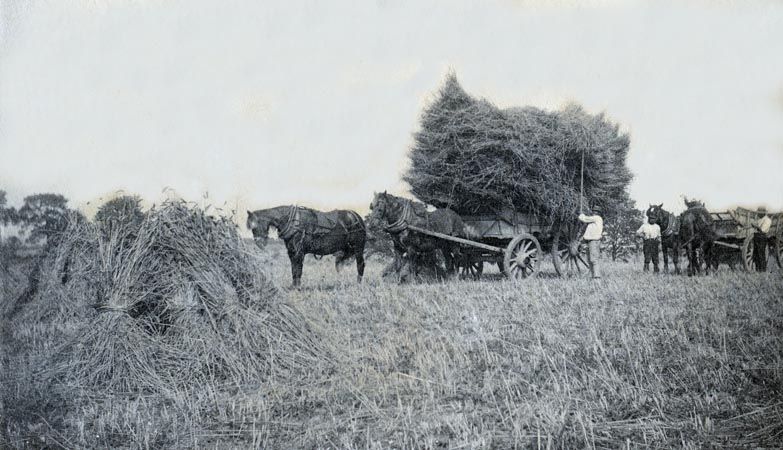 Loading up… If the weather has been kind, the cereal crop can be removed from the field. The Edwardian image opposite depicts a small scale collection on the Isle of Man; with the ‘Calf of Man’ lying offshore… Barley and oats were the crops of choice here, at this period. As the upper photo shows, much bigger loads were also to be seen. Today it is the ubiquitous tractor and trailer that collects the crop.

The crop is then stored, to further dry out and to await the next part of the process. There are often several tons of sheaves to store. being kept mostly out of doors, in Ricks. To build a rick; or Stack if in the north of Britain, is a fine art. It was always said, that a properly built rick, left unthatched is better than a poorly built one that has received the thatcher’s attentions. As, in the past, these stored crops, were nearly always thatched. Rick thatching being a great source of work, throughout the summer months. The art of thatching ricks and stacks is examined closely, in the final page of the history section. Click Here… As today a large plastic sheet, has replaced this aspect of the craft. 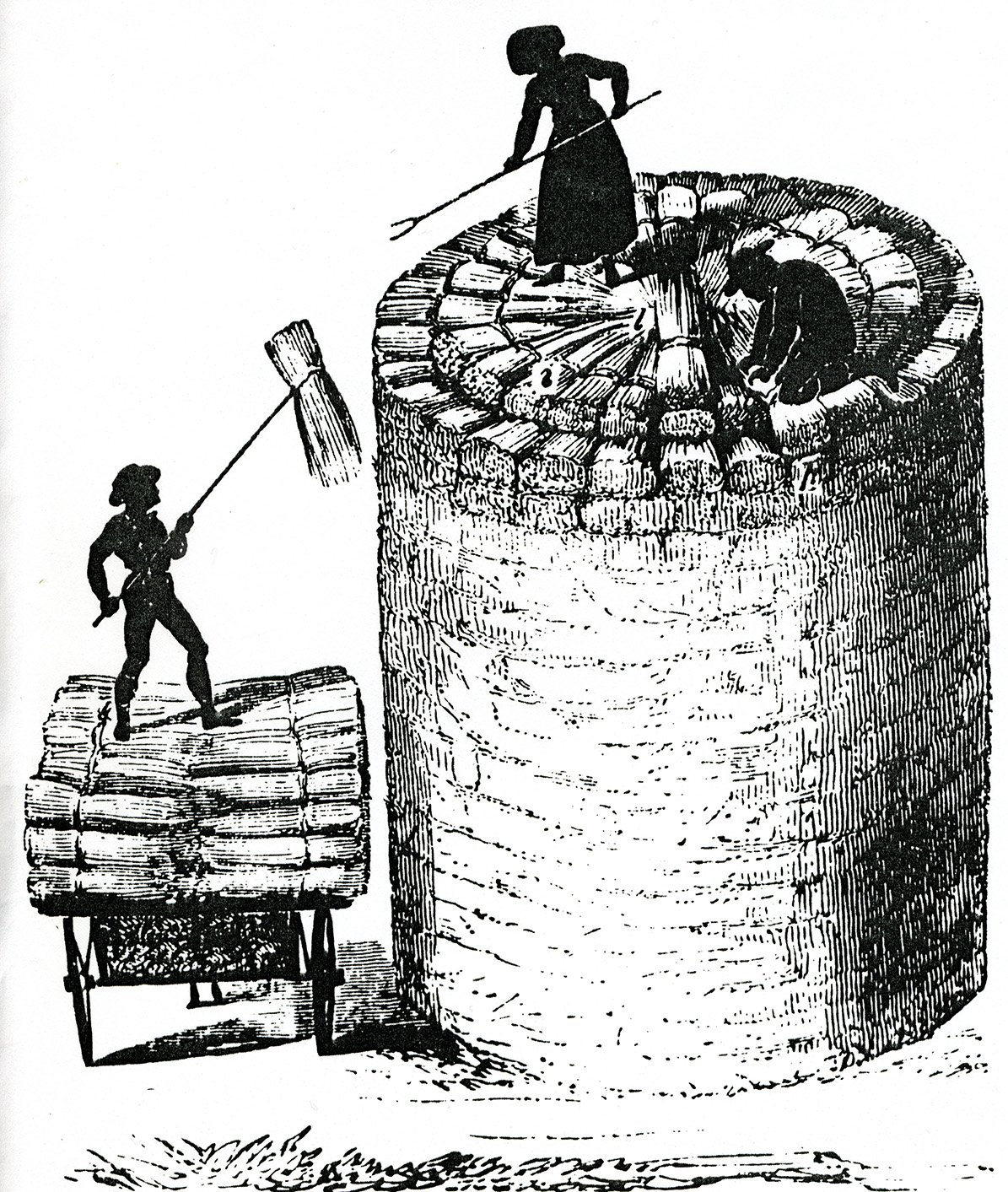 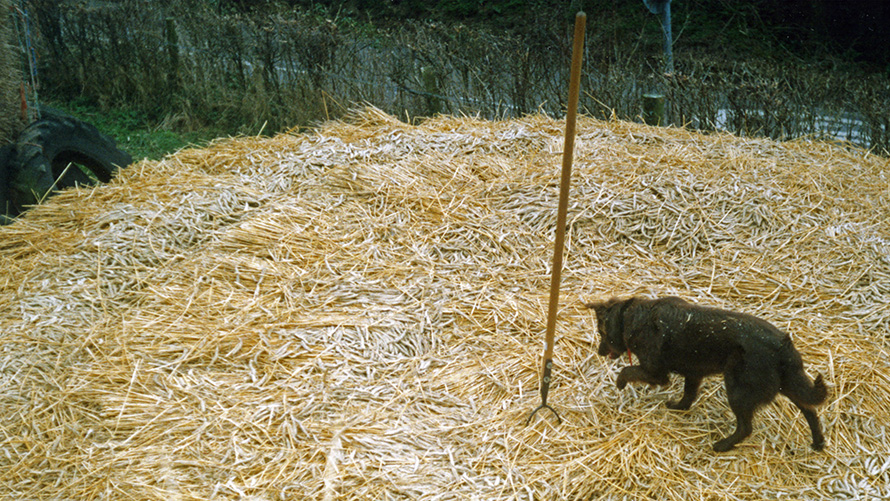 Ricks or Stacks, they’re much the same… And need building with care as this 1850’s print, from Henry Steven’s ‘Book of The Farm’ shows. Then as now, there are always enough rats, to keep a happy dog more than occupied… Below… 1900, and some small stacks, in the north of Britain… Two are already thatched. 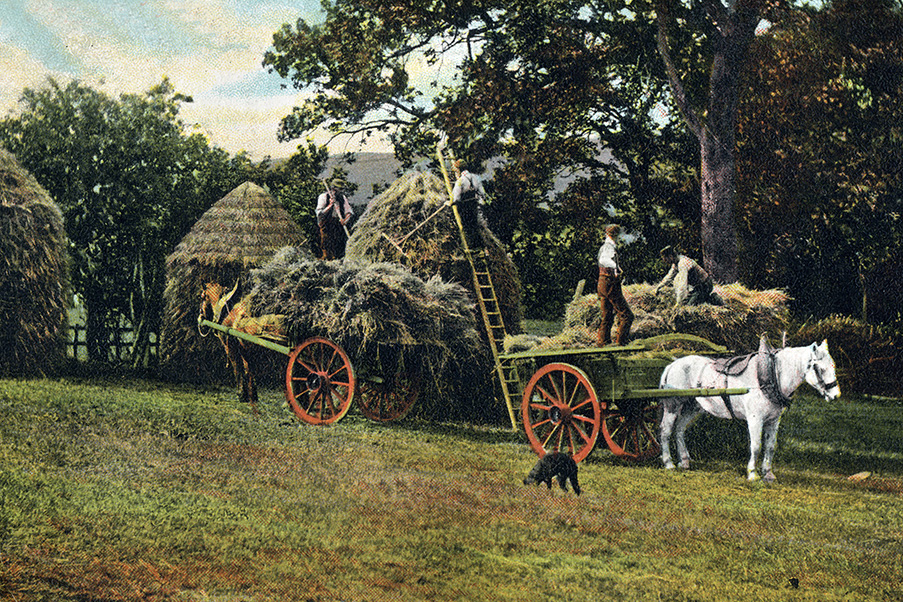 Over the coming weeks, the farmer will make a choice. Whether to produce Long Straw or  Combed Wheat Reed The material will be decided, by the type of machine used to process it… (Follow green links.)