Thatching on the Isles of Scilly

Down Among The Sheltering Palms… 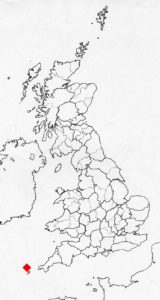 After looking at the numerous images, of other tightly roped thatched roofs on this site; the attentive viewer might imagine the Victorian family posing below, to have known some Gaelic, or the lilt of the Isle of Man. But this family may well have spoken with a Cornish accent; living around twenty eight miles and just on the horizon, across from Lands End; in the Isles of Scilly…

Most of the images found on this page, were taken by members of the Gibson family, from St Marys, the largest island. Several generations of which have recorded life hereabouts; allowing us to look back and see how thatching differed so much, from that in the rest of Cornwall. These images mainly date from the second half of the nineteenth century; showing a consistent use of roped thatch. So this tour of Britain ends, as it began on Shetland, with some thatching in the Highland tradition… 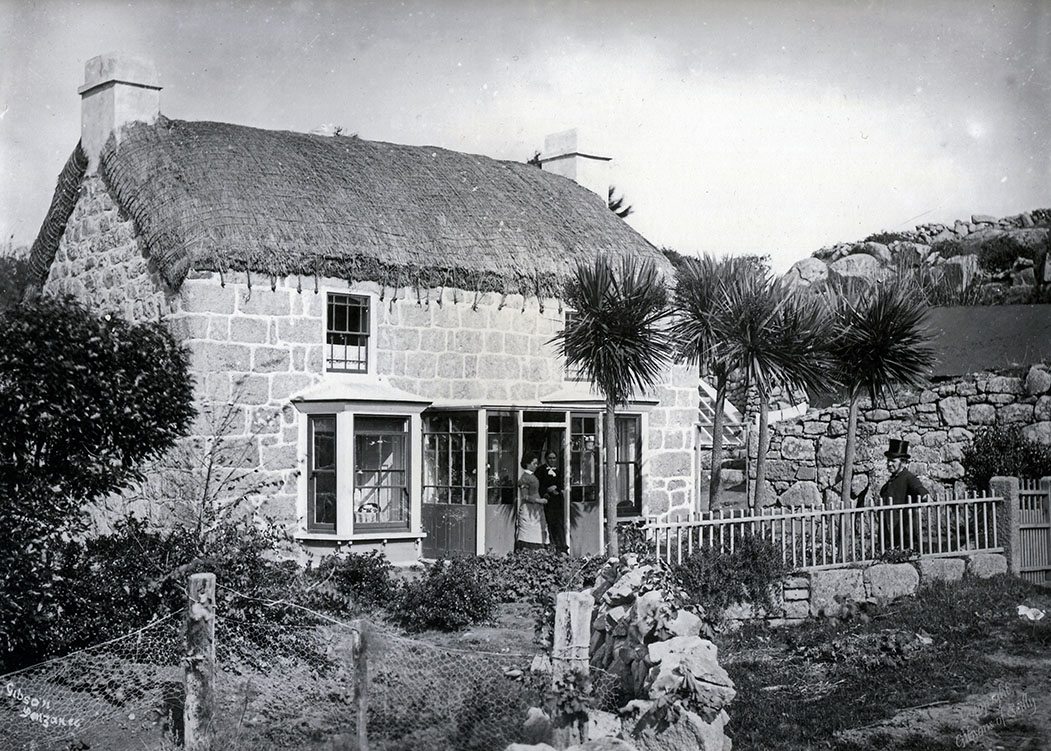 Granite and thatch… Above, at Rocky Hill on St Marys. Showing a seemingly prosperous family, living in a well built home, under a fairly thin coat of roped down thatch…

The Channel Islands; further south and almost as exposed to Atlantic gales, use the Standard method of thatching. This difference, in the thatching method, was due mainly to a lack of resources. The islands that make up the Scillies, are much smaller than Jersey or Guernsey, and there was never enough thatching material, on the islands, to cover the roofs in a standard fashion. Importation was obviously too expensive. This, coupled with a windy climate, created conditions more common to the very north of Britain. The solution being the same roped thatch, renewed every few years; as used in these higher latitudes.

The island’s roofing has been commented on by various travellers down through the years. The Italian, Duke Cosmo, visited Scilly in 1669 and was intrigued by the cottages he saw. ‘The more common ones have a peculiar sort of covering…. having nothing but a simple mat spread over the rafters, drawn tight all round, and fixed firmly to the top of the walls. This they say, is the sort of covering commonly used in Bermuda, and it is necessary to renew it every year.‘ So it would seem that the thatcher’s art had changed little, in the two centuries until the Gibsons started their photographic record. I doubt if there was much influence, from Bermuda, on Scilly’s thatching, as his grace suggested; but ships and ideas may well have come from other directions. 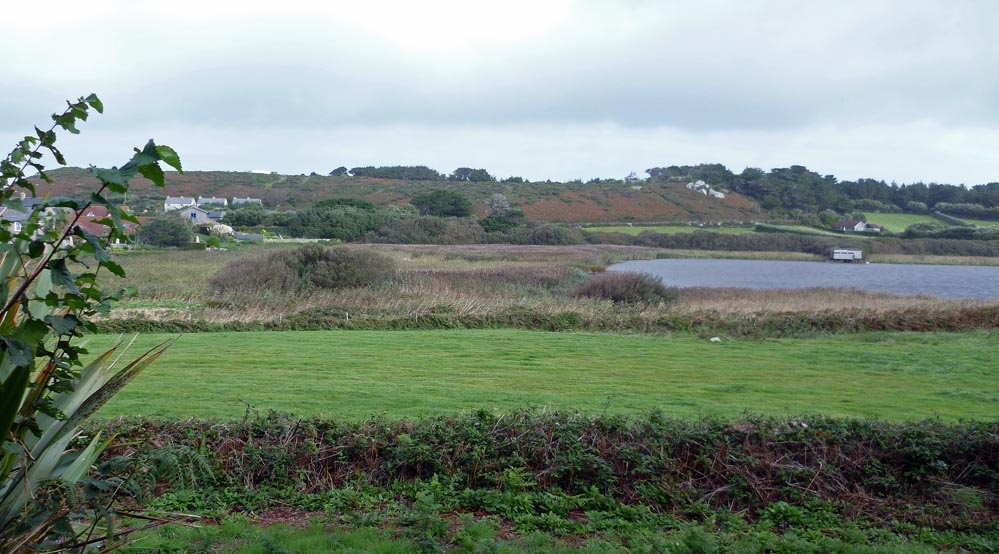 Materials… Although small, most islands still have areas of wetland and heather. These must surely have been utilised in former times for thatching, along with any surplus cereal straw. The image above is of the western end of ‘The Great Pool’ on the island of Tresco, which almost cuts the island in two. What is in short supply are areas of woodland, to supply any fixings; thus roping was the norm hereabouts; perhaps made of heather and certainly of straw, in times past.

In the century after the good Duke’s visit, a Mr Heath records a similar situation, in 1750. ‘…the method of covering is with a thin coat, when harvest is over, and they begin thrashing their corn’. A look at the photographs show that the roofs are not that thin, it would seem a top coat was added, as and when deemed necessary; not much old thatch being removed. Mr Heath also notes the method of roping used as ‘… straw rope crossing one another in a figure like the glass windows.’ The square shapes he suggests are visible on the pictures and refer to leaded window panes; a common sight, to an eighteenth century writer.

Capital Thatch… This above detail is from a 1752 print, of Star Castle and what became Hugh Town, now the capital of St Marys, the few houses are depicted with some vertical and horizontal lines; probably showing the thatching, described by Mr Heath above.

The best description of the thatching here, is found in A view of the present state of the Scilly Islands, by the Rev. George Woodley in 1822…
‘…there is something peculiar in the manner of thatching houses in Scilly, it may be observed that, owing to the great prevalence of boisterous winds here… the inhabitants are under the necessity of securing their roofs in the best manner their means will afford. For this purpose, they drive large wooden pegs into the chinks between the stones, about a foot and a half from the top of the walls, and but at a little distance from each other. Having laid on a sufficient quantity of thatch, they bind it down with straw ropes, fastened to the pegs before mentioned, extending from the front to the back of the house, and intersected by ropes of the same material running from end to end; so that, if the ropes hold the roof cannot be blown away without taking the top part of the wall! The appearance of these roofs, certainly, does not convey the idea of a ‘cottage orne’, but use and custom must justify the practice.’

Thatch existed on most of the islands, at the time of the Revered Woodley’s perambulations. In Hugh Town ; ‘the walls are low, and many of them covered with thatch… occupied by mechanics, inn holders and tradesmen…’. The original church on St Martins was thatched, ‘20 feet long with walls 7 feet high’. And on Tresco, the ‘principal village… contains about a dozen houses… they are nearly all covered with thatch’. 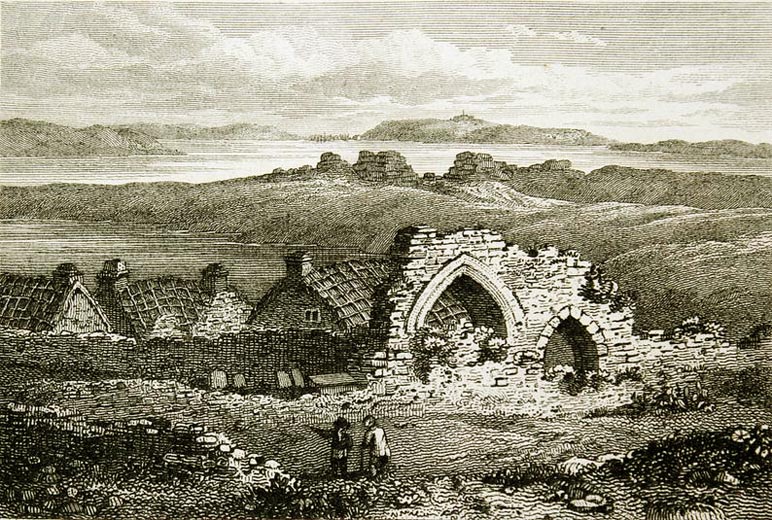 Tresco… An 1817 print of the abbey ruin,s depicts clearly some of roofs noted by the Rev. Woodley. This area is now occupied by the famous Abbey Gardens. 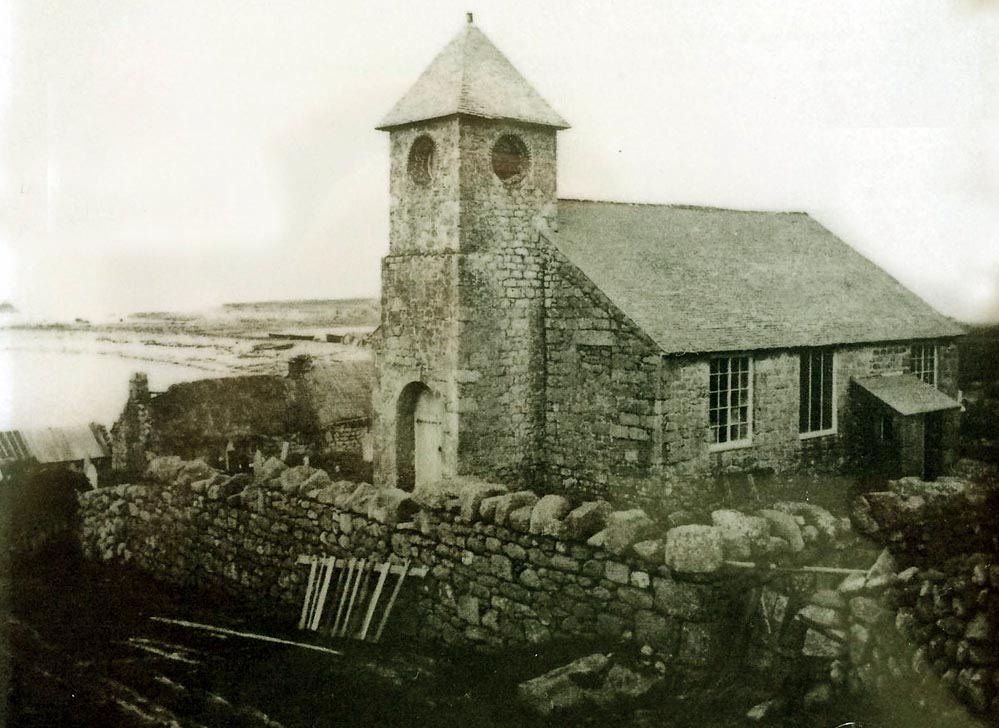 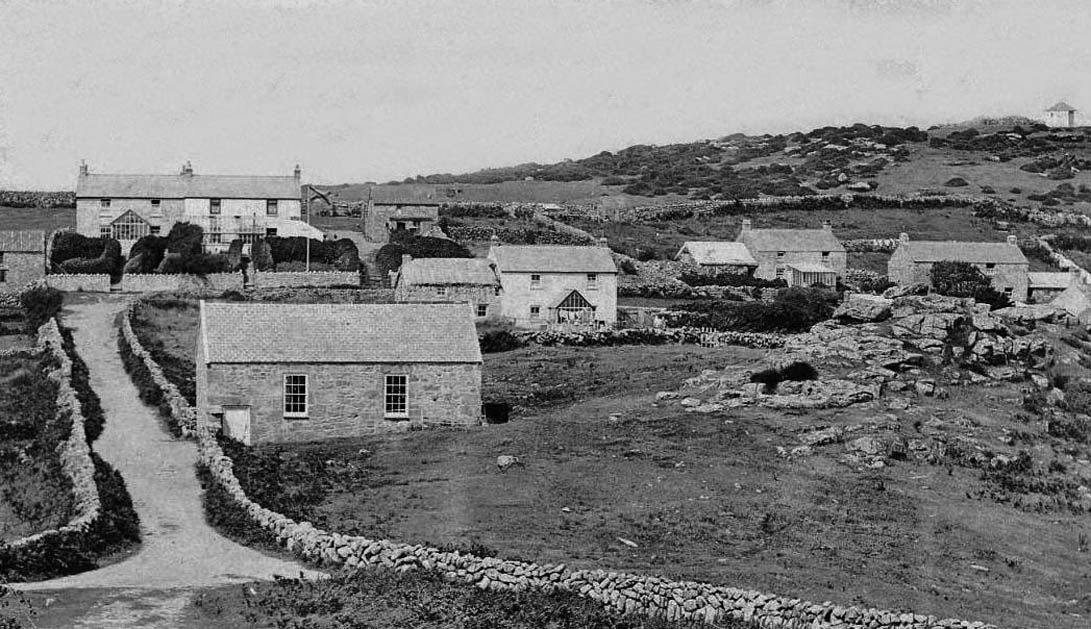 The grainy late Victorian photo above, of the island church; on St Agnes, also shows some rather dilapidated thatch cottages. Others are already covered with non traditional materials…
Opposite, on the Island of Bryher only one thatch is visible, in the centre of this Gibson image, from around 1900 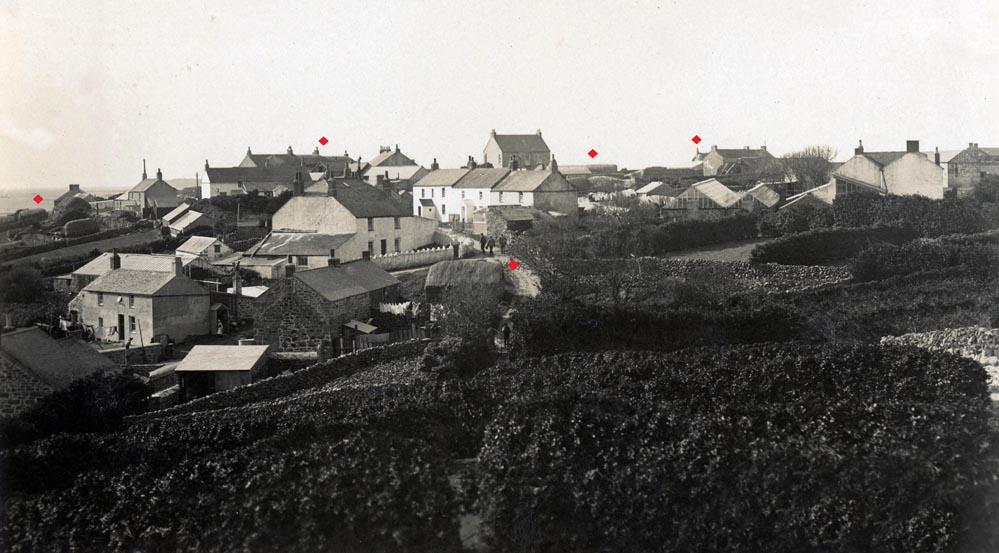 Dottted around… At first glance, the upper Edwardian image, of Higher Town on St Martin’s, depicts a group of rather new cottages, some with greenhouses. But a closer look at the red dots, reveals this settlement still retained several thatched houses; along with a few thatched ricks. The close up of the central thatched roof, also shows a recent heightening of the walls and a conversion from thatch; of the neighbouring cottage. This, along with the apparent newness of many buildings, was no doubt due to the mainly benign influence of the Dorrien-Smith family; who I think are the group in the lower image… 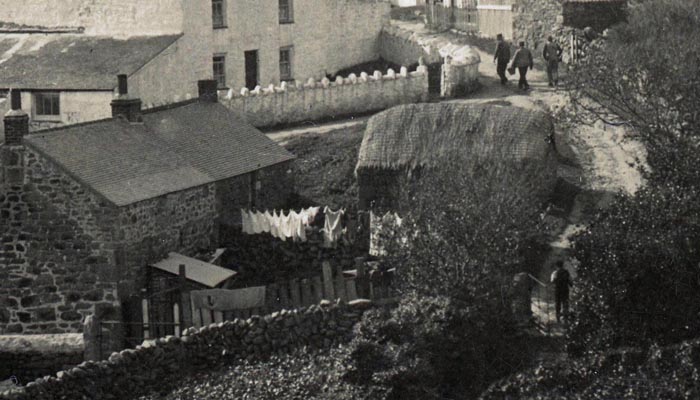 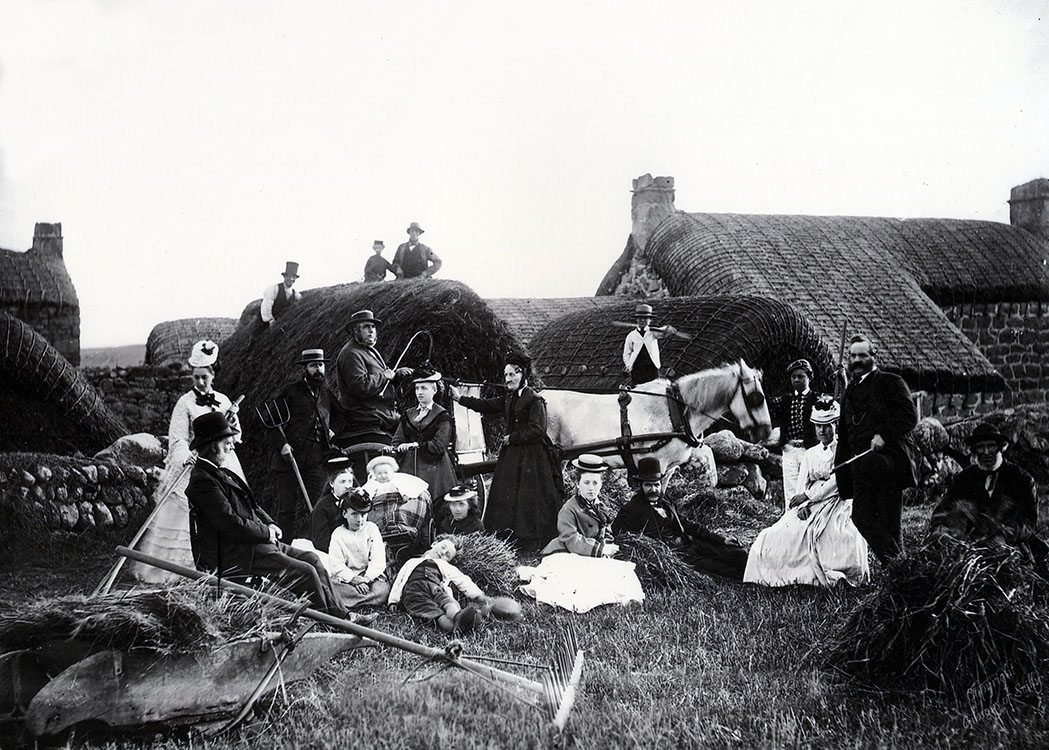 Fashion historians would love this picture… Which seemingly shows members of the Dorrien-Smith family; one time ‘Lord Proprietors of the Isles of Scilly’; now based on Tresco. Three generation of whom radically altered life on the islands, mainly for the good. But to us the gent in the top hat on the rick, is perhaps of more interest; he seems to be in the process of thatching, over that years hay harvest. The hay itself is being used as a covering, not the best material, as it soaks up water as well as shedding it. Showing how limited the supply of better thatching materials must have been. Both ricks and houses are thatched with the same method, if not material. 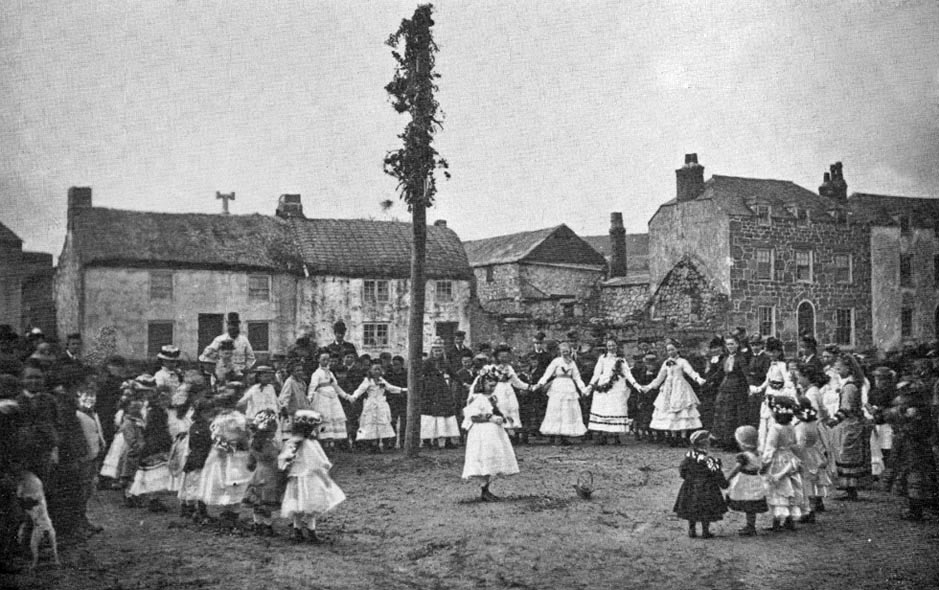 May Day… in around 1875, this charming scene, almost certainly captured by the Gibsons; also shows some thatch in Hugh Town, on St Mary’s. The right hand cottage is ruined, the centre has a well roped thatch, with the left roof seemingly in a poorer state… Maypole dancing still takes place on the islands each year. 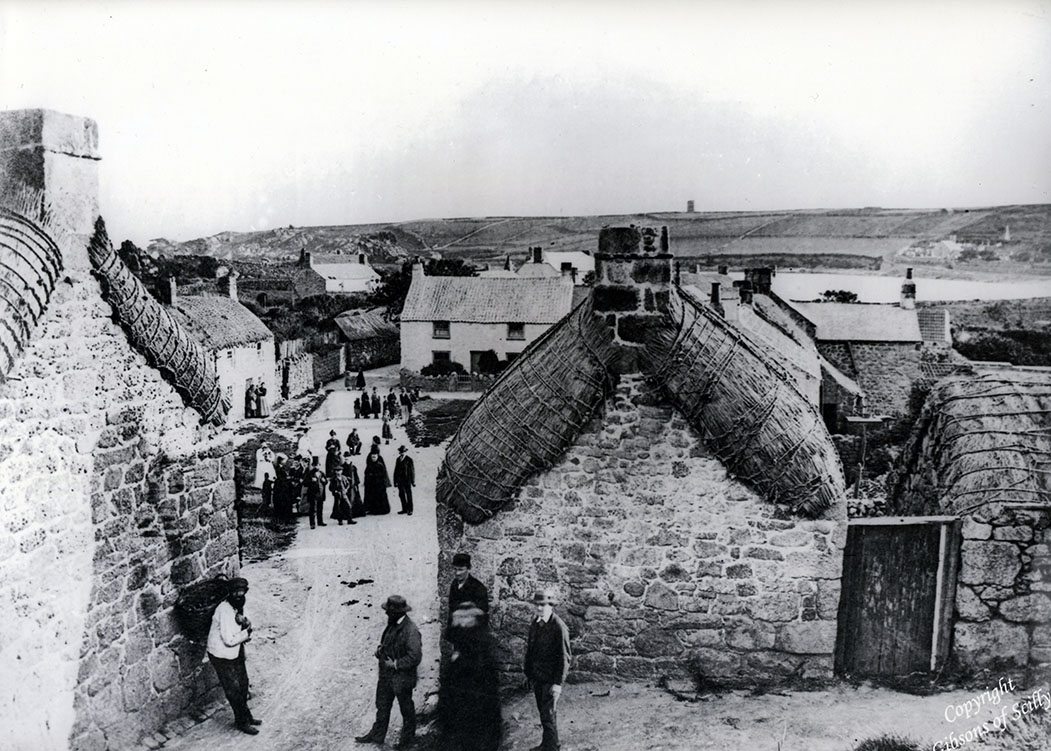 A view of Old Town, St Marys. The roping down seems very professional, but this is not surprising, in a community used to ships and the sea. The straw ropes, mentioned by early writers have gone. A close proximity with the sea, in the age of sail, would have yielded a vast amount of, longer lasting hemp substitutes. The ends of the material, used around the chimneys, seem large and the thatch is quite long; this could be water reed, from local reed beds. 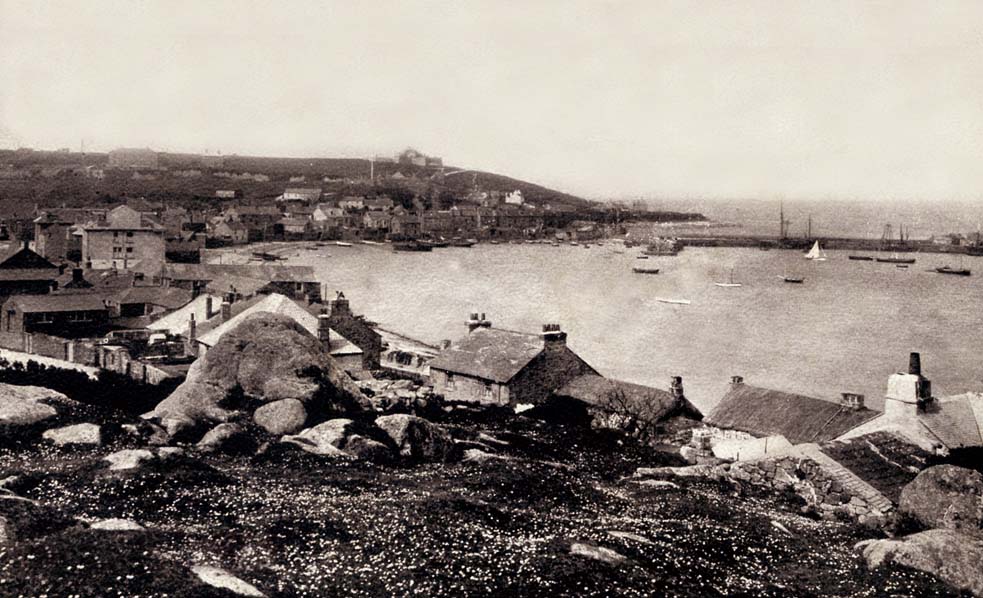 An Edwardian view of St Marys; the same view as that shown in the 1752 print… Beyond the flower strewn foreground, on the right, are two waterside thatches. Now in a minority hereabouts. 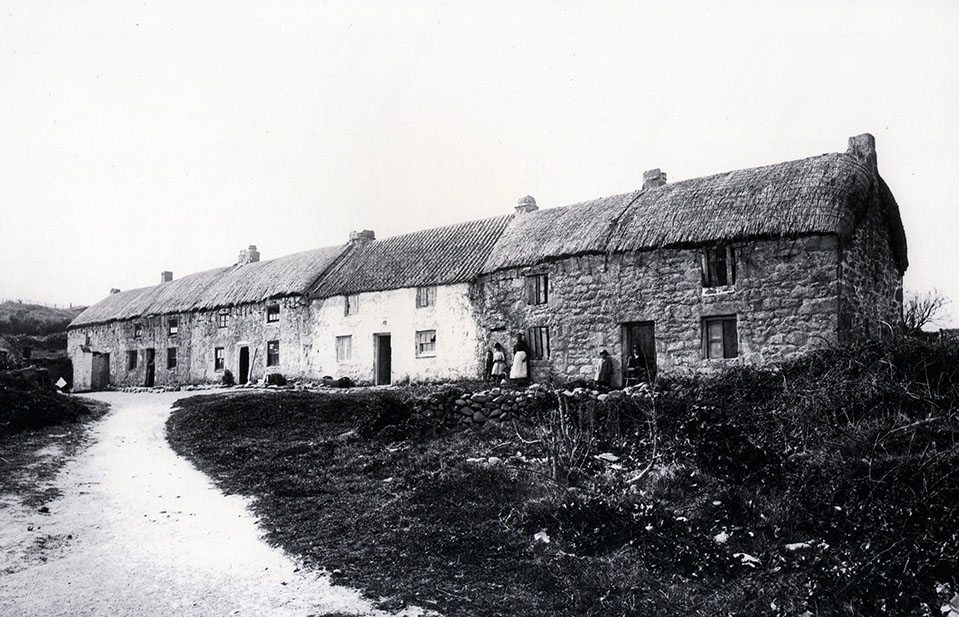 Old Grimsby, Tresco. The rot has set in and one family already sleeps under a roof of pantiles; perhaps not used to the change they have a horse shoe over the door for luck. A large piece of wood holds next door’s ropes secure against the tiles, maybe an old ships timber. They were used extensively, as timber along with thatch, was a scarce resource on many islands, both in the north and here, in the far south west of Britain……….Below is a more general view of Tresco, depicting several thatched roofs, all roped into place… The Old Grimsby row of cottages shown above, can be seen on the extreme left of this Gibson image; which dates to much the same period. To the left of the church lies a large double storey thatch, with a lower thatched shed nearby. Down near the beach, on the right, are three low thatched buildings… 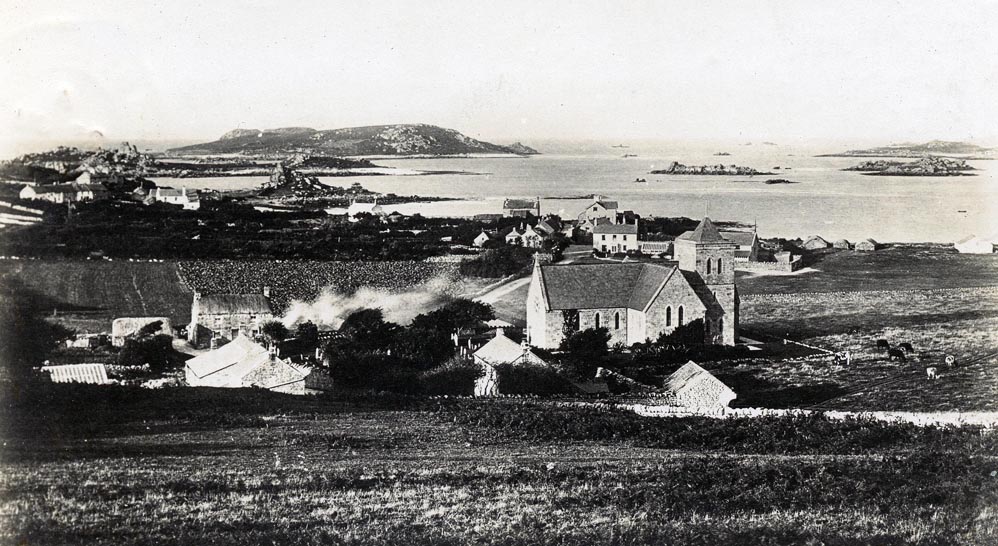 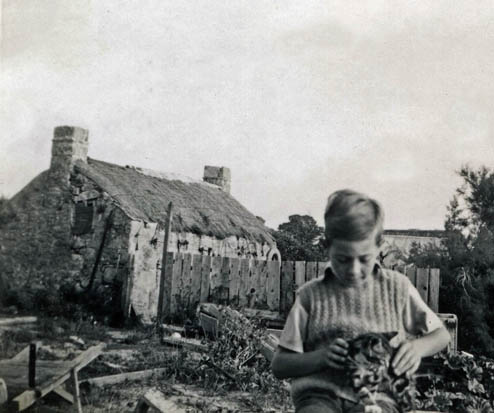 End of an era… ‘Tresco, June 1939’; a holiday snap taken a few weeks, before the Second World War ended such excursions to these islands… This boy’s family it seems, according to other photos, was adopted by a local fisherman and his cat. What is also of interest is the thatch, in the background.This could well be the fisherman’s home; or, given it’s poor state, his working hut. The thin layer of thatch is, as ever, roped down; some iron sheeting helps form a ridge. The craft of thatching would seem to be drawing to a close hereabouts… 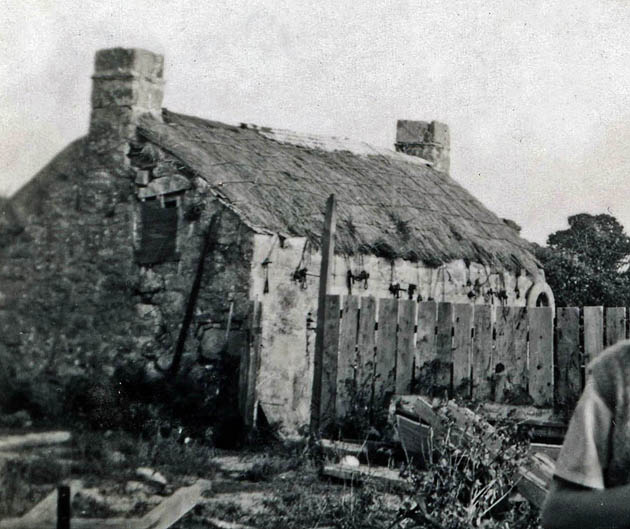 The craft held on in the Scillies for another fifty years, after the above holiday snap was taken and is now extinct on the islands. Slates and Bridgwater pantiles, brought in as ship’s ballast, helped hasten the demise of thatching , throughout the nineteenth century and as the twentieth progressed. The last thatch roof disappeared as late as 1990, on the island of Tresco. That cottage received the protection, of becoming a ‘Listed Building’ just two years later! Now for the first time in their history, the islanders have to rely totally on imported materials; to keep themselves dry…