Thatching, in the Counties of Perth, Kinross, Clackmannan,
Stirling and the Kingdom of Fife. 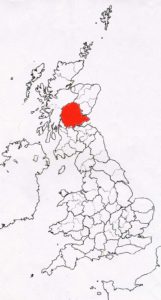 As seen in previous pages, the movement in eighteenth century Scotland, to improve all aspects of life; included changing the traditions of thatching. Here it also went one stage further and provided a new abundant material; that still dominates the local craft today.

The desire to stabilise the banks, of the Tay and Forth estuaries led to the planting of large reed beds. These very quickly became a source of thatch, for the surrounding area. A Mr Henry Crawford got the ball rolling in 1776; near Dundee. Further beds were established, on the north bank of the Tay in the 1830’s. The beds at Errol, were estimated to be producing over forty thousand bundles of water reed annually; within a decade of planting. After some years of redundancy, these beds, where brought back into production. But have an uncertain future, due to the abundant supply of imported water reed…

The local thatchers adapted this new material, to suit the local styles. Often the reed was cut in half. In the 1970’s this was noted on a roof, at Auchtermuchty in Fife. Here, cut reeds had been driven into the original, turf based, oat straw roof. This seems to be a logical extension, of the stobbing method. A ridge of turf, on a clay base, completed the roof.

The turf and cereal straw of the roof in Fife, were the original materials in this area; both of these and the use of rushes, was also noted in Kinross and Clackmannan in 1814. These more Highland methods also held sway in western Perthshire; long after this date. Here a crook and caber fixing, along with some spars and liggers, was quite common. Using mainly straw, but also heather and ferns.

Today, the area’s thatch is mainly found in Fife and around the reed producing areas of the Tay… 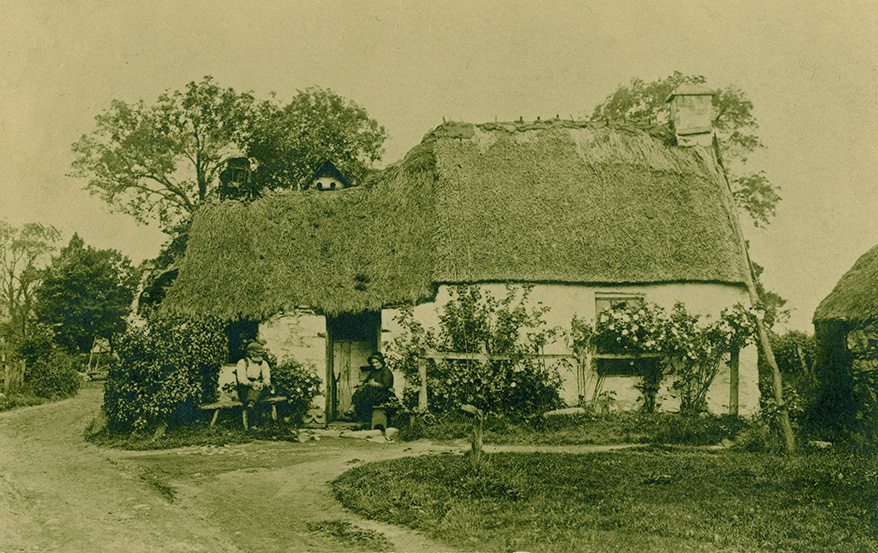 Changing over… At Muirton of Ardblair. The upper photo shows a cottage, twenty miles or so north of the Tay, finally succumbing to water reed. The right hand end being recently completed and topped with turf. However the thatching methods have not been perfected. As some of the top courses have blown or slipped off! It now needs the help of a leaning caber to hold things on, at the boarded gable end. The left side of the cottage still has it’s straw thatch, done in a Northern style. The Highland tradition having already disappeared from this locality, as well as further south. The lower image shows the scene a little later, in around 1910. Now the cottage has wooden gable ends, with turf on both ridge and gables. The left hand part of the property has decayed beyond redemption! More Tay thatch is shown covering the building on the left. 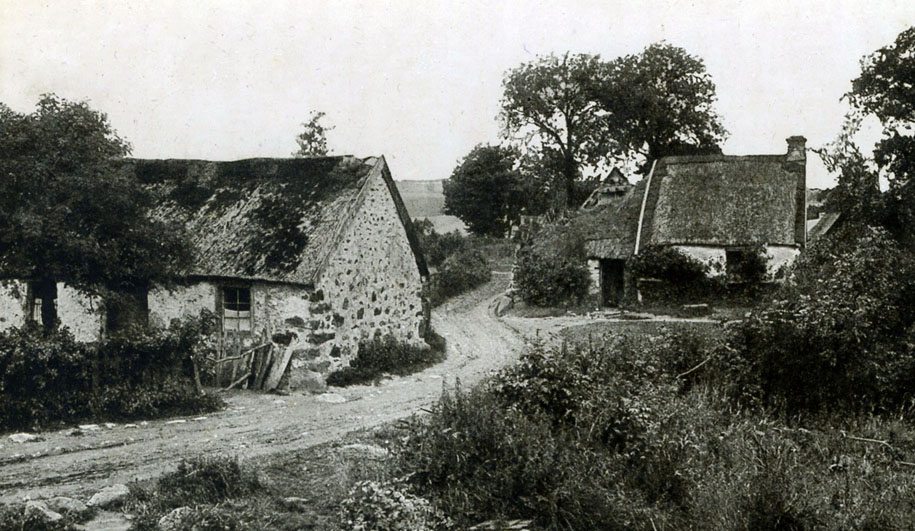 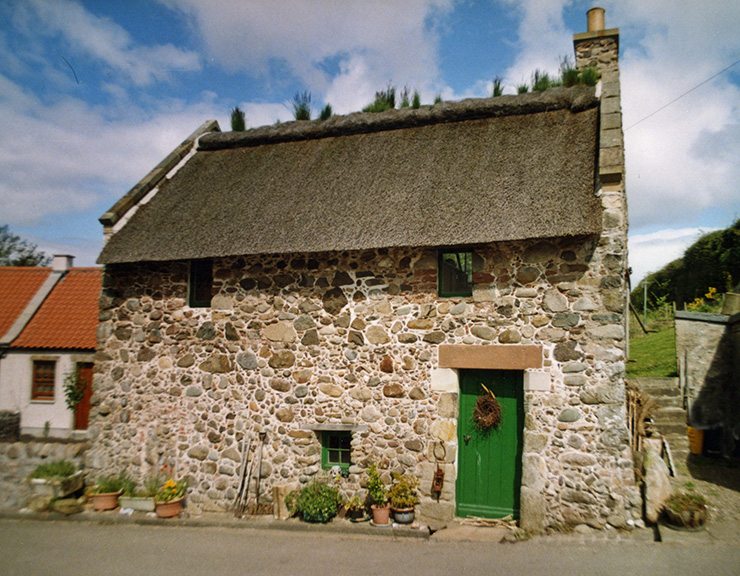 Tay reeds and turf… At Collessie, a Fife village with more than a few attractive thatches. The lower cottage having a straw ridge. 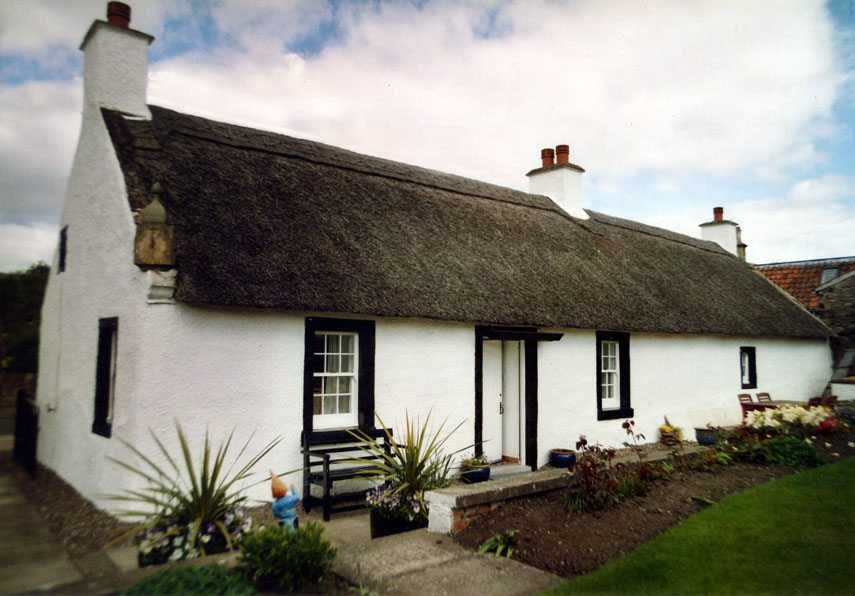 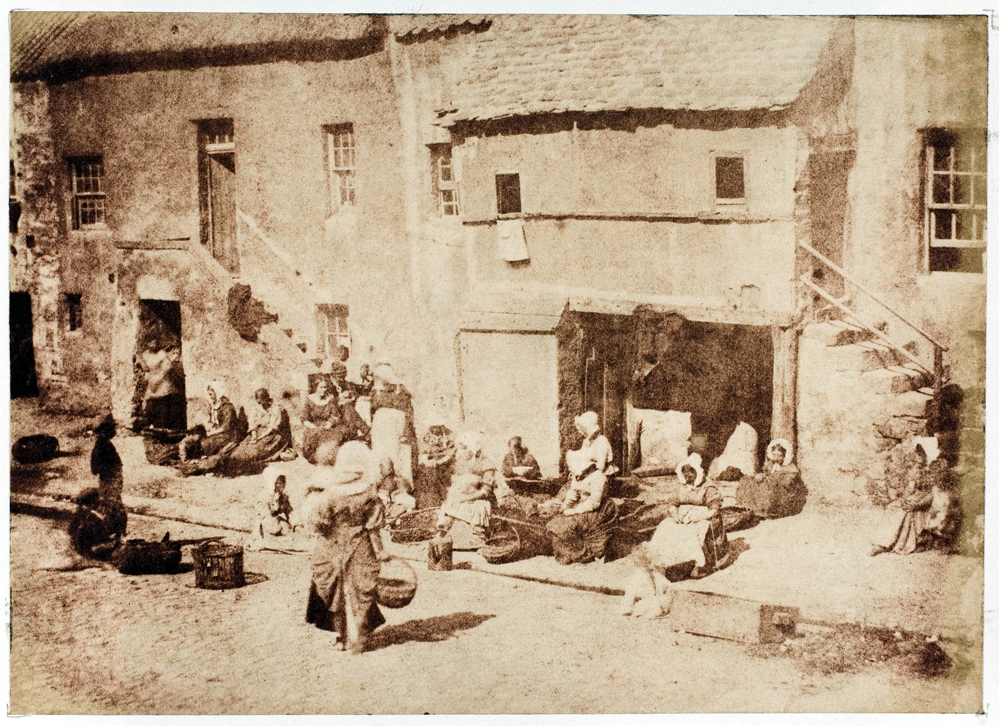 Town thatch… the image opposite is entitled ‘St Andrews, North Street, Fishergate, Women and Children Baiting the Line’; the animated scene being captured by David Octavis Hill & Robert Adamson. These gents were early pioneers of photography, arriving in the Fife town in c 1845. In the top left hand corner can be seen the eaves of a water reed thatch, no doubt consisting of Tay reeds. The use of thatch may well have become restricted, some time before this image. In 1812, the owner of a house in Market Street applied to the town council that his roof, ‘ in much need of repair is allowed to be thatched’ 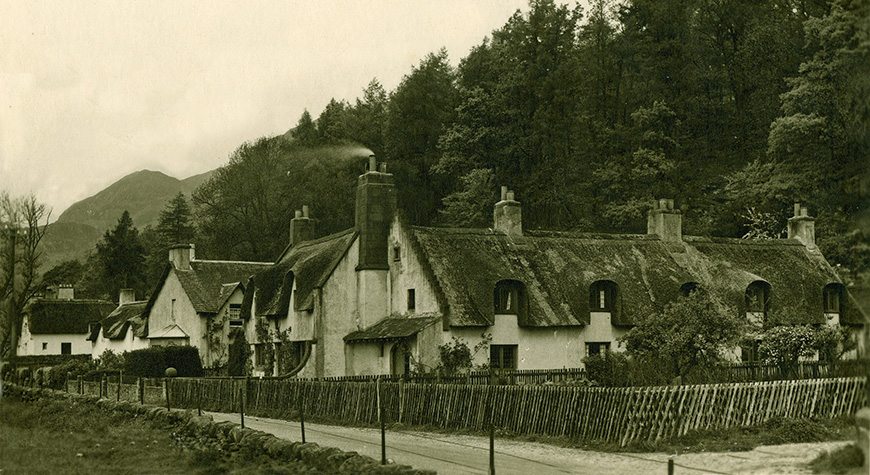 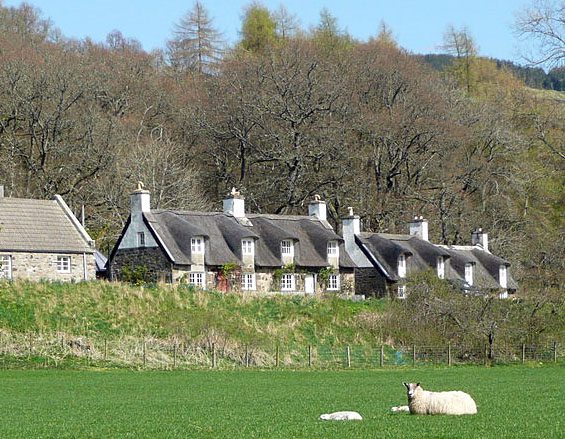 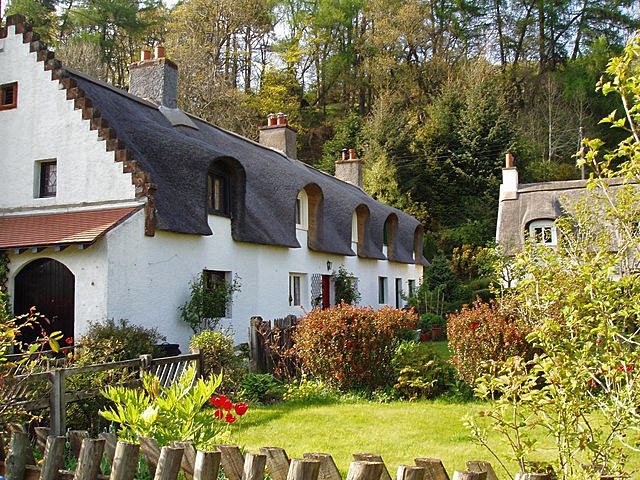 More Tay reeds… The original Tay reeds, for the cottages, in the upper pictures, at Fortingall, were hauled fifty miles up the Tay valley; over a century ago. Fortingall was built in 1890-91 by shipowner and MP, Sir Donald Currie, who bought the village in 1885.The thatched cottages are good examples of the ‘arts and crafts’ style. But hardly traditional for central Perthshire… Phots;copyright & thanks, Russell Wills & Ann Brennan.**

As noted above, some evidence of the stobbing method of thatching was found in the 1970’s roof, at Auchtermuchty. Further proof, in a more sinister fashion is found below; when the stobbing/stinging tool used hereabouts gets a mention…
‘’High Court of Justiciary 9th December 1793. This day came before the High Court… Robert Adam, thatcher in Auchtermuchty, indicted… for the crime of murder.’’ Robert it seems fell into an argument with one Thomas Greig, who with another, was taking furniture from the rear of the weaver John Michell’s cottage, in Auchtermuchty, ‘at about one in the morning’. And… ‘’did with a stinging board, or instrument used by thatchers in thatching, which he then had in his possession… strike the deceased… on the head’’. Another blow was then alleged to have taken been struck, resulting in Thomas’ death some time later. What Robert was doing wandering the streets with his thatching tool to hand and the reason for the nocturnal removals by his victim, has not come down to us.

However at the end of his Edinburgh trial, ‘the jury returned their verdict… not proven’. Thus Robert walked free; enjoying many more years in the craft. He appeared in a legal case once more in 1823, but this time as an expert witness. Being one of three craftsmen, stating building works at New Mugdrum were up to standard, including the work of David Laing the thatcher. Ref; The Edinburgh Magazine, or Literary Miscellany 1793 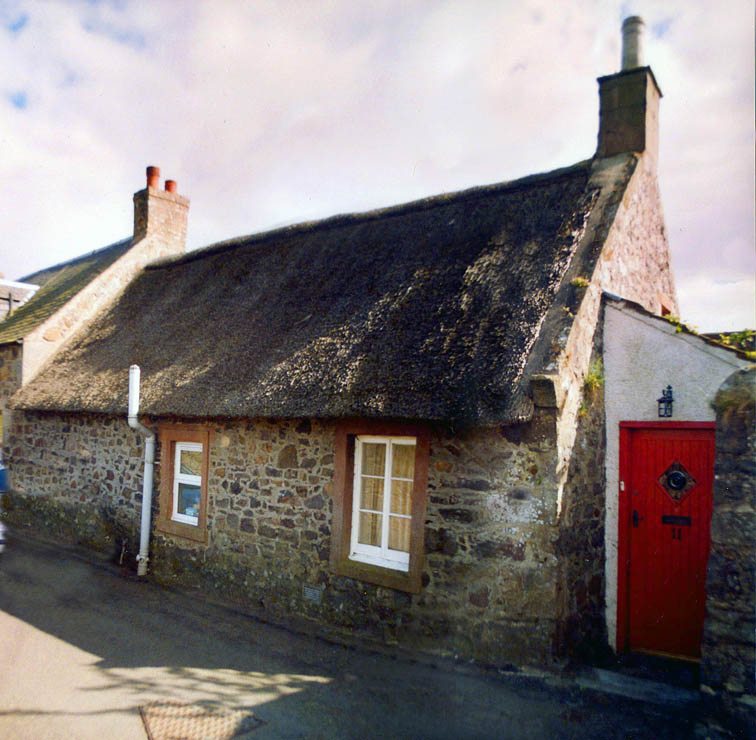 Auchtermuchty… Records held at the University of St Andrews, mention another thatcher from this Fife village; decades before the above court cases. James Cheape, Laird of nearby Rossie; paid one Robert Rankine ‘£10 Scots’ for 15 days thatching, along with his son. This sounds a lot but only worked out at just over a shilling, in sterling, a day… Thatch is still found here, shown above and below. Tay reeds are now used throughout, topped with a turf ridge. 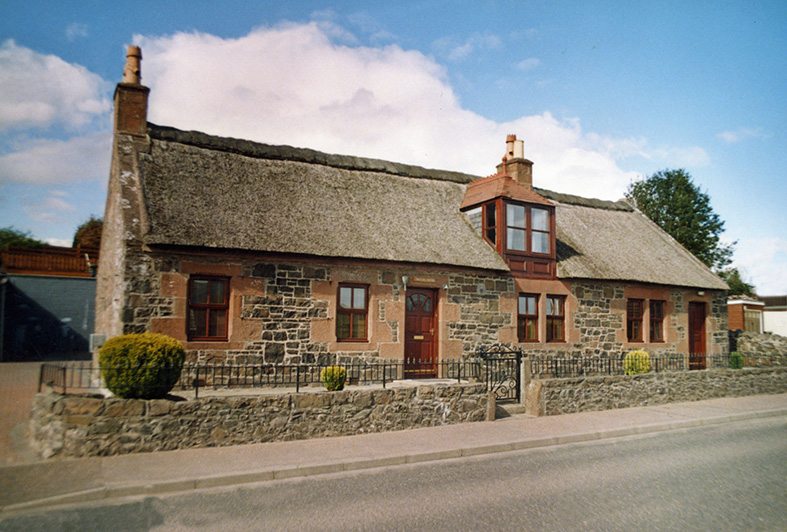 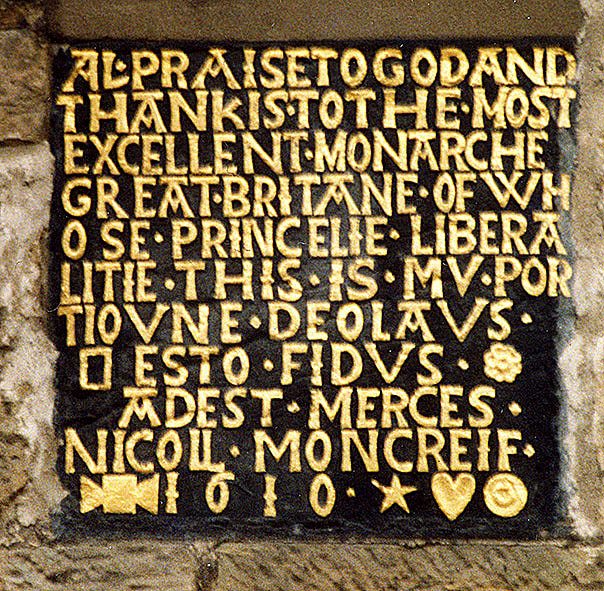 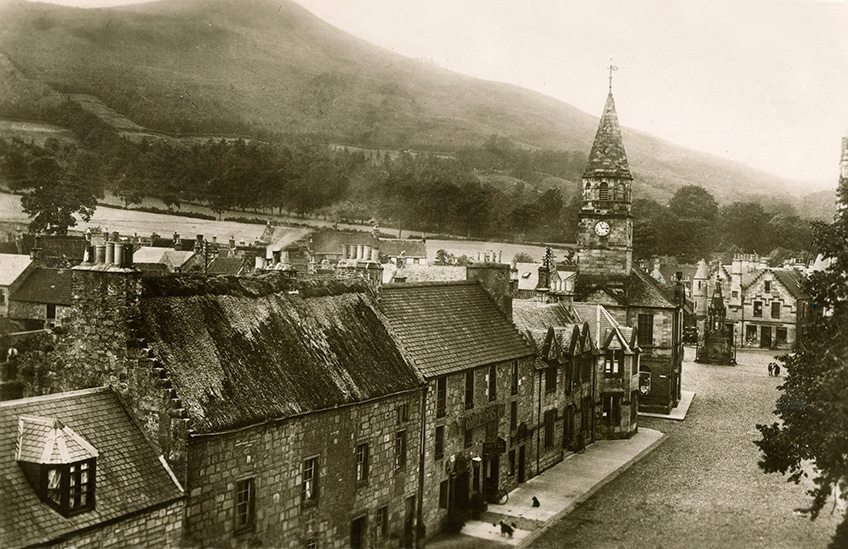 Falkland thatch… The tall thatched house on the left of this Edwardian photo, lies opposite the royal palace, in this Fife town. Still being covered with Tay reeds and topped with turf. As it’s splendid datestone shows, four centuries have passed since it was first thatched. 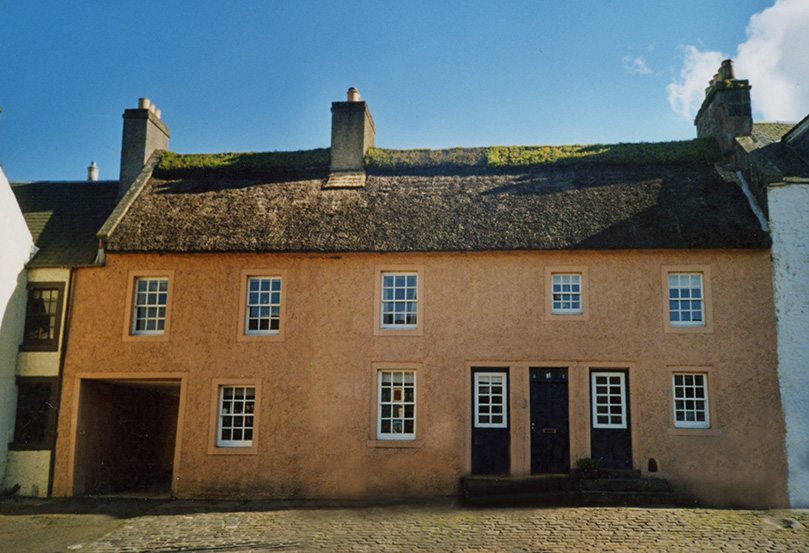 More tall thatch, topped with turf… Overlooking the Firth of Tay; at Newburgh in Fife. 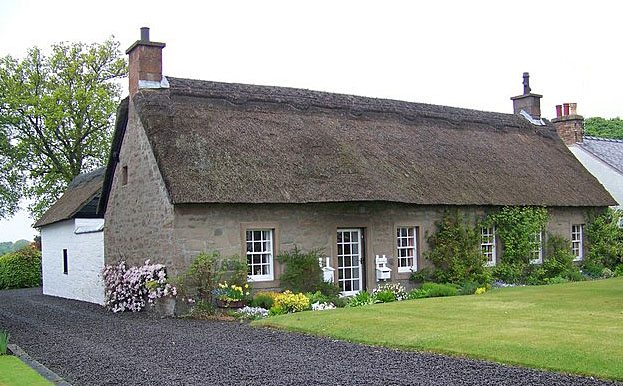 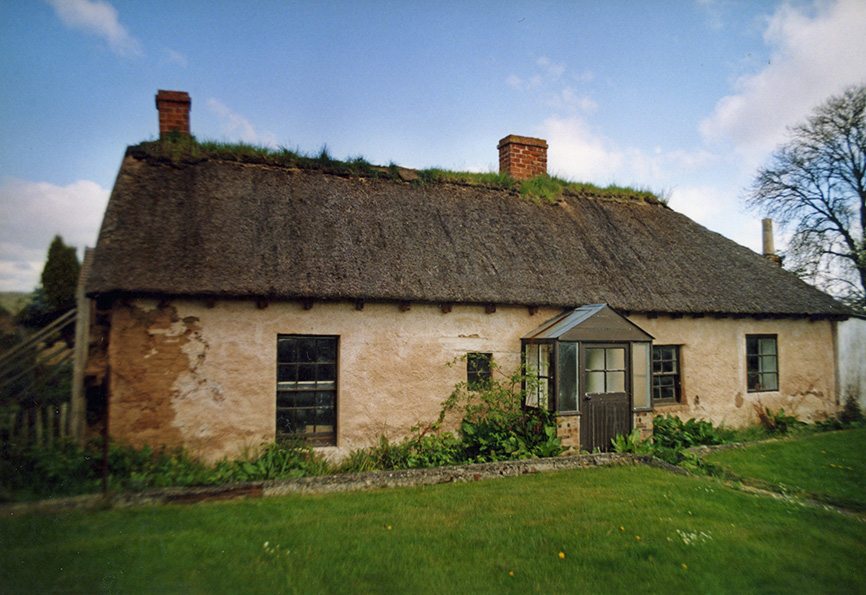 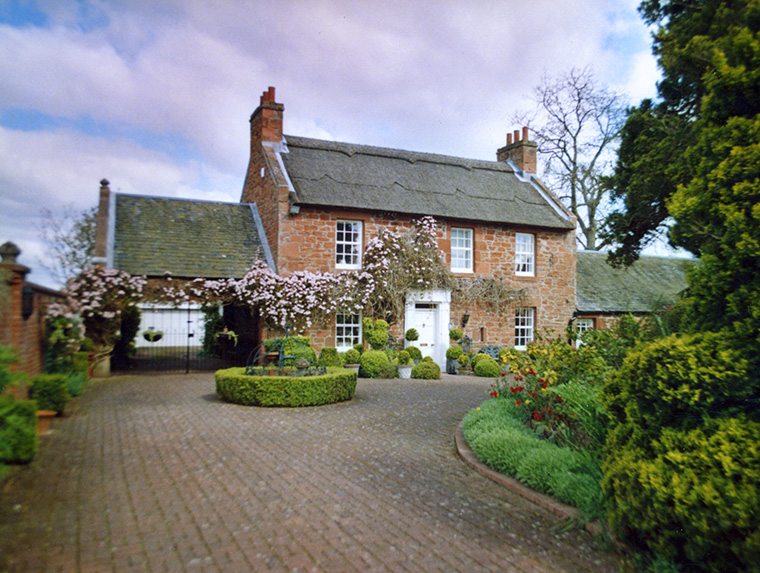 Four Perthshire thatches… The upper cottage lies in Stratmore at Kinrossie. Photo; copyright & thanks, ‘Maigheach-gheal’**. Left. The Old Schoolhouse, at Cottown, constructed between 1745 and 1770. A rare example of 18th century ‘muclwall’ (mudwall)construction; right on the banks of the Tay. Now redundant, but in the care of Scotland’s National Trust. The house on the right, at Bridge of Earn, is also coated with Tay reed. But there is no turf ridge; only a clever design in the coatwork and an ornamental ridge of straw. The lower image of around 1900, shows Tay reeds at Longforgan, in the Carse of Gowrie. 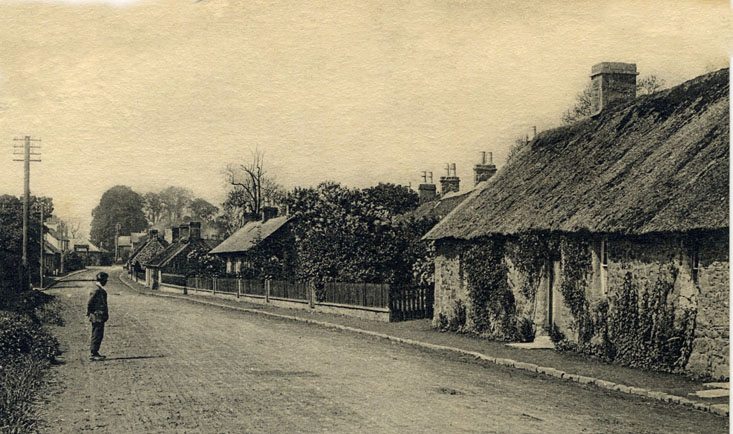 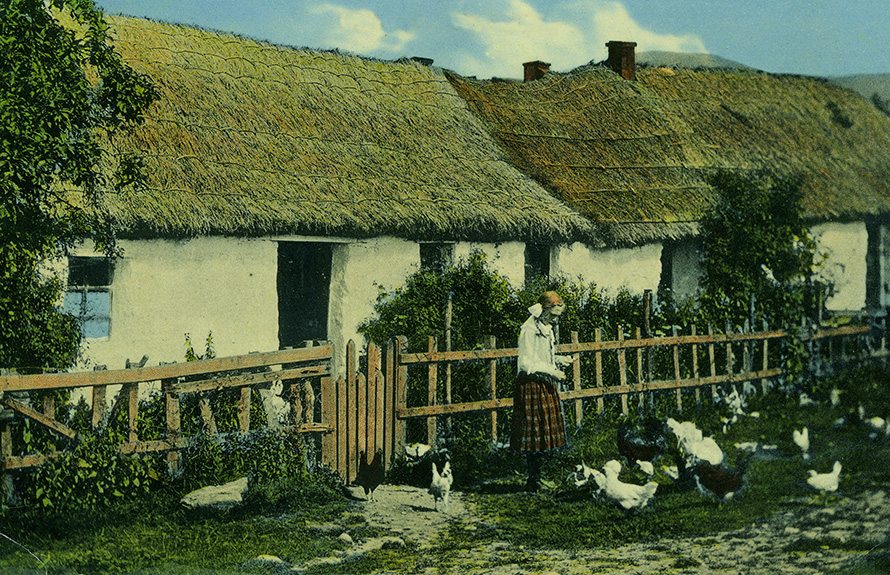 At last… Some Highland thatch. At Aberfoyle, once in Perthshire but now in Stirling. It seems the Northern Style had not reached these parts, a century ago; when this photo was taken. A close look will show some varying methods of fixing. The middle cottage has some crook and cabers, as well as normal spars and liggers holding the thatch. With the left hand thatch, being held by pointed, straight lengths of wood; with the ends being pushed in, on either side of a double handful of thatch. This being a rare method of fixing, in Britain… 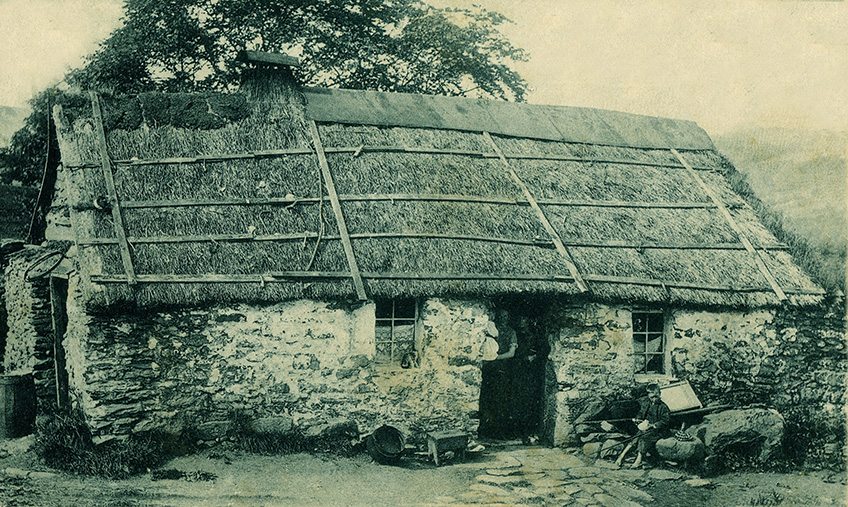 Caber framed thatch… At Duntaylor Aberfeldy, around 1900. In the Tay valley, but no water reeds here. The rigid caber frame, is keeping some straw thatch in place; with the odd large wooden crook, giving extra fixing.

‘Buchanan’s Cottage, Rannoch’… Is the title of this grainy image; the cottage shown was apparently , once the home of one Dugald Buchanan; the mid eighteenth century poet & writer. Who assisted the Rev. Stewart of Killin to translate the New Testament into Scottish Gaelic. He also helped develop, with the local laird, the village of Kinloch Rannoch; where this cottage once lay. The thatch consists of a crook and caber fixed roof, with a thatched lum; somewhat similar to the cottage shown above. Dugald’s cottage has disappeared but he has a memorial in the village… 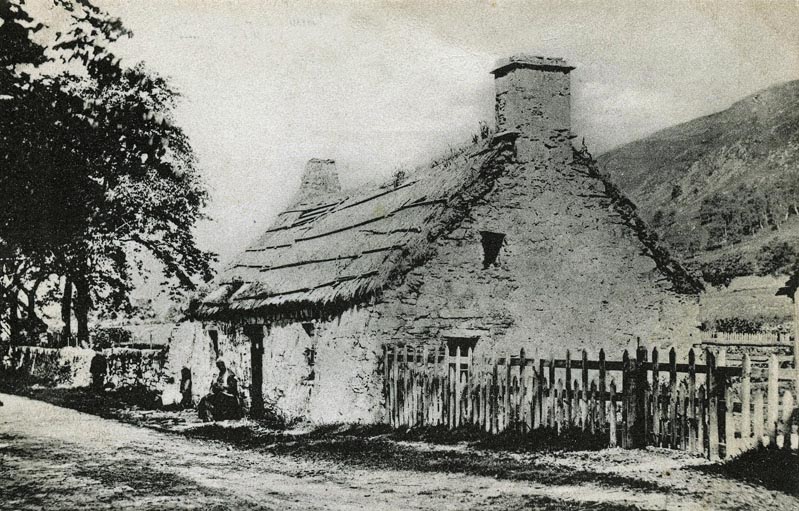 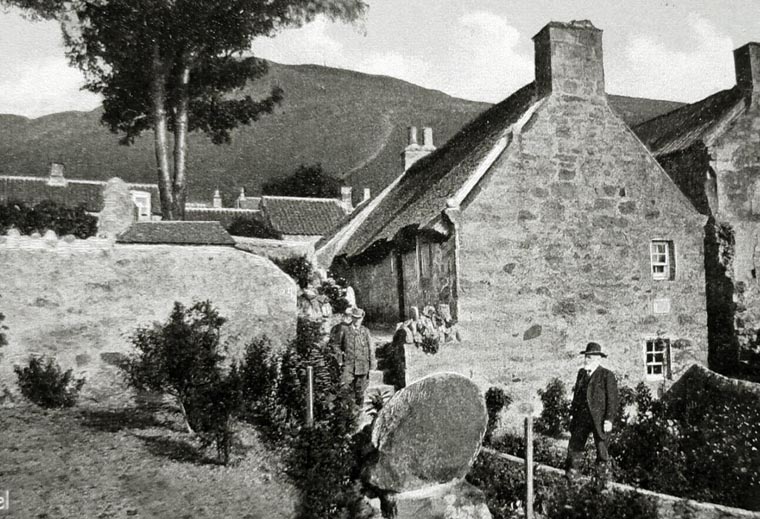 Tragic poet… The old weavers cottage on the left was the birthplace of another writer and poet, ‘The Gentle Poet of Loch Leven’; Michael Bruce; born in 1746, at Kinnesswood in the old county of Kinross-shire, and dead at 21… Passing away in his birthplace. His works include ‘Lochleven’ & ‘Ode to the Cuckoo’… ‘Thou hast no sorrow in thy song, No winter in thy year…’ The Edwardian image has Michael’s cottage coated in Tay Water reeds. Today the thatch has gone, but his home remains as a museum. 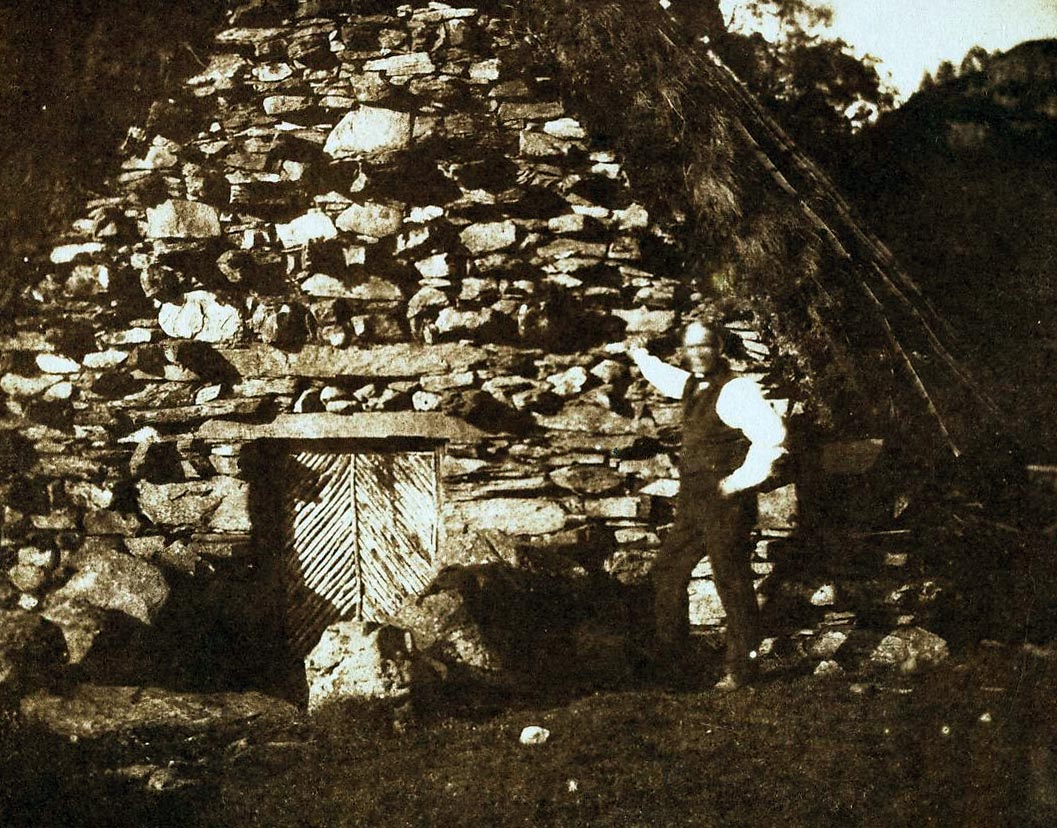 Early Cabers… Pioneer photographer William Henry Fox Talbot took some early photographs hereabouts, entitled ‘Scenery of Loch Katrine’. The one opposite was a named ‘A Highland Hut’. It dates to the same period as the St Andrews image above, being taken in 1844. Fifteen years before this Perthshire loch became a reservoir, for the expanding city of Glasgow. The thatching is difficult to see but is likely a rough coat of heather, being partly held in place by some Leaning Cabers. 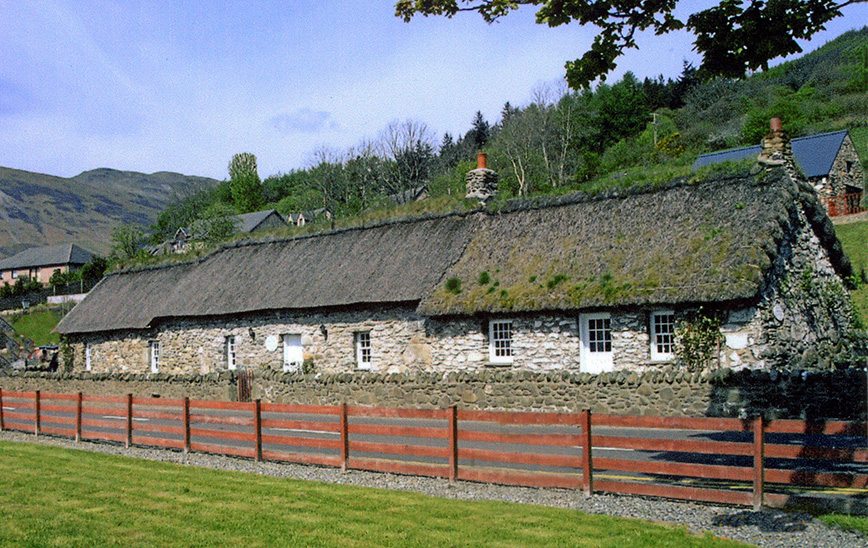 Moving thatch… At Lochearnhead, once in Perthshire, now in modern Stirling. This is one of the few remaining thatches, in this area. As ever, the Tay has provided the thatch, for the coatwork. The turf, for the ridge, being found closer to hand. An older image, from hereabouts is found below… 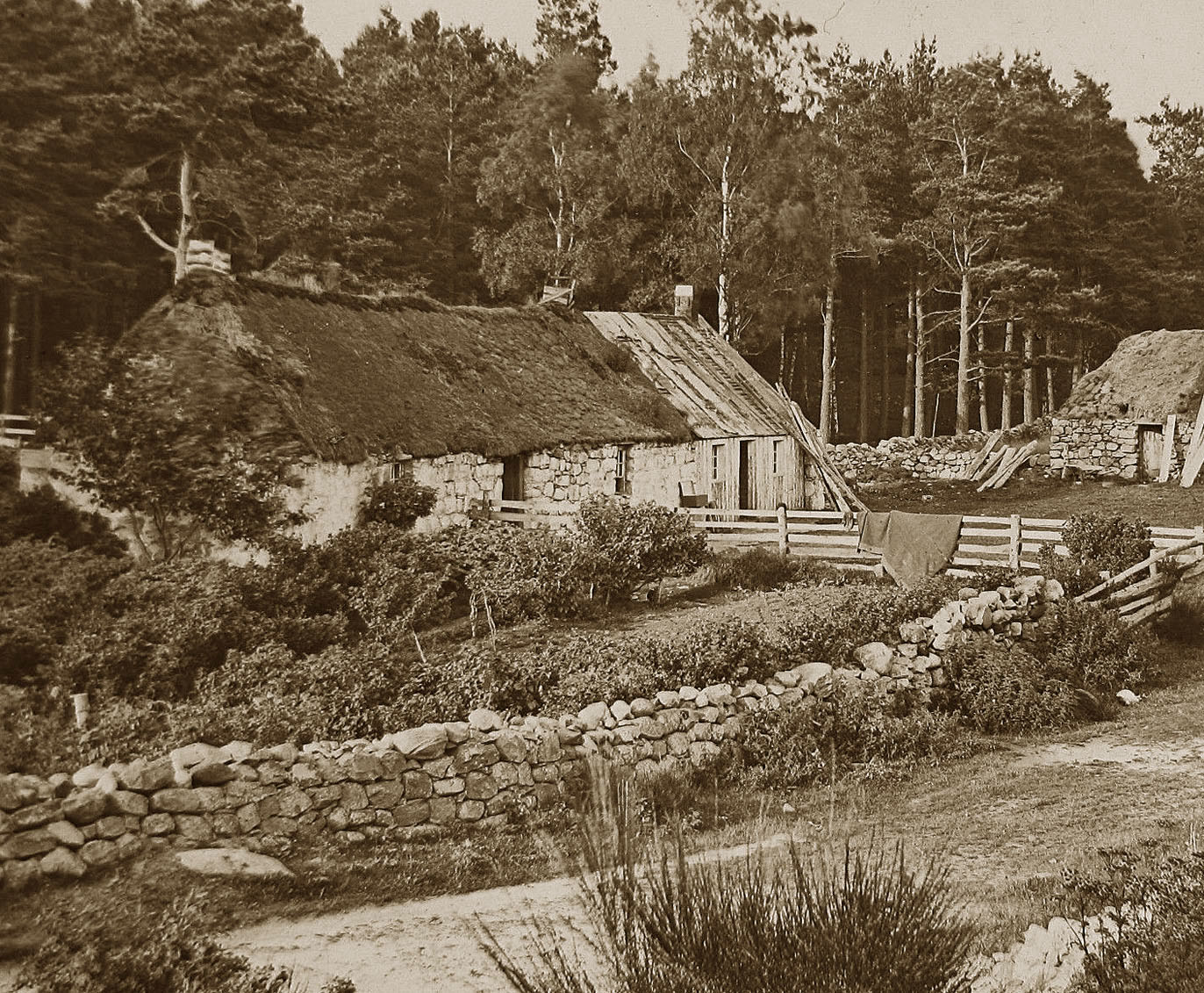 Above… ‘A cottage near Balmoral.’ From an old stereoview, depicting some Perthshire thatch, topped with turf… fit for a Queen? This image was taken by the prolific Aberdeen photographer, George Washington Wilson; invited by Queen Victoria to photograph the new royal estate at Balmoral, in 1854. This scene is a little later, dating to around 1880. As is the lower photo, by the same photographer; simply titled ‘Loch Earn’. It shows thatch, at the Western end of the loch, near or at Lochearnhead. Of interest is the layered thatch on the right hand cottage, topped with a standard straw ridge. The middle home has a few caber fixings, along with a ladder in the road. No doubt associated with some thatching… 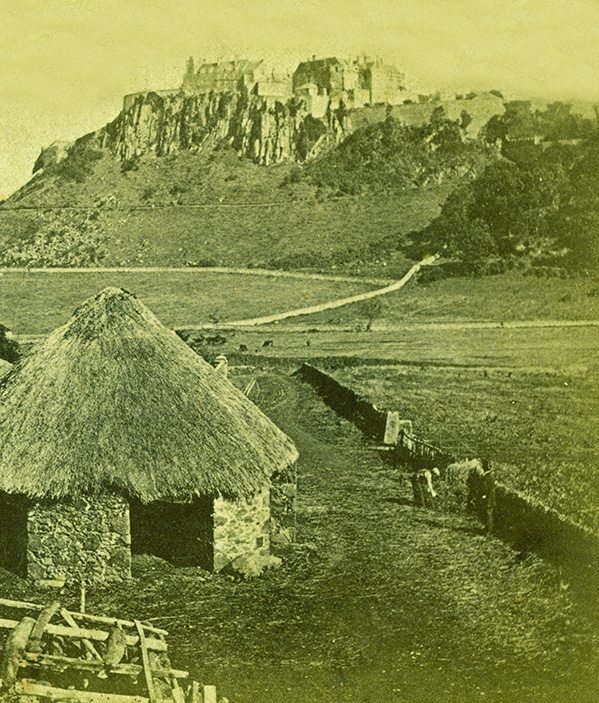 King’s Park, Stirling… Overlooked by the mighty castle. A careful look to the right of this image, will show a top hatted gent watching a thatcher, doing a little yealming. Unfortunately the photographer thought the castle a better view, than the thatcher working on the other side of this little building. But what they have shown is some untrimmed, new long straw thatching. 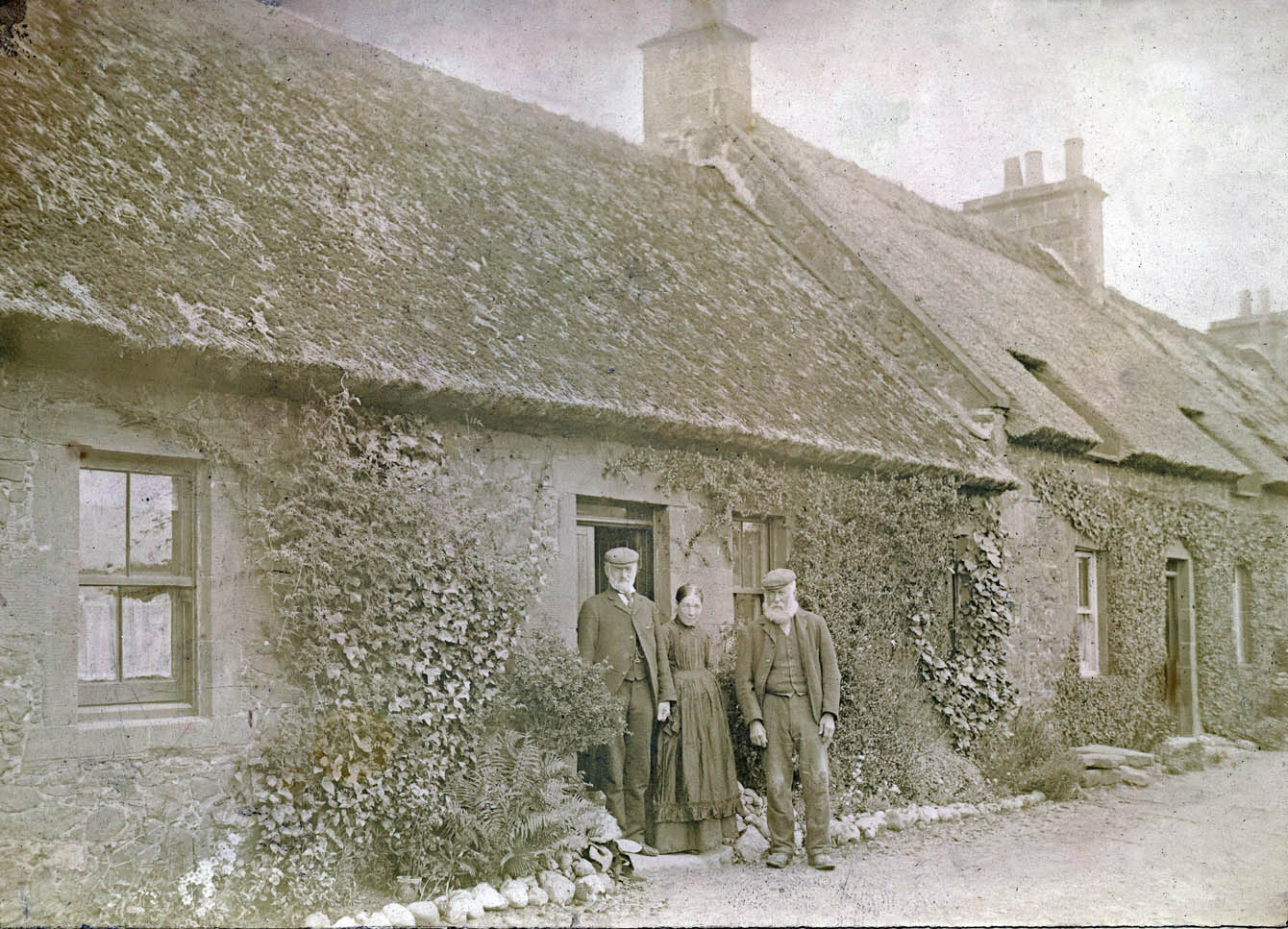 Tay reeds and Turf… A slightly later image perhaps, of some neat Tay water reed roofs; no doubt in Fife. As dipicted by the ‘Photo Company’ of Edinburgh. 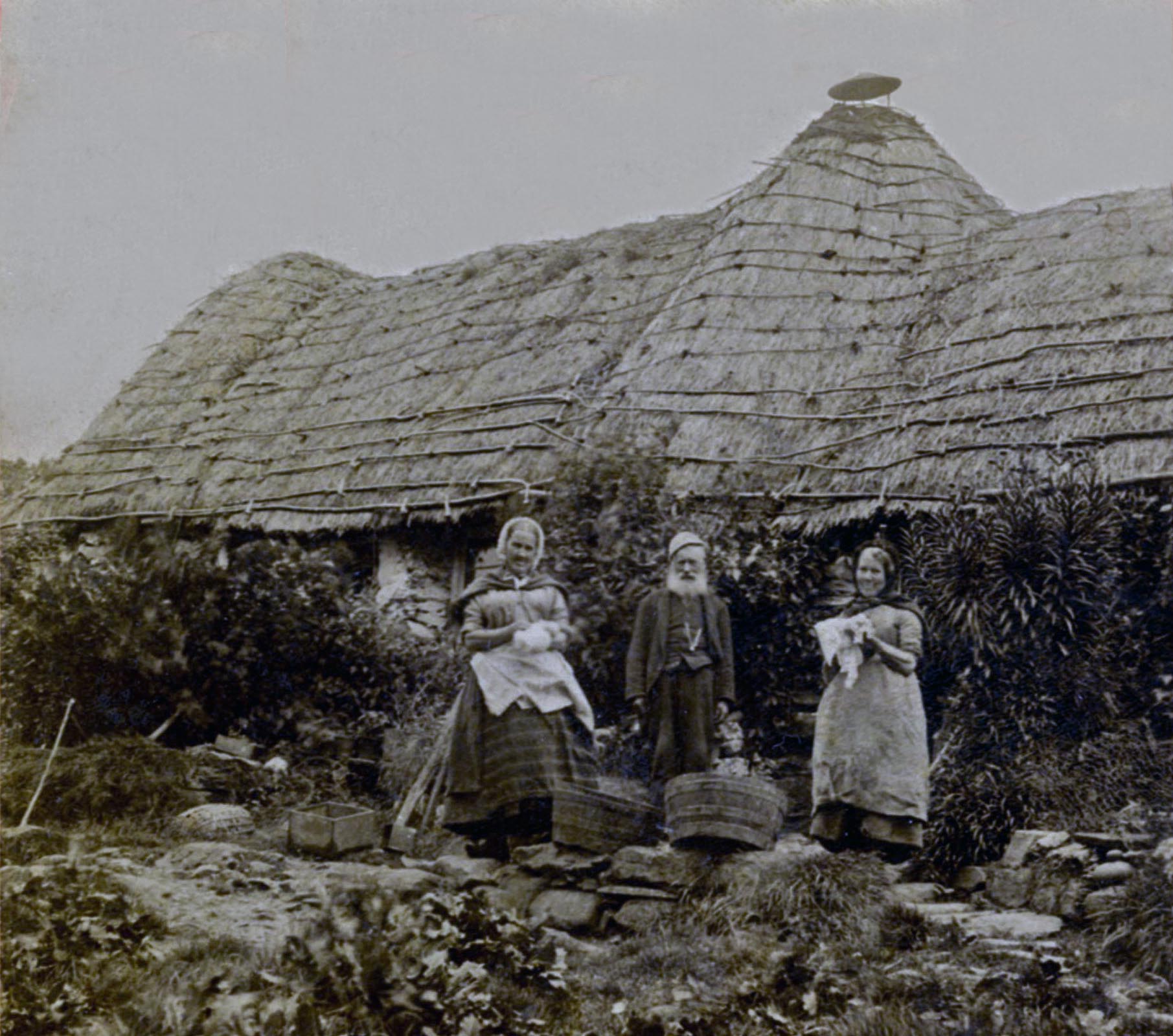 ”McFarland Cottage, 300 years old, Inversnald, Loch Lomond” This image shows a complete thatch, held in place with crook and caber fixings. Lying on the western side, of the old county of Stirling…

** Some of the new images, found on this page, were taken from the excellent Geograph site; licensed for reuse under Creative Commons. So thanks to all concerned, for allowing their images to be used…