Thatching in the Channel Islands

‘The islands on the coast of Normandy subject to the crown of Great Britain’. 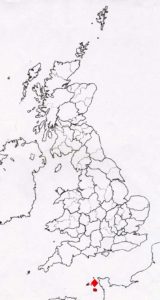 Guernsey, Jersey, Sark and Alderney, the four main Channel Islands; share a common thatching heritage. Amongst themselves and with their French neighbours; especially those in Brittany. But the four island’s thatching also have links to mainland Britain. Historically, thatching was a mixture of two traditions. The coatwork followed the combed, South Western style. But with gables and ridges, following the Northern. As has been mentioned in this section’s introduction, this could be a fusion of influences; dating from the Dark Age migrations. Combined with an historic lack of thatching materials… Today the islands still have a few thatches, and happily there has been a revival in the craft over the last few years. But until the late nineteenth century, thatch was the main roof covering hereabouts. 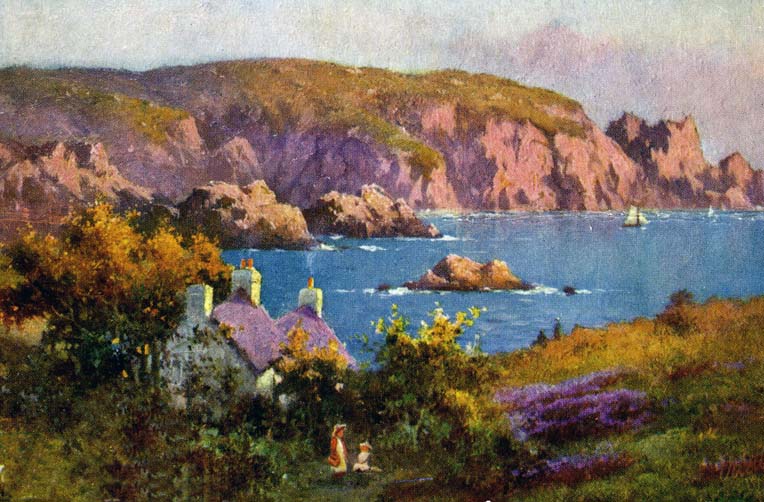 Moulin Huet Bay, Guernsey… The artist in this Edwardian image has shown some thatch, in an idyllic situation. A 1906 visitor to the island, noted a ‘great many’ thatched cottages near the coast. ‘Many however are being modernised or replaced’….

Historically more than one thatching material was used; ‘Grass’ being supplied, for works at Mont Orgueil castle on Jersey; in 1613 and 1635. This is almost certainly the marram grass, still found on the nearby coast. A little earlier, in the 1590’s, thatchers were employed, on Guernsey; ‘Repayring and fortifienge the southe parte of the Castle Cornett’. They worked for seven pence a day; the same as tilers and slaters. In 1610 more works were carried out at the castle; with sixteen shillings worth of reeds being purchased. This was for thatching the timber store house ‘it being all decayed’. Six shillings was paid for this work; the rate being a shilling day. But even by then, hand combed wheat reed was seemingly the dominant material. In the Jersey dialect, wheat straw is ‘glli’ or ‘glyi’. In Guernsey, thatch is ‘gllie’ or ‘gllic’; suggesting that they must have been one and the same, for a very long time… The fire risk, to urban thatch in 1683, forced the States of Guernsey to order ‘that no houses within the barriers of the town should be thatched or continue to be covered with thatch’ in St Peter Port. The worthies in Jersey’s St Helier followed in 1715. Around this time the Governor of Alderney also tried a ban. Not on the craft but on the annual springtime custom, of running through the streets with blazing straw ‘brandons’; this being a danger to the many thatched houses in St Anne’s. However the islanders took little note of the decree…. Years later, in 1770, it was noted that; ‘not withstanding the laws against this custom, the magistrates have not been able to eradicate it from the island.’ The townsfolk of St Helier were also rather lax, in following the official ban on thatching, as a 1833 guide states; ‘The houses are solid buildings of brick and stone… Thirty or forty years since, many of them, even in the principal streets, were covered with thatch.’ 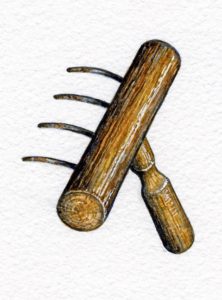 As with other areas using combed thatch, it’s neatness was admired. The Jersey writer Philippe Falle, stated with pride, in 1694; ‘France and England supply us with lime….; and the latter with blue slate… But this coming pretty dear, we must for the most part be contented with thatching; which is done with well chosen wheat straw, as little bruised as possible, laid on so artificially, bound so firm, and cut so smooth and even, that the work not only looks well to the eye, but will resist a storm of wind, better than I have observed common tyling to do in England’. Thomas Quayle, in his 1815 Agricultural Report, on ‘The islands on the coast of Normandy subject to the Crown of Great Britain’, was also impressed. He saw ‘thatch of excellent fabric’, obtained when only the ears of the wheat were thrashed. ‘Cleaning out’ then followed. Guernsey’s Folk Museum has a small hand comb, shown opposite, used in this process. Very similar to those once used in Devon and Somerset. It is also found in the Combed Wheat Reed  page, in the Materials section.

It seems from old photographs, that a traditional thatched roof, consisted of combed cereal thatch; usually tied on with straw or rushes; with stone gables acting as a wind break. The ridge was either of turf, or more usually, white loess; a clay common to all the islands, probably mixed with lime. Spars and other wooden fixings were sparingly used, due to a shortage of suitable timber. An historic problem faced by many island communities, over the whole length of Britain. As pantiles became readily available, they were used to form the eaves of many thatches, mainly on Sark and Guernsey, but not on Alderney. Here local traditions mention the overhanging thatched eaves; helping to dry cow dung, spread on the wall below. When removed, these ‘quiapeaux’ became a useful fuel, valuable in an island where wood is scarce… Gable ends, here and on the other islands always traditionally consisted of masonry. A few tiled buildings still have projecting stones on their gable ends. Hinting the past use of holding the thatch in place with ropes. Similar to work once found on The Isles of Scilly… More have large projecting drip stones around their chimneys; used to throw the rain away, from their former thatched roofs. The stones known locally as witches seats…

As pantiles became readily available, they were used to form the eaves of many thatches, mainly on Sark and Guernsey, but not on Alderney. Here local traditions mention the overhanging thatched eaves; helping to dry cow dung, spread on the wall below. When removed, these ‘quiapeaux’ became a useful fuel, valuable in an island where wood is scarce… Gable ends, here and on the other islands always traditionally consisted of masonry. A few tiled buildings still have projecting stones on their gable ends. Hinting the past use of holding the thatch in place with ropes. Similar to work once found on the Isles of Scilly… More have large projecting drip stones around their chimneys; used to throw the rain away, from their former thatched roofs. The stones known locally as witches seats… 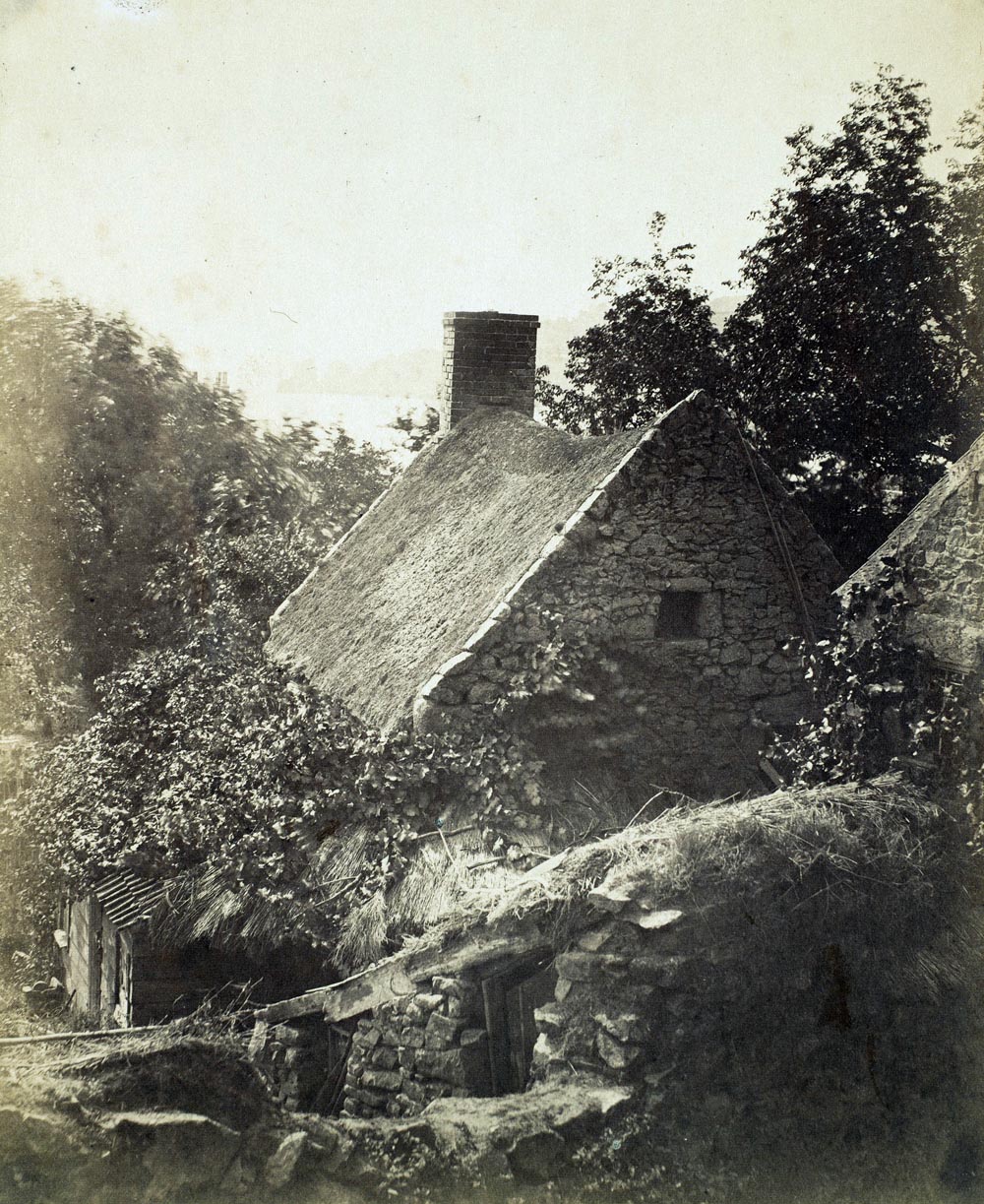 Typical… A very early photograph above, of a ‘Jersey Cottage’, dated 1855. This scene was captured by Joseph Crundell and shows a worn roof, with the clay ridge just visable, between stone gable ends. In the foreground, a small thatch roof seems to have seen better days, but shows us the horizontal rods used in tying on this old coatwork. 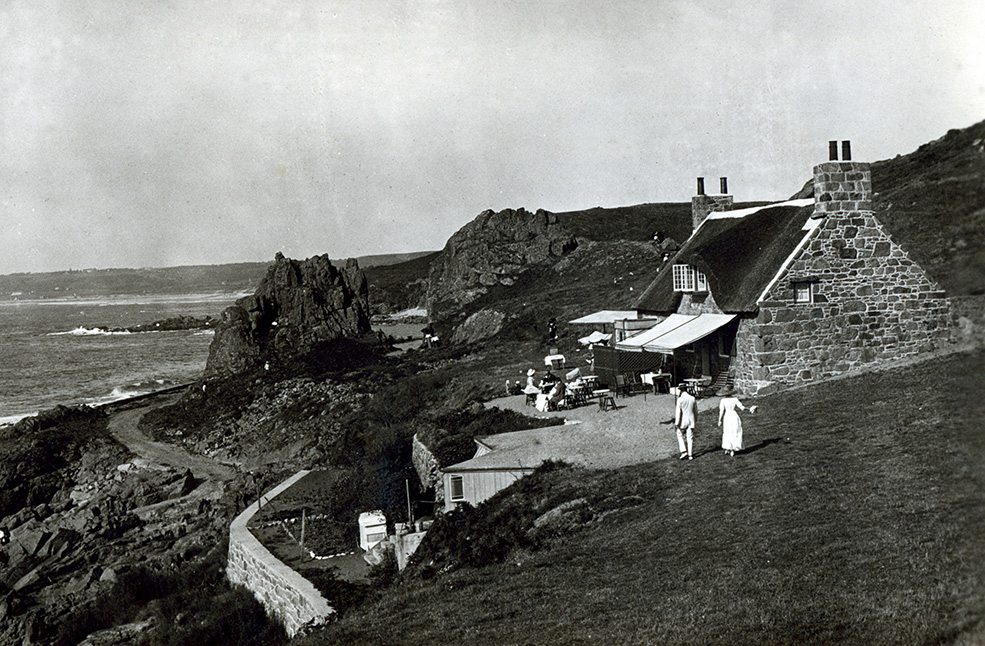 On Jersey… Above, a 1920’s tea rooms at Corbiere. With a new thatch and a shockingly white ‘loess’ ridge. Below is a modern roof in water reed, topped with a cut block straw ridge. 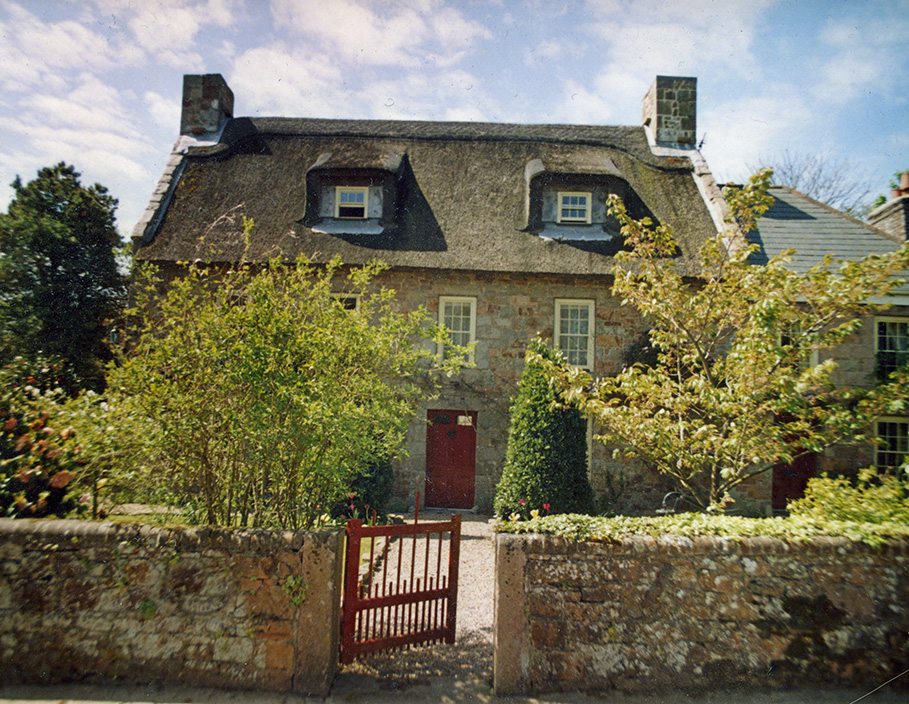 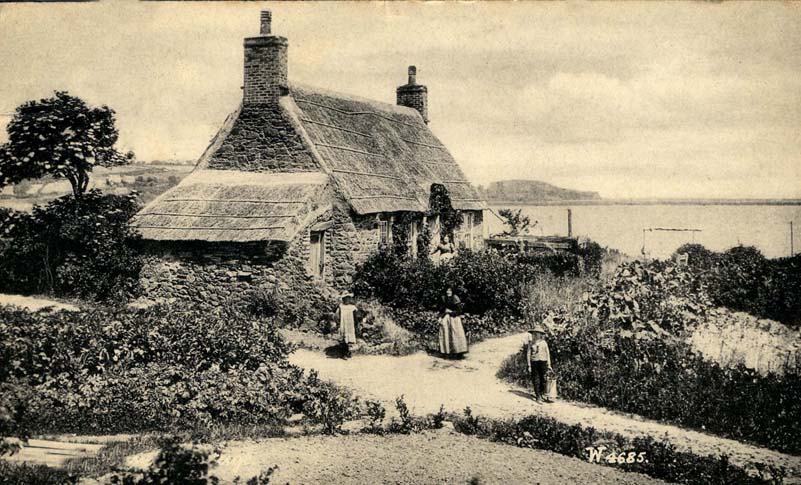 More Jersey thatch… Opposite, a late Victorian cottage at Archirondel. Showing some external timberwork, added as extra wind protection. Below is the same property from a little later; now serving as ‘Perrier’s Tearooms’. The lean to has lost its thatch; with the main roof sporting a new coat of combed reed… 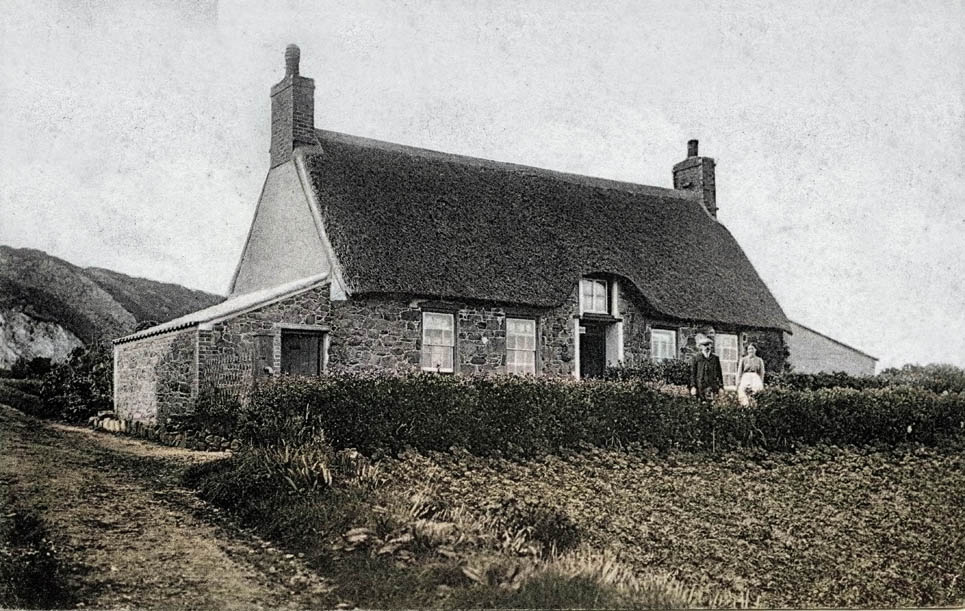 On the right is the island’s folk museum at Hamptonne; coated in water reed. Below is ‘Verdon House’; showing some typical Jersey, Edwardian combed thatch, topped with a clay/mortar ridge… 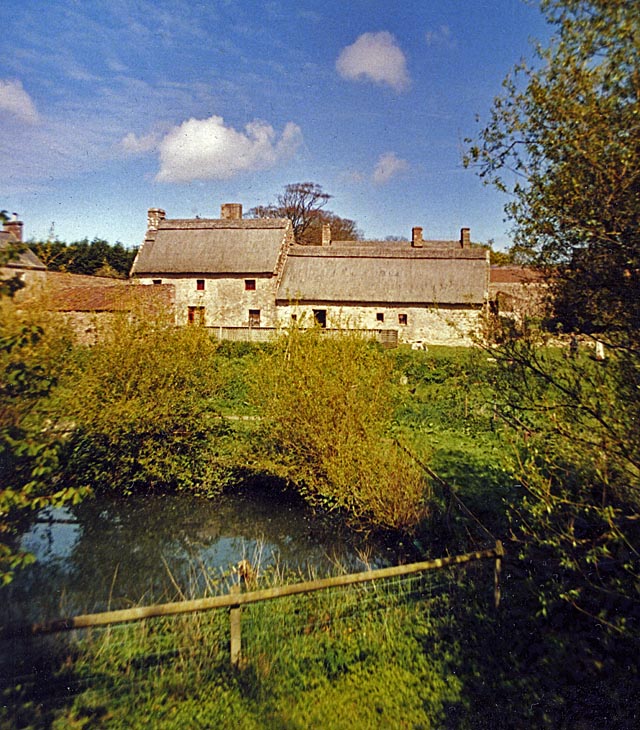 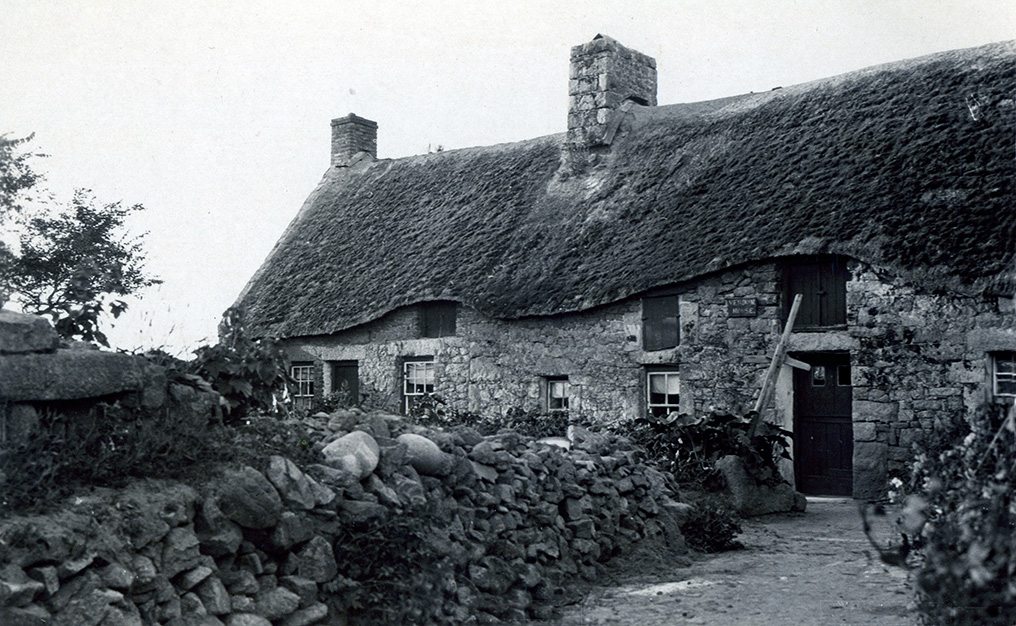 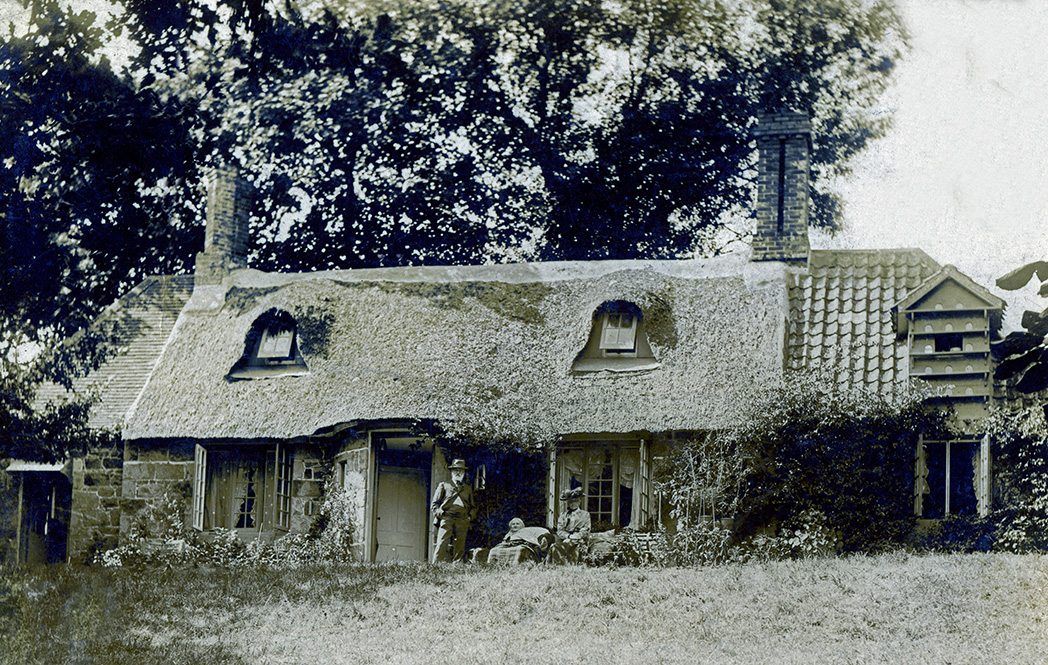 On Guernsey… Above, a prosperous Edwardian scene, at St George’s. Again showing typical combed thatch, with a clay/ mortar ridge. As does the remote ‘Fishermans Cottage’ below… 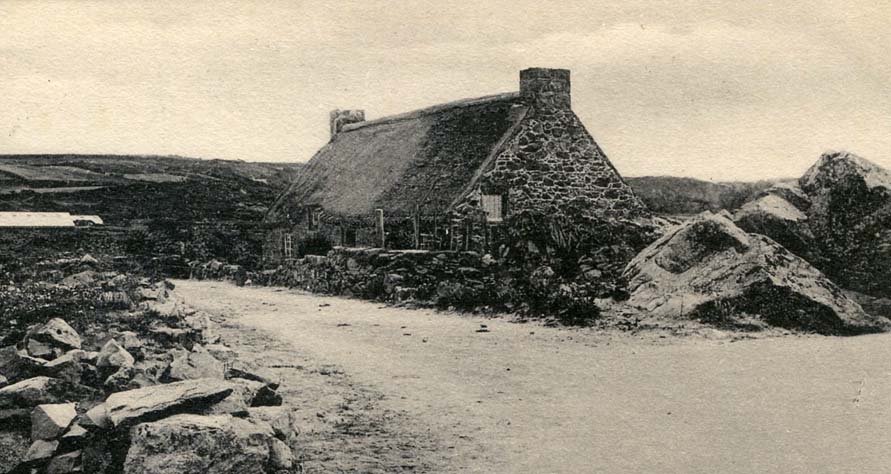 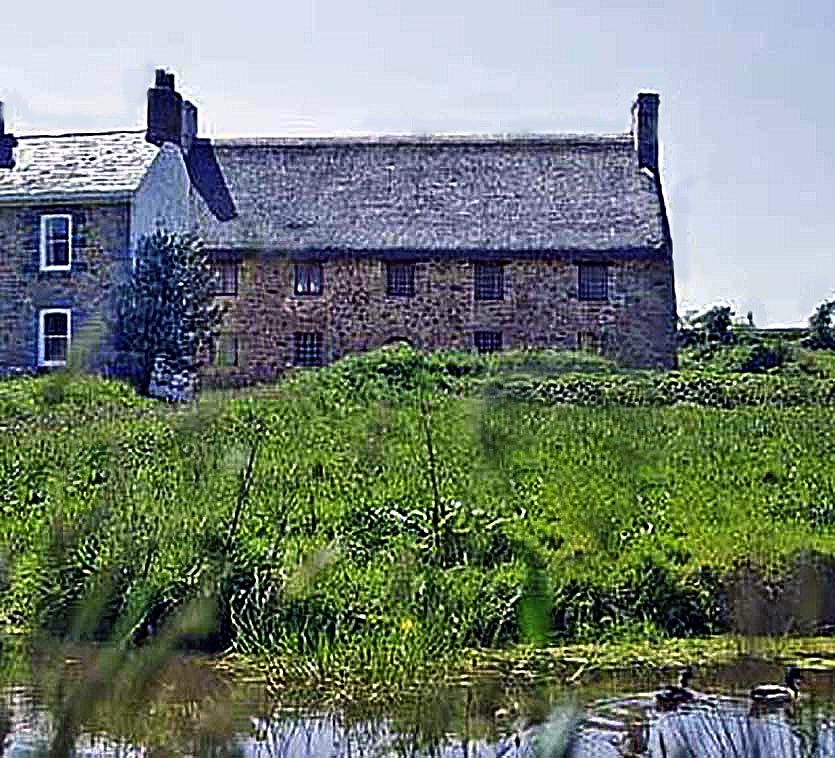 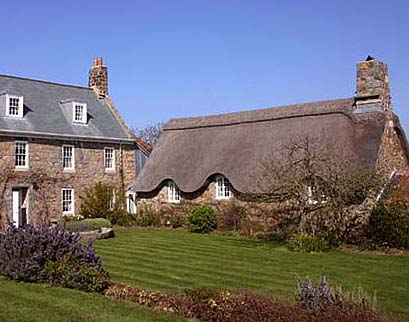 The left hand image shows the restored thatch at Les Caches Barn. A property in the care of the National Trust for Guernsey. The image above shows modern water reed work, in St Martin’s Parish. 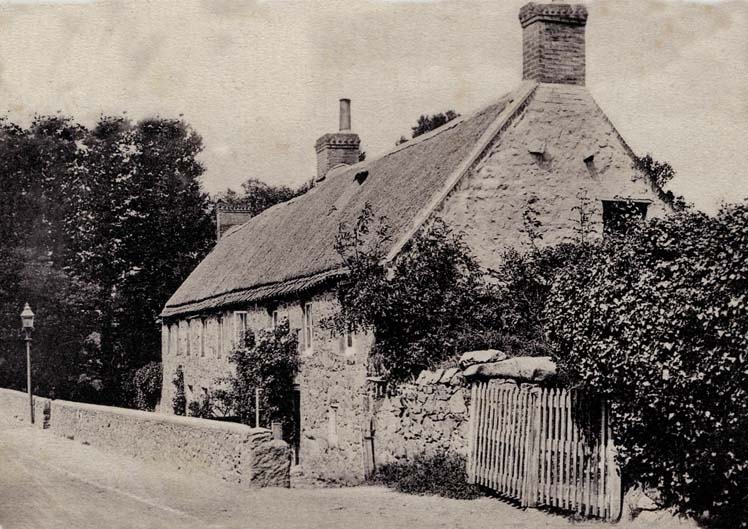 Old Guernsey Cottage… This late Victorian scene, once more shows combed thatch and clay /mortar thatching. Along with some projecting stones in the gable end. Which may, at an earlier time, have been used to anchor a external rope fixing, to the thatch. Also pantiles make up the eaves. A feature often found in old images of Sark… 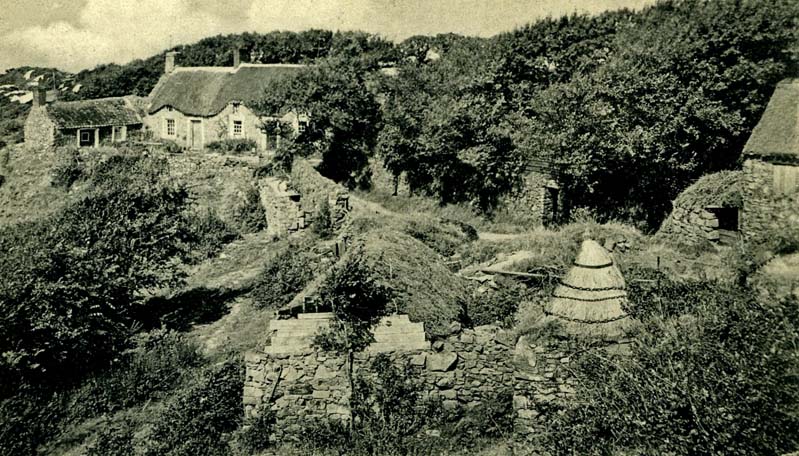 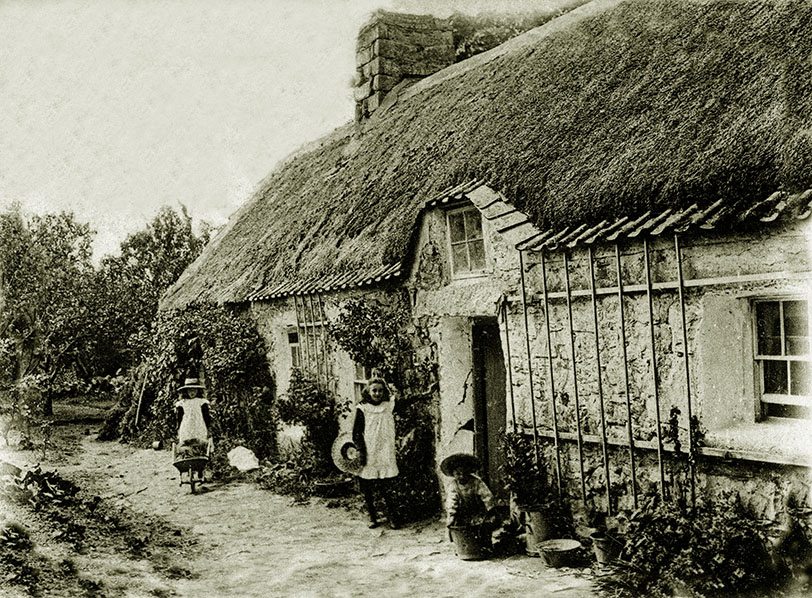 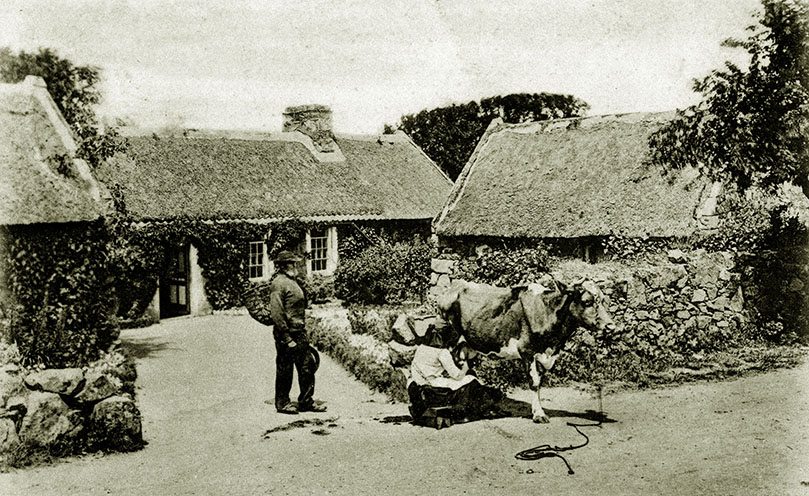 The attentive reader will have noted that there are no images from Alderney. The harsh conditions imposed here during the Second World War, seemingly removed all thatch; and any visual record of the craft…

Finally, back to the Witches Seats…

Tile and slate roofs, being much thinner than thatch, have left these protruding drip stones a little way up the chimney, on many old Channel Island homes. Showing the former widespread use of thatch.

When the folk tales regarding these stones started is not known; but it seems wise to have your cottage protected with them. As a witch returning from a coven may wish to rest here. Failing to find a suitable seat, she could well slip down the chimney and cast a spell or two… 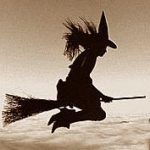 But help is at hand if this should occur; spells can be broken; by stealing some thatch from the witch’s roof, and burning it in front of the spellbound person. (As described, in the page covering Flintshire .)

This belief was widespread, and in the 1657 Flintshire case, seems to have been effective. A useful trick to remember; you never know when it might come in handy…