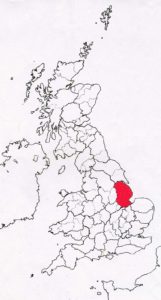 Thatch in this large, historic county is not that easy to find; having less than five per cent, of the amount found in equally sized Devon. Modern roofs mainly follow the Eastern style, as they do over much of the Northern area. But old images, of mortar, turf and tiled ridges, illustrate this county’s true Northern thatching ancestry… In 1350, the tenant of a farm at Roxholme, had to provide ‘30 hens, 400 sheaves of straw for thatching houses; and 4 ‘kirves’ of turf’; as part of their rent.

Both long straw and water reed are used here. Unlike many areas of Britain, this has always been so. The Georgian Agricultural Reporter saw thatchers using both materials; with the straw of wheat or rye. Mr Young also noted that in 1813, a week’s work could earn a thatcher, at Tathwell near Louth; ten shillings and sixpence. With all meals and beer provided…

Alford thatch… This attractive town has a fair amount, including this pleasant group. Dating from the sixteenth and seventeenth centuries. The younger ones being double storied. A roof opposite is ridged with tiles, in the Northern thatching tradition… In 1568 one William Marshall was prosecuted, for ‘bringing a lighted “squybb” into the town of Alford among thatched houses’.

A century ago, Charles Innocent the Sheffield architect and writer, noted that the north country term Thack, was used to describe the various plants, growing in the drainage ditches, in the: ‘sea marsh’ area of the county. Hinting at an even wider range of thatching materials in the past. No doubt all fixed firmly with thatching spars; known here as speets. Today thatched roofs are thinly scattered, the districts around Horncastle and Alford having most to show… 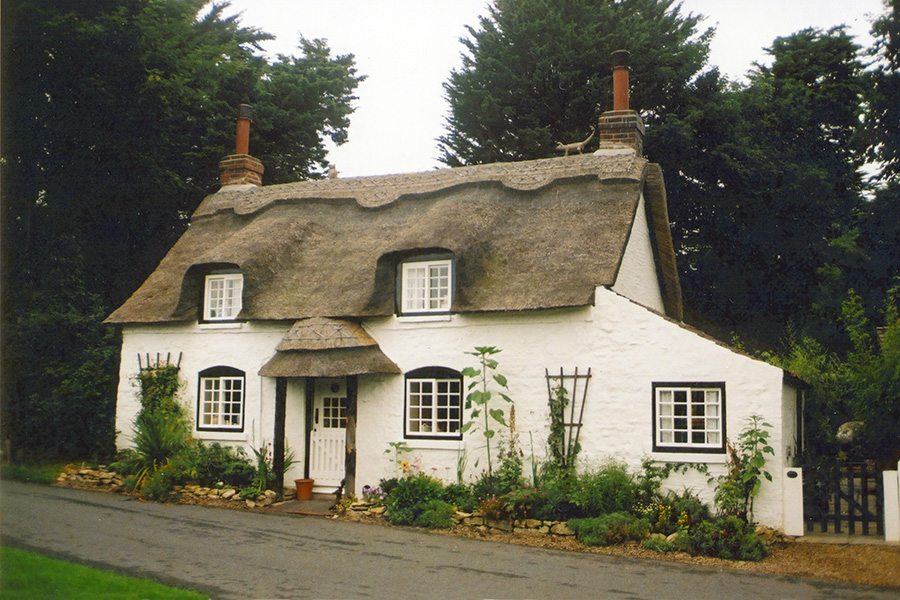 Riverside thatch… The upper cottage lies in Appleby, just a short distance from the Humber. The lower thatch once graced the village of Owston Ferry. Which lies on the Trent. A turf ridge topping this roof, a century ago. 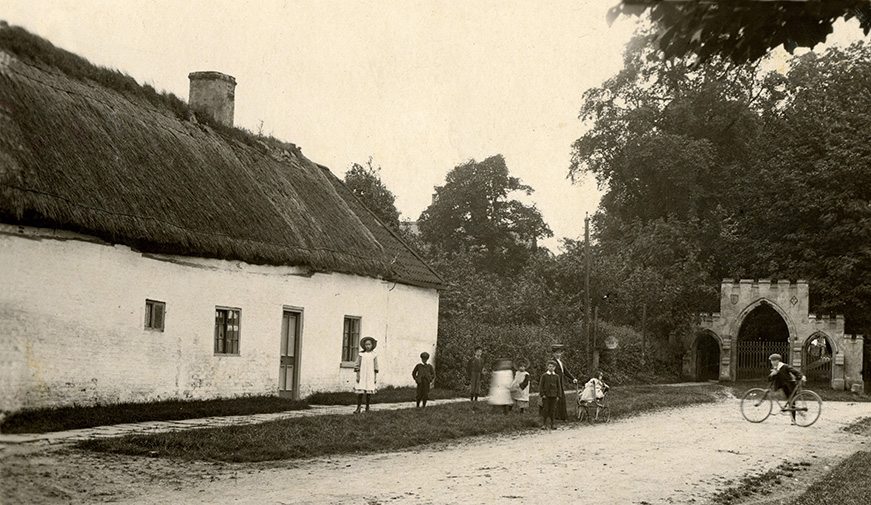 The oldest image of a thatching tool is of a legget… Found buried, in a manorial court roll, from Crowle in the northern part of the county; not far from Appleby and Owston Ferry. The court roll was complied for the year 1364; the sketch is easily identified, as a splendid if tiny drawing of a water reed legget. Thatchers over most of Britain use similar tools today… The surrounding text does not mention the craft, so the reason for the scribes 2 inch (50mm) doodle remains obscure… Crowle is situated on the Isle of Axholme, giving a clue to its watery past. The rivers Don and Trent surely provided an abundance of water reeds, in former times. Crowle image courtesy of Lincolnshire Archives (copyright holders) 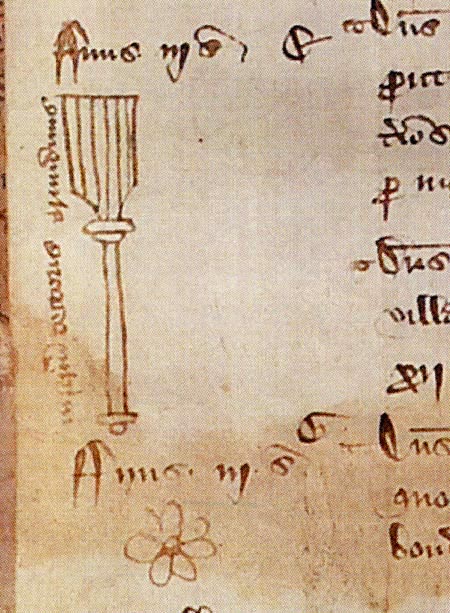 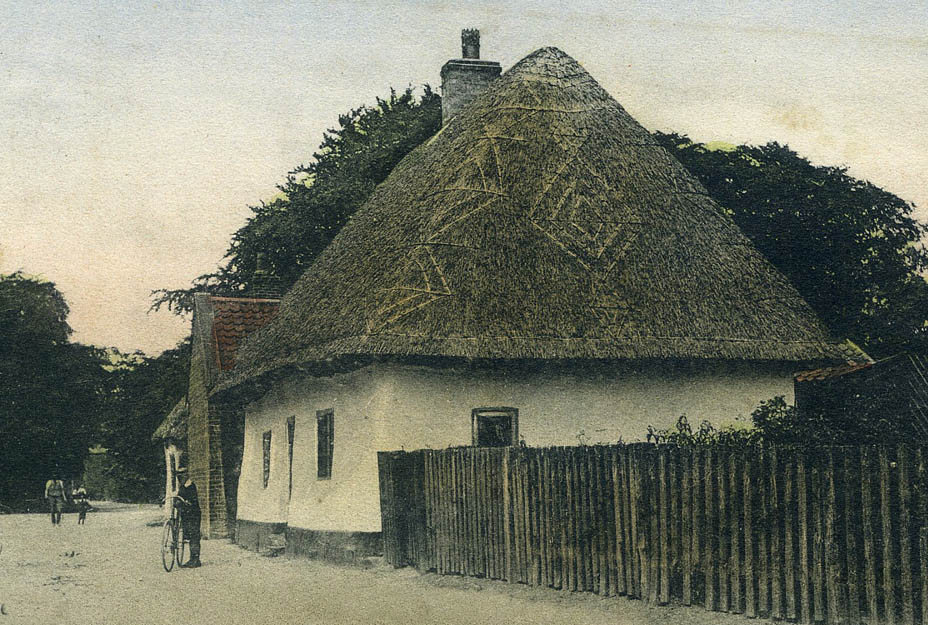 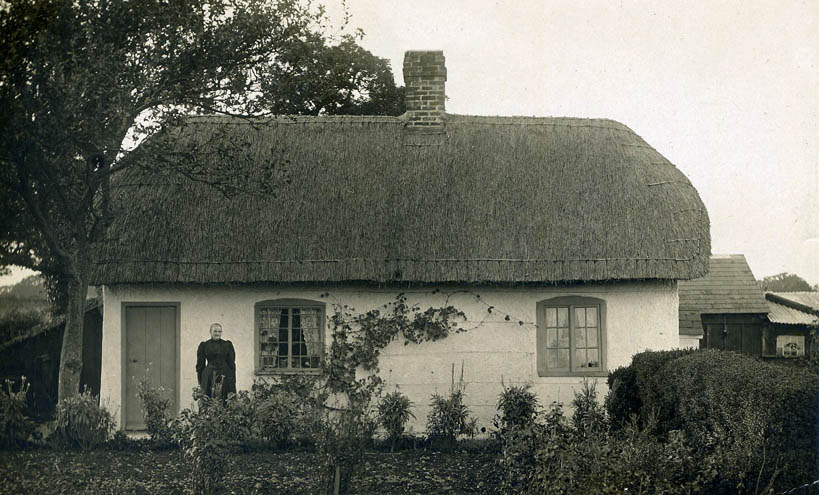 Fancy & Plain… These old images show long straw thatch, in north east Lincolnshire, around 1900. The thatcher who worked on the right hand cottage at Keelby, finished with some clever spar work . But the finish, of the left hand cottage at Goxhill, could not be simpler… 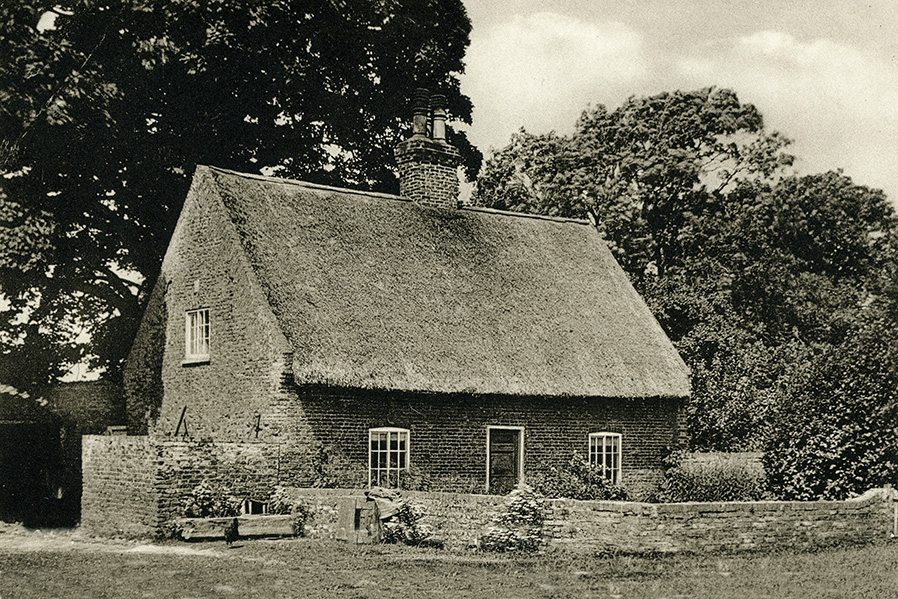 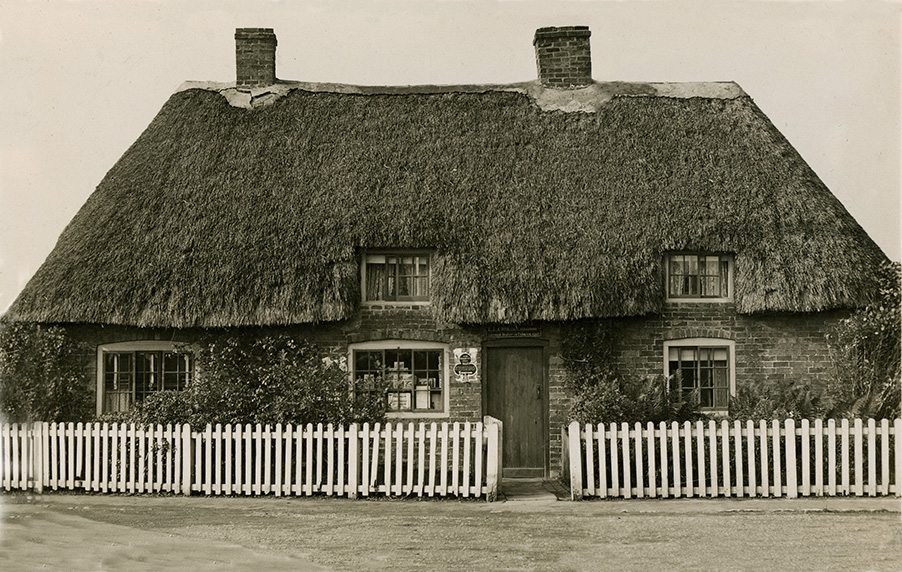 Tiles and mortar… The left thatch, at North Cotes shows a tiled ridge; which protected a coat of water reed or possibly Marram grass. Either could have been cut, in the nearby coastal mashes, possibly one of the types of ‘Thack’ mentioned by Charles Innocent. This roof being contemporary, with the travelling architect. The Post Office, on the right, at West Rasen, has a long straw thatch, under a mortar ridge. Dating from around 1925 and happily still thatched today. But now ridged with straw… 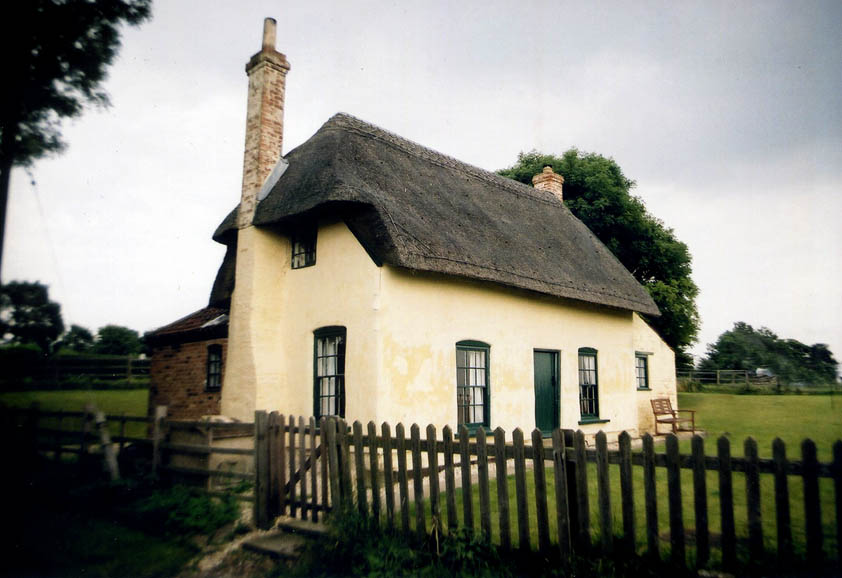 Long Straw… In a angular style, at Baumber and a round ‘Cottage Orne’ thatch at Langton by Spilsby. 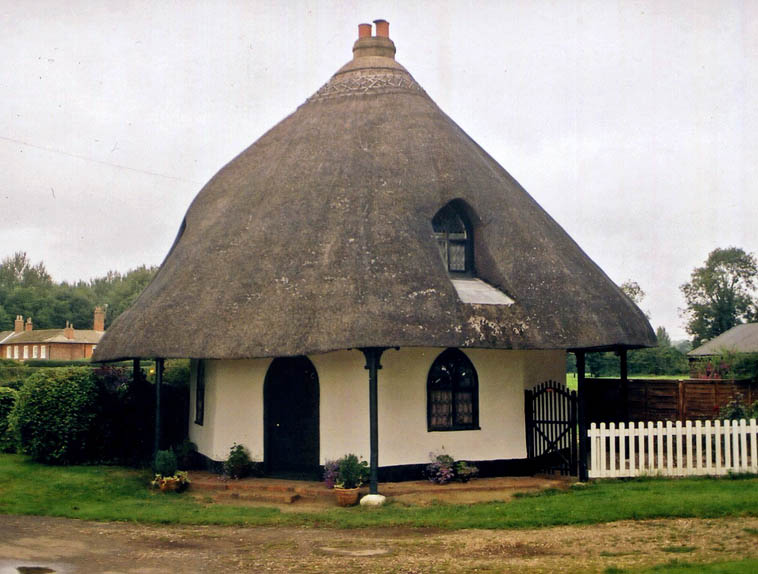 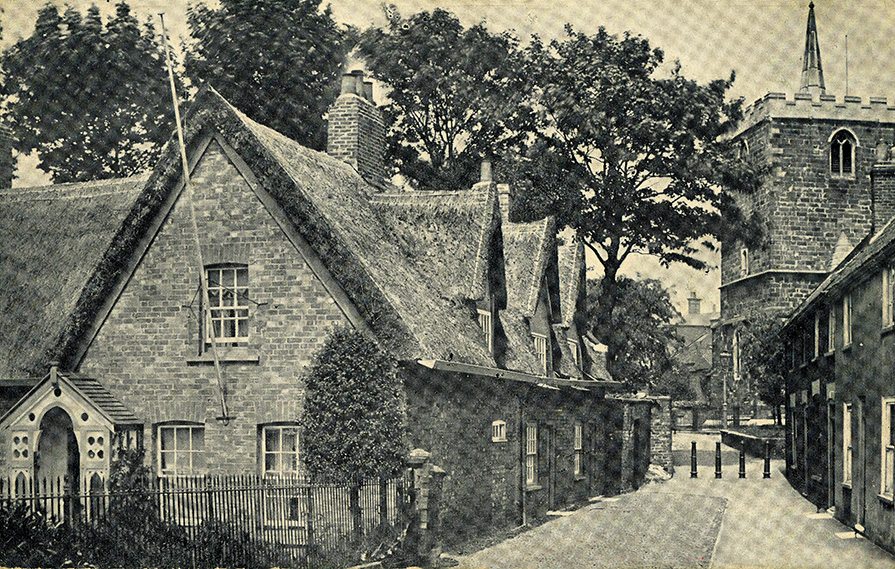 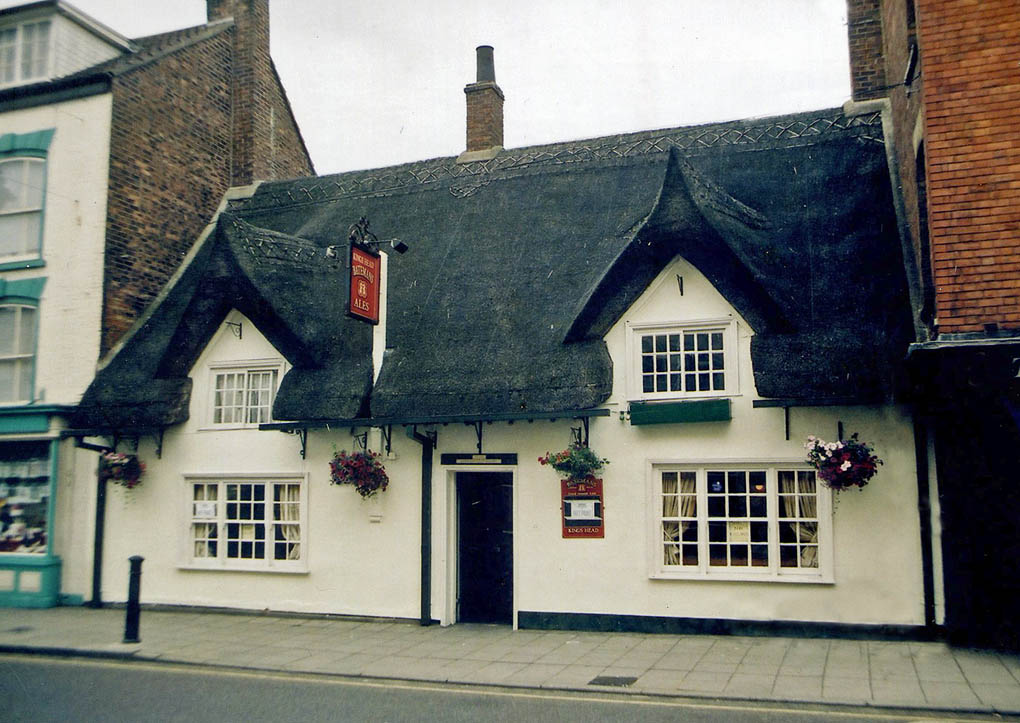 Horncastle…  The Edwardian view of Horncastle, shows long straw thatching, in an somewhat eastern style. With it’s distinctive gable ends being much in evidence. This attractive scene is very much the same today, with more thatch scattered throughout the town. Including The Kings Head pub… 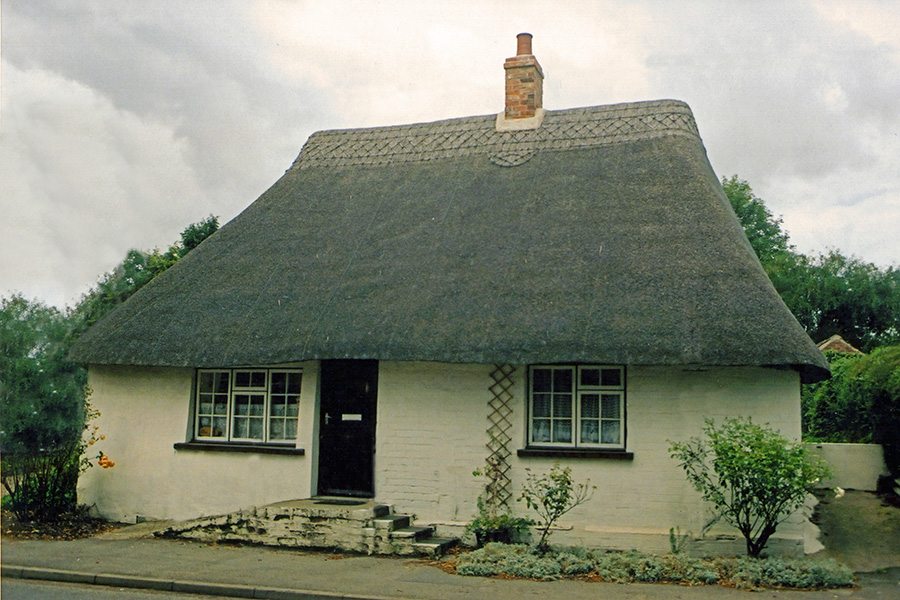 Tiny cottage… In Thimbleby. It seems some of the first buildings, erected in colonial Virginia, were similar to ones hereabouts. Many of the immigrants, in 1607 Jamestown, hailed from this area… 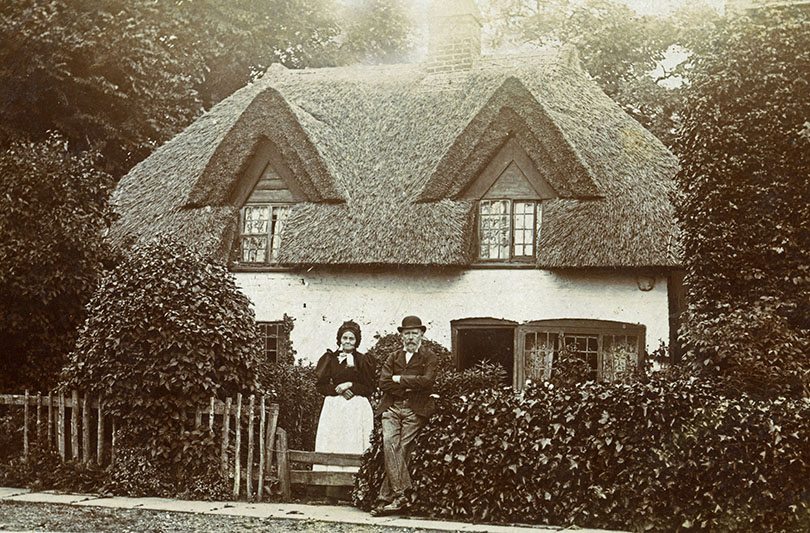 Proud as punch… Happy thatchowners, with a new roof to admire, possibly of sedge grass. But all those nearby trees, could have caused problems later on, for this Edwardian couple; at Friskney, near Boston 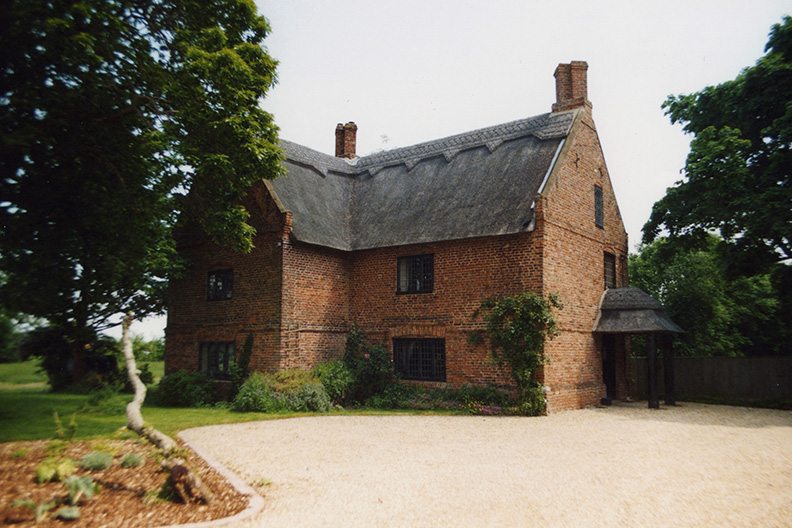 Much grander… Is the large seventeenth century thatch, near Gosberton.

Wanted, Lincolnshire Thatcher … Joseph’s alleged crime isn’t mentioned. And it seems he had already had a free trip to Australia some years before! Perhaps he should have stayed there… 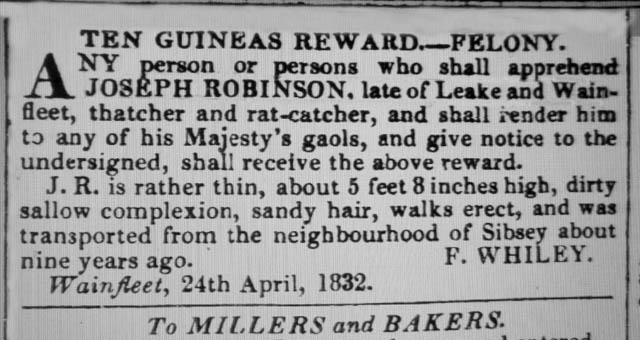 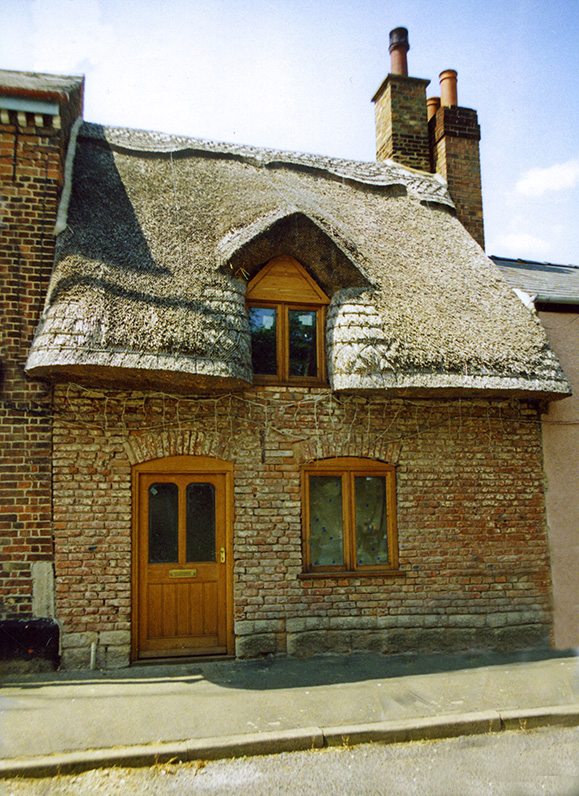 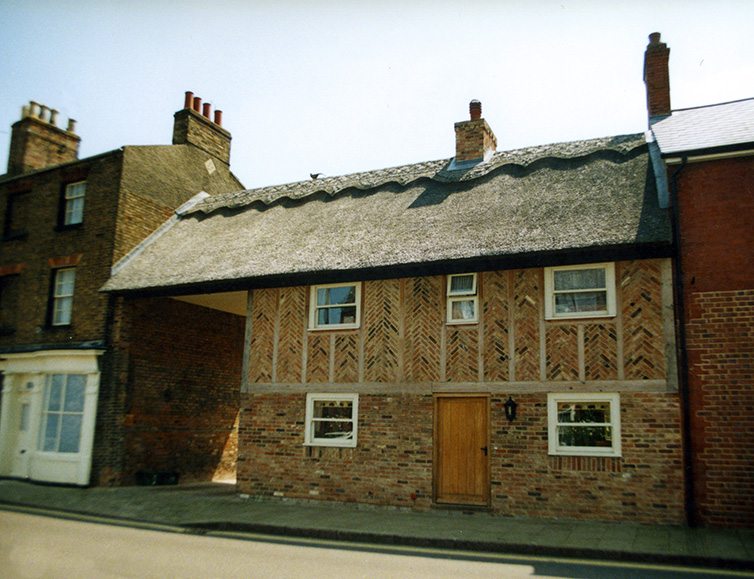 Renovated & new thatch… On the left, a new thatch, possibly of long straw, on a revamped cottage, at Crowland. Another attractive Lincolnshire town, with some scattered thatch. Including the attractive ‘infill’ above… 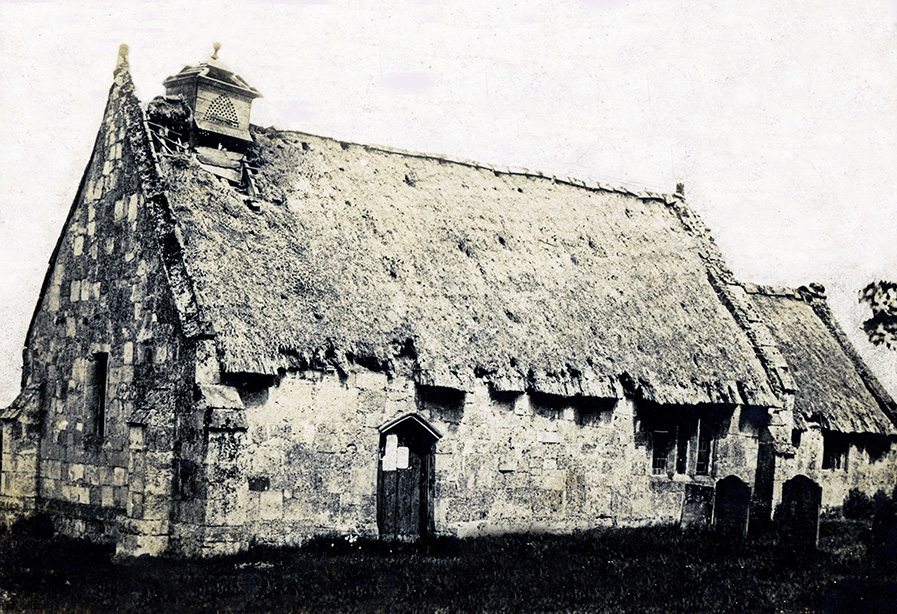 St Peter’s, at Markby… Strictly speaking, not a medieval church; as it dates from just after the Reformation. Being built from the remains of a Augustinian Priory, that once stood here. This old image, from 1900, shows a sorry sight. But happily, this church was restored in the 1960’s. It now has a neat roof of water reed. But is no longer topped with a tiled ridge. As this church obviously was, a century ago…

Finally, Bomber Command’s last sortie… Over time, thatch roofs have suffered destruction for some unusual motives. But none more bizarre, than the fate of a little thatched cottage, in Lincolnshire. For years, a landmark in the village of Dalderby… Teapot Hall, has already been examined in the History section, as it’s design was reminiscent, of a very early type of house. No walls as such, creating a tent like structure. It was examined, in the years before the First World War, by the architect Charles Innocent. Who was convinced it could not be younger, than the Middle Ages. A seventeenth century date, has also been suggested for this cottage. But the arguments are purely academic; as poor Teapot Hall was destroyed. As part of the celebrations, to mark the end of the Second World War… By none other, than the RAF. Well, to be honest, some rather inebriated members of that august service… It seems that on the night before VE Day, 7th May 1945, a group of airmen were making their unsteady way, back to RAF Coningsby. What induced them to set fire, to an empty roadside cottage, we’ll never know. However, they did and no doubt it made a rather spectacular celebration bonfire! The Horncastle fire brigade, spent four fruitless hours at the scene. A memory still fresh, for the youngest member of that fire team. The then seventeen year old, Russell Danby. 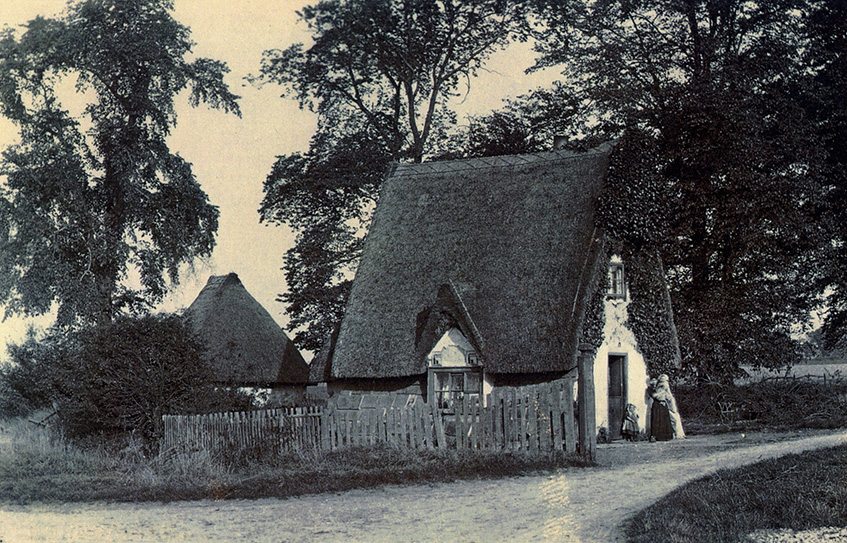 ”Teapot Hall, Teapot Hall, all roof and no wall”… A little too close to the road, to avoid the attentions of the RAF. This image was taken a half century before it’s destruction. Photo; courtesy David Holmes.

All this occurred some years before any official ‘listing’, protected such vulnerable buildings. In fact, as a page of the History section shows, (Click Here) it was all to easy, for officialdom to classify a humble cottage, as unfit for human habitation. Perhaps that’s why those happy airmen found an empty cottage to burn. Being just one of many condemned thatched buildings, then found in Britain.

Some years ago the above story was confirmed, as a result of my letter to the local Lincs. newspaper, requesting information. Thanks to all who kindly replied. Especially Russell Danby for his memories and David Holmes for his splendid photograph…