Tom Reeves and The White Bear & The Oldfield Brother's Cat 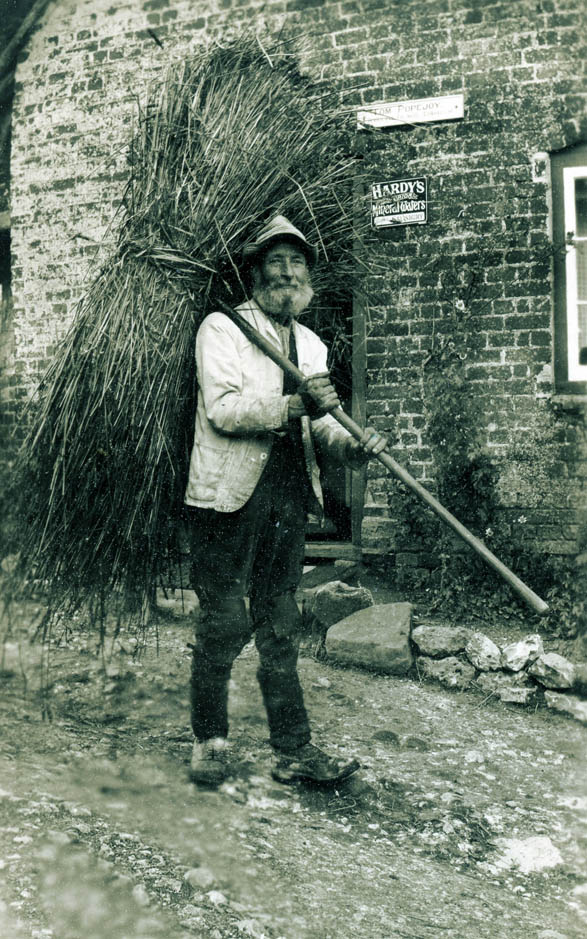 Traditional one man band... An Edwardian thatcher off to work, with his long straw thatch. However not every thatching business was run on similar lines... 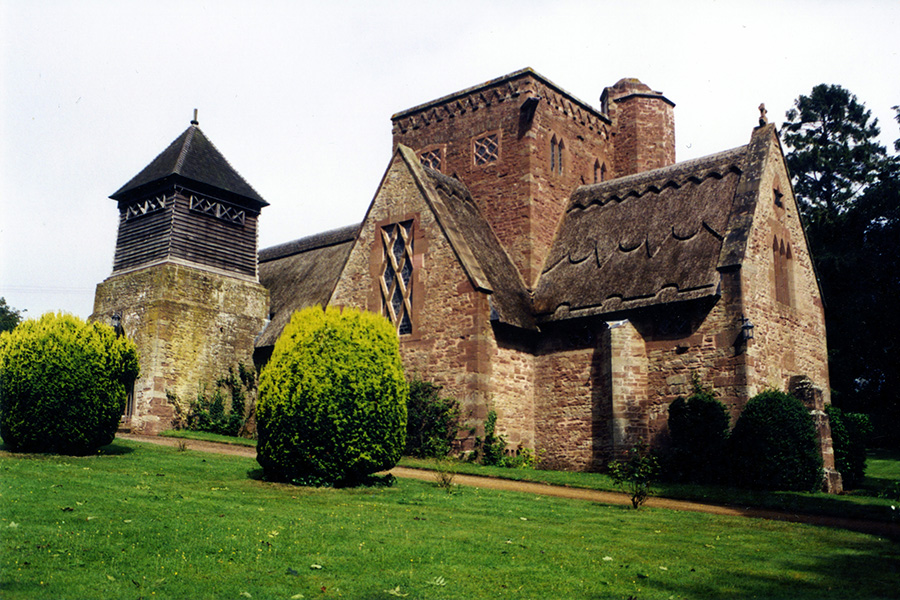 The Arts and Crafts church, above at Brockhampton in Herefordshire, now sports a faithful copy of the original thatch; first completed in 1902. This was and is first class work. But it does not follow the local thatching tradition, either in material or style; of plain, long straw work. And thus begs the question, of where did the thatch and the thatchers come from to carry out this job; in 1902?

From its style, it would seem that this work was carried out by some long distance thatchers; from East Anglia, close to the Norfolk Broads; making use of that resource for their thatching material.

In 1916 the author and architect Charles Innocent, called such workers 'Capitalist Thatchers'; who were found: ‘working in any part of the country'. And assumed these were a fairly recent novelty. But it appears non local work was being done for Queen Victoria, at Kew at least forty years before this. And possibly a century before, at Windsor; for her uncle the fourth King George.

The skill and reputation, of the craft in East Anglia and especially the ornate work carried out there; obviously had many admirers. As nearly all the old images, of this long distance work, are of water reed; with an ornate ridge.

This early, long distance travelling may come as a surprise to many, even those in the trade. Perhaps believing that easy communication, of people and goods, is a recent development; especially for an obscure craft such as thatching. But from Victorian times, an extensive railway system carried both materials and thatchers anywhere they wished to go; with ease. . 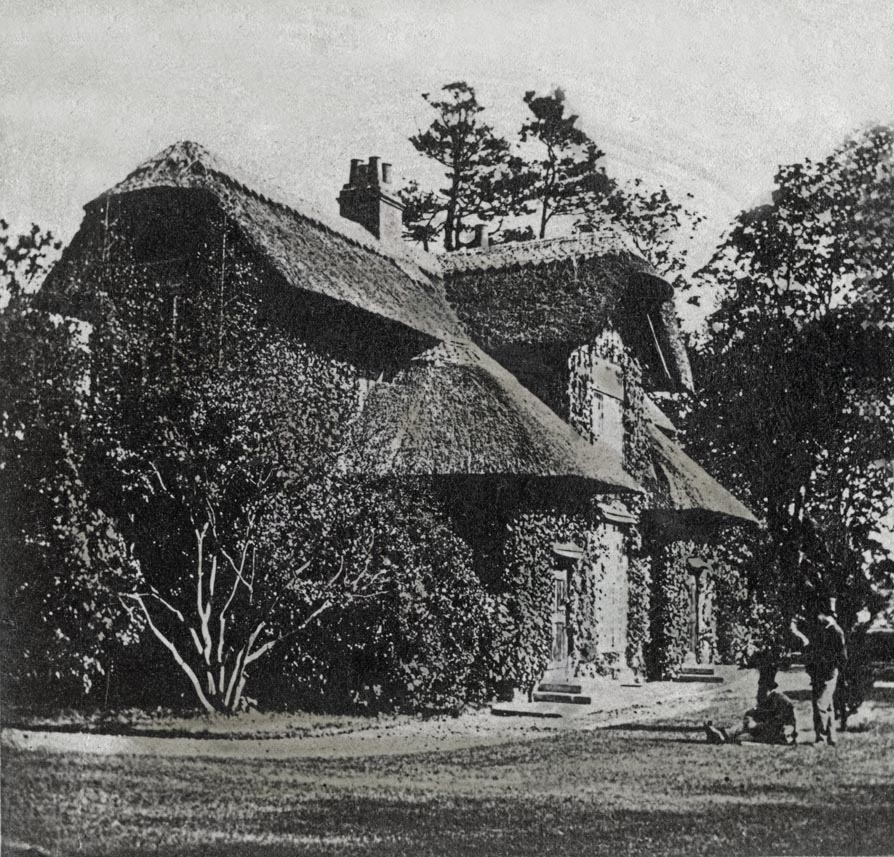 Royal thatch...The image above, from around 1870, depicts the Queen's Cottage, in Kew gardens;showing a water reed roof, with a fashionable ‘saw tooth’ ornamental ridge. This was almost certainly carried out by thatchers from East Anglia… Opposite is the spectacular Royal Lodge at Windsor; the creation of the Prince Regent, later king George IV. Once a smallish cottage, he had the building enlarged several times, employing a favoured architect John Nash. There is less detail shown here but this 1824 print does not show the edging, typical of long straw thatching. Thus perhaps Norfolk reeds were used. What suits one king, may not suit another, thus in 1830, when George’s brother William became king, he had virtually all the building demolished… 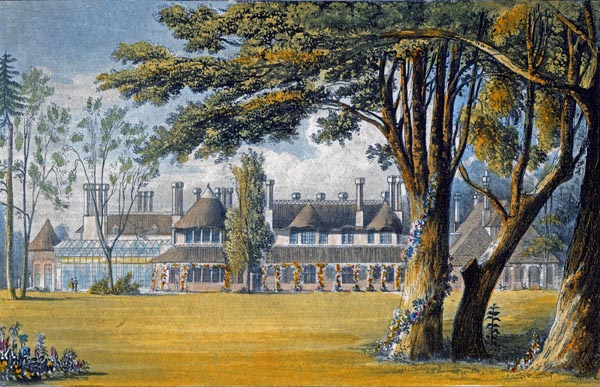 Tom Reeves and the White Bear... 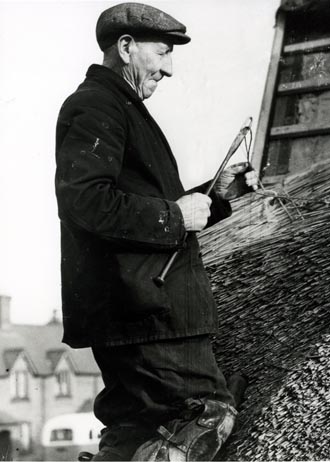 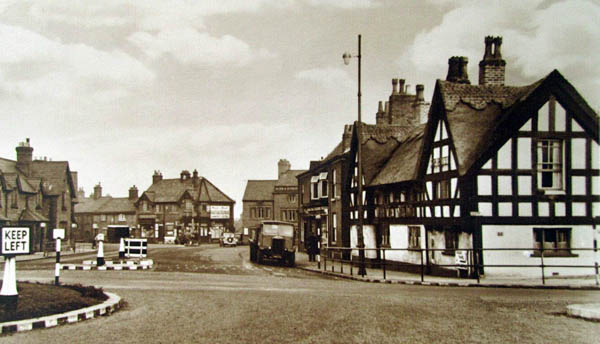 Away from home… Seventy two year old Tom Reeves. Thatching the ‘White Bear,’ at Knutsford in Cheshire; in 1947. With his son Leslie, he travelled from their home in Norwich, to work all over the country, using their own lorry. Until Tom got to work, this well known inn had been covered with long straw for centuries. Still under water reed the White Bear is still going strong... 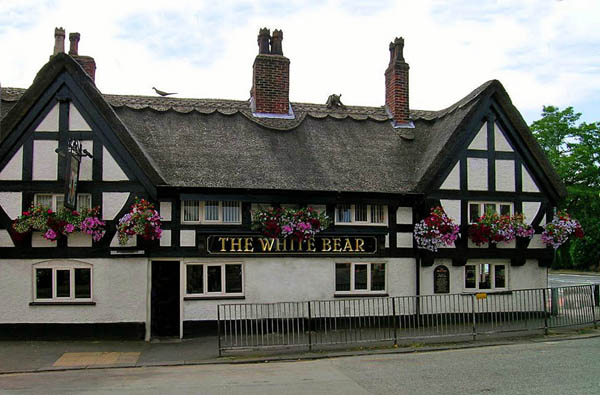 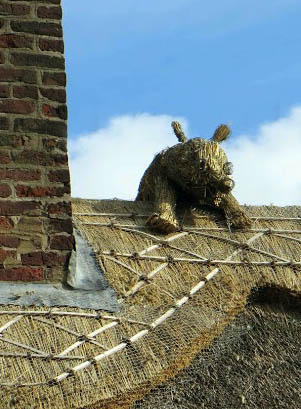 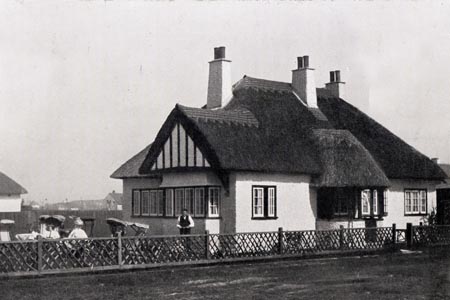 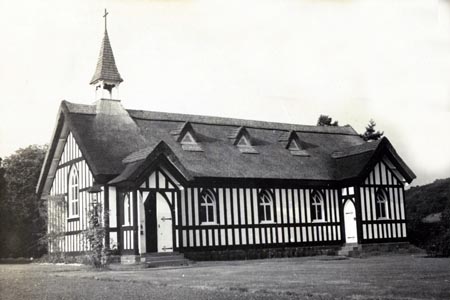 Out of Style…The left photo shows ‘The Thatched Cottage Tea House’, at Herne Bay in Kent, around 1905. No Kentish long straw thatching here; but water reed, probably from a hundred miles up the coast; from the Norfolk Broads. The right image dates from ‘August 22nd 1937’ and shows All Saints at Church Stretton in Shropshire. At this time the church was thirty five years old. And it looks as if the water reed thatch had just been replaced. 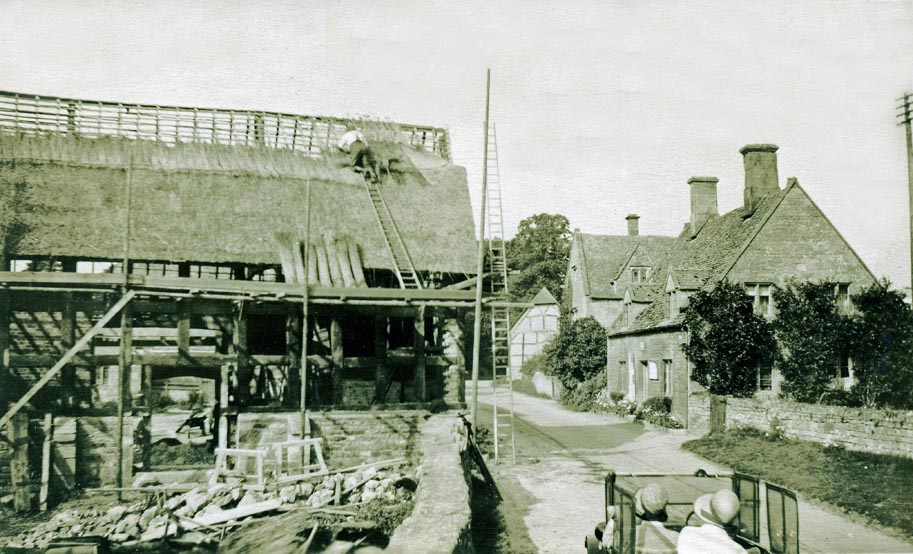 Snapped... The driver has left the two passengers in the car and captured a water reed job in progress; at Stanton in Gloucestershire. This Cotswold village is a long way from any reed beds... There seems to have ben a lot of building restoration hereabouts, the same photographer snapping the newly thatched barn, below, in the same location. The passengers cloche hats date this to around 1930... Below right is a thatcher's card from around the same period. 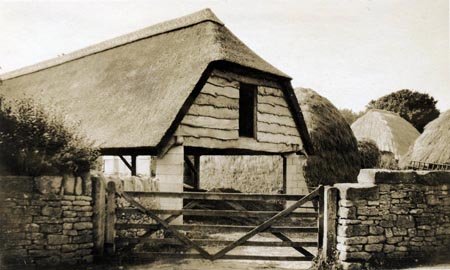 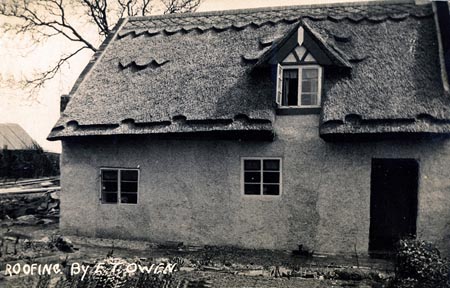 Out of favour… Opposite,‘The Bungalow’, at Rivington, near Chorley in Lancashire. This was one of a set of buildings created by Lord Leverhulme, the soap magnet; when he acquired this area in 1900. He was obviously rich enough, to transport thatchers and reed two hundred and fifty miles across England, probaly from Norfolk. But this roof lasted only a few years. As it fell prey to an arson attack, by a leading local suffragette; Mrs Edith Rigby doing the deed in July 1913. This building should not have been a target; as his Lordship supported their cause… 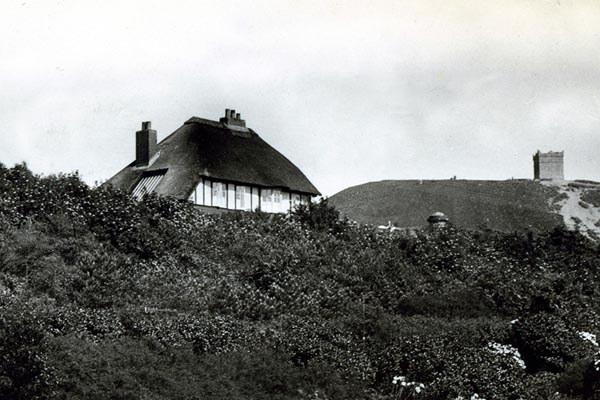 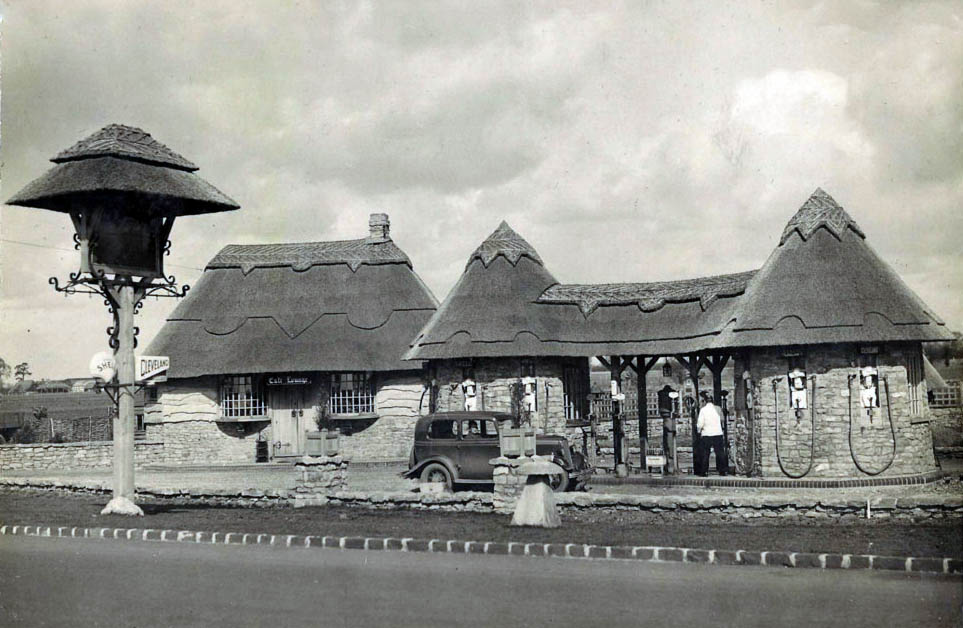 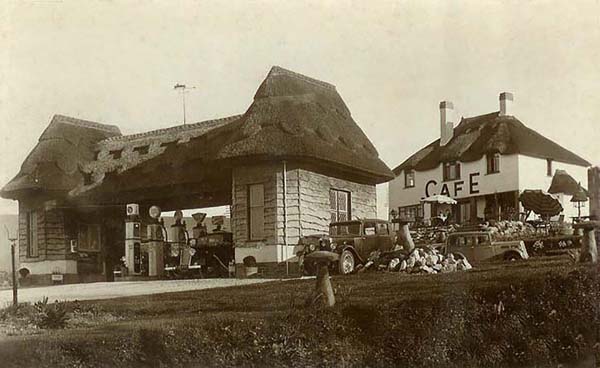 Petrol & Thatch... Don’t really mix; however at least two sets of pumps were roofed with Norfolk reed in the 1930’s. The top set, at Benson in Oxfordshire date from 1934. Once on the main Oxford to London road, this village was chosen as a site to build a KCB (Keep the Countryside Beautiful) Roadhouse, in operation until the Second World War. The cafe and petrol pumps did not succumb to their most obvious fate; but were demolished, when the runway at the adjacent airfield was extended in 1941… The 1930’s also saw a similar but larger thatched cafe and petrol station, at Haldon Hill near Exeter, on the main road to Plymouth and Torquay. The cafe being thatched with local combed wheat reed in a Devon style... But not the pumps. 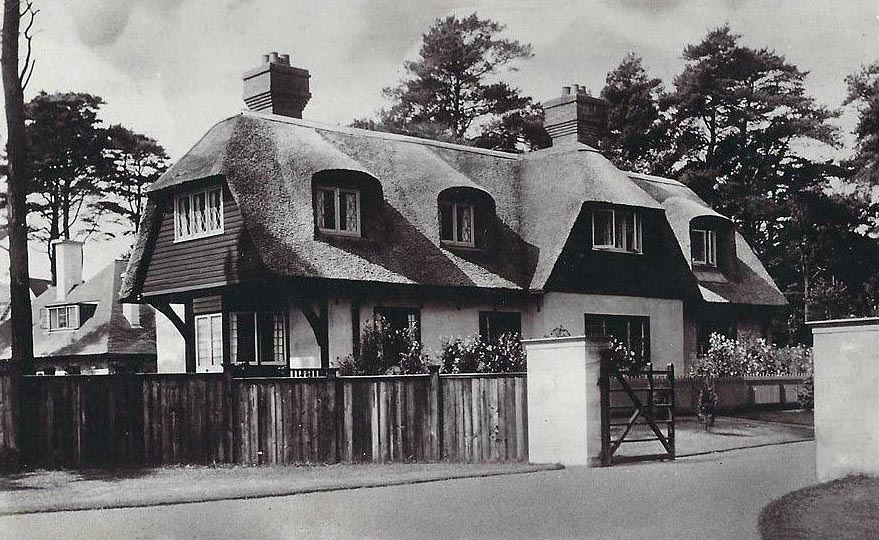 The deceptively modern looking, immaculate thatch above, is in fact around the same age as the Brockhampton church at the top of this page. House and thatch dating from the first years of the last century. A difference being that the above property lay at Troon in Ayrshire and is almost certainly coated with reed from the River Tay; a hundred miles or so on the far side of Scotland...

Another difference is that this thatch was topped with a mortar ridge; showing it was more than likely coated by thatchers near the Tay, in Fife or Perthshire... Not from East Anglia.

Thus like their English counterparts, it appears thatchers from near the abundant Tay reed beds, were employed to work on roofs well away from home. The Brough family being recorded working from around the time of the First World War, at Forthingall in Perthshire; to helping renovate cottages at Swanston and on thatch associated with Robert Burns, in the 1950’s. 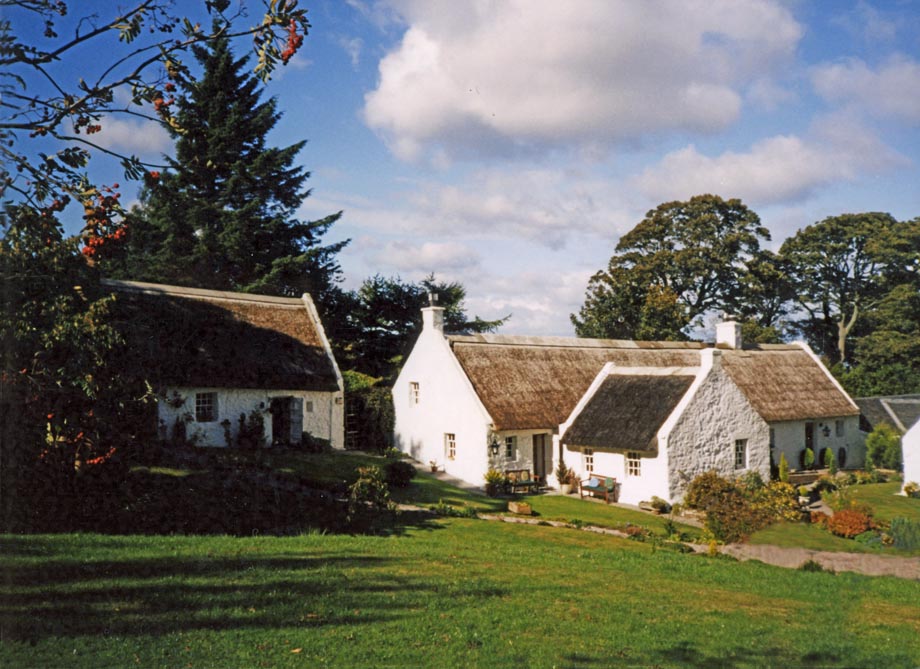 Above Swanston... In 1867 the Stevenson family took ‘Swanston Cottage’; on the southern edge of Edinburgh. Here their son Robert Louis, spent many happy summers, exploring the nearby seventeenth century, thatched hamlet. The cottages here were renovated in the mid 1950’s, with what remained of the straw and turf ridged roofs disappearing. The modern thatch still consists of Tay reeds, with a mortar topping. The original Tay reeds, for the cottages, in the opposite picture, of Fortingall, were hauled fifty miles up the Tay valley; well over a century ago. Fortingall was built in 1890-91 by shipowner and MP, Sir Donald Currie, who bought the village in 1885. The thatched cottages are good examples of the ‘arts and crafts’ style. But hardly traditional for central Perthshire... Click Here to view a page on thatch associated with Robert Burns. 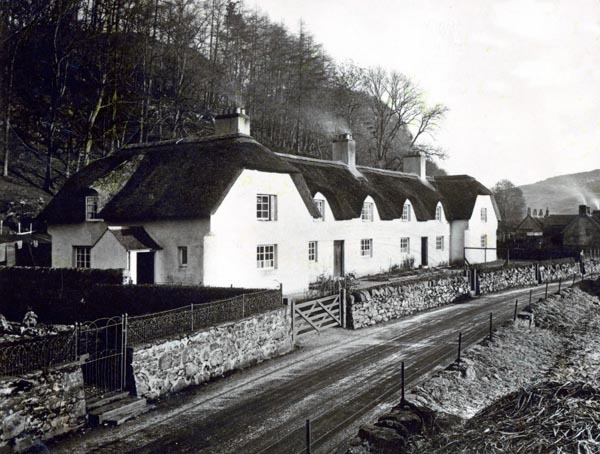 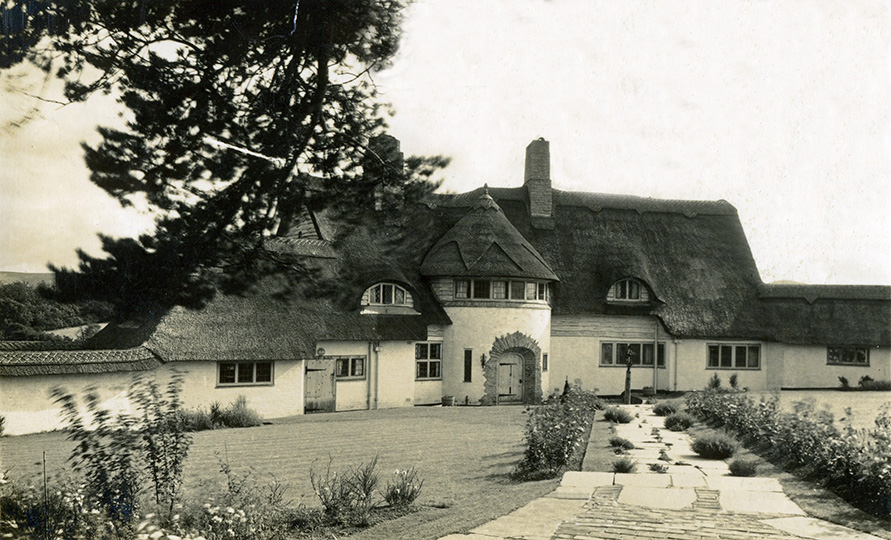 Norfolk or Tay?... Bolton Muir in East Lothian. It’s rare to find such architecture in this area…. This splendid building was designed by D.P. Hepworth, for a Colonel Thompson in 1929. This late example, of the ‘Arts & Crafts’ genre, gave the colonel many modern benefits, including a double thatched garage. The old image above shows the original thatch, newly completed. Possibly with Tay water reeds; but the extra decoration in the coatwork and the ornate ridge hints at work by East Anglian thatchers... Three likely suspects are found below. 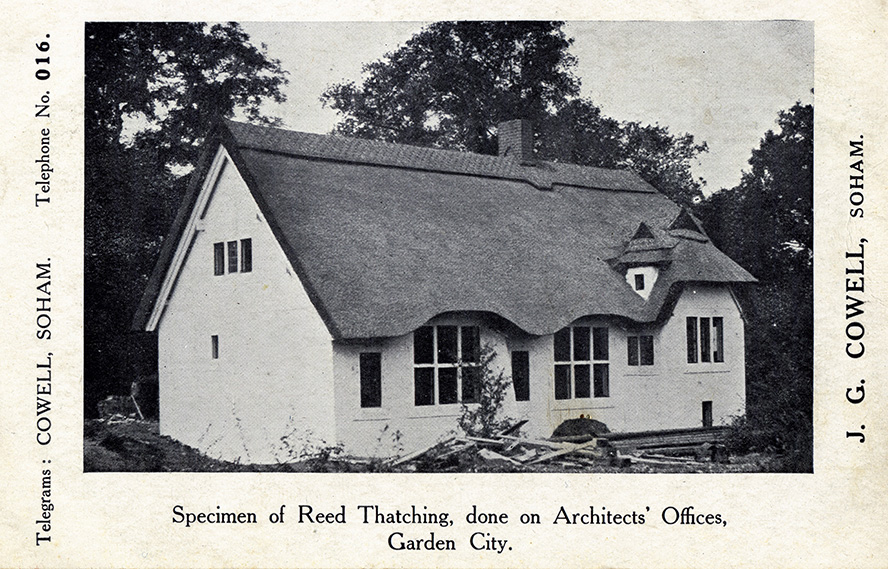 Mr J. G. Cowell, ran a sizable building buisness as well as a thatching one. The family firm thatched both in around their Cambridgeshire base and further afield; had a telegraph address and were on the telephone; in the days when this was a rarity.

The ‘Garden City’, mentioned on the above card, is the world’s first, at Letchworth, Hertfordshire. Begun in the first decade of the last century; many of its homes followed the ‘Arts and Crafts’ style and were thatched. Work that involved an eighty mile round trip, for these thatchers. The building on his card, originally the architect’s office, still stands as an attractive cottage… The cards below explain themselves; depicting long distance work in Sussex and Hampshire… 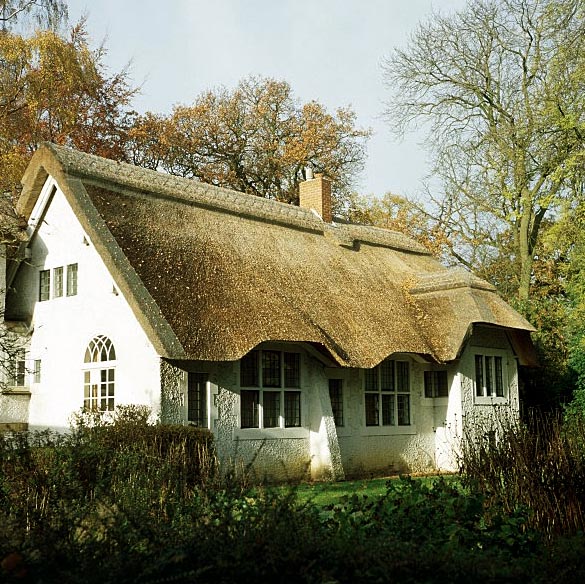 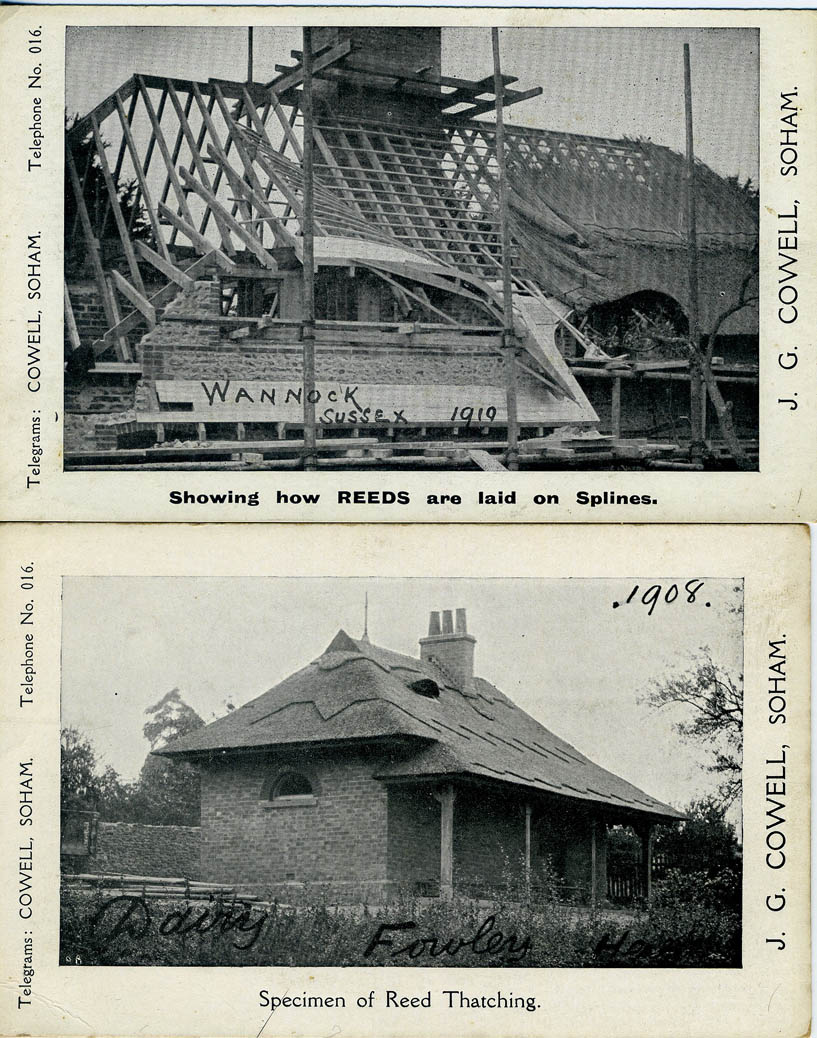 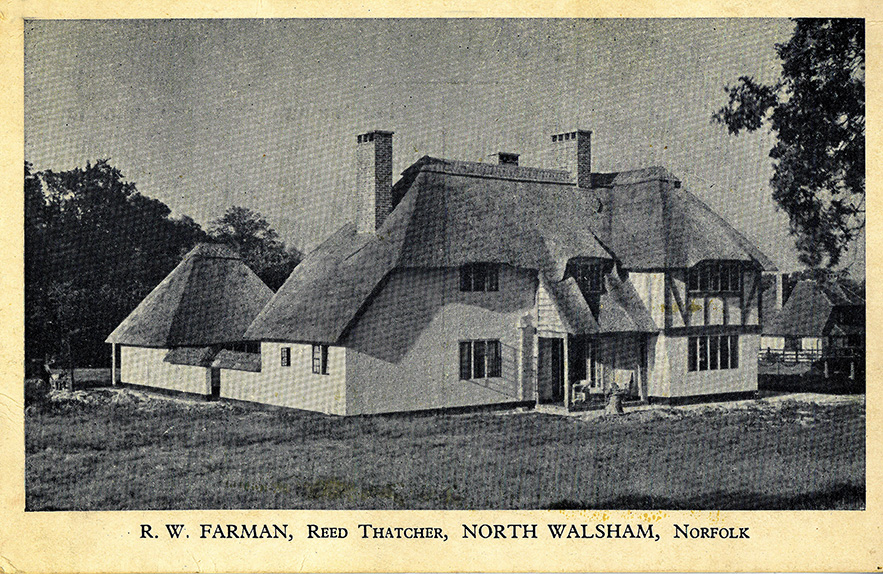 More Cards… This time from thatchers willing to carry out ‘Plain and Fancy’ Thatching. The late Victorian premises, shown opposite, state this on the sign; along with the other side of the business, basketmaking. The two strands of the firm lasted until at least the 1950’s; with some high end work, more fancy than plain, dipicted for both… 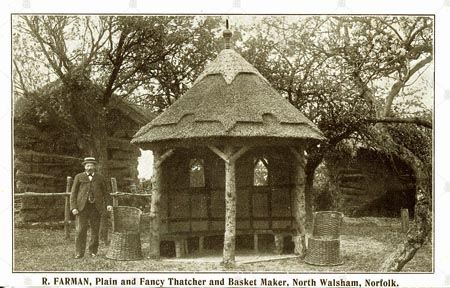 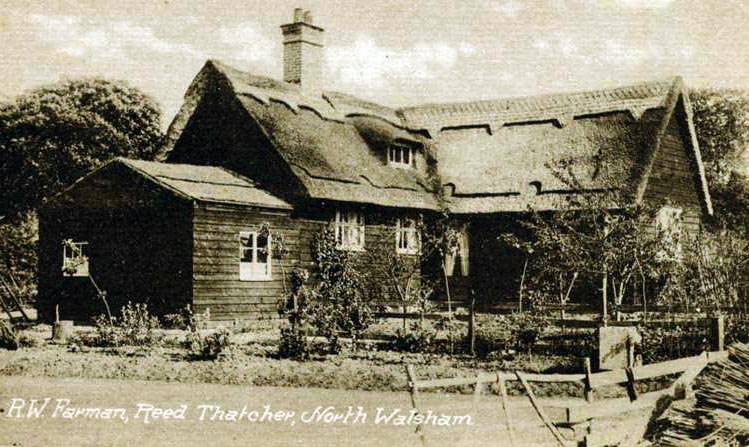 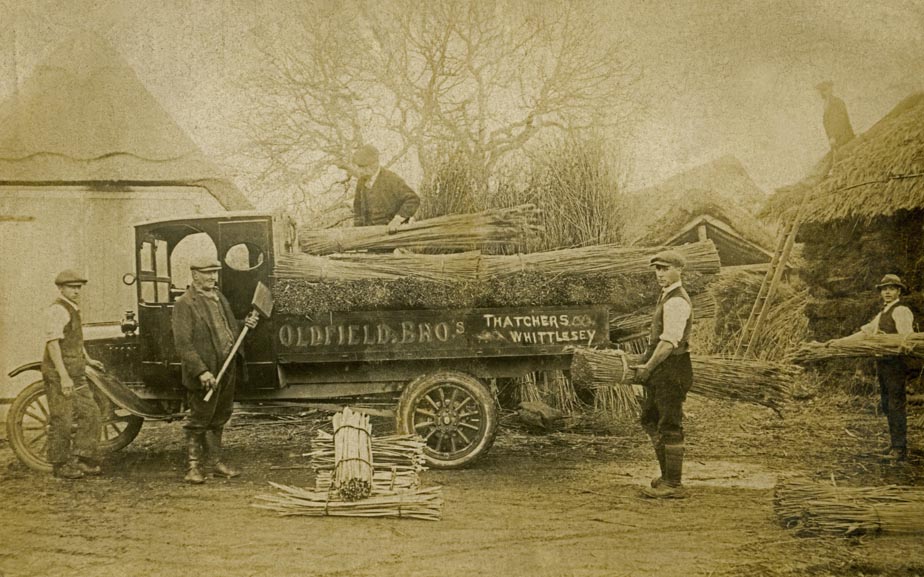 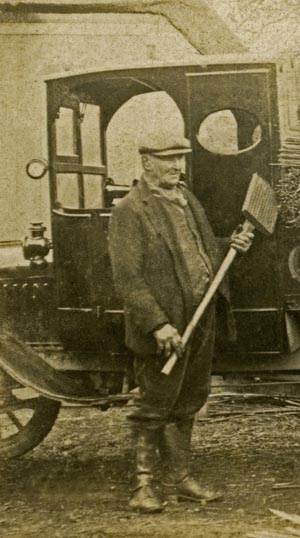 The Oldfield family, shown above in around 1925, practiced their craft hereabouts from at least the early eighteenth century. Then the huge Whittlesey Mere had extensive reedbeds; used by this family until it was drained in the 1850’s. This was a good material, in a 1932 newspaper interview, the Oldfield brothers stated they knew of extant roofs coated by their grandfather’s generation. Norfolk Reed was now used, laid for £5 a square.

With the acquisition of a motor lorry, the family firm started taking jobs far and wide, ‘from Devon to Lancashire to Kent’. Evidently the family cat decided to join one trip, enjoying a cosy ride to Sussex; hidden in the water reeds. Then having to be sent home, by train from Chichester….

Work on the Royal Estate at Sandringham in Norfolk, brought a Royal Warrant to this firm; as it often does today for modern thatchers… The premises, shown in the image, were occupied by this family firm, from around 1850 to the mid 1970’s…

Much of the above information, was gathered from a article by Geoff Oldfield, who sadly died in 2015.

The downside to all this travelling, now and in the past, has been the spread of the ‘Eastern’ thatching style and working methods; at the expense of more local traditions. And the creation of the myth, that all work in water reed, has to be done in this way…